Jennifer Aniston has revealed her father John Anthony Aniston passed away on Friday at the age of 89.

The actress, 53, took to Instagram to pay tribute to her dad with a slew of snaps of them together over the years.

John was also an actor who was best known for his role as Victor Kiriakis on Days of Our Lives, which he played from July 1985 and has played continually since then, including this year.

Sad news: Jennifer Aniston has revealed her father John Anthony Aniston passed away on Friday at the age of 89

Tribute: Jennifer wrote: ‘Sweet papa…⁣ John Anthony Aniston. You were one of the most beautiful humans I ever knew’

John shared Jennifer with his ex-wife Nancy Dow, who passed away in May 2016.

After 11 years of marriage, he walked out on Nancy in 1979, when Jennifer was ten years old.

Jennifer spoke about the incident in 1999 in an interview with Rolling Stone, saying it was the most ‘painful’ time of her life.

She said: ‘My mom told me. I went to a birthday party, and when I came back, she said, “Your father’s not going to be around here for a little while.” 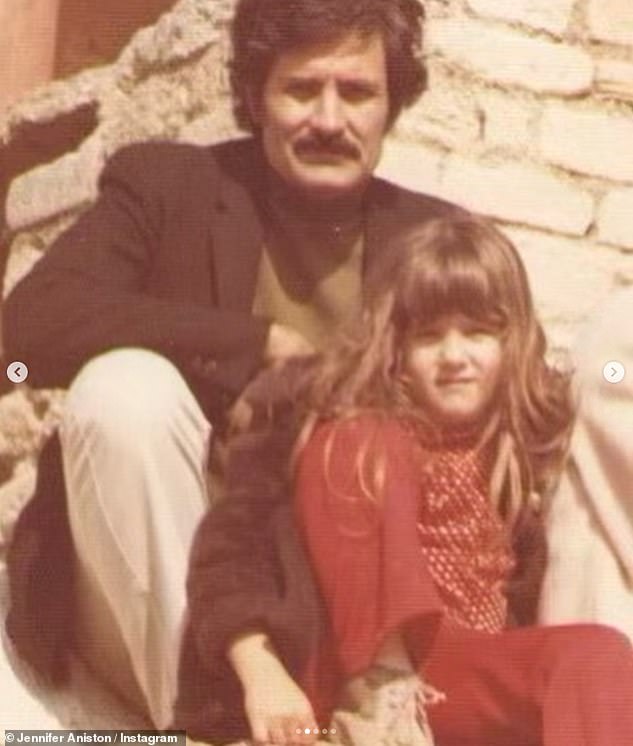 Childhood photo: The actress, 53, took to Instagram to pay tribute to her dad with a slew of snaps of them together over the years

‘She didn’t say he was gone forever. I don’t know if I blocked it, but I just remember sitting there, crying, not understanding that he was gone.

‘I don’t know what I did later that night or the next day. I don’t remember anything other than it being odd that all of a sudden my father wasn’t there. And he was gone for a while. About a year.’

She revealed she never heard from him once during that period, and explained: ‘He just called one day and said, “Let’s go see The Fantastickes.”

‘So we had a little dinner and saw the show. After that, I started seeing him on weekends, and this new way of life just unfolded.’

Jennifer said she was desperate to please him so he wouldn’t leave her again and that she asked him why he left. 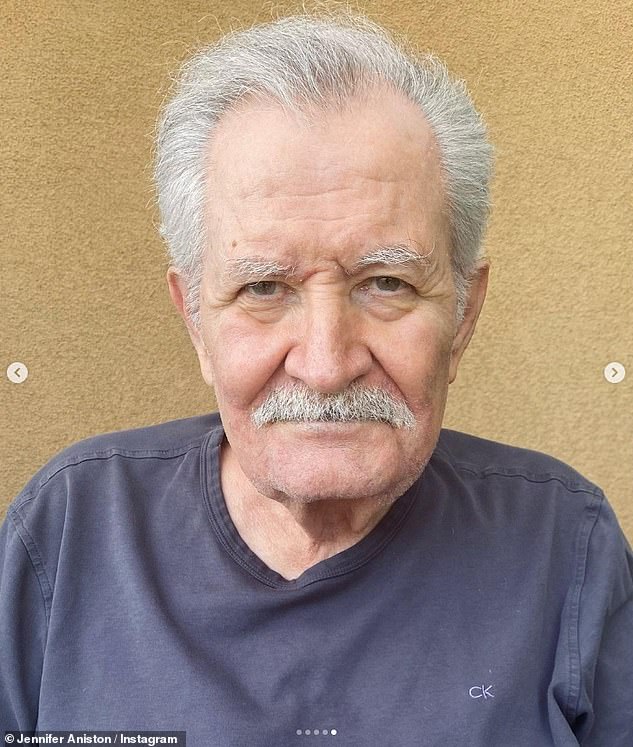 Chip off the old block: John was an actor who was best known for his role as Victor Kiriakis on Days of Our Lives, which he played from July 1985

‘Like I said, he’s not a good communicator. Maybe if my parents had talked more. There were signs, but also, knowing my father, he probably didn’t say anything.

‘But, as best he could, my dad explained and apologized, and it’s enough. We’ve made up. There’s still parts that are hard for me, but I’m an adult. I can’t blame my parents anymore.’

She described her father as ‘Tall, six feet two inches; a gentle giant, really. One of the nicest men you’ll ever meet. Unbelievably shy and funny.’

In 2020, The Mail on Sunday reported that Jennifer had reconciled with her father and had rang him every day during the pandemic.

A source said: ‘Jen forgave her father for walking out a long time ago. But their relationship has had its ups and downs.

‘Jennifer didn’t speak to him for ages. But since the coronavirus crisis she has been on the phone almost every day. And not just brief conversations.’ 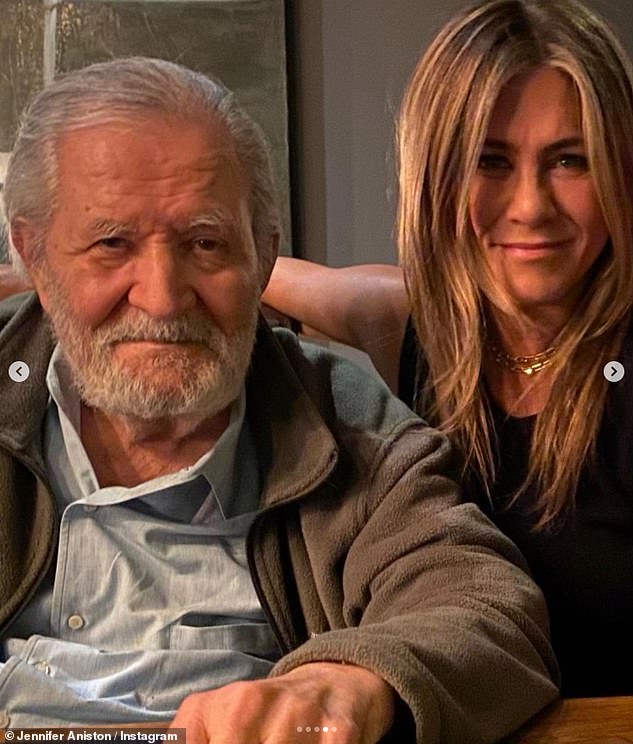 Candid: Her father’s passing comes after Jennifer spoke about the pain of her parents’ divorce and forgiving both her mother and father later in life

The insider added: ‘It’s like she has realised life is very short and she wants her relationship with John to be the best it can be. He’s thrilled that they have reconciled.’

In her tribute, Jennifer wrote: ‘Sweet papa…⁣ John Anthony Aniston. You were one of the most beautiful humans I ever knew.

‘I am so grateful that you went soaring into the heavens in peace – and without pain. And on 11/11 no less!

‘You always had perfect timing. That number will forever hold an even greater meaning for me now. I’ll love you till the end of time.’

She added: ‘Don’t forget to visit.’

John also had a son, Alexander, with his second wife, Sherry Rooney whom he met while co-starring on Love of Life.

In an interview several years ago, John was asked how he would like to be remembered.

After thinking about it for a moment, he replied simply, ‘He was a good actor.’

Her father’s passing comes after Jennifer spoke about the pain of her parents’ divorce and forgiving both her mother and father later in life.

Speaking to Allure last week, she said: ‘I think my mom’s divorce really screwed her up.’

But after years of reflection, she’s now able to see some of the limitations someone from her mother’ generation had to go through.

‘Back in that generation it wasn’t like, “Go to therapy, talk to somebody. Why don’t you start microdosing?” You’re going through life and picking up your child with tears on your face and you don’t have any help,’ she added, in an apparent reference to her mother’s situation.

‘I forgave my mom. I forgave my father. I’ve forgiven my family,’ Jennifer revealed, which is a big deal considering she had been estranged from her mother for years.

Having now reaped the benefits of forgiveness, The Morning Show star said she now knows herself how ‘important’ it is to let go of hurtful moments wrapped up in resentment.

She said: ‘It’s toxic to have that resentment, that anger. I learned that by watching my mom never let go of it.

‘ I remember saying, “Thank you for showing me what never to be”. ‘So that’s what I mean about taking the darker things that happen in our lives, the not-so-happy moments, and trying to find places to honor them because of what they have given to us.’

The actress went on to an example of those benefits by confessing that she got the motivation to leave her family’s home, which she described as ‘not a fun house to live in’, as a result of her parents’ divorce.

‘I was thrilled to get out,’ she said of the family’s apartment in New York City. 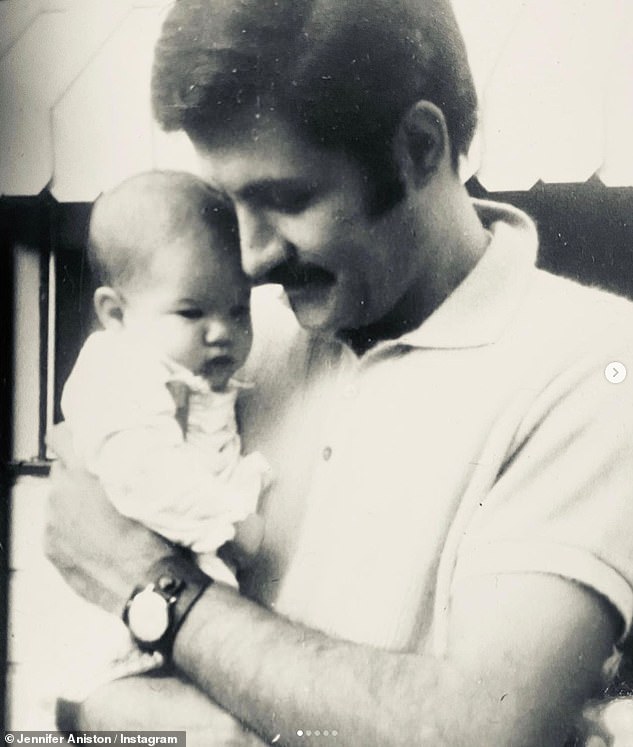 Forgiveness: She said: ‘I forgave my mom. I forgave my father. I’ve forgiven my family,’ Jennifer revealed, which is a big deal considering she had been estranged from her mother for years