The ‘JetBlue effect’: U.S carrier’s introduction of routes from New York and Boston to London may drive down fares on OTHER airlines by 12%

Flights from New York and Boston to London on all airlines could become 12 per cent cheaper thanks to the ‘JetBlue effect’.

The U.S.-based carrier, known for low fares, announced earlier this week it will be introducing routes between the two US cities and the British capital from 2021.

And according to new research, when JetBlue starts new international routes, it usually drives down prices on other airlines flying the same service.

Flights from New York and Boston to London on all airlines could become 12 per cent cheaper thanks to the ‘JetBlue effect’, researchers have said

The study was carried out by travel comparison site Hopper, which noted that historically, when JetBlue enters an international market, fares plummet by on average 12 per cent

Thought it can be even more.

Hopper pointed out that when the carrier launched flights from Fort Lauderdale and New York’s JFK to Trinidad and Tobago, it spurred savings on all airlines of up to 26 per cent.

Hayley Berg, an economist at Hopper, said: ‘Historically, JetBlue has caused prices to drop by 12 per cent when it enters an international market, so we’re expecting a comparable drop once it starts servicing flights to London.

‘It’s rumoured that the company may announce more routes to European destinations such as Paris, Amsterdam, and Dublin. 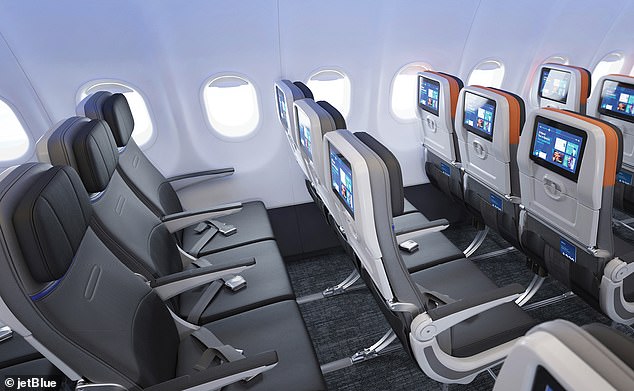 Inside a JetBlue economy cabin. It offers the best legroom in economy out of all US carriers at 34 inches

‘We’re already observing historically low prices to Europe with prices averaging $637 (£487) round-trip from US origins this spring. If JetBlue does enter additional European markets, the competition will push down those prices even further.’

According to Hopper, flight prices between New York and Boston to London have already been falling.

Its data shows that for summer 2019, New York leisure travellers should currently expect to pay $597 (£456) return for flights to London.

This is because prices are down four per cent compared to last year and 17 per cent since 2017.

Hopper adds that those travelling from Boston should expect to pay $577 (£441) for a return to London. 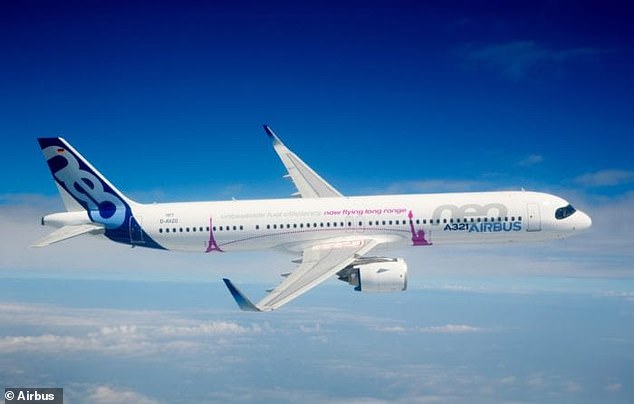 The new JetBlue routes will be served by Airbus A321LR single-aisle aircraft featuring a version of the carrier’s premium cabin, Mint

The new JetBlue routes will be served by Airbus A321LR single-aisle aircraft featuring a version of the carrier’s premium cabin, Mint. It is not known how much the flights will cost.

JetBlue offers the biggest legroom out of any American carrier in economy, at 34 inches.

The airline currently operates an average of more than 1,000 flights per day to destinations in the US, Caribbean and Latin America.