Jo Swinson has accused Jeremy Corbyn of ‘jeopardising’ the chances of a Remainer alliance blocking a No Deal Brexit after Labour attacked the Lib Dem leader and labelled her ‘petulant’ ahead of crunch talks today.

Opposition leaders are due to meet in Westminster to look at how they can stop the UK leaving the EU without an agreement on October 31 after Mr Corbyn invited them to a summit.

But the alliance risked unravelling before the senior MPs even meet after the Labour leader and Ms Swinson clashed.

Mr Corbyn wants MPs to back his plan to stop No Deal which would see Boris Johnson toppled in a vote of no confidence and the Labour leader then becoming caretaker PM.

He would ask the EU to delay Brexit beyond the Halloween deadline and then call a general election.

But Ms Swinson and many other MPs are deeply sceptical about whether he could win a majority in the House of Commons.

She has sent the Labour leader a letter yesterday in which she said his insistence that it must be him who forms a temporary government ‘will therefore jeopardise the chances of a no confidence vote gaining enough support to pass in the first place’.

Ms Swinson wants Mr Corbyn to guarantee that he will back a less divisive candidate in the event he falls short.

But Mr Corbyn has resisted the call and his ally, shadow international trade secretary Barry Gardiner, accused Ms Swinson of being ‘petulant’.

Ian Blackford, the Westminster leader of the SNP who will attend the summit, said he was willing to ‘work with anybody and everybody’ to stop No Deal as he said ‘it’s not about who becomes prime minister in the short-term’.

Jeremy Corbyn, pictured in Keswick on August 22, will meet with other opposition leaders tomorrow to try to formulate a plan to stop a No Deal Brexit 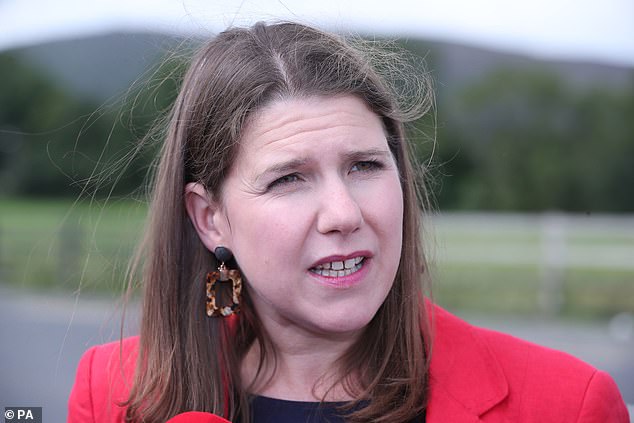 But the Remain alliance was at risk of falling apart today after Jo Swinson, pictured earlier this month, said Mr Corbyn’s proposal of him becoming caretaker PM would never work

Tomorrow’s summit will represent a major moment in the battle to stop a chaotic split on October 31.

Mr Johnson has said he will deliver Brexit by that date with or without a deal but many MPs are vehemently opposed to Britain leaving the EU without an agreement.

Senior Tory rebel MPs were invited to the talks but most are not expected to attend in a sign of how hard it could be to corral enough votes to oust Mr Johnson.

Ms Swinson said in her letter to Mr Corbyn: ‘In the last week many MPs who stand opposed to No Deal, in particular key Conservative MPs, have rejected your proposal to lead an emergency government.

‘Insisting you lead that emergency government will therefore jeopardise the chances of a no confidence vote gaining enough support to pass in the first place.

‘As you have said that you would do anything to avoid No Deal, I hope you are open to a discussion about how conceding this point may open the door to a No Confidence vote succeeding. Its success must be the priority.’

She wants leaders to agree a strategy for how MPs will be able to take control of Commons proceedings, to plan an alternative strategy for a successful vote of no confidence, to discuss how best to form an emergency government and to clarify each party’s Brexit stance.

The last point is aimed at Mr Corbyn who has been accused of sitting on the fence over whether Labour wants the UK to remain in the EU.

He told Sky News yesterday: ‘I think it was extremely petulant of Jo Swinson to come out and dismiss this the other day. 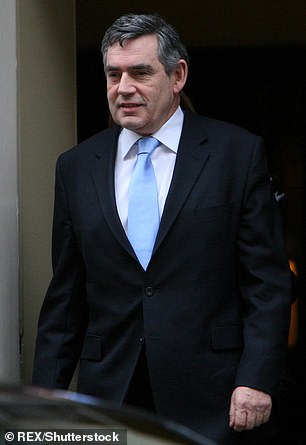 ‘It sounded as if she couldn’t take yes for an answer because she has been saying, and the Liberal Democrats and others have been saying for so long: “Look, we need to have a second referendum and remain needs to be on the ballot paper”.

‘They are now being offered a fail safe parliamentary procedural way of delivering that and they’re saying: “Oh well, we are not going to cooperate if Jeremy Corbyn is going to be the person who does it”.’

The row over how best to stop No Deal came as Labour former prime minister Gordon Brown urged Parliament to order an independent inquiry into the consequences of a No Deal Brexit.

He urged MPs to focus their efforts in the coming weeks on seizing control of the Commons agenda.

He told BBC Radio 4’s Today programme: ‘I think what they should do is agree that they take over the business of the House of Commons for a day, as they did before, pass a law that says that the Government must instruct and produce an independent report on the consequences of a No Deal.

‘And that should be before the House of Commons before we ever go ahead. That would be a sensible way forward.’