Joe Biden has suggested that police should be trained to shoot suspects in the leg instead of the heart in an effort to reduce the numbers of people killed by police.

‘Instead of standing there and teaching a cop when there’s an unarmed person coming at ’em with a knife or something, shoot ’em in the leg instead of in the heart,’ the former vice president said during an address to black community leaders in Wilmington, Delaware on Monday.

‘There are a lot of things that can change regarding police training,’ Biden continued. 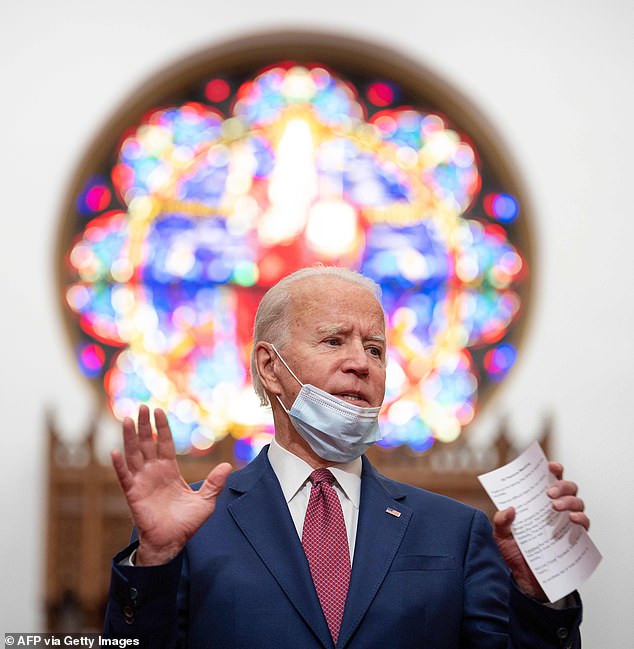 Biden spoke to black community leaders in a church in Wilmington, Delaware

His comments of urging cops to practice a policy of ‘shoot-to-wound’ rather than ‘shoot-to-kill’ come after five days of protests after the death of George Floyd last Monday.

So far, it’s believed up to ten people have been killed in the riots and protests that have followed.

During his address, Biden spoke of his time when he worked in the Obama administration.

‘We set up, in the Justice Department, the ability for the Civil Rights Division to go in and look at the practices and policies of police departments. That’s why we were able to stop stop-and-frisk. 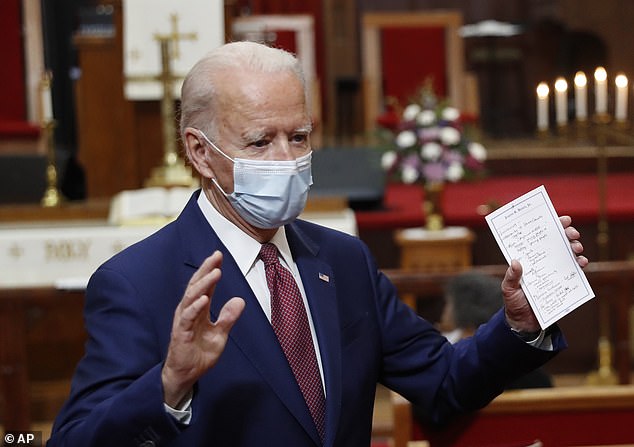 ‘I would re-establish that with more teeth in it. Because we also have to fundamentally change the way in which police are trained,’ he said.

Biden’s record on law and order has been far from perfect.

He came under criticism after being at the forefront of the 1994 Violent Crime Control and Law Enforcement Act.

It saw the death penalty expanded and drove the number of incarcerations up after encouraging tougher rules, according to Fox News.

Last year, Biden ended up apologizing for views he had previously held on criminal justice and is now proposing to repeal some of the parts of the 1994 law giving second chances to those who are in jail and eliminating racial disparities. 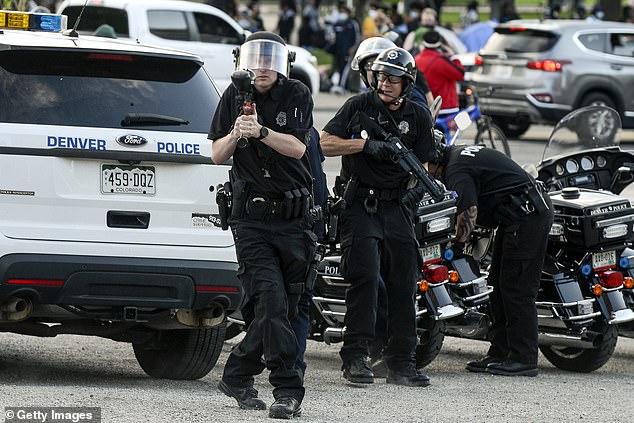 A police officer aims a pepper ball gun at people during a protest on Friday in Denver, Colorado. Demonstrations are being held across the US after George Floyd died in police custody last Monday in Minneapolis, Minnesota

The presumptive Democratic presidential nominee offered emotional support and promised bold action during the in-person discussion with black leaders in Delaware and a subsequent virtual meeting with big-city mayors who are grappling with racial tensions and frustrated by a lack of federal support.

‘Hate just hides. It doesn´t go away, and when you have somebody in power who breathes oxygen into the hate under the rocks, it comes out from under the rocks,’ Biden told more than a dozen African American leaders gathered at a church in downtown Wilmington, his face mask lowered around his chin as he spoke.

Without offering specifics, he promised to ‘deal with institutional racism’ and set up a police oversight body in his first 100 days in office, if elected. The former vice president also said he’d be releasing an economic plan focused on education, housing and ‘access to capital’ and investments, especially for minority Americans, later this month.

‘I really do believe that the blinders have been taken off. I think this tidal wave is moving,’ Biden told the mayors of Atlanta, Chicago, Los Angeles and St. Paul, Minnesota. ‘I realize we´ve got to do something big, we can do it, and everyone will benefit from it.’

Largely sheltering in place amid the coronavirus, Biden has struggled in recent weeks to be heard from his makeshift home TV studio over the noise of dueling national crises. But after another night of violent protests, he ventured out into public for the second time in two days and just the third time since the pandemic arrived in mid-March.

His hopeful and collaborative approach marked a sharp contrast to that of President Donald Trump, who has made little effort to unify the country. The Republican president slammed governors as ‘weak’ during a video teleconference on Monday and demanded tougher crackdowns on protesters. Trump also lashed out at Biden on Twitter, writing that ‘Sleepy Joe Biden´s people are so Radical Left that they are working to get the Anarchists out of jail, and probably more.’