John Bercow could bypass Boris Johnson and recall MPs himself

John Bercow could bypass Boris Johnson and recall Parliament himself if the Prime Minister loses his legal battle over prorogation, the Supreme Court heard yesterday.

Britain’s top judges will give their verdict in the highly contentious case next week after three days of legal argument which finished on Thursday.

Lord Pannick QC, representing Remainer activist Gina Miller, suggested the court could find the prorogation unlawful but then leave it to Parliament to decide what happens next.

In that case, the Commons Speaker and his counterpart in the Lords may be entitled to re-open Parliament themselves, Lord Pannick said.

The Government has indicated it may try to prorogue again if it loses the case. 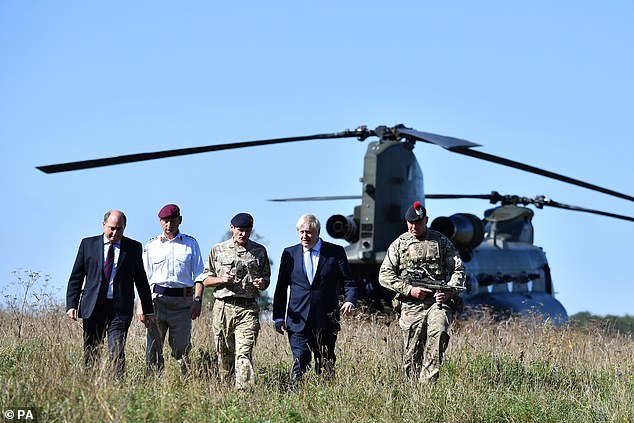 Prime Minister Boris Johnson, pictured on a visit to Salisbury Plain yesterday, has been accused of misleading the Queen over his controversial suspension of Parliament

In his closing remarks yesterday Lord Pannick said: ‘The remedy we seek from the court is a declaration that the Prime Minister’s advice to Her Majesty was unlawful.

‘We would respectfully ask the court, if it is in our favour, to make such a declaration as soon as possible… because time is of the essence.’

Lord Pannick said the proper course for the court ‘in these unusual and difficult circumstances (is) to let Parliament sort out the problem’.

The Speaker and Lord Speaker could ‘take action to ensure that parliament reopens as soon as possible next week’, he said.

The court could find that Parliament was never properly prorogued and so has remained in session all along.

However, it could also rule Mr Johnson’s actions unlawful without ordering a recall of MPs.

The Speaker has the power to do that, although he usually does so on the advice of the Government. But parliamentary rules have proven flexible in recent months and Mr Bercow has shown particular flexibility.

The Speaker has called the prorogation a ‘constitutional outrage’ and repeated that claim on a visit to Zurich yesterday.

Mr Johnson’s lawyers argue that the suspension of Parliament was a political matter beyond the remit of the courts.

But his opponents say he misled the Queen and intended the prorogation to stop Parliament interfering in the Brexit process before October 31. 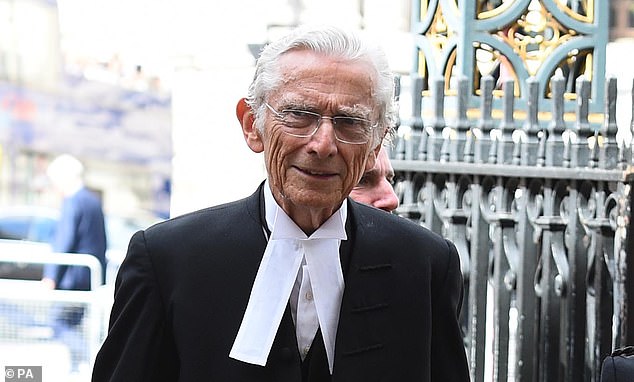 Lord Fowler (pictured), who is Lord Speaker and Mr Bercow’s counterpart in the House of Lords, could also play a role in re-opening Parliament 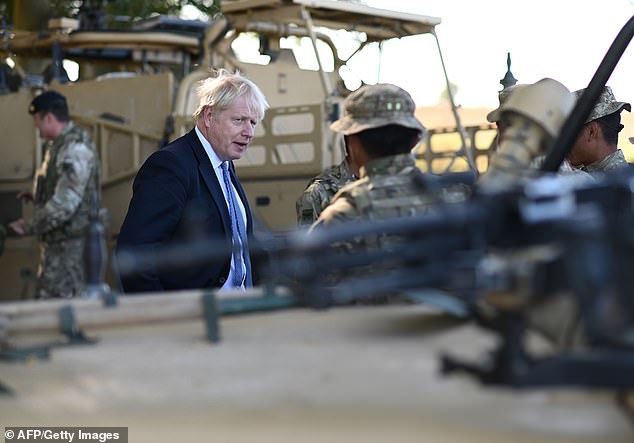 Lord Pannick told the court that ‘this five-week prorogation has prevented Parliament from carrying out its scrutiny functions over the executive over a period of exceptional length… for no rational reason.’

At the close of the unprecedented hearing on Thursday, the court’s president Lady Hale said the judges hope to give their decision early next week.

She said: ‘I must repeat that this case is not about when and on what terms the United Kingdom leaves the European Union.

‘The result of this case will not determine that. We are solely concerned with the lawfulness of the Prime Minister’s decision to advise Her Majesty to prorogue Parliament on the dates in question.

‘As we have heard, it is not a simple question and we will now carefully consider all the arguments that have been presented to us.’

Documents submitted to the court on Mr Johnson’s behalf reveal three possible scenarios in the event that the Government loses the case.

The first envisages a situation where the judges find it was unlawful, but their reasoning leaves open the possibility that Parliament could be prorogued for the same length of time in a lawful manner.

The document, submitted by Sir James Eadie QC and Advocate General for Scotland Lord Keen, states: ‘In that scenario, the court would and could not make any order purporting to require Parliament to be reconvened… Parliament would remain prorogued.’ 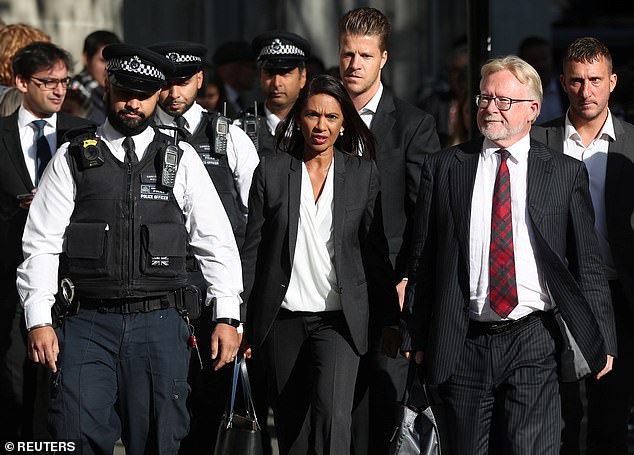 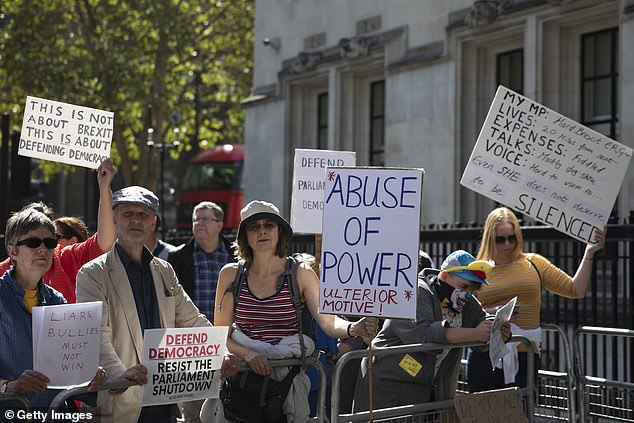 The second possible outcome is that the court could find the suspension was unlawful and that the recall of Parliament before October 14 is the ‘only option lawfully open to the Prime Minister’.

In this scenario, the document states Mr Johnson would comply with the terms of the ruling, but that it would also be ‘open to the court to consider whether to make a mandatory order’.

However, Mr Johnson’s lawyers urge the court to consider the ‘very serious practical consequences’ as the recall of Parliament would require a meeting of the Privy Council and a new Queen’s Speech.

The document continues: ‘A Queen’s Speech, and the State Opening of Parliament which accompanies it, is a significant political, constitutional and ceremonial occasion, which ordinarily involves the Sovereign attending in person.

‘As the court will be well aware, the proper preparations for a Queen’s Speech are a matter of thoroughgoing importance, including in relation to the content of that Speech.

‘Extensive arrangements would have to be made, including as to security, to enable this to occur.

‘These considerations lead to the need for any order that the court makes, if necessary, to allow for these steps relating to the earlier meeting of Parliament to occur in an orderly fashion.’

In the third possible outcome, the document states the court could rule that the prorogation was unlawful, with the effect that Parliament was not prorogued and remains in session.

The Supreme Court is hearing an appeal against rulings in London and Edinburgh – which produced different results. 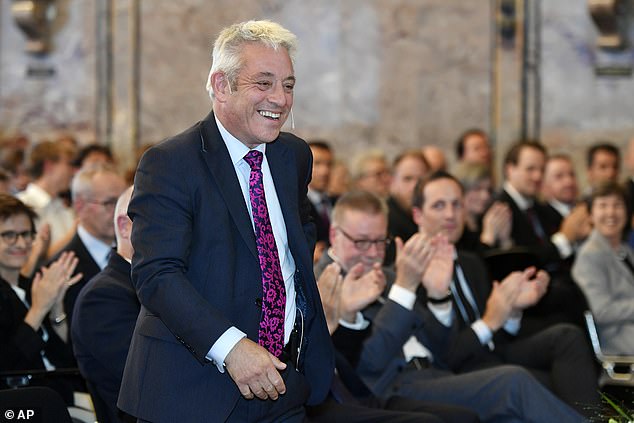 At the High Court in London, judges agreed with the Government’s reasoning and rejected Gina Miller’s challenge.

But in Scotland, a cross-party group of MPs and peers led by SNP MP Joanna Cherry QC won a ruling that the suspension was unlawful.

On Thursday, Sir John’s QC Lord Garnier told the court his intervention was ‘nothing to do with the arguments for or against Brexit’.

However, the former PM was accused of hypocrisy after he himself prorogued Parliament during a cash-for-questions row in 1997.

Sir John, who branded Conservative eurosceptics ‘b***tards’ at the time, was then dumped out of office after Tony Blair’s landslide general election victory weeks later.

Tory MP Iain Duncan Smith said: ‘So the words ‘pot’ and ‘kettle’ do come to mind rather significantly here.

‘I do recall that this is the same man suddenly prorogued Parliament in the height of the ‘cash-of-questions’ report and he was highly criticised at the time but he still went ahead’.

Mr Major’s lawyer cited a previous court case where an estate agent was found to be in ‘breach of fiduciary duty’ after he lied that the buyer of a new home would live there – but knew all along the property would be sold again for a profit as soon as the sale completed.

Sir John argues: ‘It could hardly be suggested that the duties of the Prime Minister to the monarch are less than those of an estate agent to a homeowner.

‘Accordingly, if the court is satisfied that the Prime Minister’s decision was materially influenced by something other than the stated justification, that decision must be unlawful.’