His withdrawal comes in the wake of the murder of Washington Post journalist Jamal Khashoggi in Turkey amid controversial circumstances with possible links to the Saudi Crown Prince Mohammed bin Salman.

Cena, 41, decided against performing on the show, TMZ reported, as WWE trudges on with the event amid enhanced scrutiny.

The champ ain’t here: John Cena, 41, has withdrawn from appearing at the WWE’s Crown Jewel event slated for this Friday at King Saud University Stadium Riyadh, Saudi Arabia. Cena was snapped in LA this past March

WWE said on Monday Night Raw that wrestler Bobby Lashley – who was managed by now-President Donald Trump during his 2007 Wrestlemania match – will step in for the West Newbury, Massachusetts native at the event.

A number of the company’s top talents remain on track to wrestle on the card, such as Triple H, Shawn Michaels, The Undertaker, Randy Orton, Kurt Angle, Seth Rollins, Jeff Hardy and Dolph Ziggler, the outlet reported.

Earlier this year, Cena was a featured performer on a mega-show the company held in Saudi Arabia in April at King Abdullah Sports City Stadium in front of a crowd of more than 60,000 fans.

The Word Life performer addressed the crowd in saying, ‘What an honor and a privilege it is to be allowed to be a part of an event like today. Regardless of what is going on in my universe, I was not going to miss this event for anything in the world. I want to send a genuine thank you to the kingdom of Saudi Arabia … for its unmatched hospitality that extends far beyond this evening.

‘And I also want to say once again, thank all of you for allowing me to be part of something so special.’ 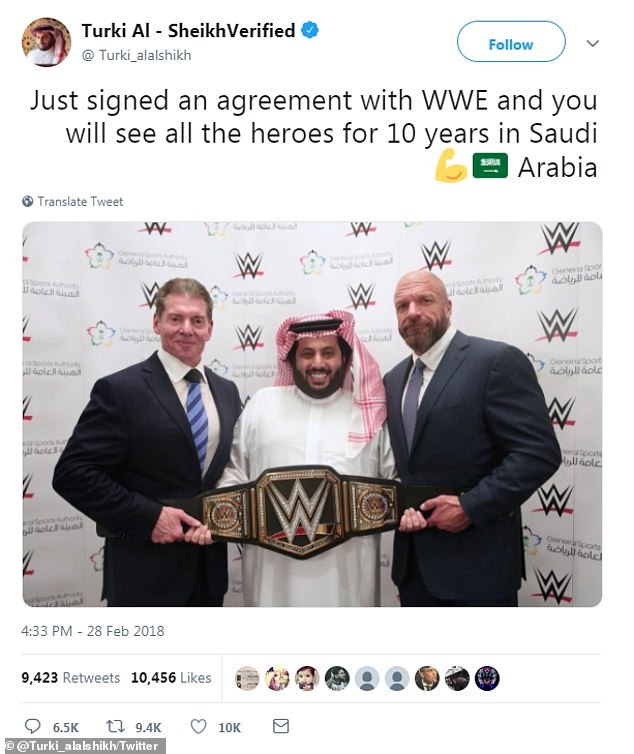 The company’s participation has been under scrutiny in the wake of Khashoggi’s October 2 murder at the Saudi Arabian consulate in Istanbul, Turkey, where he was lured under the pretense of taking care of administrative details for his wedding.

The murder of the journalist – who had been an outspoken critic of the Saudi leadership – put the focus on bin Salman’s potential oversight of the incident, as Saudi officials have issued a series of differing explanations of how and why the whistle-blowing writer was killed. Earlier this month, Trump said that bin Salman ‘denied any knowledge’ of the killing, which remains under investigation.

WWE initially issued a terse statement in the wake of the events, saying, ‘As always, we maintain an open line of communication with our performers and will address each situation accordingly.’ 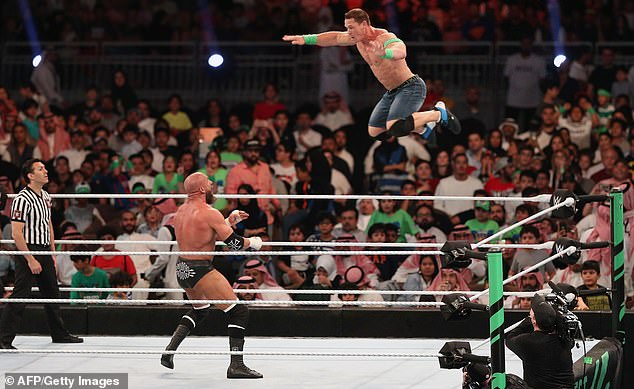 Highspot: Earlier this year, Cena was a featured performer on a mega-show the company held in Saudi Arabia in April at King Abdullah Sports City Stadium in front of a crowd of more than 60,000 fans

Last week, the wrestling organization said in their third quarter financial report that they would be proceeding on with the show.

‘WWE has operated in the Middle East for nearly 20 years and has developed a sizable and dedicated fan base. Considering the heinous crime committed at the Saudi consulate in Istanbul, the Company faced a very difficult decision as it relates to its event scheduled for November 2 in Riyadh.

‘Similar to other U.S.-based companies who plan to continue operations in Saudi Arabia, the Company has decided to uphold its contractual obligations to the General Sports Authority and stage the event. Full year 2018 guidance is predicated on the staging of the Riyadh event as scheduled.’