John Dean: Trump is ‘Nixon on steroids and stilts’

‘That’s exactly what I’m saying, I think Trump is Nixon on steroids and stilts,’ Dean said on CNN Monday night.

The Watergate lawyer was being asked if he was surprised that President Trump had gotten to the point where he was calling out Special Counsel Robert Mueller by name, which he did on Twitter this weekend. 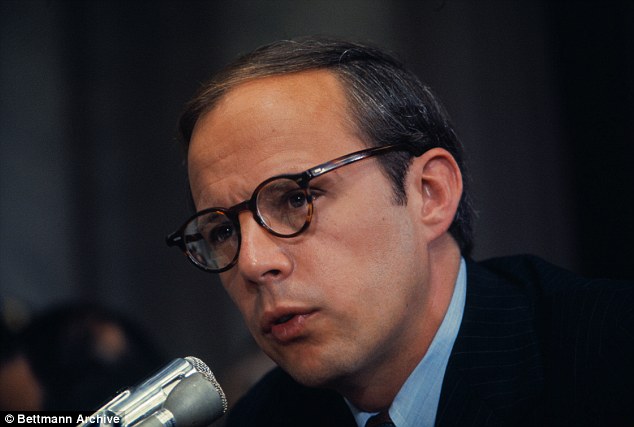 John Dean, seen testifying before the Senate Watergate Committee, said on CNN Monday that President Trump is carrying out a very public obstruction of justice

‘I am not,’ Dean replied. ‘What I think we’re witnessing is a very public obstruction of justice.’

‘He, as I see is, has already exceeded everything that Nixon did,’ Dean added. ‘He’s much more intimately involved than Nixon ever was in the cover-up.’

Dean explained that for the first eight months of Watergate, the president would learn details about the investigation through his chief of staff Bob Haldeman.

Haldeman eventually served 18 months in prison, having been tried for perjury, conspiracy and obstruction of justice.

‘It’s later when things get hotter that he gets hands on,’ Dean said of Nixon’s role in the Watergate cover-up.

Trump, the ex-White House counsel alleged, has been involved from the very beginning.

‘So I see a very different profile,’ Dean explained. ‘And the big difference being Nixon was behind closed door, so everyone was surprised when there was recordings of it, Trump is right out front of it and he’s doing it very publicly.’

This weekend Trump served up his first public lashing of Mueller by name.

‘The Mueller probe should never have been started in that there was no collusion and there was no crime. It was based on fraudulent activities and a Fake Dossier paid for by Crooked Hillary and the DNC, and improperly used in FISA COURT for surveillance of my campaign. WITCH HUNT!’ Trump tweeted on Saturday.

On Sunday he continued by suggesting that the Mueller probe, which is looking into Russian interference in the 2016 election and whether there was collusion with the president’s campaign, was politically biased.

‘Why does the Mueller team have 13 hardened Democrats, some big Crooked Hillary supporters, and Zero Republicans? Another Dem recently added…does anyone think this is fair? And yet, there is NO COLLUSION!’ Trump wrote.

Mueller, himself, is a Republican.

On Monday, Trump sang a similar tune, though this time didn’t mention Mueller by name.

‘A total WITCH HUNT with massive conflicts of interest!’ the president said.

On Sunday night, President Trump’s lawyer was pushed to put out a statement saying that the president had no plans to fire Mueller.

‘In response to media speculation and related questions being posed to the administration, the White House yet again confirms that the president is not considering or discussing the firing of Special Counsel, Robert Mueller,’  Trump’s attorney Ty Cobb said.