‘I don’t know that I’m going to get into debating the Civil War, but I do know that many historians, including Shelby Foote, in Ken Burns’ famous Civil War documentary, agreed that a failure to compromise was a cause of the Civil War,’ Huckabee Sanders argued, pointing to the 1990 PBS mini-series for historical proof.

She also acknowledged during Tuesday’s White House press briefing that ‘all of our leaders have flaws,’ looking at Lee.

White House Press Secretary Sarah Huckabee Sanders argued that Chief of Staff John Kelly’s comments on the Civil War happening over a lack of compromise were right, as she pointed to statements made by Shelby Foote in Ken Burn’s famous Civil War documentary 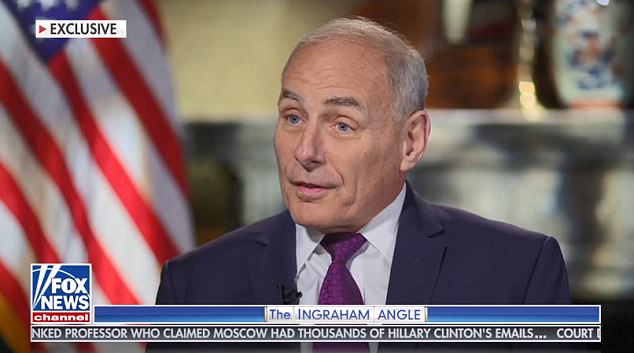 White House Chief of Staff gave an interview to Laura Ingraham on the Fox News Channel and made new comments about the Civil War, which dominated the non-Mueller part of Tuesday’s White House press briefing 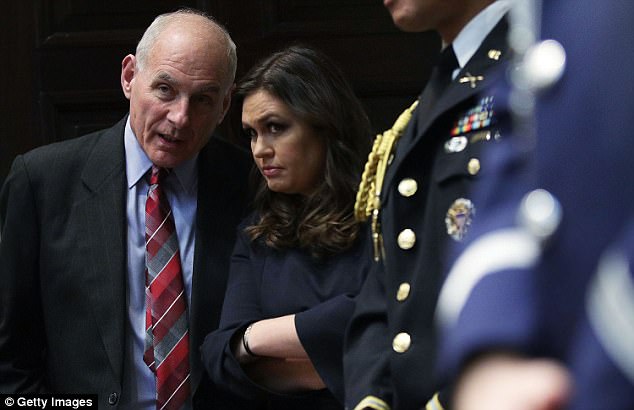 ‘Washington, Jefferson, JFK, Roosevelt, Kennedy – that doesn’t diminish their contributions to our country and it certainly can’t erase them from our history, she said.

In the nearly 30-year-old Burns documentary, Foote – the author of a three-volume set of books on the conflict that came out in 1986 – explained that the Civil War happened ‘because we failed to do the thing we really have a genius for, which is compromise.’

‘Americans like to think of themselves as uncompromising,’ Foote said. ‘Our true genius is for compromise, our whole government is founded on it, and it failed.’

‘But there are certainly, I think, some historical documentation that many people have a pretty strong consensus, people from the left, the right, the North and the South, that believe some of the individuals engaged had been willing to come to some compromises on certain things, it may not have occurred,’ she told reporters in the briefing room.

The New York Times’ Glenn Thrush noted that Huckabee Sanders, the daughter of former Arkansas Gov. Mike Huckabee, was a daughter of the South and wondered if some confederate characters, such as Nathan Bedford Forrest, a confederate Army general and early leader of the Ku Klux Klan, should be treated with more disdain than others.

‘Look, I don’t think we should sit here and debate every moment of history,’ Huckabee Sanders replied. ‘There were moments that we’re going to be a lot less proud of than others, but we can’t erase the fact that they happened.’

‘I think you have to determine what that line is,’ she continued. ‘The president has said those are things that should be left up to state and local governments and that’s not who I’m here representing today, so I’m not going to get into the back and forth of it.’

Huckabee Sanders’ remarks echoed President Trump’s statements made after the racial violence in Charlottesville, when members of the KKK, neo-Nazis and other white supremacists gathered in the Virginia town, saying their meeting was inspired by the threatened removal of a Robert E. Lee statue.

Counter-protesters met the white supremacists there – and a Nazi sympathizer rammed his car through the crowd, killing a woman.

The president responded by placing blame on ‘both sides,’ while also bemoaning the removal of some of the statues, many of which were mounted years after the Civil War during the South’s Jim Crow years.

NBC’s Hallie Jackson followed up by asking if the White House acknowledged that Gen. Kelly’s remarks were ‘deeply offensive’ to some people.

‘Because, as I said before, I think that … because you don’t like history doesn’t mean that you can erase it and pretend that it didn’t happen,’ Trump’s spokeswoman said. ‘And I think that’s the point that Gen. Kelly was trying to make.’

Huckabee Sanders then pointed a rhetorical finger at the reporters in the room saying that media keeps pushing that ‘this is some sort of a racially charged and divided White House.’

‘Frankly, the only people I see stoking political racism right now are the people in the groups that are running ads like the one you saw take place in Virginia earlier this week,’ Huckabee Sanders said. ‘That’s the type of thing that I think really is a problem.’