As John Lennon leaves his home on Central Park West, he pauses to autograph a record album for a 25-year-old former security guard named Mark David Chapman, without a suspicion in the world.

The moment is caught on camera by Paul Goresh, one of the knot of hardcore Beatles fans always to be found loitering outside the Dakota Building, where Lennon lives on the seventh floor with his wife Yoko Ono and their five-year-old son Sean.

John Lennon is photographed for the last time signing a record album for his killer, Mark David Chapman at 4pm on December 8, 1980, in New York 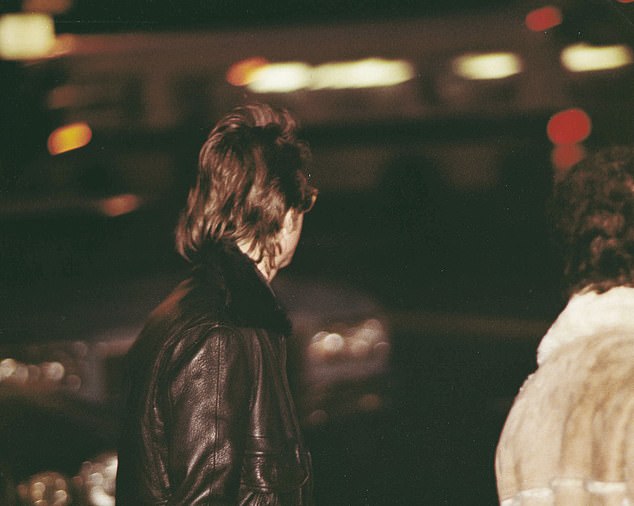 John Lennon was leaving his home on Central Park West when he was pictured from behind. The newly enhanced photograph has never been published before

Goresh, whom Lennon knows well, takes four more snaps of him, standing on the sidewalk, in no particular hurry before Lennon heads off to the Record Plant studios on West 48th Street. Goresh little realises he has a world scoop. For these will turn out to be the last pictures of Lennon ever taken.

When the former Beatle returns home late that evening, Chapman will be waiting in the shadows with a stubby .38 handgun and murder him in the street in front of Yoko.

Forty years on, the horror at Lennon’s violent death remains. Millions of people can remember where they were and what they were doing when they heard the news.

Mark David Chapman, serving a sentence of 20 years to life at New York state’s Wende Correctional Facility, is unlikely ever to be given parole, for his own safety.

Goresh’s photo of Lennon signing an album for Chapman has gone around the world many times in blurry reproduction, and many will recognise it.

But the far better quality print shown here, taken from the newly unearthed negative, clarifies the horrible irony of the moment: a pop superstar performing an act of kindness for his soon-to-be assassin.

With the four other images, it is to be sold on Tuesday in a posthumous auction of Goresh’s collected memorabilia, expected to fetch about $500,000 (£405,000). 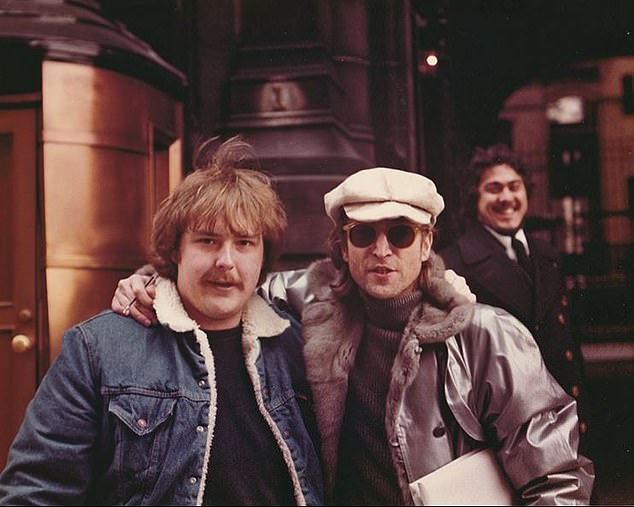 The moment was caught on camera by Paul Goresh (pictured with John Lennon on November 17, 1980), a hardcore Beatles fan seen loitering outside the Dakota Building, where Lennon lived on the seventh floor with his wife Yoko Ono and their five-year-old son Sean 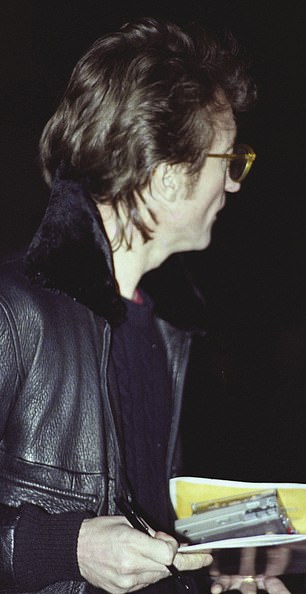 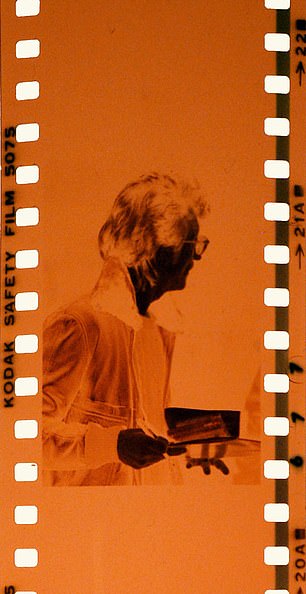 When the former Beatle returns home late that evening, Chapman will be waiting in the shadows with a stubby .38 handgun and murder him in the street in front of Yoko

Here, for the first time, the Mail publishes all five together — a prologue to one of the most shocking events in celebrity history.

In the first one, never before published, Lennon has emerged from the Dakota building and is pictured from behind.

Next he is with Chapman, signing his album. Then he is looking at Chapman with cassette tapes in one hand, autograph pen in the other.

After that he turns to the camera just as Goresh’s flash fails — a ghostly image. And finally he is at the car that will take him to the recording studio.

The sad irony is that when Lennon was gunned down at the age of 40, he had just started writing songs and making records again after a five-year ‘retirement’ and was feeling as good about the future as any chronically dissatisfied genius ever could.

It was almost a decade since he had left Britain for New York, weary of being chained to his smiley Beatle image even after the band’s break-up, and sickened by the abuse hurled at Yoko by fans and the media alike.

With the radical Yoko as his spur — rather than PR-minded Paul McCartney as his brake — he had plunged into revolutionary activism while fighting the U.S. Government’s efforts to deport him on the strength of a minor drug offence in London in 1969. 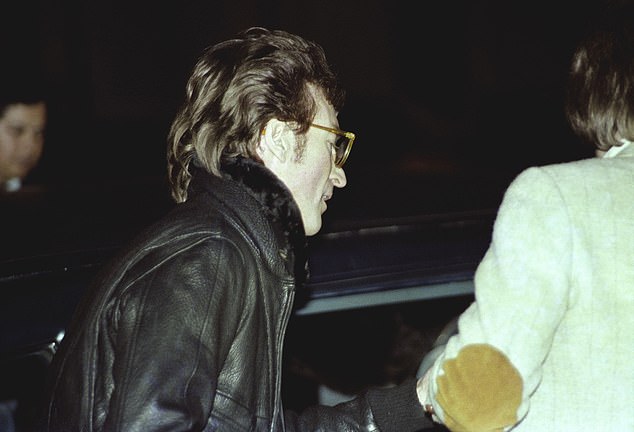 After signing Double Fantasy album for the 25-year-old former security guard, John Lennon is photographed getting into his limousine – and is thought to be the last picture of him alive 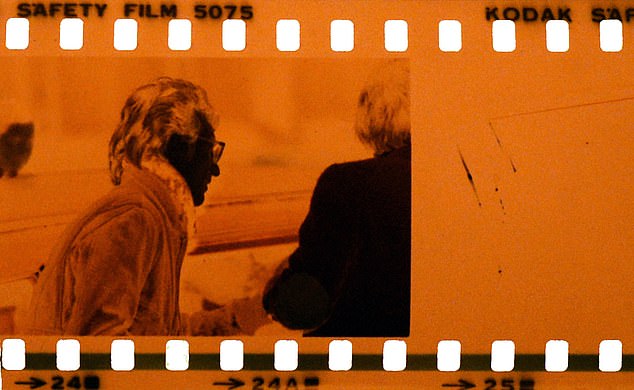 Pictured, the original negative of, what is thought to be, the last photograph of John Lennon alive

The marriage with Yoko, his obsession for the past five years, seemed to have soured and in 1973, tired of his blatant infidelities, she had banished him to Los Angeles for the 18 months of drunken frolicking with rock pals he would later call his ‘lost weekend’.

Finally, in 1976, he had managed to acquire a Green Card, allowing him permanent residency in the U.S. — and Yoko had given birth to their son Sean.

John had decided to bring up Sean as a ‘house husband’, a novel concept in the late 1970s. So the pampered rock star learned childcare and even to cook, while Yoko looked after his business, cannily investing in real estate and even a herd of valuable Holstein cattle.

In those years John was no recluse and was seen regularly in the neighbourhood of the Dakota, eating in restaurants or pushing Sean in a stroller through Central Park.

He often said what he liked most about New York was being allowed his space and privacy. So personal security — as even minor stars have now — was non-existent.

In 1979 he had started writing songs again and the result was an album, Double Fantasy, on which Yoko and he had a side each. It revealed a very different John Lennon from the restless rebel the world remembered.

Songs such as Woman and Beautiful Boy celebrated his newfound security as a husband and father, and he returned to the singles charts with (Just Like) Starting Over, which seemed to promise more the same mature spirit.

He was even planning to return to Britain, chartering the liner QE2 to sail up the River Mersey to his native Liverpool.

New York in 1980 could hardly be called a safe place. Shootings and muggings were rife. In his revolutionary days, John had denounced the police as ‘pigs’; now he and Yoko donated $1,000 towards bulletproof vests for Manhattan street cops.

In fact, for months before John’s death, the superstitious Yoko had lived in dread of something bad happening to her husband. 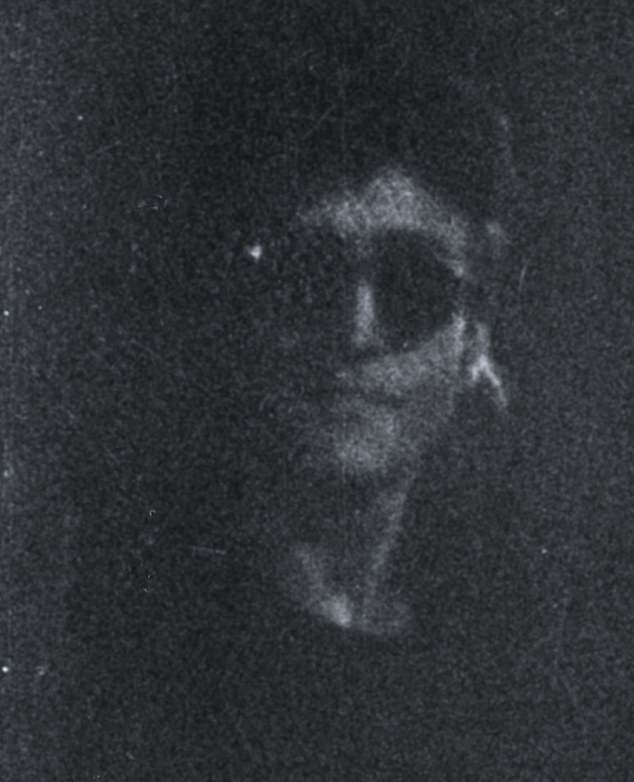 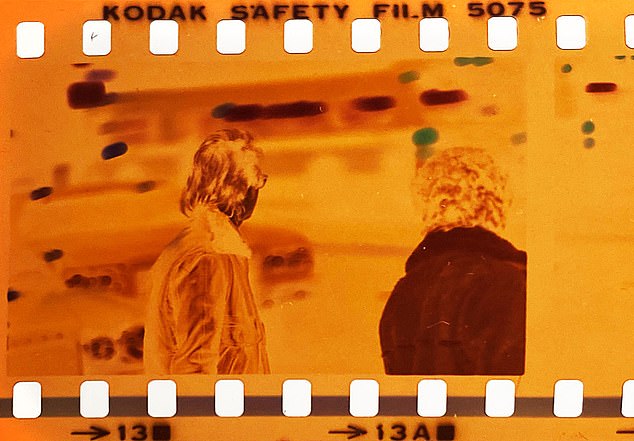 Chapman told Paul Goresh that he had travelled all the way from Hawaii to get his album signed. Pictured, the original Kodacolor negative taken by Paul Goresh of John Lennon

She consulted a Japanese numerologist who claimed to see ‘clouds of evil’ around him — and had four psychics on her payroll, to predict the immediate future.

One of them reported seeing a vision of a woman with long hair weeping uncontrollably, but she thought that meant her sister.

Mark Chapman had arrived in New York on Friday, December 5, 1980, flying from Hawaii, where he lived with his Japanese-American wife. He was a Beatles fan, as the 11 hours of their music on tapes in his rucksack showed.

But his hero-worship of John had turned to hatred.

He believed that by accumulating wealth, property and pedigree cattle, John had ‘betrayed’ the spirit of The Beatles. And he claimed voices in his head were telling him this could be avenged only by ‘blood’.

He was also obsessed by Holden Caulfield, the anarchic narrator of J.D. Salinger’s novel The Catcher in the Rye, and believed John’s murder would allow him to be transformed into Caulfield.

He hung around outside the Dakota on December 6 and 7 but didn’t see John until the Sunday, when he ‘snatched’ some photographs of him, then fled.

The next day, Paul Goresh arrived outside the Dakota just before noon with his camera and a copy of John’s book A Spaniard In The Works, which he hoped to persuade its author to sign.

As he took up his usual vantage point, he was approached by a pudgy young man in a thick coat, holding a copy of the Double Fantasy album.

‘He said, ‘Hi, my name’s Mark. I came all the way from Hawaii to get my album signed,’ Goresh remembered. ‘But when I asked where he was staying he got really aggressive, so I said ‘go back to where you were standing and leave me alone’.’

When Lennon emerged, Goresh approached him with the book he wanted autographed. While they were talking, Chapman came up and thrust the Double Fantasy album in front of Lennon. 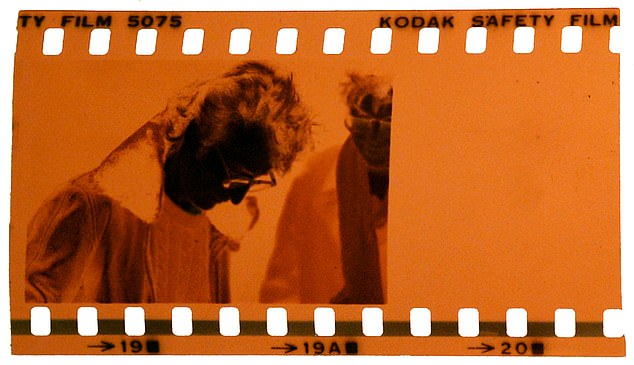 When Lennon was gunned down at the age of 40, he had just started writing songs and making records again after a five-year ‘retirement’. Pictured, the original Kodacolor negative of John Lennon signing the album for Chapman 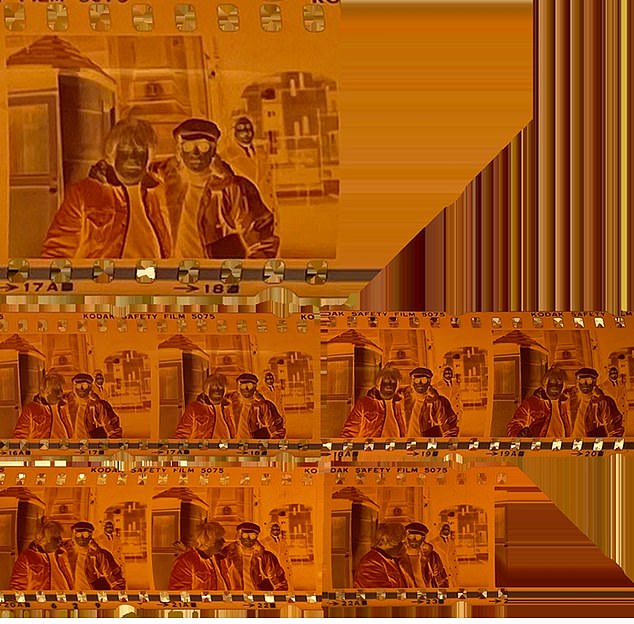 Paul Goresh had a short conversation with Chapman outside the Dakota when they were both waiting for John Lennon on December 8, 1980. Pictured, original negatives showing Paul Goresh with John Lennon on November 17, 1980

‘He didn’t say anything,’ Goresh recalled. ‘Eventually, John said ‘Do you want me to sign this?’ so I took a shot of him doing it.’

Lennon’s car to the Record Plant hadn’t shown up and he stood there at a loss until a crew from RKO Radio in San Francisco — who had just taped what would turn out to be his last interview — also emerged from the Dakota.

The RKO crew had a car waiting to take them to the airport, and DJ Dave Sholin offered to drop John at the Record Plant on their way. The atmosphere was so relaxed, Goresh took more pictures.

John spent the evening at the Record Plant playing guitar on a Yoko solo track, Walking On Thin Ice. When the session ended at 10.30pm, she suggested dinner at the Stage Deli but he insisted on returning to the Dakota to say goodnight to their son.

Even then, disaster might have been avoided if their car had been driven into the building’s courtyard. But it parked at the kerb.

Chapman opened fire, hitting him four times. When the police arrived minutes later, they found John beyond help and his killer leaning against a buttress, calmly reading The Catcher In The Rye.

The negatives of Goresh’s one known Lennon image and four unknown ones became part of his vast collection of Beatles memorabilia, their existence unknown to newspapers and magazines.

Goresh died in 2018, having handed the collection to a dealer on the understanding it would not be sold during his lifetime.

Ken Farrell, from the auctioneers Just Kids Nostalgia, calls the five last pictures of Lennon ‘one of the most important groups of [Beatles-related] images to come to market in many years.’