The tragic circumstances surrounding the death of John McCain’s beloved dog Burma, who stayed at his side as the late Arizona senator battled a brain tumor, have been revealed.

The Chesapeake Bar Retriever drowned after becoming stuck in a pipe on the McCain’s estate in Hidden Valley ranch in Arizona last month – having developed ‘weird’ behaviour following the death of her owner John McCain eight months ago.

Speaking to The Arizona Republic yesterday Cindy McCain, 63, the widow of John McCain, said: ‘It’s weird — she had never done this before — she ran into a pipe.’

Family and workers on the ranch tried to free the much-loved dog from the pipe linking a series of ponds on the property, but were unable to free her from the debris until her body washed out from the other end.

Mrs McCain added:  You know, we have a series of ponds on our property … and she ran into the pipe and she got stuck.

‘She drowned, and eventually, her body came out the other end of the pipe.’

The five-year-old dog was a birthday gift to war veteran in 2014 as a puppy and remained loyal until the end as McCain battled brain cancer.

In an interview with NBC Nightly News in April Mrs McCain described the tragic and gruesome circumstances of Burma’s death. She said:  ‘The pipe had debris in it evidently, and we couldn’t get her out, or the people that take care of the place tried at both ends, risked their own lives, to try to get her out, and they couldn’t do it.’

‘I told my friends it was a bit like losing him [her husband] all over again, she was what I had left of him.’

McCain and his wife often posted pictures and videos playing around with Burma on their ranch.

His daughter Meghan McCain shared a picture of former senator McCain posing with Burma in his lap on Instagram Monday saying the hound was ‘absolutely and truly devoted to him’.

‘She would never leave his side, followed him around every single step when he would walk around our ranch, slept by his side every night and we always said Chesapeake bay retrievers were the most affectionate breed of dogs,’ she wrote in her tribute to the pup.

‘The love this dog gave him was equal to a family member. I love you Burma and hope you’re in heaven jumping into creeks, chasing sticks and fish with Dad,’ she added. 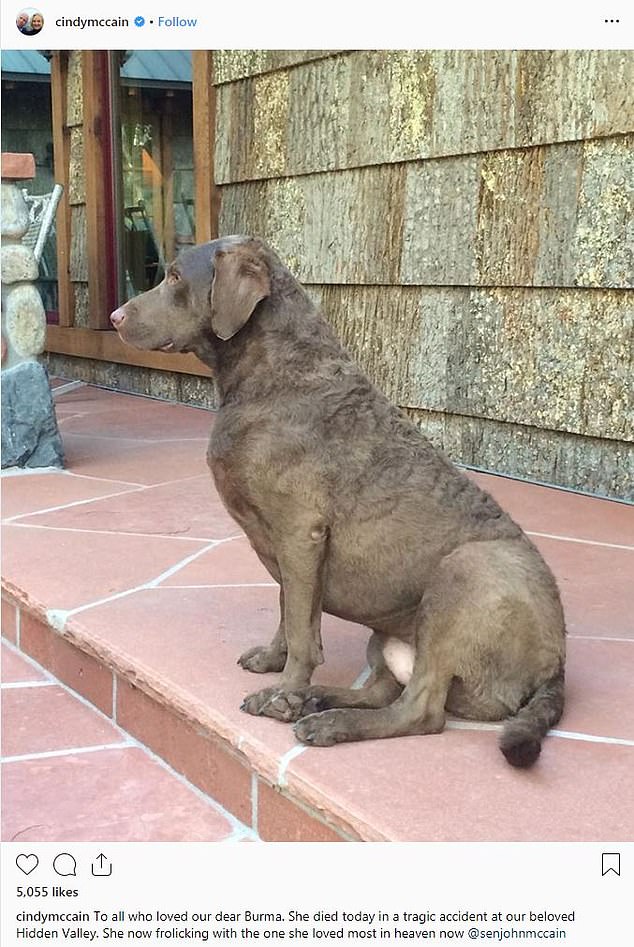 Cindy McCain explained that Burma died in a ‘tragic accident’ but didn’t provide details adding, ‘She is now frolicking with the one she loved most in heaven now’ 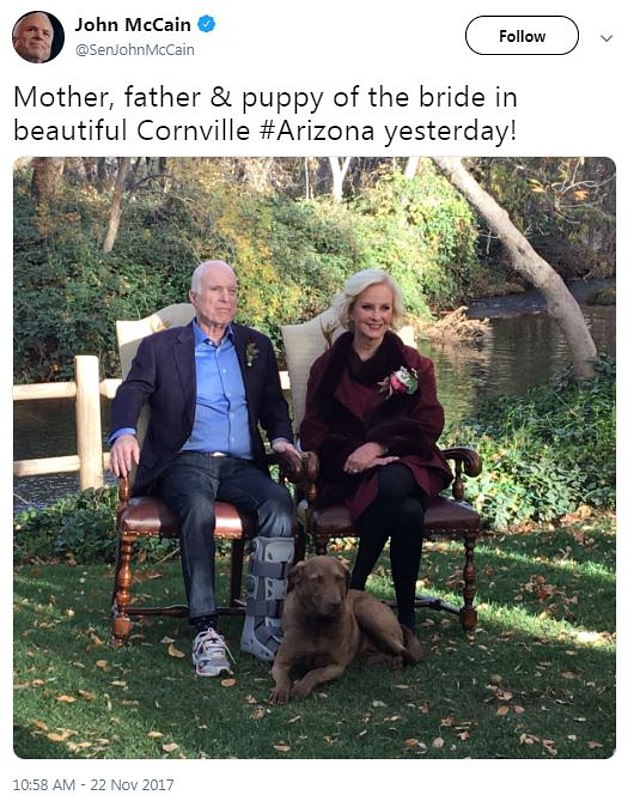 On John McCain’s social media he often shared videos and pictures of Burma, pictured above at his feet at his daughter Meghan’s wedding in November 2017 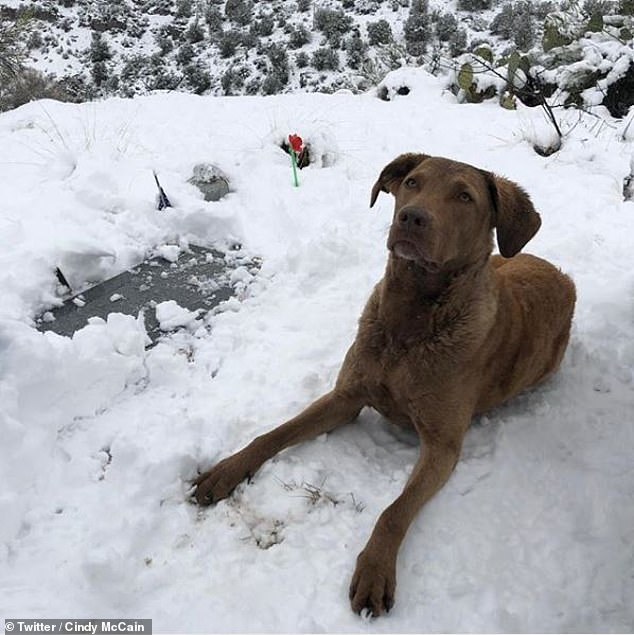 ‘She would never leave his side, followed him around every single step when he would walk around our ranch, slept by his side every night,’ Meghan McCain said on the devoted dog pictured above at John McCain’s grave marker at the family ranch

‘You brought us all so much love and joy,’ she added.

The View co-host even shared a picture of the beloved Burma at her wedding in 2017, but later deleted the post. In the pictures Burma sat right at John’s feet as they posed with the McCain clan.

She also shared a sweet video her father posted back in 2017 of the dog playing fetch in a river with the caption ‘Burma at her best!’

Mrs McCain made the announcement of the dog’s death in April 8 posting an Instagram post of the pooch with the caption: ‘To all who loved our dear Burma. She died today in a tragic accident at our beloved Hidden Valley. She is now frolicking with the one she loved most in heaven now.’ 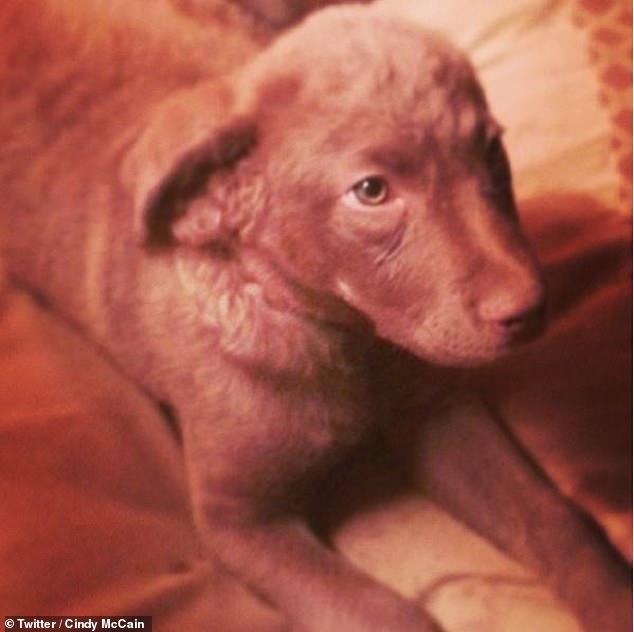 Burma, who was a gift to the former senator John McCain, pictured above as a pup 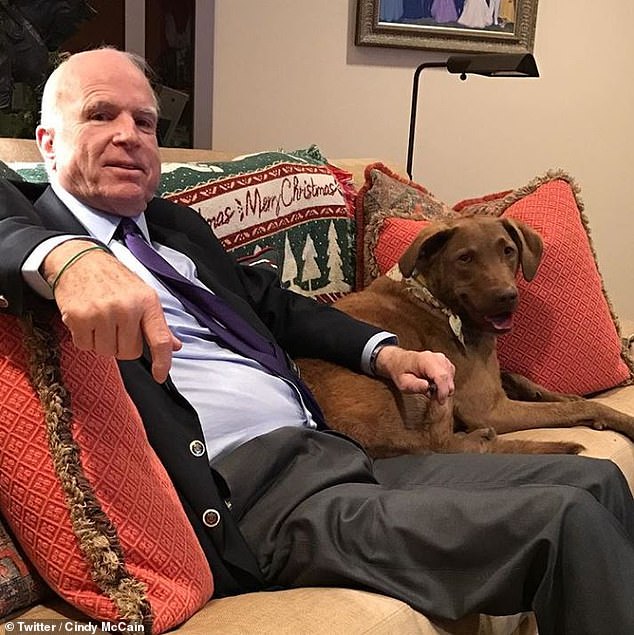 Best friends: In most pictured Burma is seen loyally at McCain’s side or feet

Burma passed away eight months after former senator McCain died in his battle with stage four brain cancer at the age of 81 on August 25, 2018.

On Sunday Meghan shared a sweet photo of her father with the caption, ‘I miss you the most on Sunday’. She previously said that she and her father had weekly phone calls on that day.

After McCain announced his diagnosis in July 2017, Megan posted a picture hiking with her father and Burma writing, ‘Amazing hike with Dad this morning’.

A month later the former senator shared a video of Burma playing fetch and running through a creek.