A Muslim woman’s Sharia marriage to a property developer in a London restaurant 22 years ago was not valid under English law so she only has a ‘limited’ claim to his cash, property and pensions, senior judges ruled today.

Nasreen Akhter wanted a divorce from her husband Mohammed Shabaz Khan who she married in a religious ‘nikah’ ceremony carried out by an imam in 1998.

But in a landmark ruling in London today three family judges said the English courts did not recognise their Sharia marriage saying it ‘had no legal effect’.

The judgment means Mrs Akhtar is powerless to claim significant sums of money or property from Mr Khan in the same way a legally married woman can because they did not also have a legal civil ceremony as well.

Mrs Akhter is expected to appeal to the Supreme Court in a case that has major implications for people of other faiths including Hindus and Sikhs.

Leading family law barrister Camini Kumar told MailOnline even though they have four children and lived together for almost two decades she will have ‘limited’ claims to his assets.

She said: ‘The judgment confirms that when their relationship breaks down these women cannot make the financial claims against their husband that they would be entitled to if they had married in a qualifying ceremony. They are to be treated as any other cohabiting couple in the eyes of the family court.’ 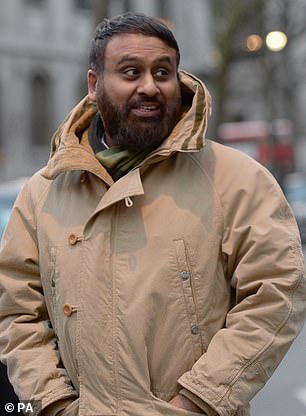 The warring estranged couple went to the High Court in 2018 after Mrs Akhtar petitioned for divorce after their relationship broke down in 2016.

The couple, both of Pakistani heritage, chose to marry at a restaurant in Southall, west London, in a religious ceremony carried out by an imam with 150 family and friends as guests.

Mrs Akhter, who is a solicitor, also wanted a civil ceremony but claimed her husband refused when they lived together in Pinner, Middlesex.

She told the High Court that Mr Khan had become her ‘husband’ and he had considered her his ‘wife’.

‘From my limited understanding of Islam at the time it did comply with all the requirements,’ she said.

She added ‘I saw him as my husband. There was no question in my mind at all. He always introduced me as his wife’.

But Mr Khan had argued she couldn’t have a divorce on the basis that they are ‘not legally married’ in the first place because they are married ‘under Sharia law only’.

The High Court ruled two years ago that Mrs Akhtar was right and their union should be recognised because their vows had similar expectations of a British marriage contract.

But today the Court of Appeal overturned the decision and said the wedding was ‘a non-qualifying ceremony’ because it was not performed in a building registered for weddings, no certificates had been issued and no registrar was present – meaning the marriage is ‘invalid’.