A first-time mother, who produces four times the average amount of breast milk, is forced to express during work meetings and driving home – before giving the excess away.

Kate Kachman, 31, who devotes four hours a day – from 5.45am to 11pm – to pumping 7.2 pints (6 imperial pints) of milk from her breasts, even has her own personal office fridge, where she stores it, before taking it home.

Kate, who lives in Orlando, Florida, with her IT technician husband, Blake, 30, and their four-month-old son, Keith, said: ‘I’ve already given 108 (90) pints to our local milk bank, for mothers who struggle to breastfeed and premature babies.

‘I put the milk Keith needs aside and then package, label and freeze the rest.’

Believed to have hyper-lactation syndrome – a rare condition meaning she over-produces milk – Kate starts pumping five minutes after waking up at 5.40am.

She continued: ‘Once I started pumping, I just couldn’t stop. I pump everywhere – at work, at the office, on my drive home, which is totally legal by the way, in meetings and car parks. I’ve even done it at Disneyworld.

‘My bosses have been so understanding, they even cleared out a fridge for me.

Kate Kachman, 31, from Orlando, Florida produces four times the average amount of breast milk, and pumps the excess so she can donate it to the local milk bank 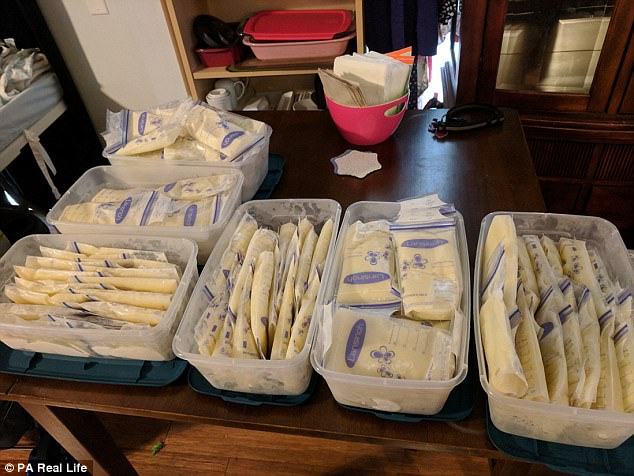 Kate began freezing her excess breast milk, which she donates to the local milk bank for mothers who struggle to breastfeed and premature babies

‘I do get some funny looks from drivers at traffic lights, but what can I do? My milk wouldn’t stop coming.’

As a working mother, Kate admits that producing more than seven pints (UK six) of breast milk a day, by pumping every three hours – four times more than the average – has to be fitted into a rigid schedule.

She often sleeps through her first hour session, at 5.45am – setting her alarm for 6.45am.

Hyperlactation syndrome is a rare condition in which the mother produces more milk than her baby needs.

Symptoms for the mother include breasts that never feel soft and comfortable, even after feeding, mastitis, blocked ducts and sore nipples.

Your baby may also go through regular periods of colic, gain more than 2lbs (900g) a month, regularly bring up a lot of milk and feeds frequently but doesn’t seem satisfied.

Causes include a baby who isn’t nursing effectively and compensates by feeding more often, which increases milk production.

Switching breasts before the first side is adequately drained and hormonal factors can also have an impact.

Kate Kachman, 31, from Orlando, Florida produces four times the average amount of breast milk and donates to excess to the local milk bank, for mothers who struggle to breastfeed and premature babies.

8:30am: Pump while having breakfast at her desk

11:30am: Pump while having lunch at her desk

8:30pm: Kate makes dinner and responds to email before pumping and prepping the next day’s bottles

She pumps again during her 5pm drive home, fitting the funnel on to her nipple for the half hour journey.

After making dinner, at 8.30pm, she is back to the pumper, with her final half hour session starting at 11pm, after which she goes to bed.

She said: ‘It’s exhausting what I do, but I love it.

‘I want other mothers to know how amazing donating milk is, is and how much it helps others.’

Her current position is made all the more extraordinary as Kate, who gave birth to 7lb 11oz Keith Moon Kachman on September 15 last year, at Winnie Palmer Hospital, Orlando, Florida, feared she would never have children.

In September 2013 – 14 months before the couple, who met as they converted to Judaism at their local synagogue in 2010, were due to marry on November 8, 2014- Kate was diagnosed with a pulmonary embolism, or blocked blood vessel, in her lungs.

Told the potentially life-threatening condition would put her at increased risk if she fell pregnant, she explained: ‘I was told the weight of the baby pressing on veins in my pelvis could slow the blood return from the legs, and that clots are more likely to form when blood slows or pools.

‘I was devastated to think we might never have a family. I told Blake if he didn’t want to marry me, because he’d always dreamed of being a dad, then that would be ok.

‘But we decided to take some time, get married and see if we were still being advised not to have a baby.’

Blake vowed to stand by Kate, who underwent catheter-directed thrombolysis – where x-ray imaging is used to help guide a special medication to the site of blood clots to dissolve the blockage – for the condition, and the pair wed as planned the following year. 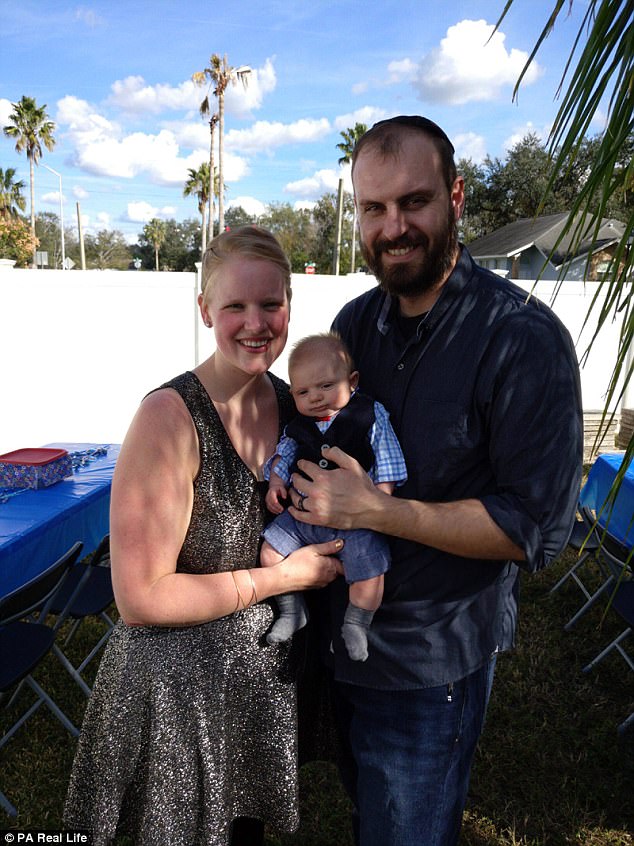 Worryingly, heartbroken by the prospect of a life without children, Kate comfort ate – ballooning by five stone between September 2013, when she was diagnosed and July 2015.

Weighing 280lbs (20 stone) and wearing a size 22 clothes (UK size 26), she ate pizza and ice cream every day, without exercising.

‘I kept telling people I didn’t mind not being a mother, that I was a career woman and happy with that,’ she said. ‘But, deep down, I still yearned for motherhood. I was depressed and needed to sort myself out.’

Finally, in July 2015, Kate saw a nutritionist, who told her some home truths. 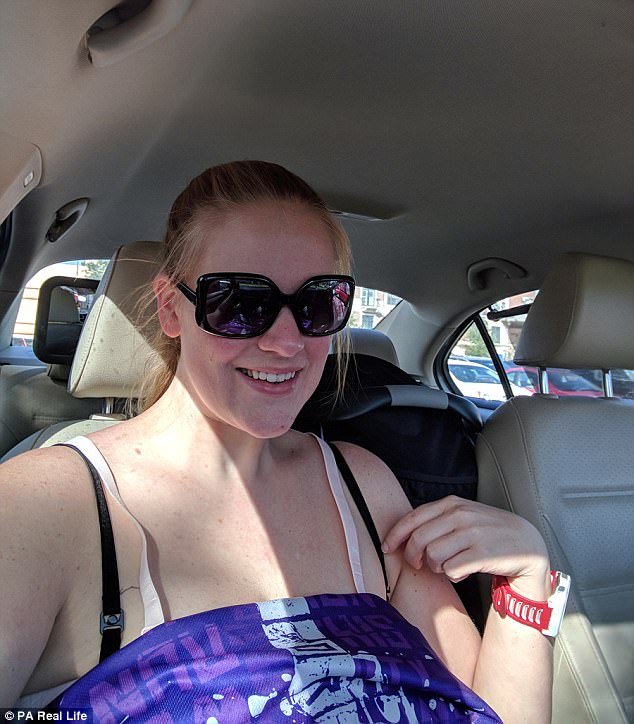 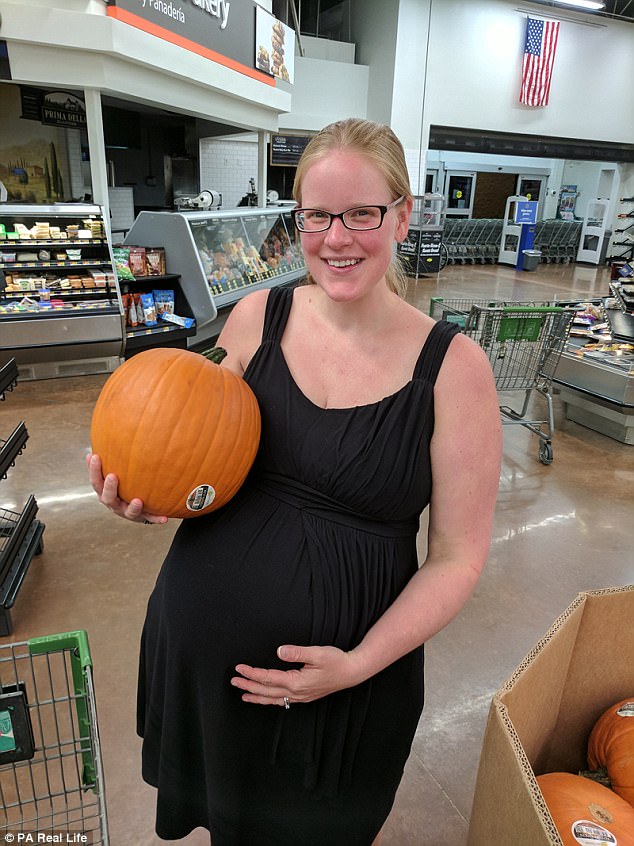 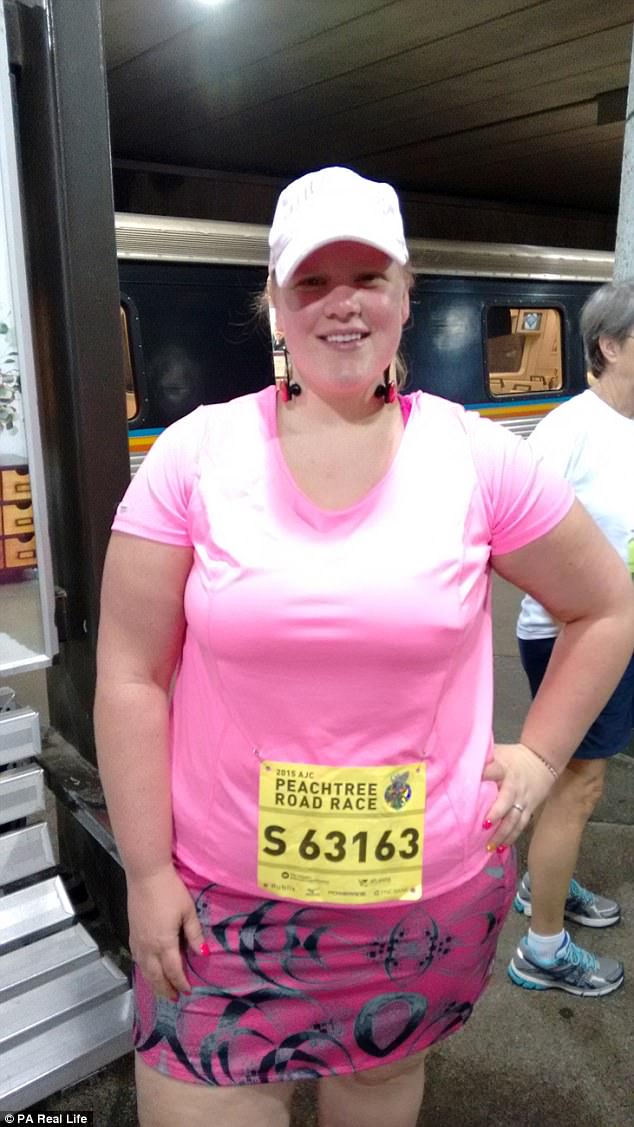 ‘She said, ‘You’re not depressed you’re fat,’ which I took as a challenge to lose the weight and get back to the gym.

‘By October 2016, when I’d shed the pounds, me and Blake talked and said we really wanted to try for a baby. We knew there would be risks early on, but I was well and healthy and wanted to try.’

Baby Keith was conceived while Kate and Blake were celebrating the Jewish festival of Hanukkah and was born after a healthy pregnancy.

‘I can’t put into words how excited and overjoyed we were,’ said Kate. ‘I never thought I would be a mother and there I was, holding my beautiful baby boy.’ 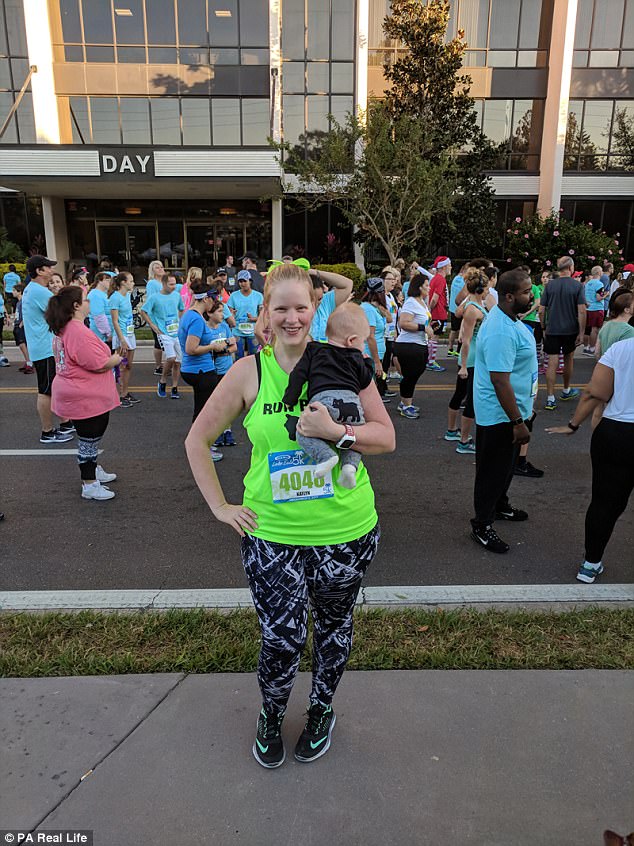 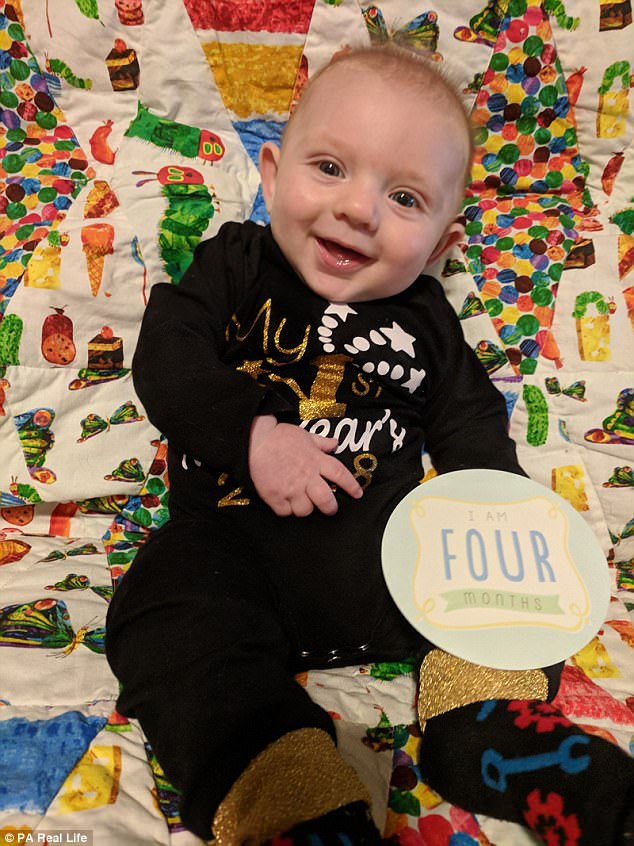 Baby Keith was born following a healthy pregnancy, after Kate was warned a pulmonary embolism could put her at risk 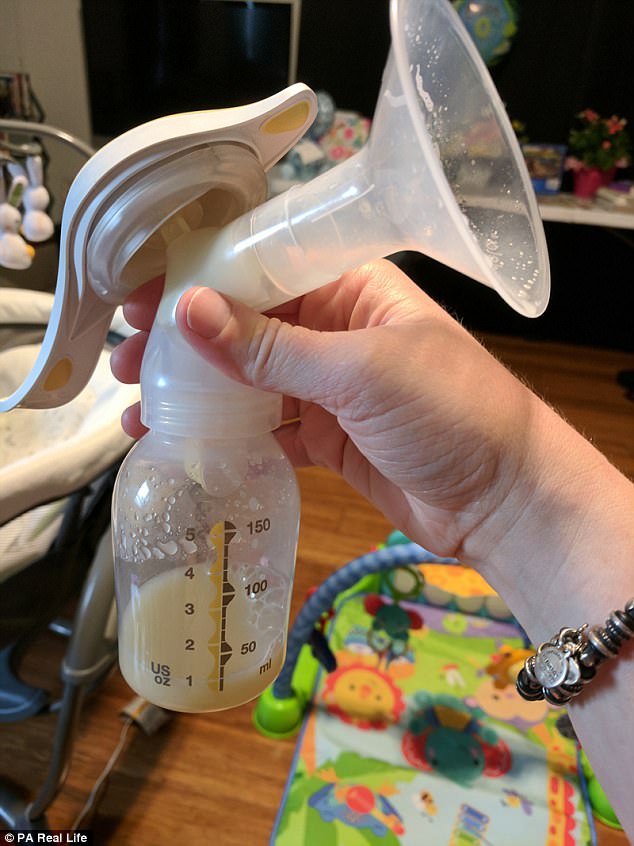 After spending two days in hospital, Kate was struggling to get Keith to latch onto her breast.

‘I tried every three to four hours, but he just wouldn’t take it,’ she said. ‘I was crying my eyes out, as I desperately wanted to feed him my milk, rather than formula from a bottle.’

It was then Kate was given a hand pump to express breast milk by doctors.

And, after just a few days, Kate realised she was producing more milk than her young son could drink. 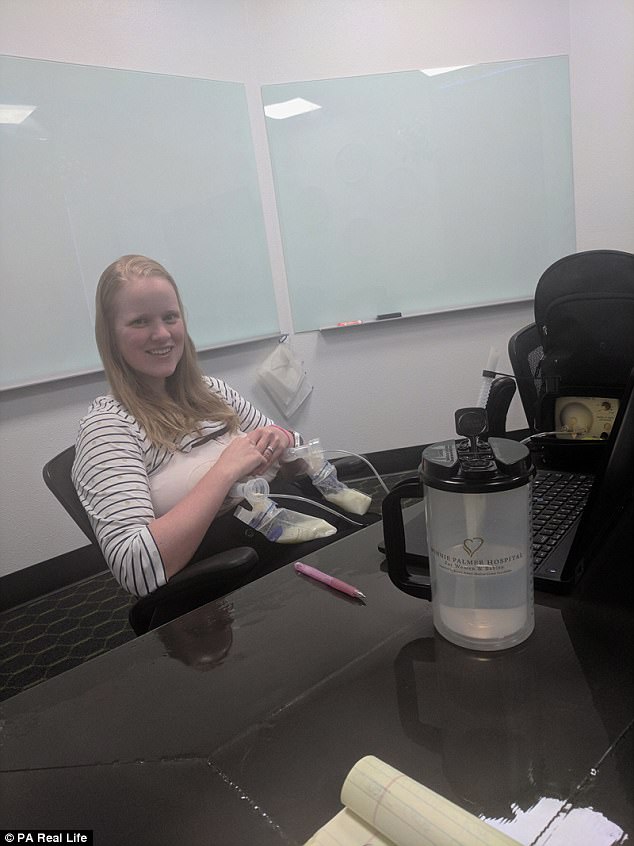 Kate pumps during meetings at work. Her understanding boss has even given Kate her own fridge space to store her milk 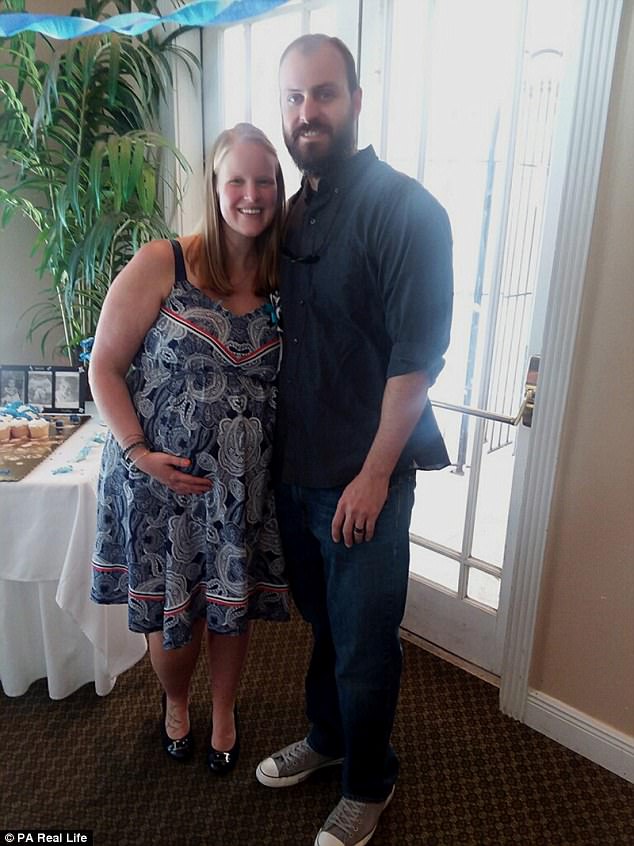 Kate lost weight to conceive with husband Blake, who she met as they were both converting to Judaism

She said: ‘Keith wasn’t drinking it all and it was just sitting there. I got to the point where I was producing so much more than he could handle.

‘It was going off, so to start with I started expressing it in bags and freezing it. But then my freezer was getting too full.

‘I told Blake we needed more freezer space, making him clear out a spare one we had in the garage so we could store the milk in there.’

Soon, though, Kate was producing so much that even her spare family-sized freezer became too full. 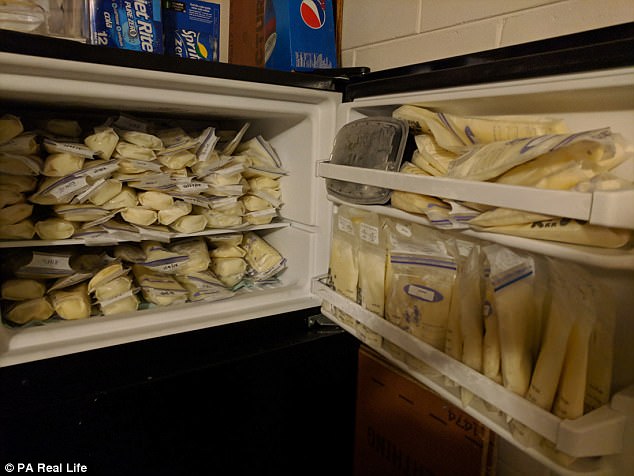 A separate freezer houses the excess milk. So far, she has donated 108 (90) pints to help vulnerable babies. 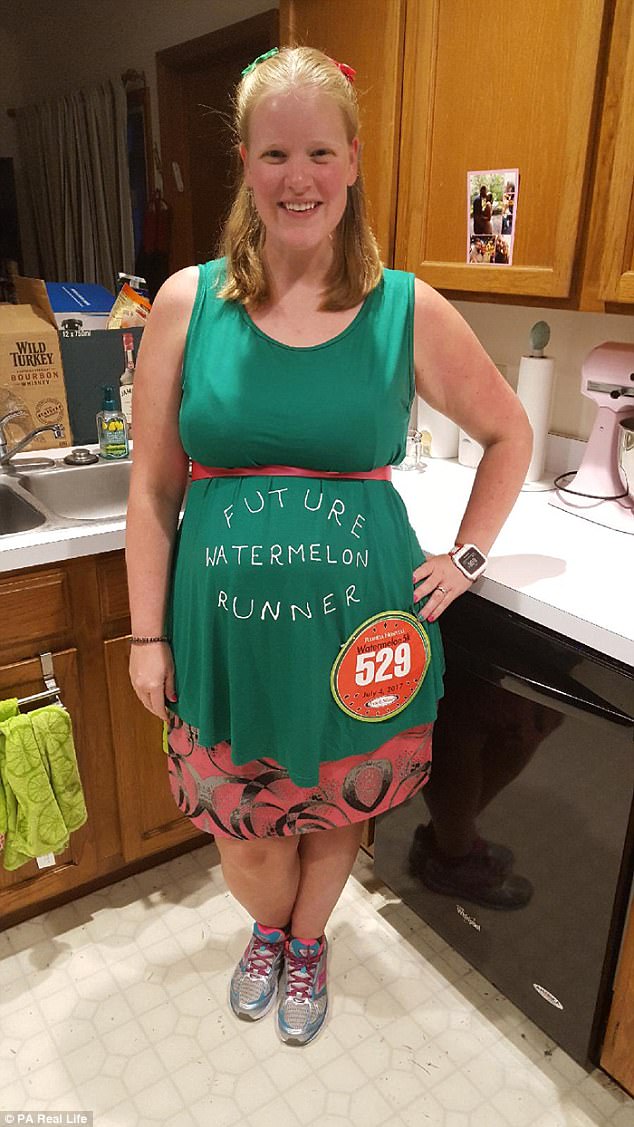 ‘I started researching producing too much milk and came across hyper lactation syndrome, an oversupply of breast milk,’ she said.

‘I knew immediately that was what I had. I clicked through some web pages and discovered the Florida Milkbank, where I could donate my excess milk.’ 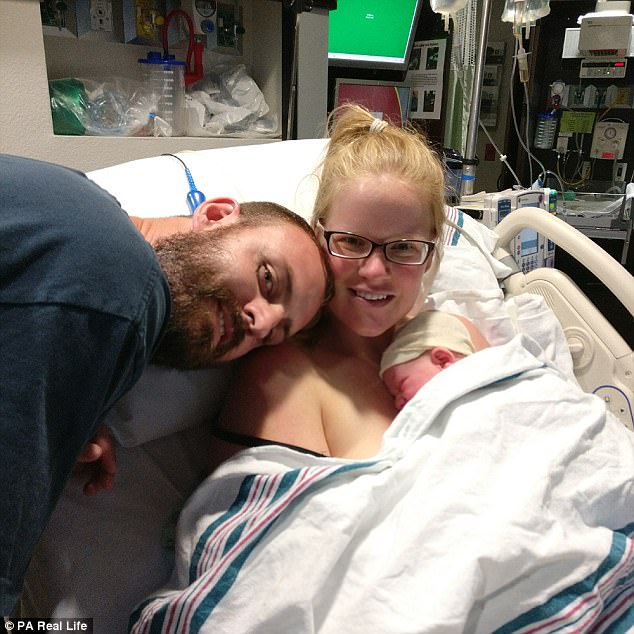 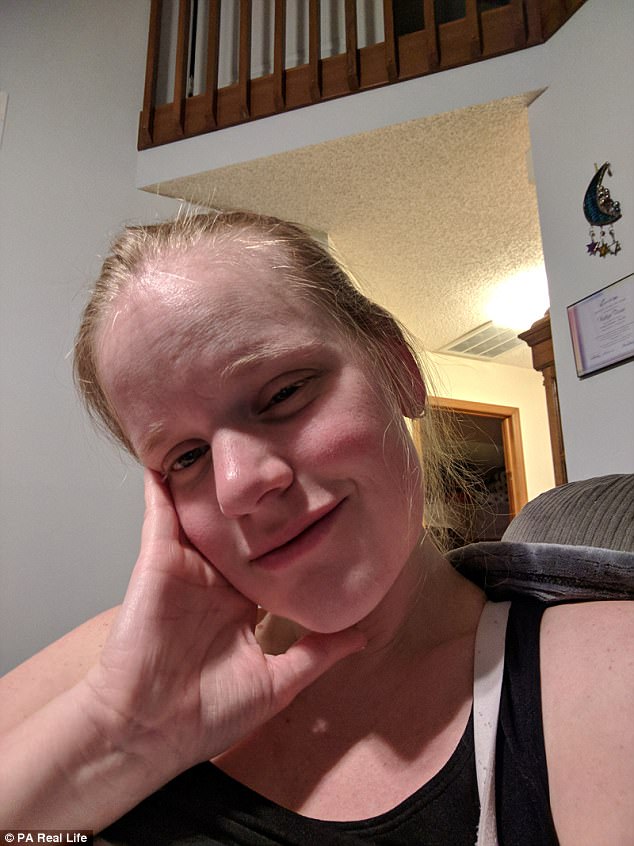 Kate begins pumping at 5.40am and does her final round at 11pm

She said: ‘I just love knowing I am feeding other babies in the neonatal intensive care unit who have been born too early for their mothers to feed them, or are unable to feed them.

‘My baby could have so easily have been in the NICU and I would have been so thankful to the women who donate to the bank, for helping him.

‘I’m not drinking alcohol or caffeine to keep my supply going. Around 18 months I think I will start weaning off, but I never want to stop donating my milk, it’s a real gift.’