They married in a surprise, £5million wedding on Friday in the stunning surroundings of St Moritz, Switzerland.

And the celebrations continued all weekend for Dasha Zhukova and her billionaire shipping tycoon husband Stavros Niarchos.

Their celebrity guests shared a string of images from the lavish nuptials, with Katy Perry revealed to be among the a-list guests who helped the super rich couple keep the party going.

Party time: The celebrations continued all weekend for Dasha Zhukova and her billionaire shipping tycoon husband Stavros Niarchos as guests including Katy Perry enjoyed a spot of skiing in the wedding location of St Moritz

Derek Blasberg, YouTube exec and friends to the stars, posted images from the lavish weekend on his Instagram account on Sunday, quipping ‘We peaked’ in the caption.

Derek snapped his close pal Katy cuddling up to some of the wedding’s younger guests, dressed for the snow in a ski suit and furry hat.

Katy’s fiancé Orlando Bloom was pictured on Saturday looking a tad worse for wear after the main event on Friday, but more festivities were to come as the couple hosted a Russian-themed post-wedding bash on Saturday night.

Marie-Chantal, Crown Princess Of Greece took to Instagram to share her wedding snaps, posing in traditional Russian dress alongside her husband Pavlos, Crown Prince of Greece and high society photograper Jean Pigozzi for the Saturday bash. 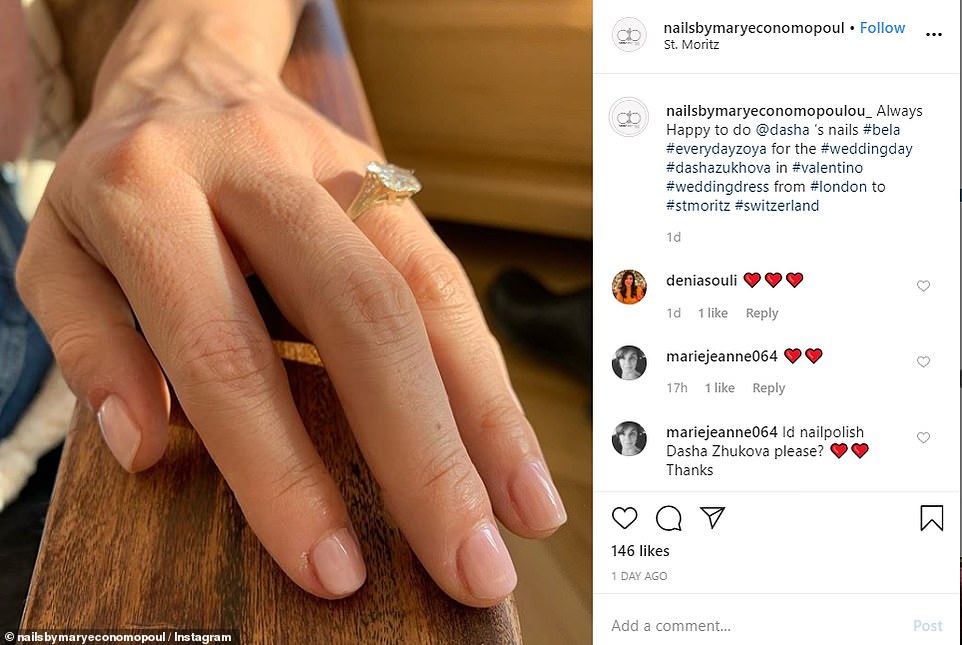 Wedding bling: Dasha showed off her dazzling engagement ring in a new post shared by the nail boutique in charge of bridal manicure. 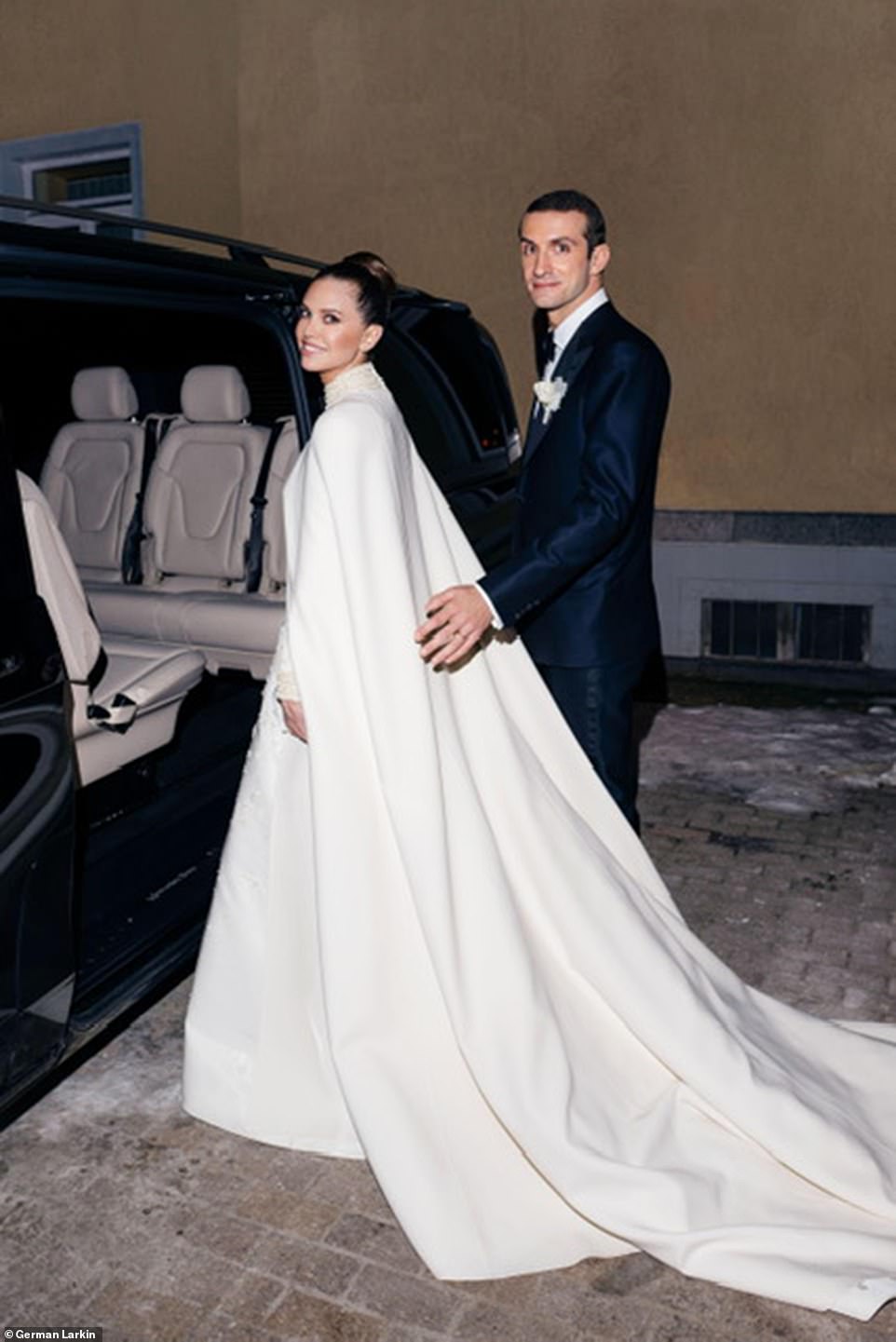 Nuptials: DailyMail.com exclusively reported that Dasha, 38, and Stavros, 34, said ‘I do’ in a specially erected marquee close to St. Moritz’s main ski jump Olympaschanze on Friday 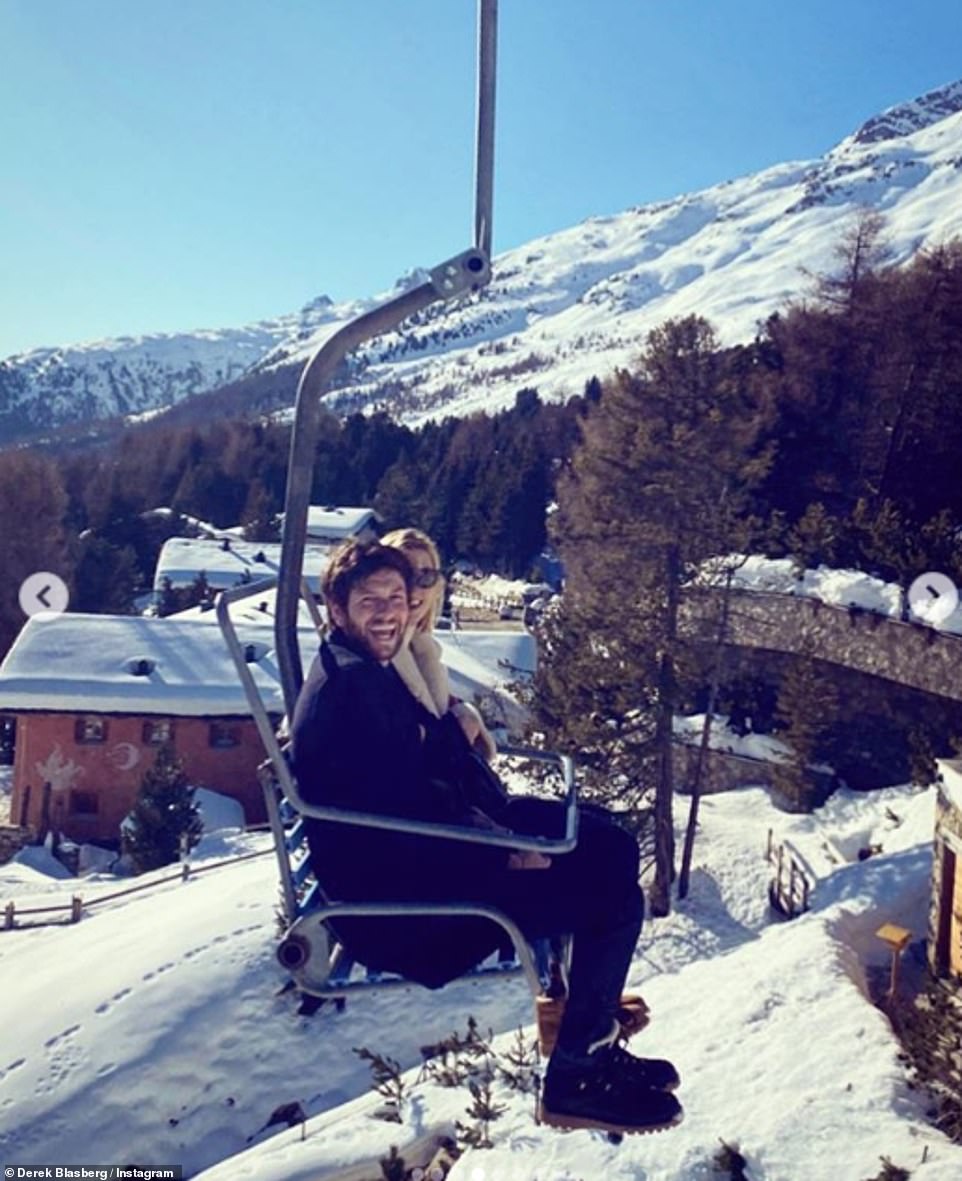 Checking out the view! Derek Blasberg, journalist and friends to the stars, posted images from the lavish weekend on his Instagram, including a shot of model Karlie Kloss and her husband Joshua Kushner on a ski lift

After two nights of celebrations, the group spent Sunday enjoying the skiing at St Moritz, with another photo shared by Derek showing wedding guests Karlie Kloss and Joshua Kushner taking in the stunning views from a ski lift.

Meanwhile Dasha showed off her dazzling engagement ring in a new post shared by the nail boutique in charge of bridal manicure.

Dasha, the ex-wife of Chelsea owner Roman Abrahamovic, was married in a surprise £5million wedding 24 hours earlier than had been expected – with the date being kept secret by guests and the couple.

On Saturday, Dasha, who sources said wore a Valentino bridal gown at Friday night’s ceremony, had organised a party and disco inside her husband’s hotel. 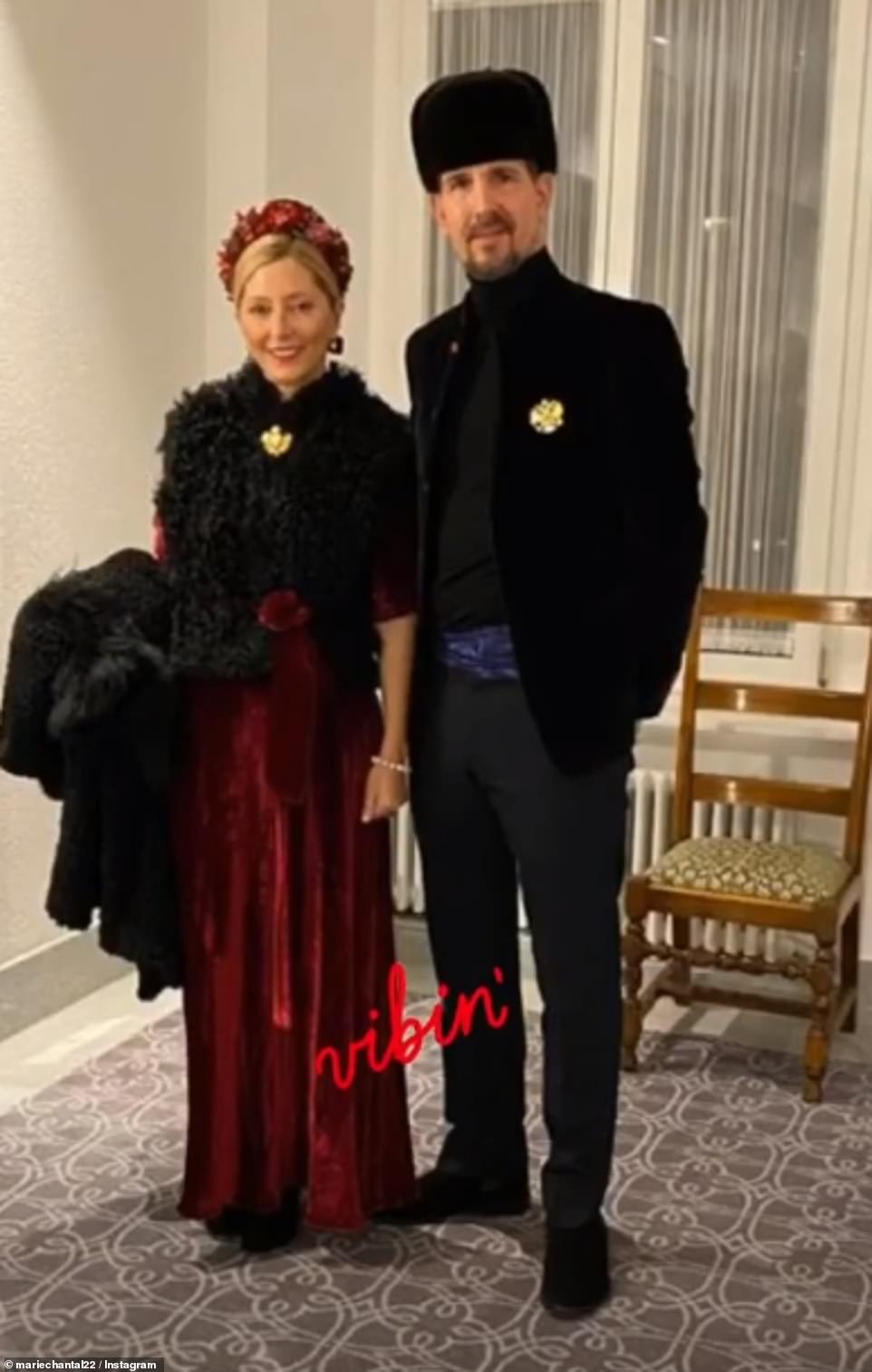 All dressed up: Marie-Chantal, Crown Princess Of Greece also took to Instagram to share her wedding snaps, posing in traditional Russian dress alongside her husband Pavlos, Crown Prince of Greece 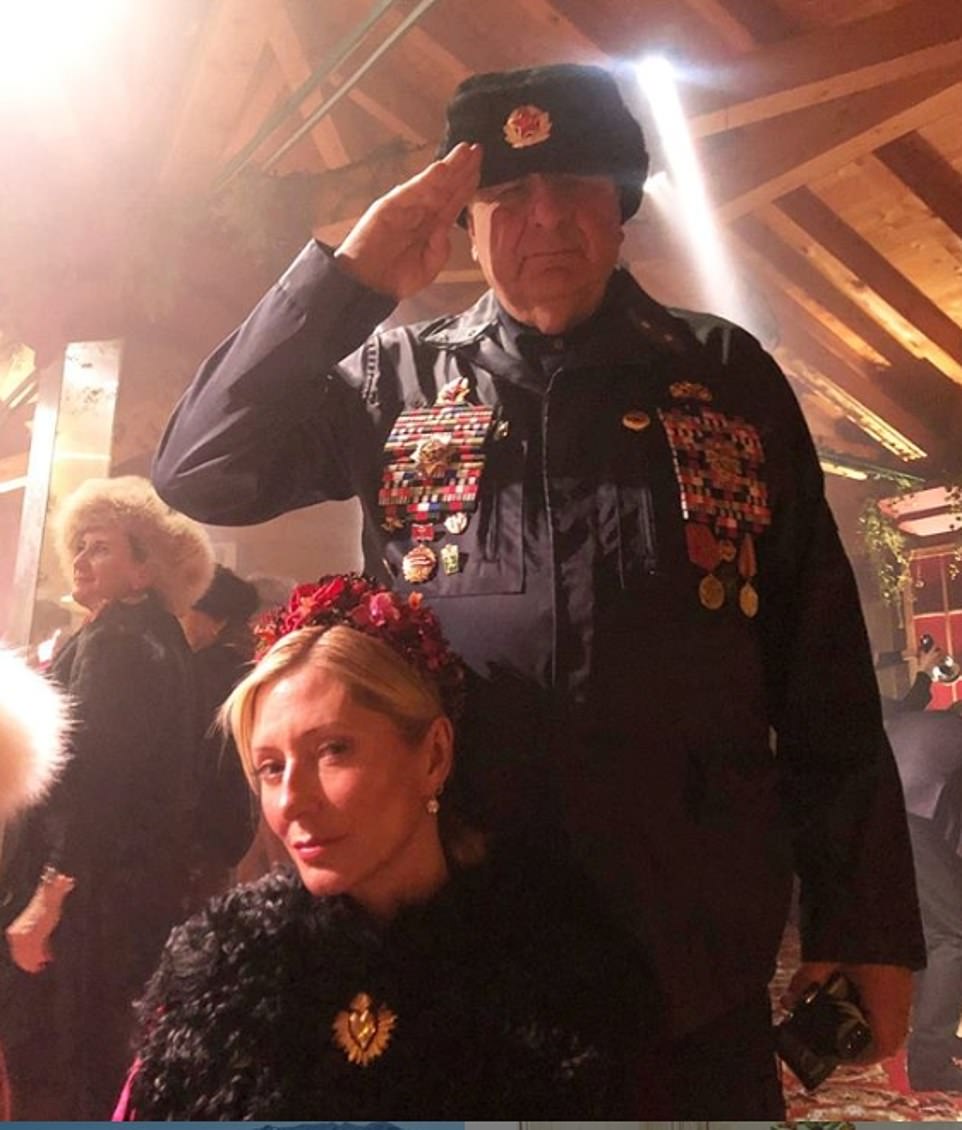 Say cheese: Marie-Chantal looked stunning in a floral crown as she posed with high society photograper Jean Pigozzi for her Instagram

Joining in the party were a string of A-list celebrities including Stella McCartney, Kate Hudson, Princess Beatrice and renowned art dealer Vito Schnabel.

Dasha, 38, who used to be married to Chelsea owner Roman Abramovic, has had two weddings to Stavros, one in Paris last year and Friday night’s event.

Jerry and Jessica Seinfeld , Princess Caroline of Hanover and Miuccia Prada joined the guest list on Saturday evening to join the celebrations, Daily Mail.com can reveal. 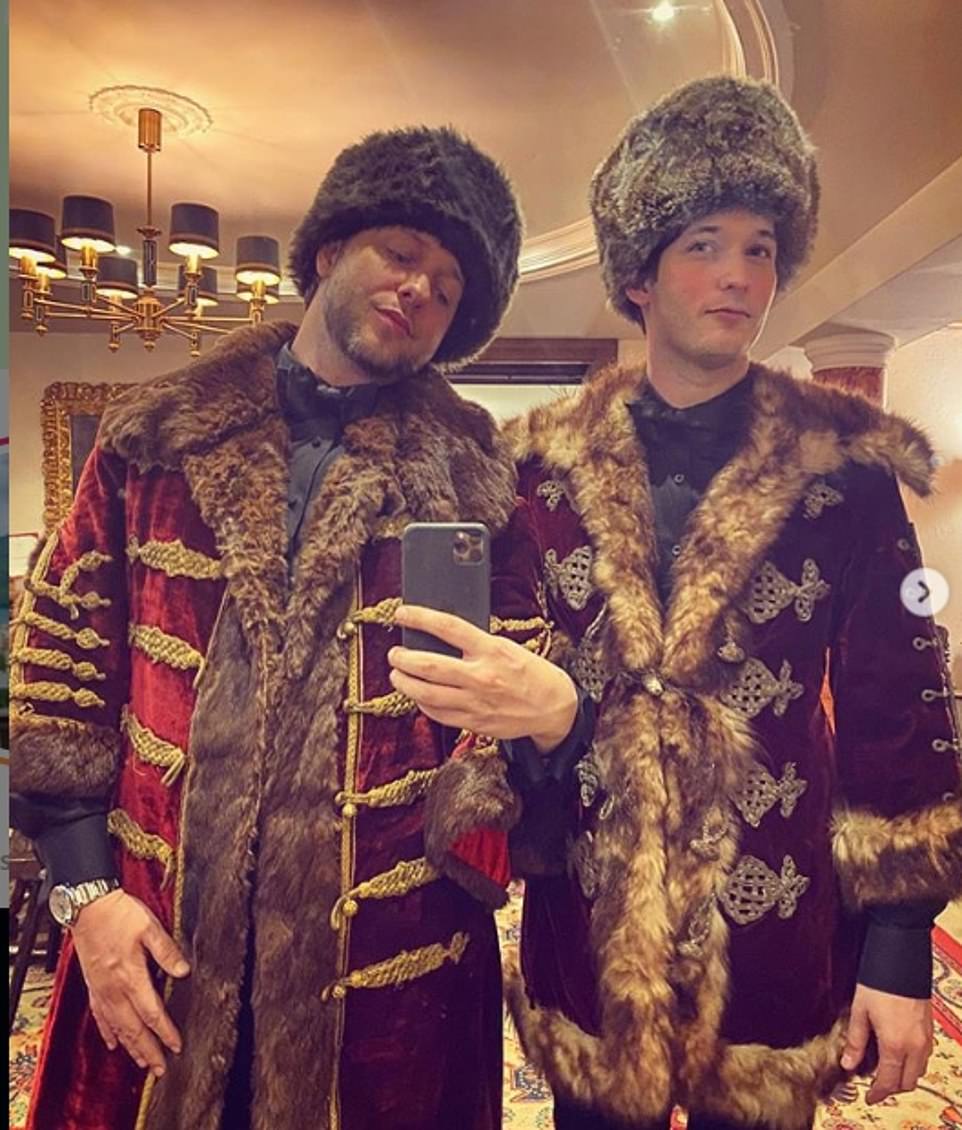 Party spirit: Derek Blasberg shared a photo with his partner Nick Brown, as the couple snapped selfies in their Russian furs

DailyMail.com exclusively reported that Dasha, 38, and Stavros, 34, said ‘I do’ in a specially erected marquee close to St. Moritz’s main ski jump Olympaschanze.

Stavros’s father Stavros Jr and uncle Spyros are the largest private landowners in St. Moritz, with a source telling MailOnline: ‘The Niarchos family are hugely respected and valued in St. Moritz.

‘They could have held the wedding at any fabulous location in the world but have chosen St. Moritz because it is of great importance to them to support the town and the groom’s father is an honorary citizen. 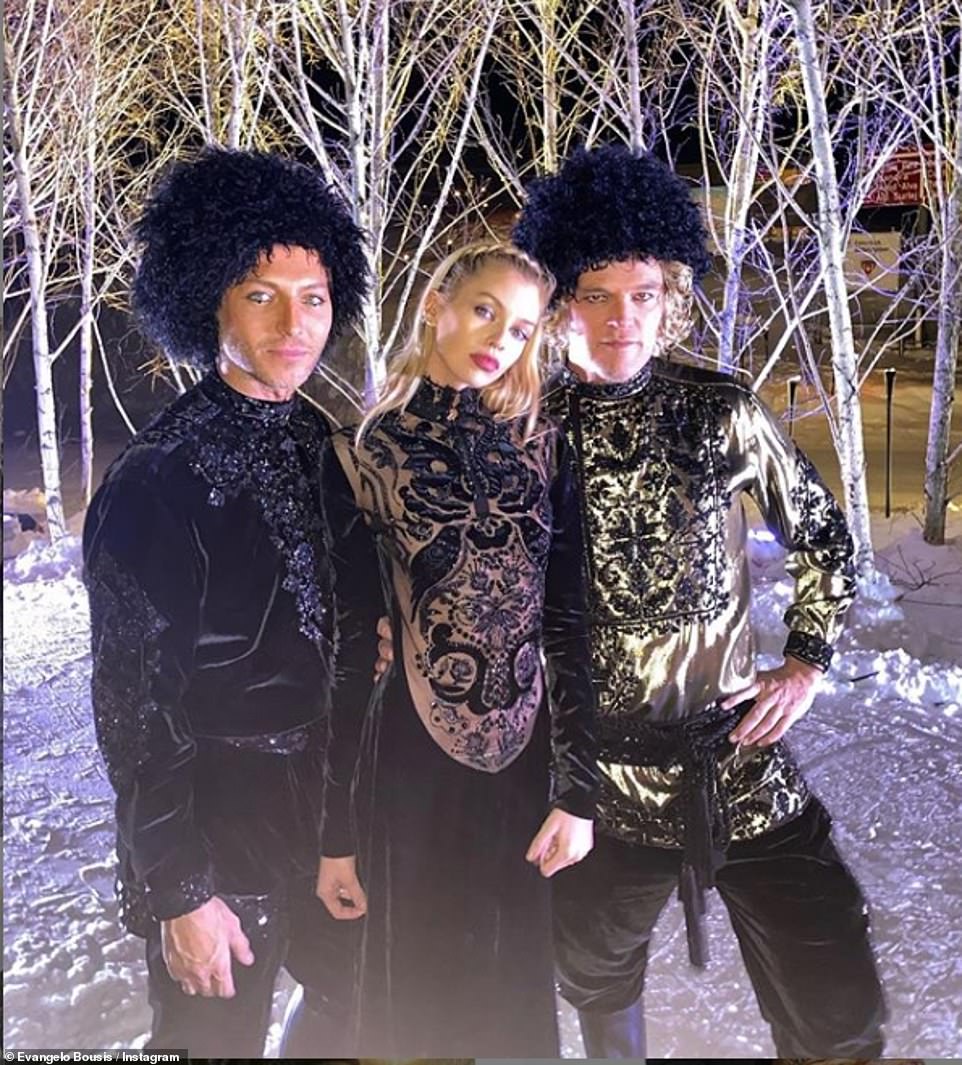 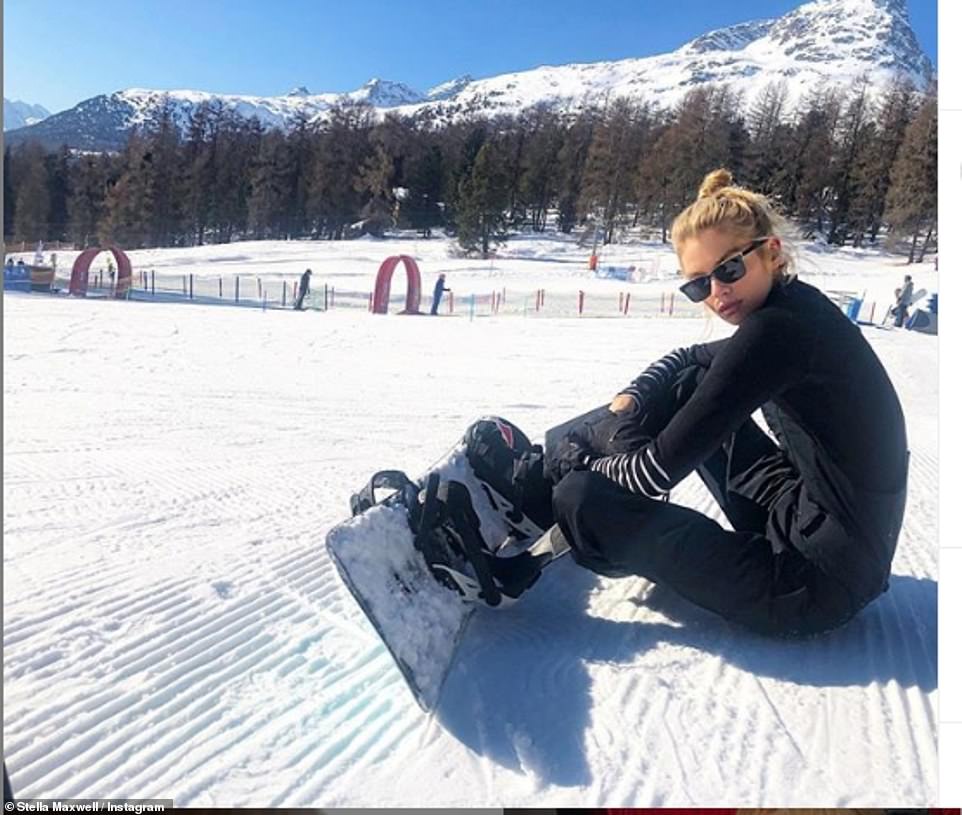 Time to hit the slopes: After partying on Saturday night, the group his the slopes on Sunday, with Stella Maxwell showing off her model poses in the snow 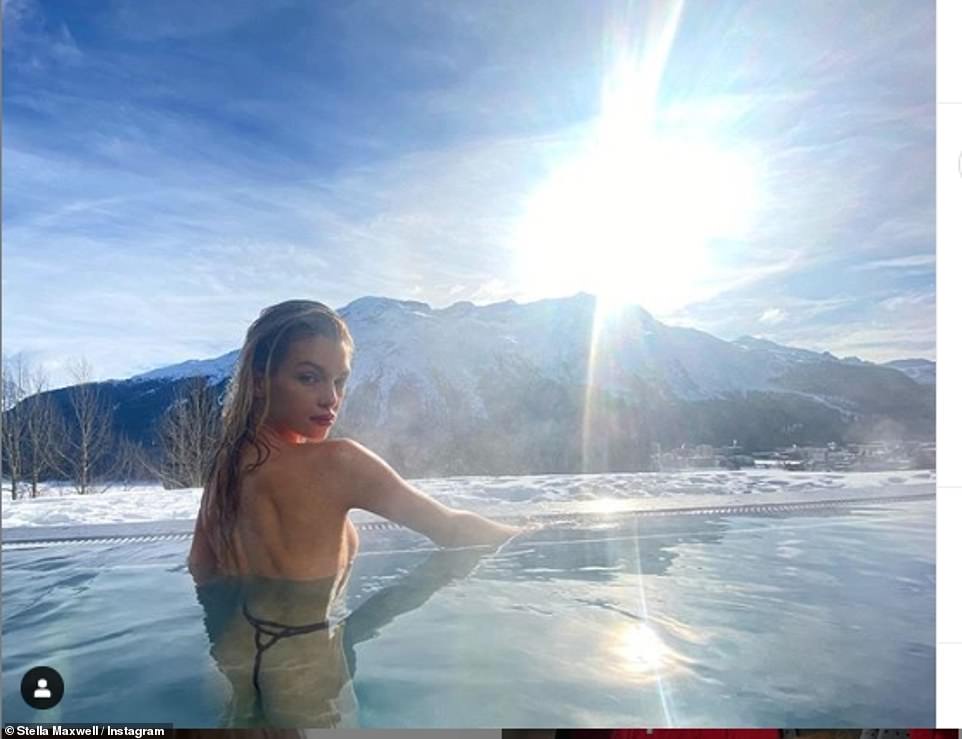 Model looks: Stella also stripped down to bikini bottoms for a swim with a view to round off the lavish weekend

‘I expect the expenditure on this weekend to cost several million pounds and it will be a great boost for the resort too.’

Stavros, who is part of the Greek shipping Niarchos dynasty, has dated a list of celebrities in the past including Paris Hilton, Lindsay Lohan, Mary-Kate Olsen and had a seven-year relationship with Jessica Hart.

Dasha, 38, a successful Moscow-born businesswoman and art gallery owner and Stavros, 34, who was born in New York, had been friends for more than a decade but became a couple after her split in 2017 with Abramovich, with whom she had two children. 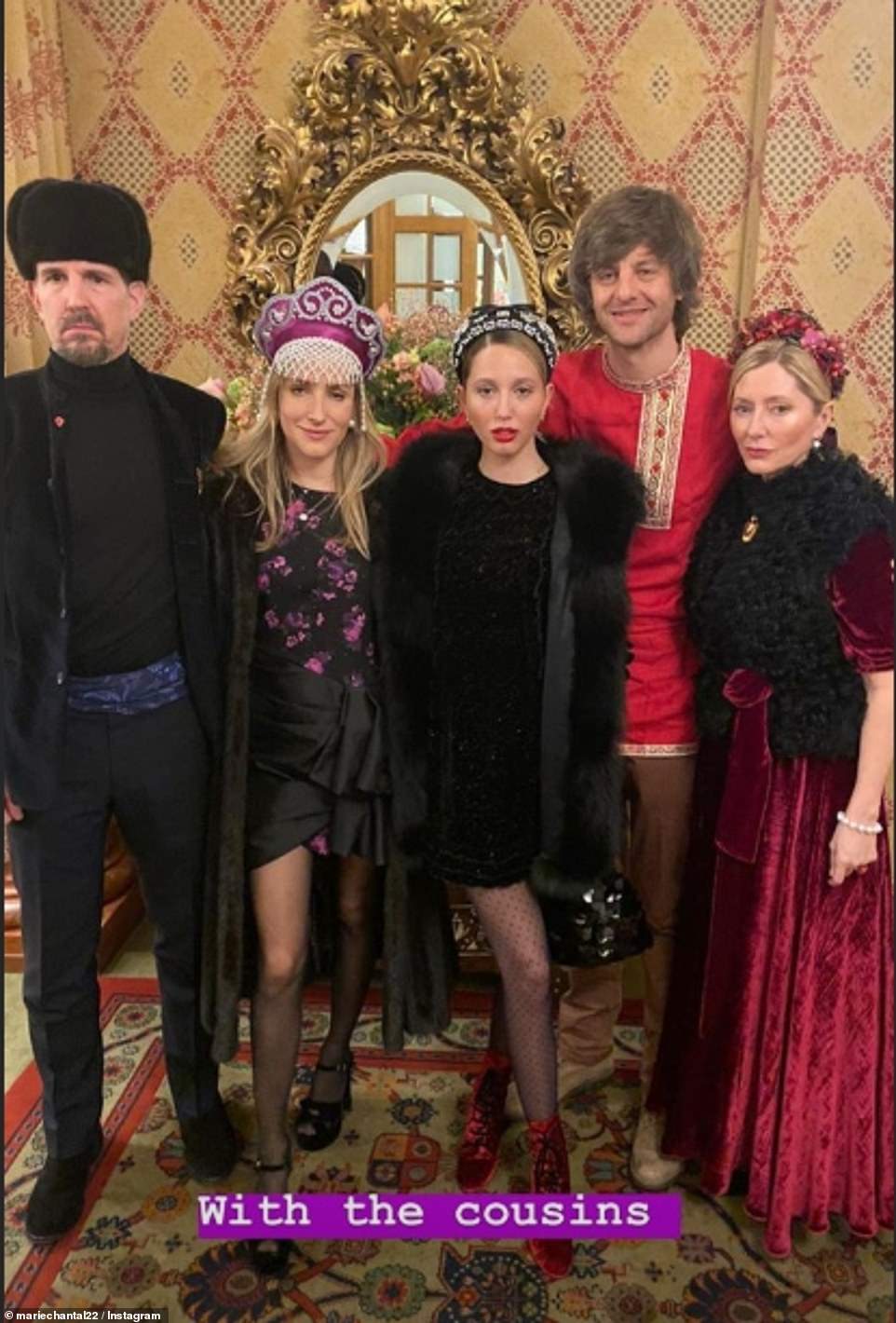 Royalty: Prince Pavlos and Marie Chantal posed for a photo with their daughter Princess Olympia and Prince Ernst August and his wife Princess Ekaterina of Hannover

‘Locals do not generally bother the celebrity visitors. It is only a small town so it is virtually impossible to avoid bumping into them.

‘I expect locals will share a table with a few in the popular Salsastrains restaurants and not notice them openly. It is almost an unspoken code and one of the reasons the fabulously wealthy choose here for such celebrations.

‘St. Moritz itself is the most Swiss of all the Swiss ski resorts. It caters to an old money crowd including generations of Niarchos, Guccis and royalty from all over Europe and the Middle East as well as well as the horsey set.

‘It will be a fabulous party weekend and the folk who live here wish the happy couple all the very best and welcome them.’ 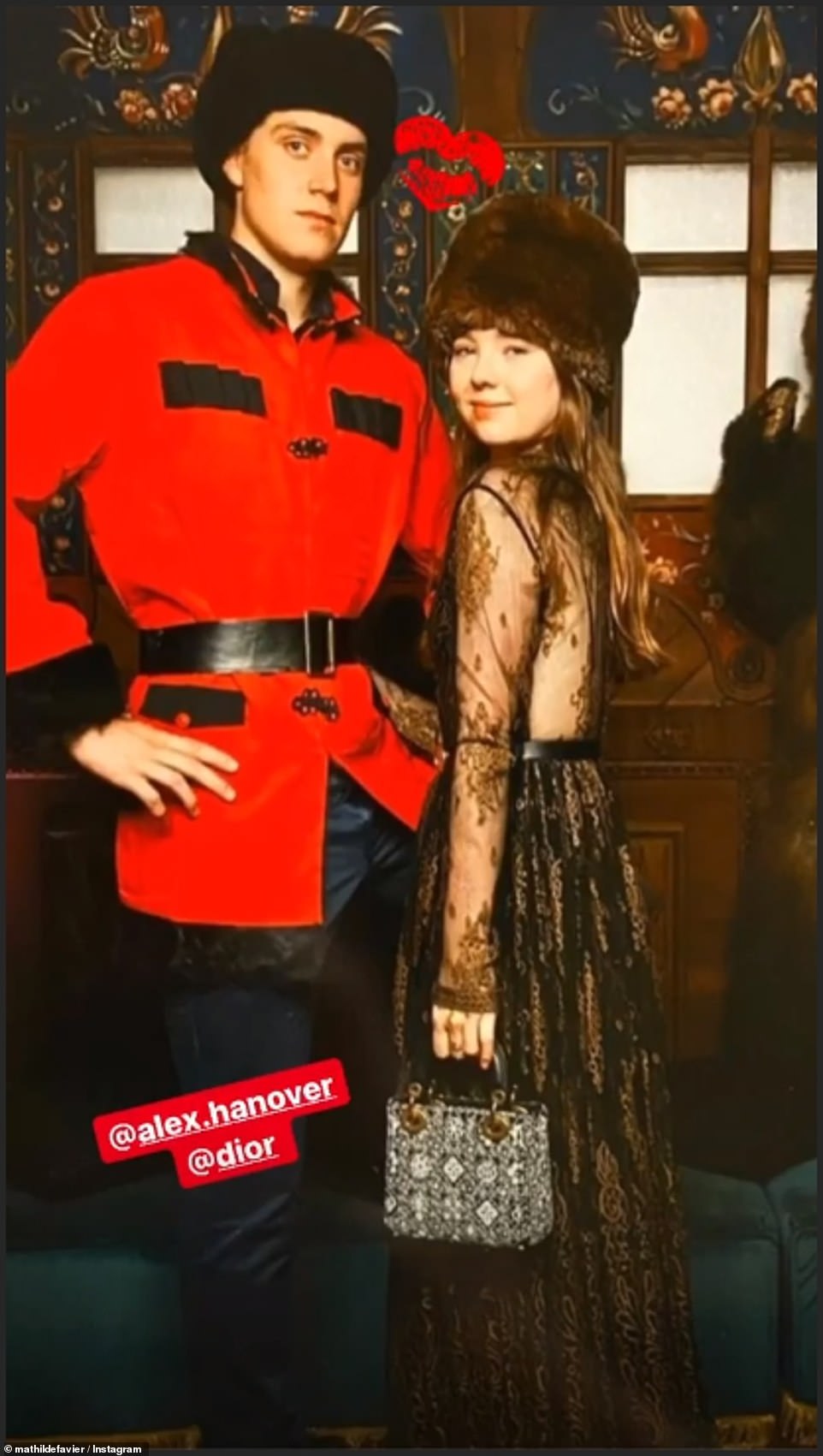