When Jason Wasmund came down with body aches and chills in mid-February, he just assumed he had the flu.

But the next day, his fever hit 103F and he complained of severe pain in his left leg so his wife, Cassie, took him to the emergency room at Kearney Regional Medical Center in Kentucky.

Doctors told Cassie that the father-of-two had contacted a mystery infection that developed into sepsis, when the body attacks its own organs and tissues.

When Jason, 43, didn’t respond to antibiotics after being in the ICU for three days, he was airlifted to the University of Nebraska Medical Center.

There, surgeons amputated his left leg to stop the infection from spreading, but told Cassie he had just a seven percent chance of surviving, reported The Kearney Hub.

Amazingly, Jason did survive – although he is back in the hospital after his stump developed a pus pocket, which will need to cleaned out and sewn back up. 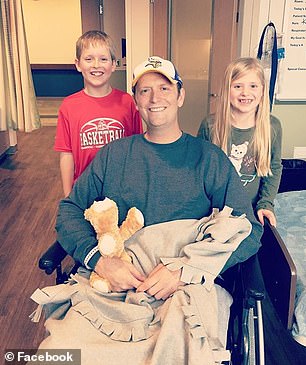 Jason Wasmund, 43 (pictured, left and right), of Kearney, Kentucky, was taken to the ER in mid-February with a fever of 103F and pain in his left leg. Doctors told his wife that he had contracted a mystery infection his left leg, which developed into sepsis 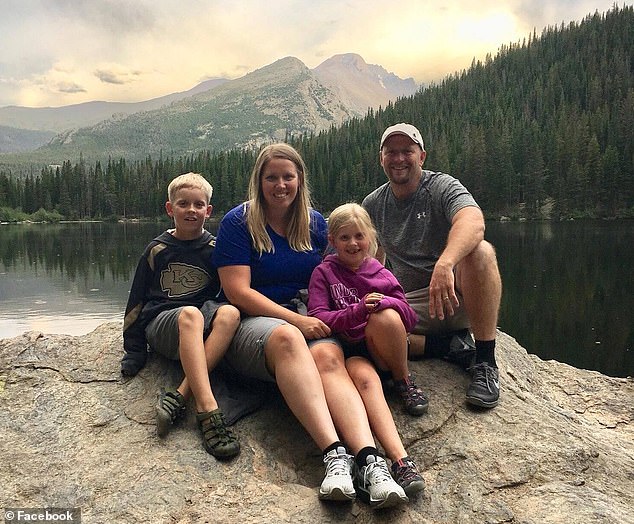 Three days later, Jason was unable to breathe on his own so he was transferred to the University of Nebraska Medical Center and put on a ventilator. Pictured: Jason and Cassie with their nine-year-old son Jaxon (left) and their seven-year-old daughter Jaycee (second from right)

Cassie told the newspaper she started worrying about her husband’s condition in February when he became delirious and couldn’t answer any questions she was asking.

Jason was moved to the intensive care unit the same night that he was admitted to Kearney Regional Medical Center.

‘He went from super-healthy to the ICU by Monday night,’ Cassie told The Hub.

Doctors told her that Jason had contracted an infection in his left leg but that they didn’t know its cause. They suspect bacteria may have remained in his body after an old scrape or wound.

Either way, the infection had spread to his leg and his body was now going into septic shock.

I was screaming at the doctor: ‘You can’t take his leg!’

Sepsis is a life-threatening condition in which chemicals that the immune system releases into the bloodstream to fight an infection cause inflammation throughout the entire body instead.

Many doctors view sepsis in three stages progressing from sepsis to severe sepsis and finally septic shock, which can result in death.

According to the Centers for Disease Control and Prevention (CDC), around 1.7 million Americans develop sepsis every year, and at least 270,000 die.

The CDC also says that one in three people who die in a hospital have sepsis.

Three days later, Jason was unable to breathe on his own so he was transferred to the University of Nebraska Medical Center and put on a ventilator.

Cassie traveled with him to Omaha while her mother watched their nine-year-old son Jaxon and their seven-year-old daughter Jaycee, reported The Hub.

She said the day after Jason arrived in Omaha, doctors told her that they would need to amputate his left leg to stop the infection from spreading.

‘I was screaming at the doctor: “You can’t take his leg!”‘ Cassie told The Hub ‘But I didn’t know the severity of it. They had already taken him [into the operating room] when they called me.’

Jason didn’t wake up until eight days after the amputation and it took an additional two days until he fully regained consciousness.

He told The Hub that he wasn’t told his leg was amputated and his brain didn’t register that it was no longer there.

‘I’d look down and see a leg. My brain still thought it was there,’ he said.

Jason said it finally hit him while he was in physical therapy when he tried to use his left leg to catch himself as he fell backwards, but couldn’t.

Two weeks later, Jason was transferred to the Madonna Rehabilitation Hospital in Omaha where he underwent physical and occupational therapy, learning how to navigate on crutches and in a wheelchair. 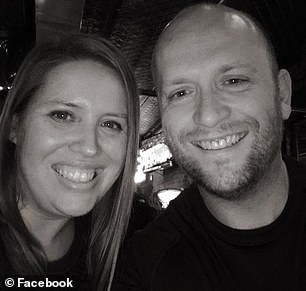 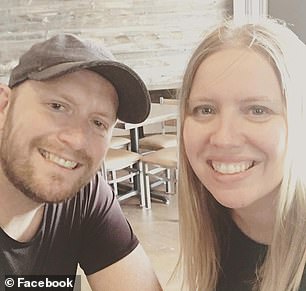 The day after her arrived in Omaha, surgeons were forced to amputate his leg to the knee to stop the infection from spreading. Jason didn’t wake up until eight days after the amputation and it took an additional two days until he fully regained consciousness. Pictured, left and right: Jason and Cassie Surgeons gave the father-of-two just a seven percent chance of survival. Currently, Jason is recovering, but is back in the hospital after his stump developed a pus pocket, which requires surgery to clean out. Pictured, left to right: Cassie, Jaycee, Jaxon and Jason

‘After three days, they allowed me free reign of the place, but a physical therapist was shocked when I stood up and made it to the door with a walker,’ he told The Hub.

Jason was discharged on March 22 and allowed to return home, where his condition remained steady for about a week-and-a-half.

On April 8, he was admitted to the ICU, Cassie wrote in a Facebook post. The next day, she revealed that scans showed a skin abscess (pus-filled pocket) in his stump and an infection in his femur.

On Wednesday, doctors took Jason in for surgery to reopen his wound, clean it, and cut a small portion of the bone if necessary. He will need to be on antibiotics for six weeks to fight any further infection.

‘Please keep him in your prayers,’ Cassie wrote. ‘This is a setback in getting life back to normal and it’s hard to accept.’