The Kentucky teenagers who were filmed mocking a Native American demonstrator and Vietnam war veteran could face expulsion from their Catholic high school, a spokesperson has said.

The Diocese of Covington and Covington Catholic High School condemned the actions of the students and vehemently apologized to Nathan Phillips, in a statement on Saturday.

‘This behavior is opposed to the Church’s teachings on the dignity and respect of the human person,’ the statement read.

‘The matter is being investigated and we will take appropriate action, up to and including expulsion.’

The Indigenous Peoples March in Washington on Friday coincided with the March for Life, which drew thousands of anti-abortion protesters

The 64-year-old was singing the American Indian Movement song of unity near Friday’s March for Life when he was surrounded by a group of teens, who he claimed were chanting ‘build that wall, build that wall’.

Footage of the encounter subsequently went viral, leading to an outcry on social media for the boys involved to be properly reprimanded.

Philips said he felt threatened by the teens when they suddenly swarmed around him as he and other activists were preparing to leave the Lincoln Memorial.

He told told The Washington Post: ‘It was getting ugly, and I was thinking: “I’ve got to find myself an exit out of this situation and finish my song at the Lincoln Memorial.”

‘I started going that way, and that guy in the hat stood in my way and we were at an impasse. He just blocked my way and wouldn’t allow me to retreat.’

Phillips said he noticed tensions beginning to escalate when the teens and other apparent participants from the nearby March for Life rally began taunting the dispersing indigenous crowd. 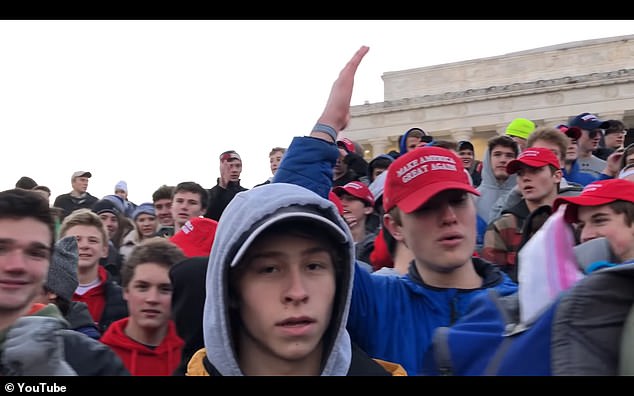 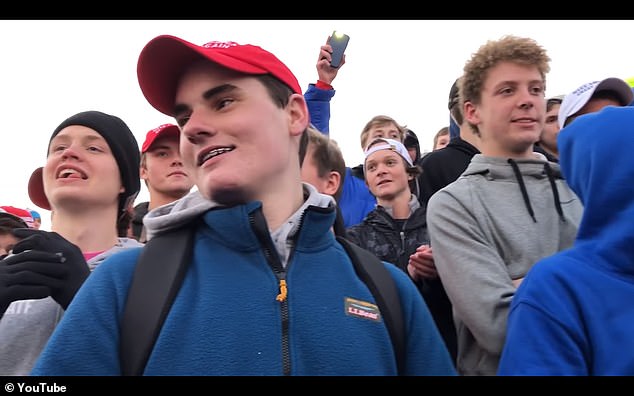 Some of the students were also wearing clothing with Covington logos

However a student from the school who was with the group claimed it was Philips who approached the students for a ‘publicity stunt’. He said Philips had a history of ‘claiming racial harassment.’

In a letter posted on Twitter by a priest named Fr. Jim Sichko, the unnamed student said that his friend who came face-to-face with Philips as Philips stood singing and beating his drum, now faces expulsion for ‘a crime he didn’t commit.’

AThe student wrote: ‘ After that initial occurrence [with Philips], we were then verbally assaulted by four or five African-American men who called us ‘f*****s’ and berated one of our African-American students for being friends with us.

‘The truth needs to come out. A great injustice has been done, and it is our duty to see that the truth prevails.

Philips said he kept singing and thinking about his wife, Shoshana, who died of bone marrow cancer nearly four years ago, and the various threats that face indigenous communities.

He said he was left shaken by the incident on Friday. He added: ‘I’m still trying to process what happened. I’m feeling a little bit overwhelmed.’

He said he hopes the teens will find a lesson in all of the negative attention generated by the videos.

‘That energy could be turned into feeding the people, cleaning up our communities and figuring out what else we can do.’ 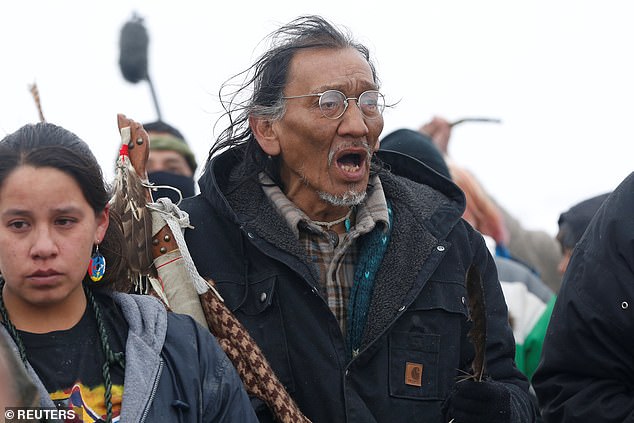 Phillips, an Omaha tribe elder who fought in the Vietnam War and now lives in Michigan, has long been active in the indigenous rights movement.

A co-founder of the Native Youth Alliance cultural and education group, he shows up to Arlington National Cemetery every Veterans Day with a peace pipe to pay tribute to Native Americans who served in the U.S. military.

‘My job has always been taking care of the fire, to keep the prayers going,’ Phillips said.

Philips said he saw only angry faces around him and knew that he was in a dangerous situation.

He told CNN: ‘All of a sudden all of that anger and wanting to have the freedom to rip me apart. That was scary.

‘This young fella put himself in front of me and wouldn’t move. If I took another step I would be putting myself into his space.’ 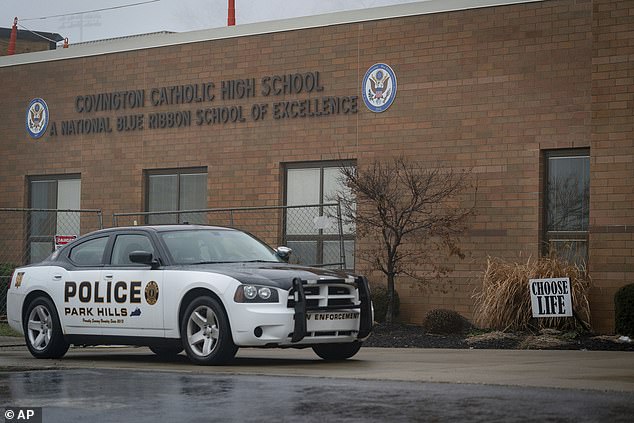 The school (pictured) condemned the treatment of Philips and issued him an apology on Saturday, insisting the students’ actions went against their religious principals 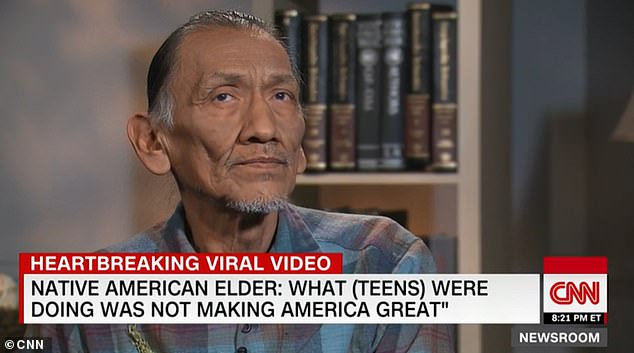 The life-long activist told CNN the teens were doing the opposite of what their hats suggested: they weren’t making America great again

The boys in the video were identified as high school students visiting from Kentucky.

In a statement, the Indigenous Peoples Movement, which organized Friday’s march, called the incident ’emblematic of our discourse in Trump’s America.’

‘It clearly demonstrates the validity of our concerns about the marginalization and disrespect of Indigenous peoples, and it shows that traditional knowledge is being ignored by those who should listen most closely,’ Darren Thompson, an organizer for the group, said.