Khloe Kardashian FINALLY publicly confirms she has reunited with Tristan

Khloe and Tristan were spotted on multiple occasions spending ‘quality time together’ and enjoying a steamy and romantic getaway together in San Lucas, Mexico over the Labor Day weekend.

Following their seemingly successful vacation, the pair made their first public outing together at pal Flo Rida’s birthday party in Miami.

While Khloe and Tristan’s romance was just heating up, the NBA player became a father for the first time.

He welcomed son, Prince Oliver Thompson, into the world with his ex-girlfriend Jordan Craig.

Rumors have continued to circulate that Tristan and Khloe first met when he was still dating Jordan.

Khloe told Mail On Sunday nearly one year since they started dating that she was in the ‘best relationship ever’.

‘I’m in the best relationship I’ve ever been in and it doesn’t take a ring for me to feel that way.’

‘My boyfriend is very protective of me. Feeling loved and validated and secure is a huge thing. Tristan is protective of my entire family, which is beautiful.’

After rumors continued to circulate, Khloe finally confirmed on December 20, 2017, that she was in fact expecting her first child with her boyfriend of one-year.

‘My greatest dream realized! We are having a baby! I had been waiting and wondering but God had a plan all along. He knew what He was doing. I simply had to trust in Him and be patient. I still at times can’t believe that our love created life!,’ she began the lengthy monochrome post.

Khloe continued to gush over her excitement – sharing the news moments before she appeared on the Ellen DeGeneres Show.

Baby on the way: After rumors continued to circulate, Khloe confirmed on December 20, 2017, that she was in fact expecting her first child with her boyfriend of one-year

Season 14 finale of Keeping Up With The Kardashians saw the beauty find out her first born would be a daughter.

‘You’re lying! I don’t feel like I’m having a girl. I’m, like, in a state of shock,’ she said when her sister Kylie Jenner told her the news.

Khloe went on to say that regardless of the baby’s gender she and Tristan would love the tot dearly, adding: ‘She’ll be so cute.’

Out nesting in Cleveland in Tristan’s home, the first of various cheating scandals emerged – just two days before she gave birth.

In pictures and videos obtained by Daily Mail, the athlete was seen kissing another woman in a New York City club.

That same day, TMZ also released older content from October 2017 of the star making out and touching some other females whilst in a hookah lounge in Washington D.C.

Youngest sister, Kylie Jenner, was the one to break the news to Khloe.

At the point the news broke, mom Kris Jenner, sister Kim Kardashian and Khloe’s doctor jumped on a private plane to be with the star.

Despite the drama and intense tension between the family members, Tristan was in the delivery room when Khloe gave birth.

A source told Us Weekly at the time that Khloe was ‘shell-shocked and beside herself’ when she learnt about the cheating scandal.

While Khloe continued to not acknowledge the cheating scandal, she revealed four days after the birth that she had named her daughter, True.

‘Our little girl, True Thompson, has completely stolen our hearts and we are overwhelmed with LOVE,’ she wrote.

‘Such a blessing to welcome this angel into the family! Mommy and Daddy loooooove you True!’

While fans continued to bombard Khloe with questions on while she was still with Tristan, she finally hit out at a Twitter user.

‘You have no knowledge of what goes on in our household or the enormous rebuilding this takes to even coexist,’ she wrote.

‘I’m proud of my strength. I appreciate your opinion and I hope you hold that same opinion to everyone else who has stayed in situations.’ 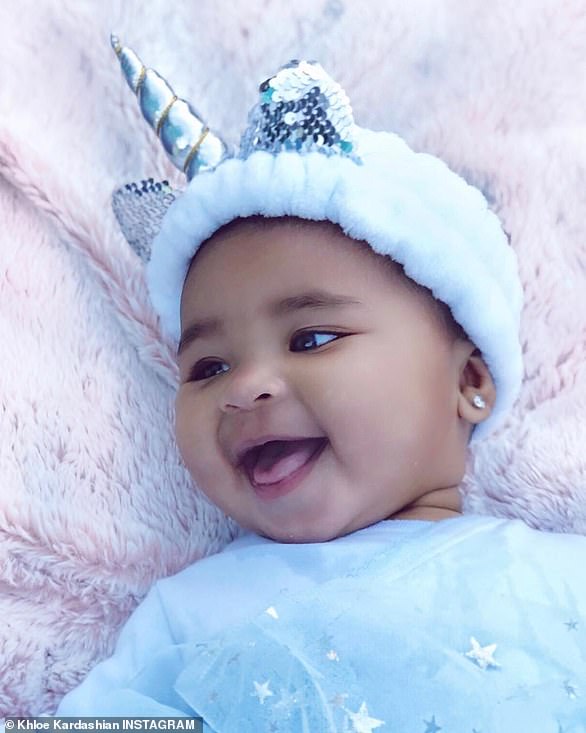 Bundle of joy: Despite the drama and intense tension between the family members, Tristan was in the delivery room when Khloe gave birth to True in April 2018

To the surprise of many, Khloe and Tristan appeared to be more back on than ever during a couple’s retreat with sister Kendall and her on-and-off beau, Ben Simmons.

Khloe and Tristan returned to their happy place, Mexico, where pictures saw them laughing, drinking and enjoying a lot of PDA whilst in the hot tub and on the beach.

Tristan was allegedly at it once again when he stepped out into an LA nightclub.

While Khloe and True spent the night at home, the basketball player was seen ‘touching a random girl’s butt’.

‘Tristan and a girl were chatting and flirting throughout the night. They were very touchy-feely. He had his hand on her butt,’ reported an insider to Us Weekly.

Despite rumors the pair had split for good, with Khloe now permanently living in LA and Tristan mostly in Cleveland, the beauty and True headed off to spend Thanksgiving with him.

‘Happy thanksgiving from my family to yours #GiveThanks #blessed’

And it wasn’t long before Khloe hit out at a fan that tensions between the Kardashian/Jenner siblings was the reason she fled to Ohio.

‘Y’all are reaching now,’ she tweeted on November 23. ‘I’ve spent the past 3years in Cleveland for Thanksgiving … My sisters and I are perfectly fine thank you! All of their families were able to travel but TT being in season, he can not.’

With Khloe back to posting her cryptic quotes on Instagram, fans were quick to suspect things had once again gone pair shaped between in the romance department.

It was reported that Khloe spent Valentine’s Day alone with Tristan allegedly flirting up a storm with other women in a Los Angeles bar.

TMZ  then reports that Tristan ‘cheated on Khloe’ with none other than sister Kylie’s best friend, Jordyn Woods.

While hosting a party at his LA home, Tristan was seen locking lips with the 21-year-old, according to sources who spoke to Hollywood Unlocked.

‘Thompson and Woods were all over each other, and, it wasn’t just “friendly,”‘ the party attendee divulged. 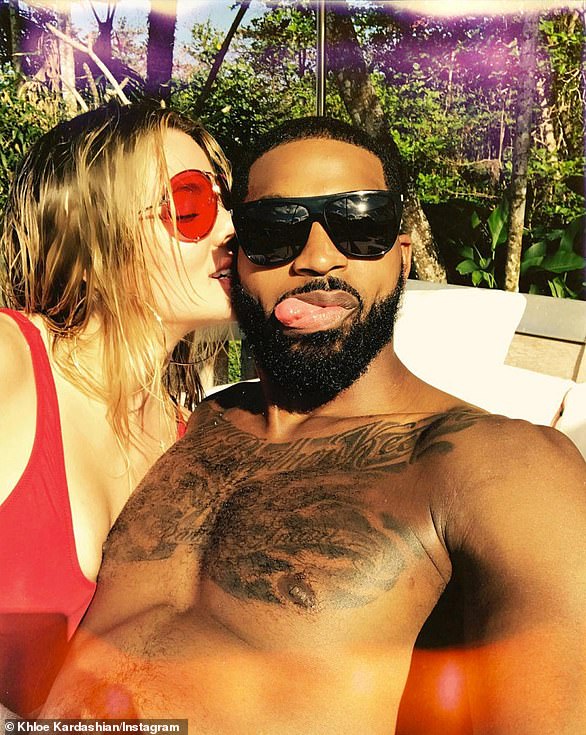 Still together: To the surprise of many, Khloe and Tristan appeared to be back on in July 2018 a few months after the birth of True and the cheating scandal

Tristan is accused of fathering a child with model Kimberly Alexander, who claims he is the dad of her five-year-old son

Sources close to the NBA star say the he did have a one-night stand with Kimberly but around 2011-2012, which does not match up with the age of her son

The NBA star takes a paternity test, which comes out negative, but Kimberley claims the lab falsified the results on account of its Kardashian connection.

In May, Tristan files a libel lawsuit against Kimberly after she continues to insist he is the father.

The filing describes Alexander as a ‘wannabe social media influencer and pornographic model/performer who is so desperate to achieve her fifteen minutes of fame that she recently fabricated a false claim that NBA star/Cleveland Cavaliers center/power forward Thompson is the father of her nearly five-year-old son,’ according to People.

LOCKED DOWN TOGETHER: March 2020

Amid the global coronavirus pandemic, Khloe and Tristan decided to isolate together at her California mansion so that they can co-parent, True.

However, Khloe denied they reconciled after posting an Instagram with True captioned: ‘The only thing I need you to remember is how much your daddy and I love you!’

Asked by a fan, ‘Does this mean there [sic] back together’, Khloe replied: ‘It means her parents love her beyond measure.’

Khloe revealed she has no desire to date again after splitting from Tristan and has been single for a year.

Speaking to mum Kris on KUWTK, she said: ‘I have friends that are like, “I wanna hook you up with someone,” and I just don’t care.

‘I’m focused on myself and True and like, that’s just what I do. Who knows, maybe I’ll never date again.’

Khloe admits she is considering having another baby with Tristan, despite the fact they are separated.

An episode of Keeping Up With The Kardashian saw Tristan reveal he is ‘on board’ with being a sperm donor after the reality star freezes her eggs.

In a confessional, Khloé admitted: ‘I have no idea what my future holds with Tristan and I, but I really feel a lot better knowing, ”Ok, I have five embryos in a freezer. If I want to use them, I have them there”.’ 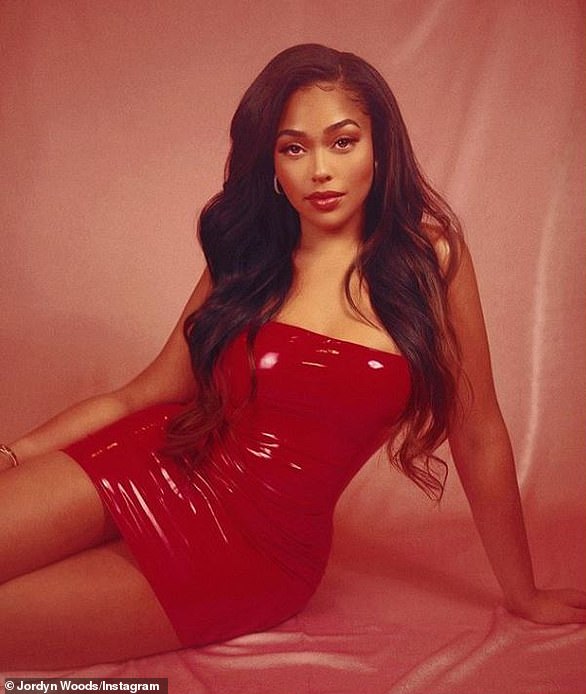 Is she the reason for the split? It’s reported that Tristan ‘cheats on Khloe’ with none other than sister Kylie’s best friend, Jordyn Woods

Khloe and Tristan put on a ‘very cosy’ display at a mutual friend’s birthday party, but sources claim they are not together.

In a video obtained by TMZ, the pair are seen standing next to one another with their arms around each other while singing and filming the birthday celebration

Khloe sparked engagement rumors with Tristan after sporting a ‘huge rock on her ring finger’.

Khloe posted photos from her 36th birthday party wearing a massive pear-shaped diamond with fans immediately flooding the comments to ask if Tristan had popped the question.

However, a source later told UsWeekly that they are ‘not engaged.’

The reality star celebrated her birthday with a small gathering of family and close friends, where she ‘acted like were back together,’ with Tristan, an insider told People.

After living together in lockdown, Khloe and Tristan are ‘giving their relationship another try,’ a source tells People.

They add:  ‘Tristan is working hard to prove himself and has been a great dad to True’, which appears to have swayed Khloe into giving him another chance. 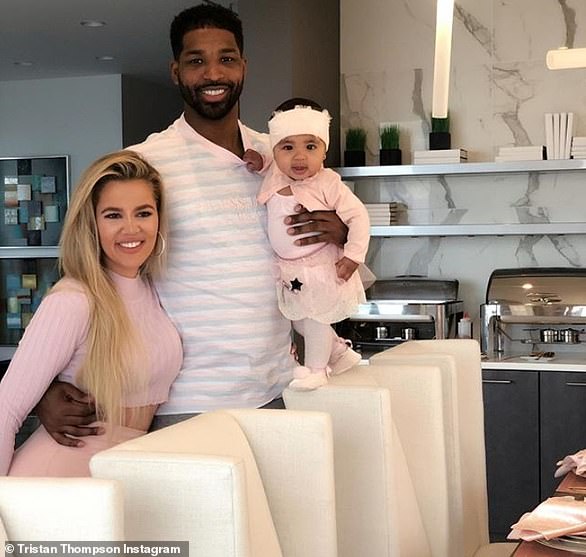 Thankful: After living together in lockdown, Khloe and Tristan are ‘giving their relationship another try,’