Kim Kardashian and the art of distraction: Just divorced star almost spills out of her TINY bandeau

Kim Kardashian made a very splashy fashion statement as she shook off the drama surrounding her ex Kanye West and scandal-ridden fashion brand Balenciaga.

The reality sensation, 42, bared her very trim waist in a very sexy look as she arrived to Gekko restaurant during Art Basel on Thursday.

Kim took Miami by storm as she arrived to the eatery in a tiny black bandeau top and white and blue racer pants with black leather boots skimming her thighs.

She rocked a head full of long blonde hair which cascaded down to her waist in loose, beachy wisps.

The mom of four rocked a golden tan, matte-hued lips, and a pair of boxy black shades over her eyes.

As for her nails, she opted for the long claw trend in a shade of light tan.

Khloe also turned heads in a skin-clinging black bodysuit that zipped down to her naval and flashed a hint of side boob. 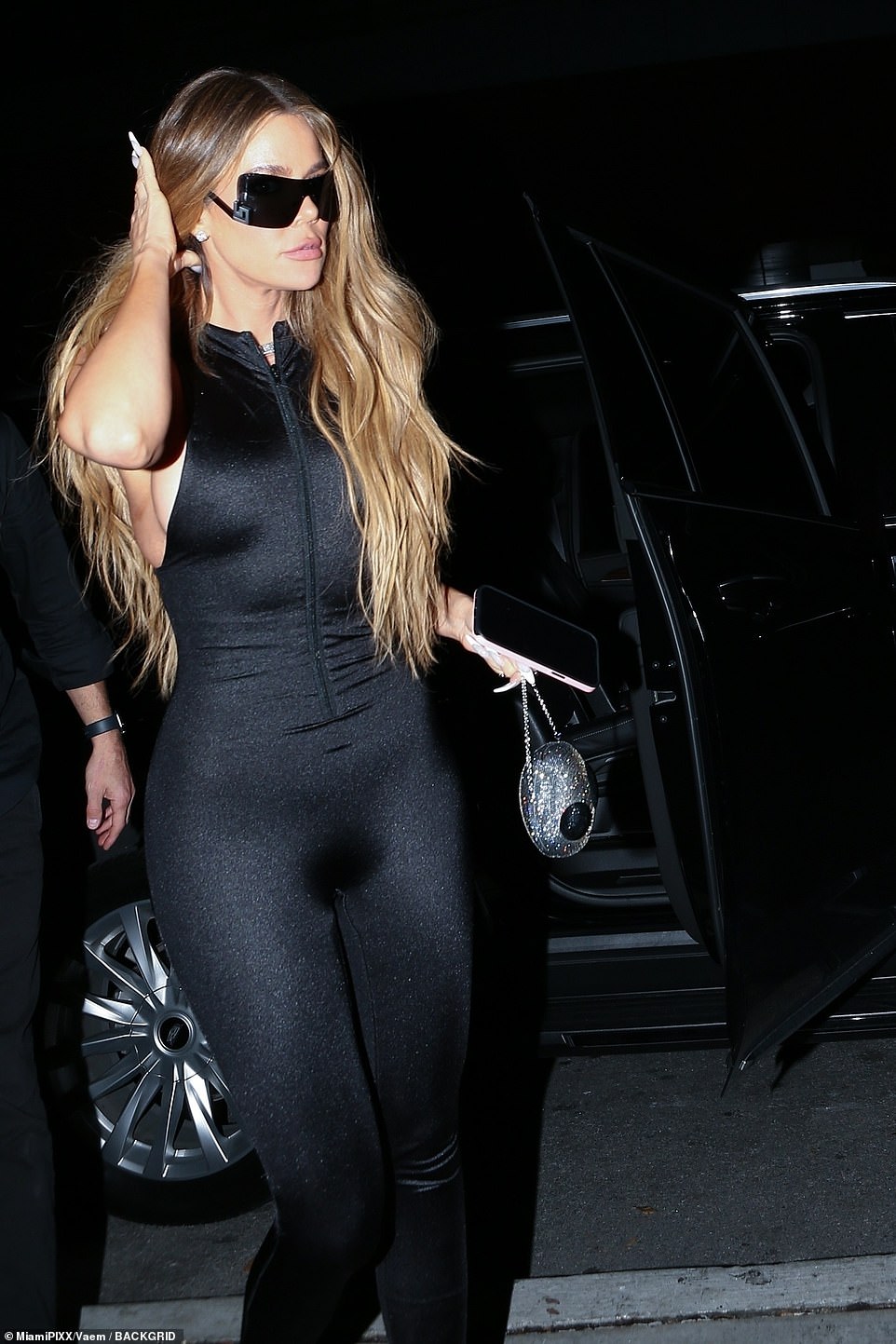 Sister act! Khloe Kardashian turned heads in a black bodysuit that zipped down to her naval

A-list fashion: All eyes were on the social media sensations as they made their grand entrance to the restaurant

She too concealed her eyes with large black sunnies and also worked a lengthy French tip manicure.

Taking her outfit to the next level, she toted around a smiling alien clutch that dazzled in the night sky.

It has been a tumultuous few days for Kim lately.

The outing comes after her ex-husband appeared to have a ‘full mental health breakdown’ on Alex Jones’ podcast alongside white supremacist Nick Fuentes, where he spouted more anti-Semitic bile and encourage people to visit R. Kelly and Weinstein in prison. 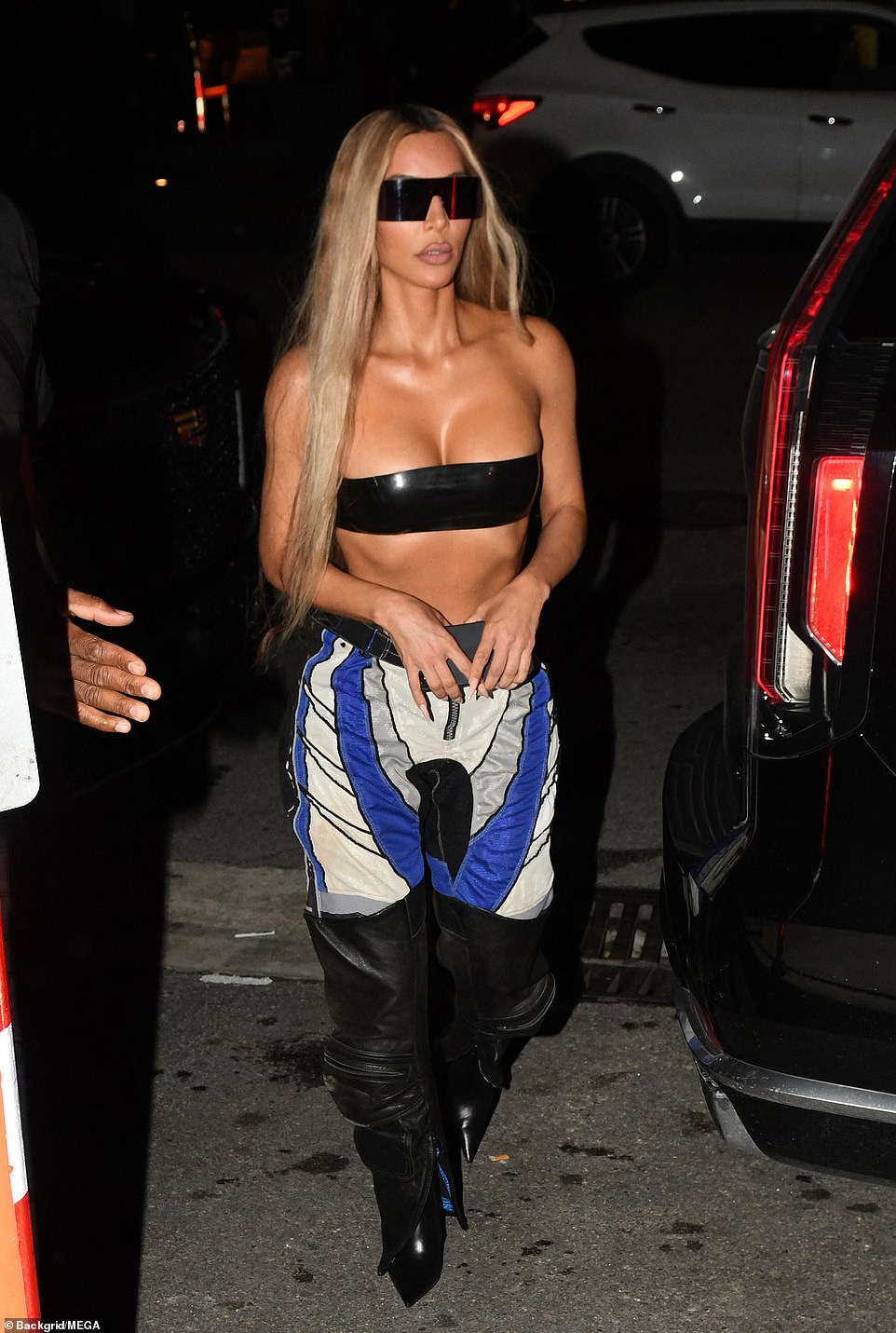 Sun-kissed: Kim displayed a golden tan and her defined abs

Kim and Kanye have also finally settled their divorce after an ugly public battle that raged on for almost two years since they split.

Kardashian will be getting $200,000 in child support monthly, TMZ reported on Tuesday after reviewing court docs. West, 45, and Kardashian will share joint custody and have ‘equal access’ to their four kids North, nine, Saint, six, Chicago, four, and Psalm, three.

Insiders told TMZ that Kardashian will have custody of the children most of the time.

Under terms of the agreement, West will be responsible for 50 percent of the educational and security expenses for the four kids. 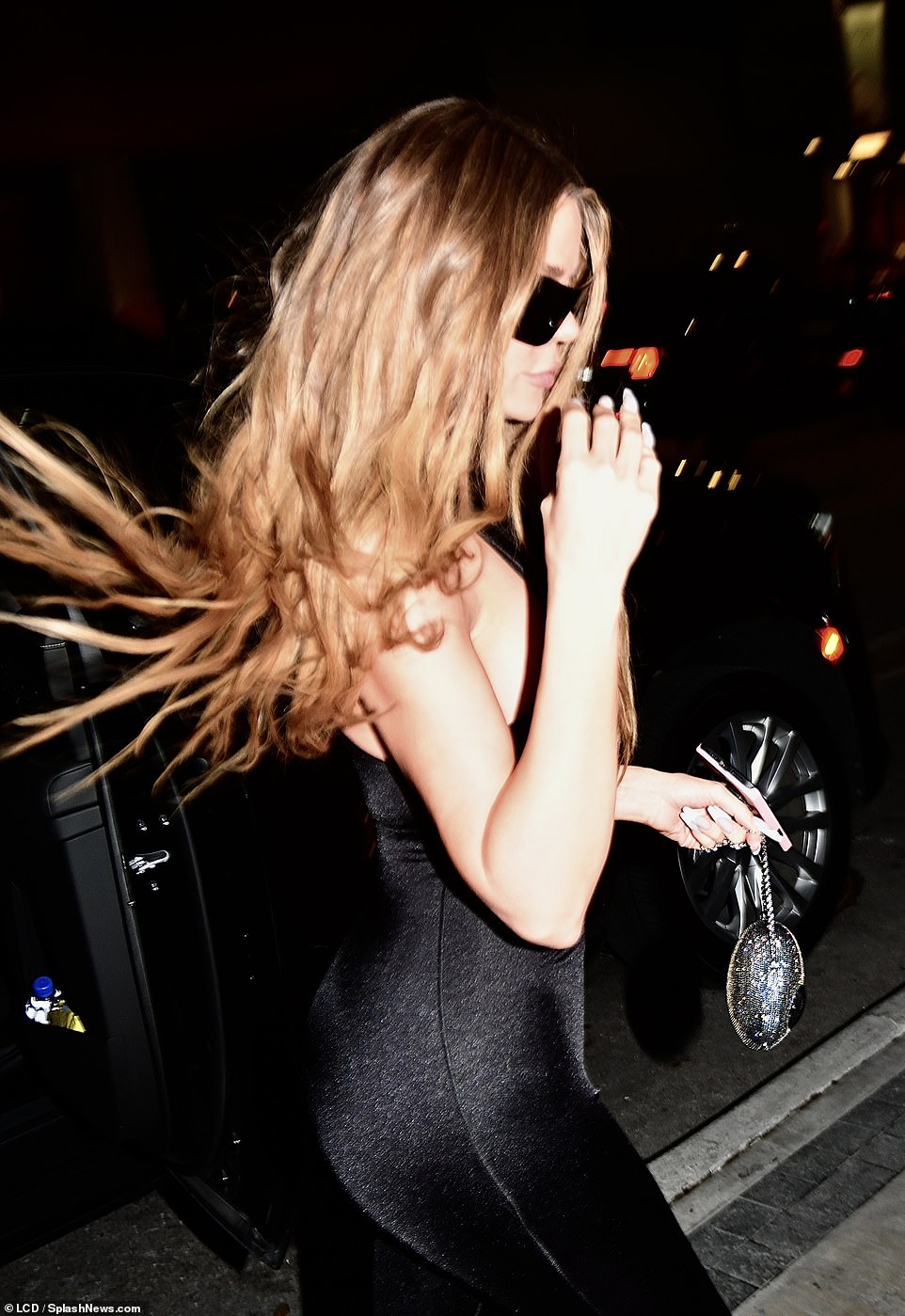 Miami heat! Khloe was a vision as she enjoyed some time with her sister

West and Kardashian agreed to attend mediation should they have a parenting disagreement, according to the outlet. Should one not attend the session, the attending parent will get to make the decision on the topic at hand.

The $200,000 monthly payment must be wired into Kim’s account on the first day of every month.

Both West and Kardashian waived receiving spousal support per the agreements of the prenuptial agreement they signed prior to their marriage, the outlet reported.

In the divorce settlement, West agreed to transfer Kardashian the title of a $4.5 million home next to where Kardashian lives in Southern California, according to TMZ. 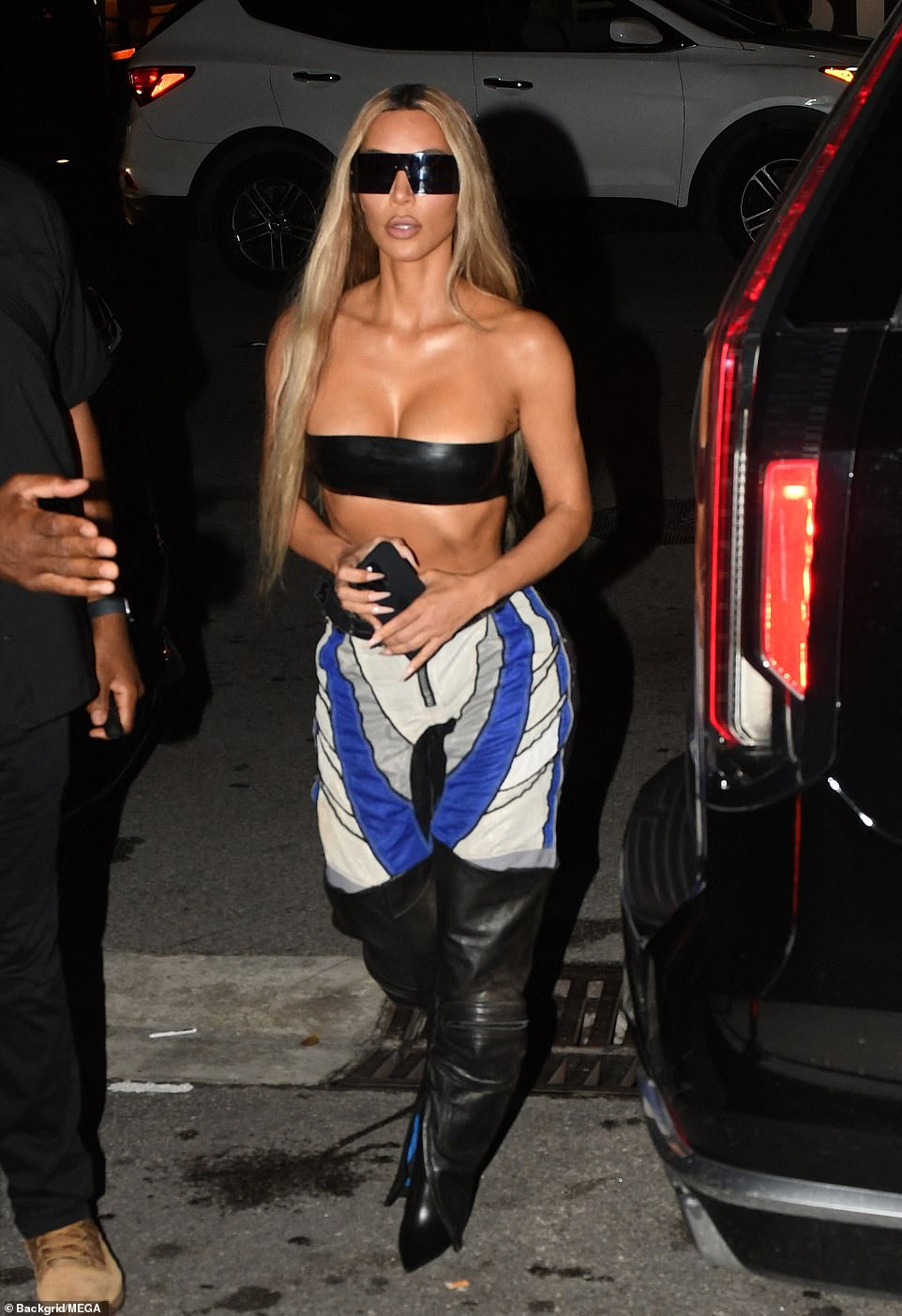 Hello gorgeous! The mom of four rocked a golden tan, matte-hued lips, and a pair of boxy black shades over her eyes

Kardashian will now be the owner of the five-bedroom home, which spans 3,650 sq. feet. She is expected to tear down the home – which West said he bought to be closer to his kids – as it is in need of multiple renovations.

In addition to the home next door, Kim will retain rights to the $60 million estate in Hidden Hills, California she lives in with the kids, as well as property in Idaho.

In the pact, West will retain ownership of a $60 million Malibu beach home; a pair of ranches he owns in Wyoming; 300 acres in Calabasas, California; a home in Belgium; and the Chicago home he grew up in.

Gym honed: Khloe displayed all the results of her many workouts in her skin-tight look

Sources told the outlet that Kardashian has tried in vain to reach an overall divorce agreement with West over the part year, but he continually refused ‘to participate in resolving’ the matter.

‘Kim’s patience was tested, but she handled things calmly and ultimately Kanye came around,’ the source told the outlet.

According to the outlet, Kardashian’s lawyer Laura Wasser was key in mediating between the parties to nail down an agreement between the exes.

Had they not settled, West would have had to give a deposition in the case and a trial would have commenced next month.