EXCLUSIVE PICTURES: Kim Kardashian heads straight to LA photoshoot after flying back from Wyoming… as it’s revealed she urged Kanye West to quit presidential bid and feels ‘trapped in marriage’

Kim Kardashian West arrived at the studio is Los Angeles on Tuesday, after flying back from Wyoming earlier this week, where she held marriage crisis talks with her troubled husband Kanye West.

The 39-year-old reality star was dressed down in white sweatpants with her tied back in a bun as she exited her vehicle in LA, where she was believed to be overseeing a photoshoot for her SKIMS line.

The sighting comes after a report by PEOPLE Magazine that Kim feels ‘trapped in her marriage’ to Kanye, 43, who suffers from bipolar disorder, and she ‘doesn’t know what to do’ following his erratic outbursts at his political campaign rally and Twitter meltdown.

Back to work: Kim Kardashian arrives at LA studio for a SKIMS photoshoot on Wednesday after flying back from Wyoming amid ongoing drama with husband Kanye West

‘Kim feels trapped,’ source tells the publication. ‘She loves Kanye and she thinks of him as the love of her life. But she doesn’t know what to do.’

The source adds: ‘She knows that it’s not healthy for her to be around him now, and it’s honestly not healthy for the kids. He needs to get his stuff together before he can be any sort of partner or father.’

Kim’s six-year marriage to Kanye has been put under more strain than ever this month, after he claimed at his first presidential campaign rally that they considered aborting their first child, North, and then later accused Kim of having an affair with rapper Meel Mill.

The show must go on: Kim, 39, arrived at what appeared to be a photoshoot for her SKIMS line

Though Kanye has since publicly apologized for his behavior and outbursts, it seems that Kim is still in limbo and her next steps in the marriage.

A separate report from PEOPLE claims that Kim tried to persuade Kanye against his controversial presidency bid.

‘Kim urged Kanye to not move forward with running for president, but he won’t listen,’ their other source claims.

Meanwhile a Wednesday report from UsWeekly claims the couple were spending ‘weeks apart’ even before their drama, which saw Kim jet into Wyoming this week where they had a blazing row near a Wendy’s restaurant.

‘Kanye has been in Wyoming for the last year. Kim goes about once every five weeks and brings the kids,’ a source claims to the outlet. 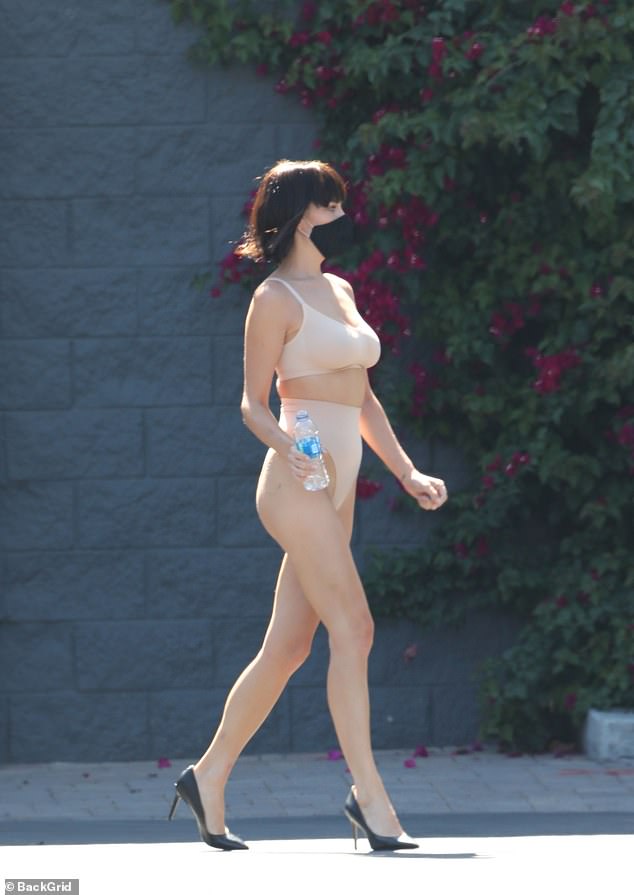 Work: A model is seen wearing Kim’s SKIMS range outside a studio, where the reality star flocked to after arriving back in LA

Model behavior: A model was seen wearing Kim’s range suggesting the reality star is throwing herself back into work mode

‘When together, things are fine between them but they haven’t been spending time together because he moved his life completely to Wyoming and that’s not where their life is, their family is, their kids are in school or the larger family is.’

A source told Dailymail.com that Kim is back in LA to be with the kids while Kanye finishes up his latest album.

Kim flew to Kanye’s Cody, Wyoming compound on Monday to speak to him. Things appeared overwhelming for the star, who was seen crying during a conversation with West.

‘She is very emotional about everything, and also exhausted,’ a source told People magazine Monday. ‘She feels very hurt by Kanye. She has tried to reach him multiple times and he just ignores her. It’s all a bad situation.’ 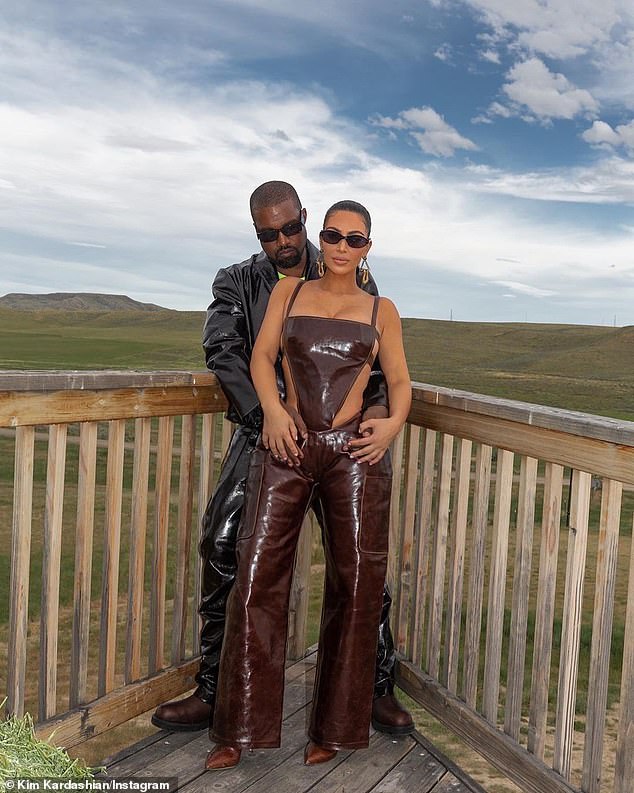 On Sunday Kanye publicly said sorry to his wife via Twitter.

‘I would like to apologize to my wife Kim for going public with something that was a private matter. I did not cover her like she has covered me. To Kim I want to say I know I hurt you. Please forgive me. Thank you for always being there for me.’