Kim Kardashian is wishing her followers a happy Saturday with some carefree bikini pics.

The 40-year-old seemed to be feeling a bit lighter amid her divorce from Kanye West as she shared some unseen vacation snaps featuring her daughter North, seven.

Her famous curves on display in the copper two-piece, she wrote, ‘Have a good day!’ before promoting her SKIMS line with help from her sisters.

Carefree: Kim Kardashian, 40, flashes her famous curves in a copper bikini as she shares unseen vacation snaps while wishing her followers a ‘good day’ amid her divorce from Kanye West

The photos appeared to be from her family vacation to Turks & Caicos at the end of January, an escape from her marital woes and reported ‘imminent’ divorce from West.

She appeared makeup free with beachy brown tresses as she scrunched her face, throwing on a pair of brown sunglasses in a second snap while cradling North — who recently acquired a bearded dragon named Speed that was given the full SKIMS treatment in a custom pink hoodie.

Yesterday Kim spoke out about her body issues throughout her first pregnancy saying she felt ‘insecure’ after her body began to ‘swell uncontrollably’ and she gained 60 pounds.

‘I had this fear of wondering if I would ever get my pre baby body back,’ she wrote about her 2013 self.

Four kids later (two via surrogacy) she undoubtedly has maintained her figure, but the same cannot be said for her seven-year marriage. 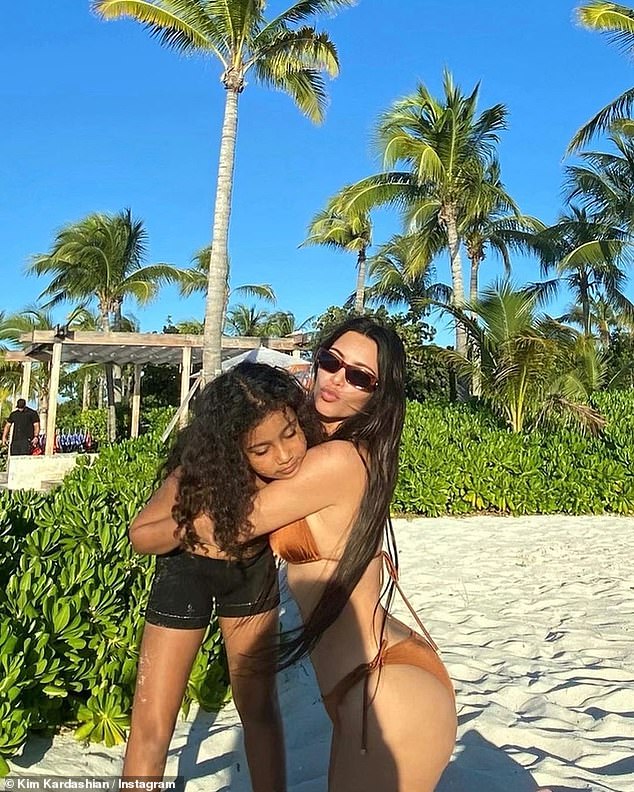 Mommy’s girl: She cradled her eldest daughter whom she shares with West who looked content in her famous mother’s arms 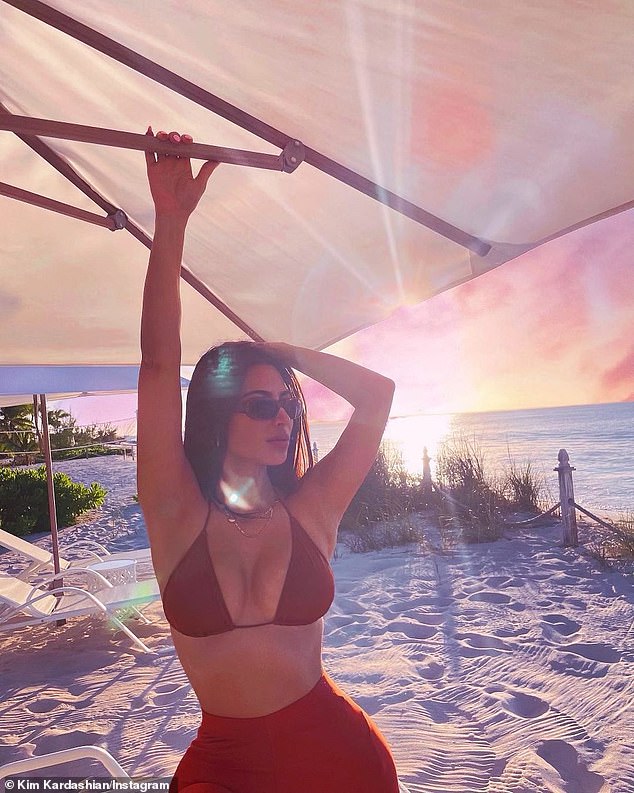 Color of choice: She had previously shown off the copper two piece in another throwback snap 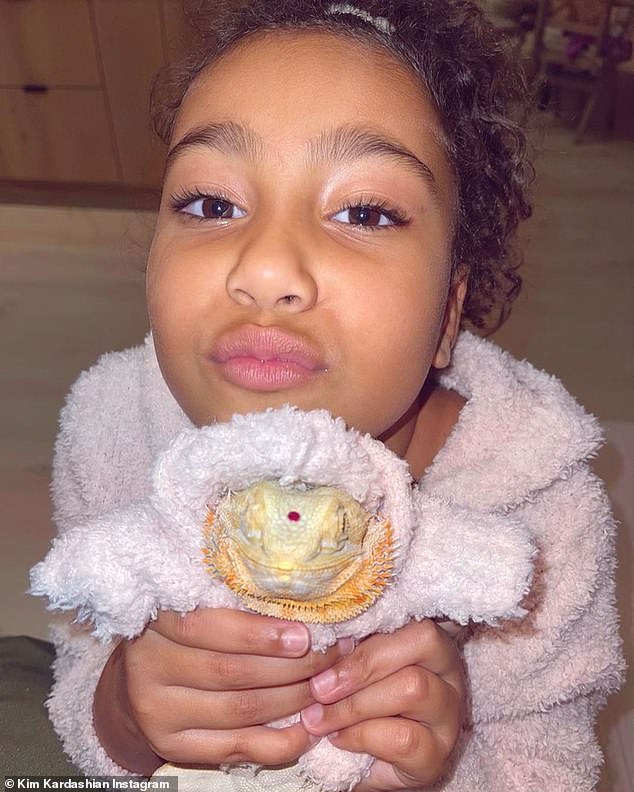 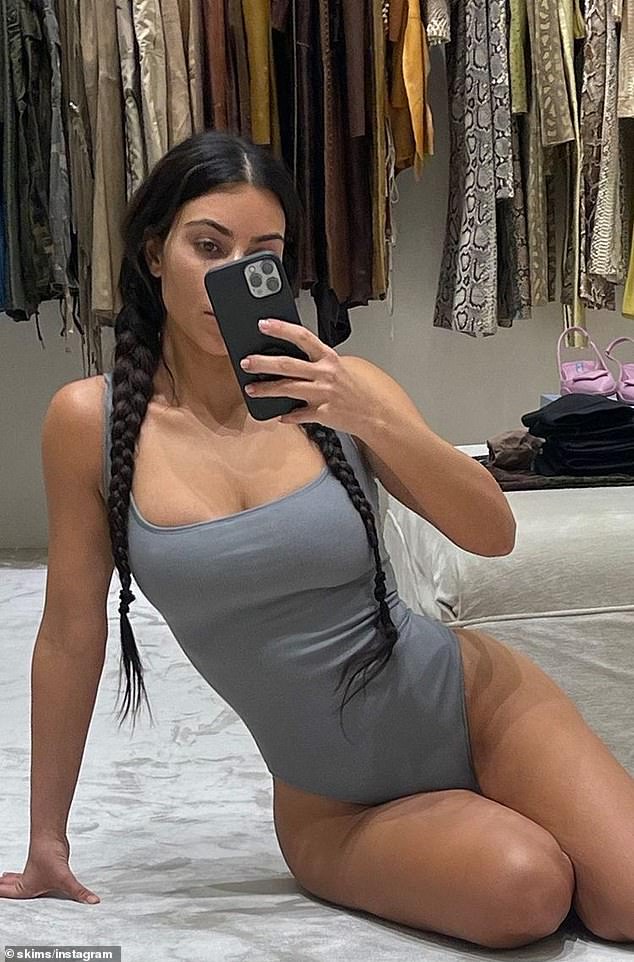 Ringless: Amid her divorce she has taken off her wedding ring but West has been spotted still wearing his

The KKW Beauty founder filed for divorce from the Runaway singer two weeks ago and they have begun dividing assets, with Kim reportedly slated to get their $60M Hidden Hills mansion.

She has foregone her wedding ring but West has not, as he was spotted this week wearing it in Calabasas.

It was said that Kanye was ‘not doing well’ amid the separation from his ‘dream girl’, but she felt the need to pull the trigger on divorce after they had not been in contact for months amid growingly ‘toxic’ interactions.

She had met with her divorce lawyer for the first time in July and nearly six months later began the process of legally fizzling their marriage, though no date of separation was listed on the documents. 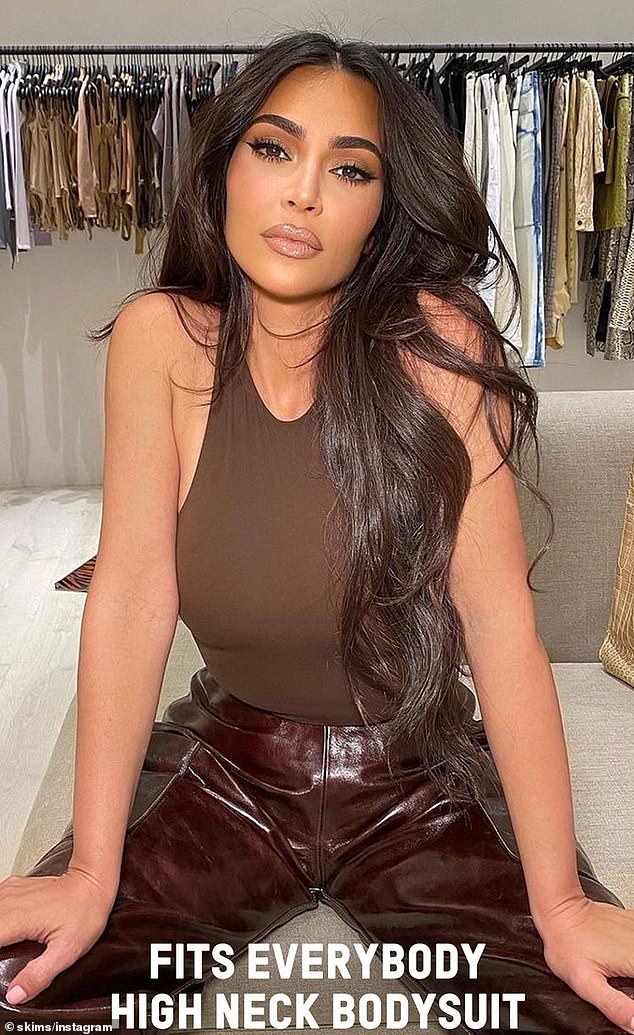 SKIMS: She continues to promote her SKIMS line with help from her famous sisters 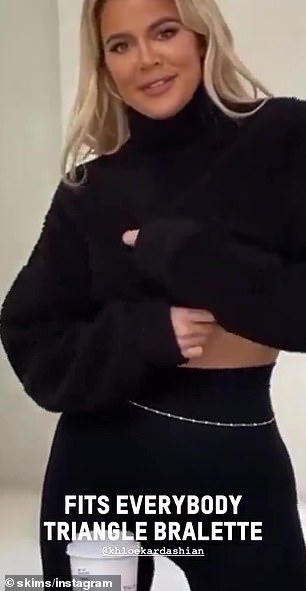 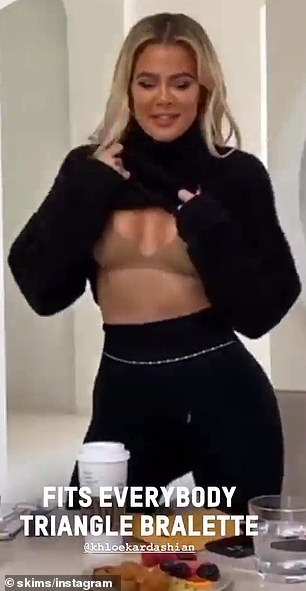 Peep show: Sister Khloe promoted her triangle bra as she flashed her abs 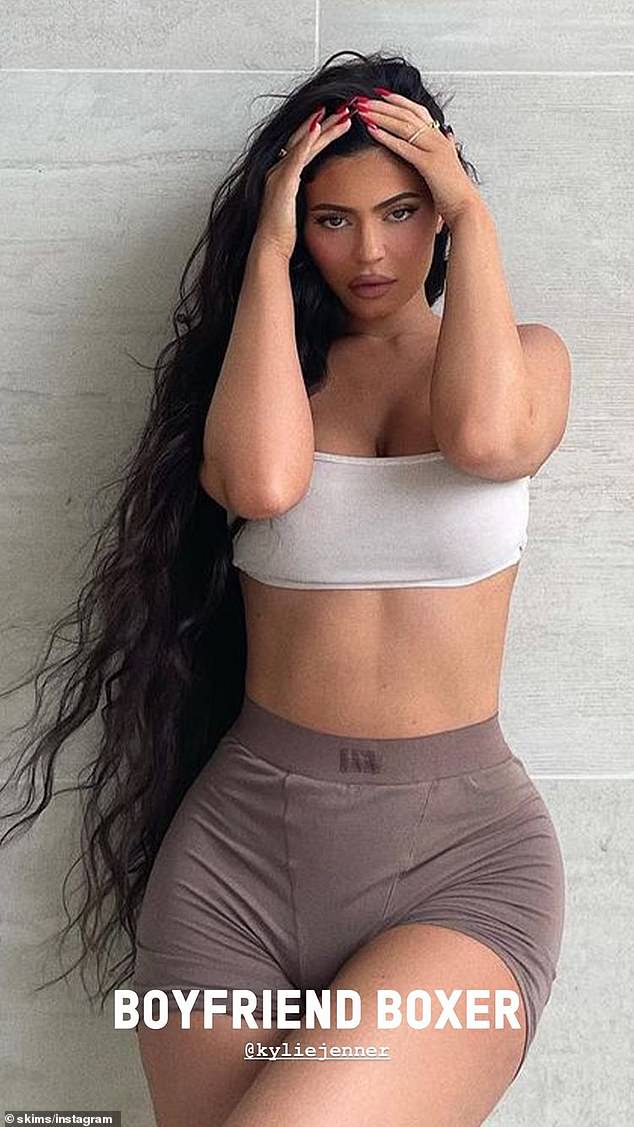 Comfort first: Her line of shapewear expanded into sweats and now a wide range of intimate sets

Famous curves: Kylie has the most similar body type to Kim as she flashed her desirable curves in a white set 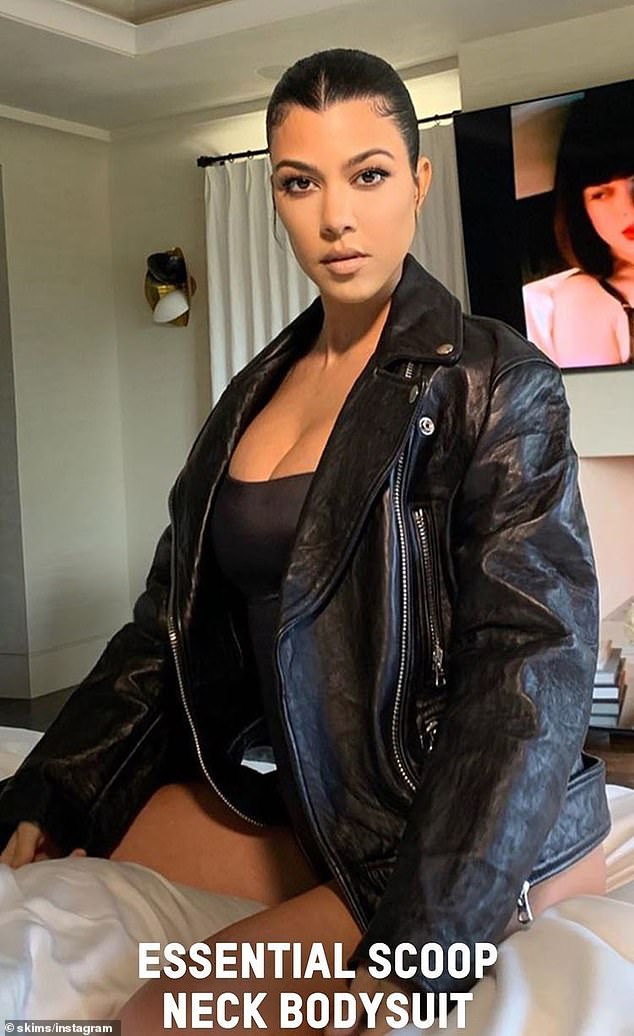 New romance: Though Kim’s marriage is on the rocks her longtime single sis Kourtney has begun dating Travis Barker 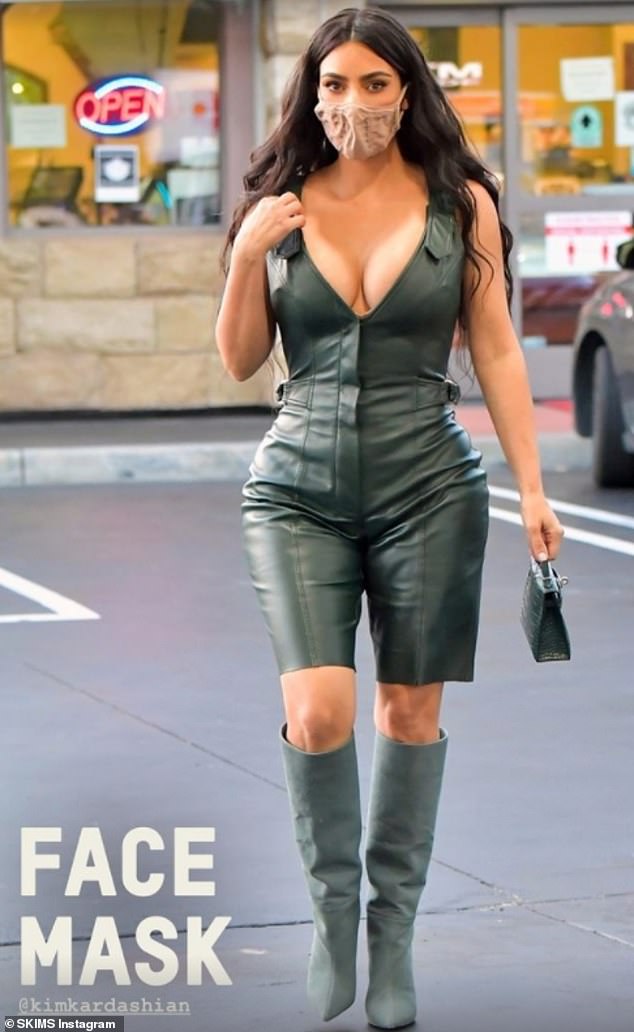 Adapting: Her shapewear line also includes a face mask collection as she expanded with COVID-19 in mind

A source told Us Weekly that she is taking things ‘day by day’ and that things have been going ‘as smoothly as possible’ with Kanye, her filing for joint legal and physical custody of their four kids.

The reality tv mogul has continued to focus on the continuation of her $760M empire that includes Skims, KKW Beauty, and her undying fame from Keeping Up With The Kardashians.

She has been leaning on the support of her famous family, spending the weekend in Palm Springs with her siblings and momager Kris Jenner immediately after filing.

One person who couldn’t wait to add fuel to the divorce fire was West’s rap rival Drake, who fueled affair rumors yesterday with his new track Wants and Needs.

‘I prolly should go link with Yeezy, I need me some Jesus. But soon as I started confessing my sins, he wouldn’t believe us,’ he raps on the track, harping back to 2018 speculation that the pair had a brief fling. 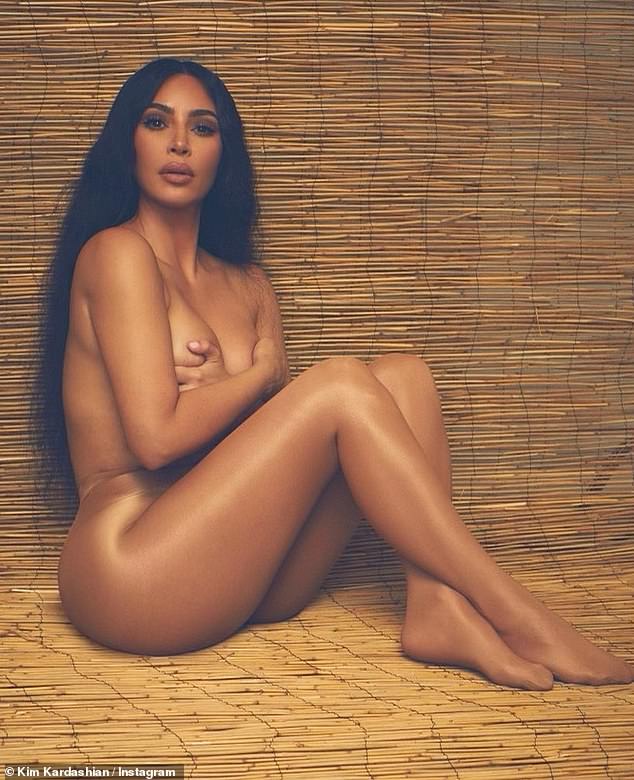 Stripped back: The reality tv mogul has continued to focus on the continuation of her $760M empire that includes Skims, KKW Beauty, and her undying fame from Keeping Up With The Kardashians