Kim Kardashian is being accused of ripping off Kylie Jenner

Kardashian fans are incredibly territorial — even when it comes to pitting two of them against each other.

This week, Kim Kardashian announced the upcoming release of her new Conceal, Bake & Brighten concealer kits under the KKQ Beauty label, which are set to go on sale March 23.

But while many of her fans — like the 2.7 million who liked a teaser photo she shared on Instagram — are thrilled, little sister Kylie Jenner’s fans are accusing 37-year-old Kim of ripping her off.

New stuff: Kim Kardashian announced this week that she is coming out with concealers 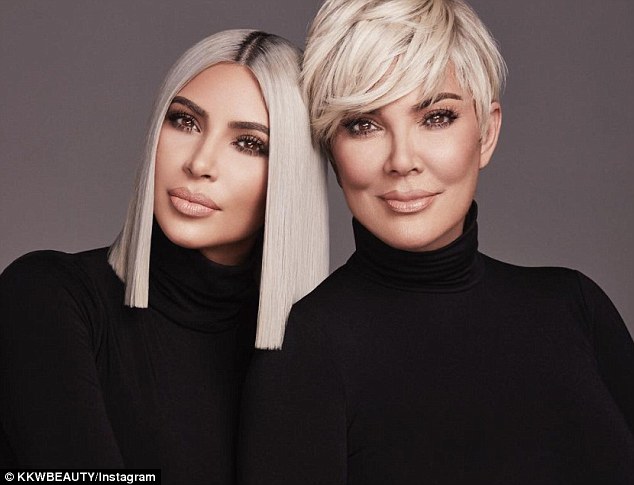 Showing them off: The 37-year-old modeled them with her mom on Instagram 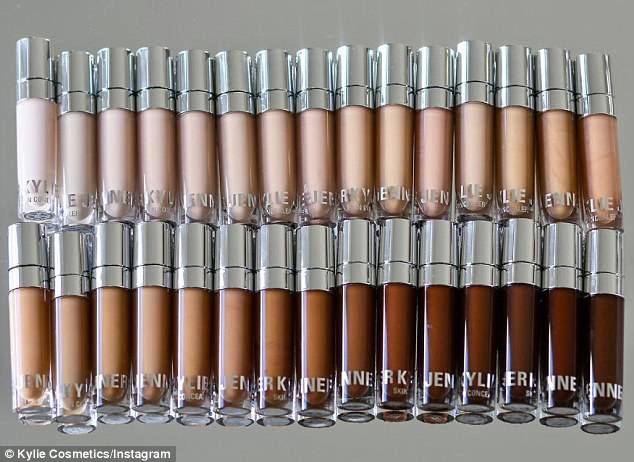 All the colors! Her younger sister, Kylie Jenner, also has a range of concealers (pictured) as part of her cosmetics line

Two fo a kind: Some superfans have accused Kim of ripping off Kylie

Kylie released her concealer range back in December. Like the rest of the products from Kylie Cosmetics, they were a hit.

Now, three months later, Kim is expanding her beauty empire with concealers of her own.

While many people might point out that the move makes sense — after all, there are only so many different kinds of cosmetics products — some of Kylie’s most loyal fans have insisted that Kim is just copying her little sister.

‘Why is Kim Kardashian bringing out concealer kits when Kylie’s already got concealers out?’ wrote one. ‘I don’t get it why copy your sister, surely there’s something different you can think to release?’

‘Not only is Kim trynna steal Kylie’s hustle she only dropping 16 concealer shades when her sister dropped 30 she’s about to get dragged,’ wrote another. 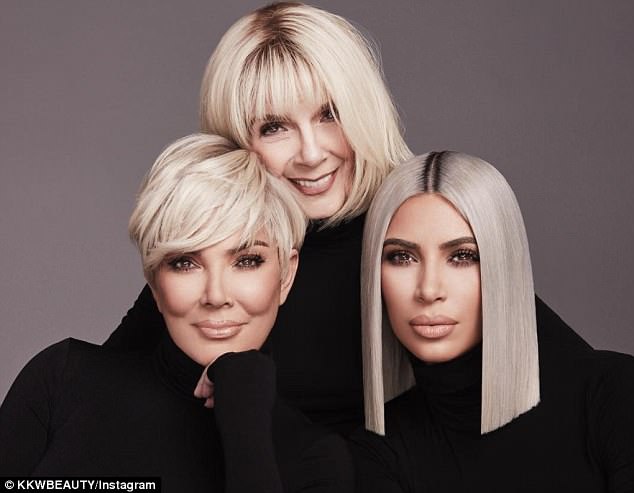 Next week: Kim announced that her concealers will come out March 23

Logic: However, Kylie’s fans have argued that since Kylie sells concealer, Kim shouldn’t

Fight? Some even think they are feuding, and the concealer is a sign

Some went to far as to speculate on a feud between the two, with one writing: ‘I feel like there’s a sister feud between kim and Kylie, now kim is about to sell concealer.’

Of course, when Kim launched KKW Beauty, it was in conjunction with Kylie Cosmetics. Her first products, liquid lipsticks, were under the KKW x Kylie Cosmetics banner.

But that hasn’t stopped her critics.

‘Kim K is the queen of petty. I know I’m not the only one who peeped her “new product” which is clearly concealer on Snapchat just a month after Kylie dropped hers,’ one tweeted back in January.

‘Kim’s about to come for Kylie in the concealer game,’ tweeted another, while one more wrote, ‘So KKW beauty is coming out with a line of concealers despite Kylie already having a line? C’mon competition! I wonder if Kim’s will be better. I read some not-so-good reviews about Kylie’s.’ 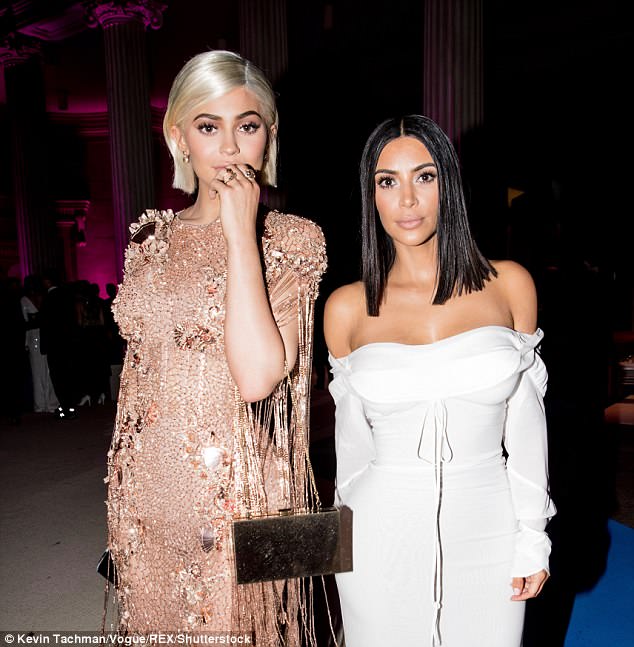 Together: Kim and Kylie have both been building their beauty empires, and all evidence points to them supporting each other 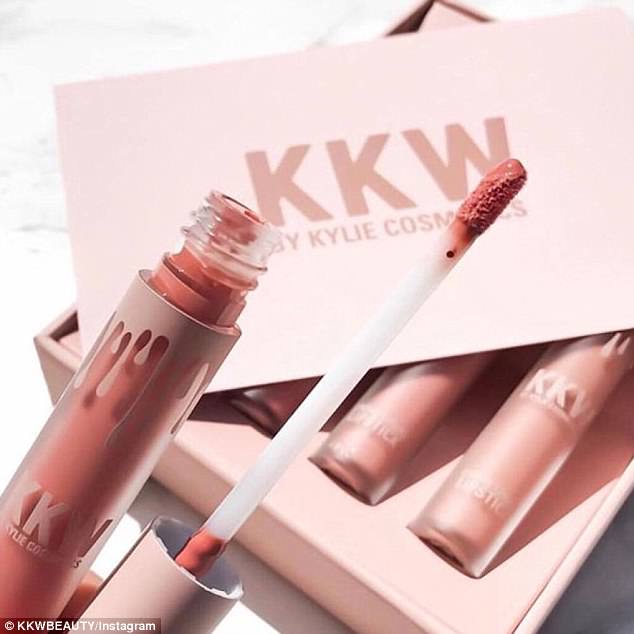 Contest: Some are wondering which of the two products will be better 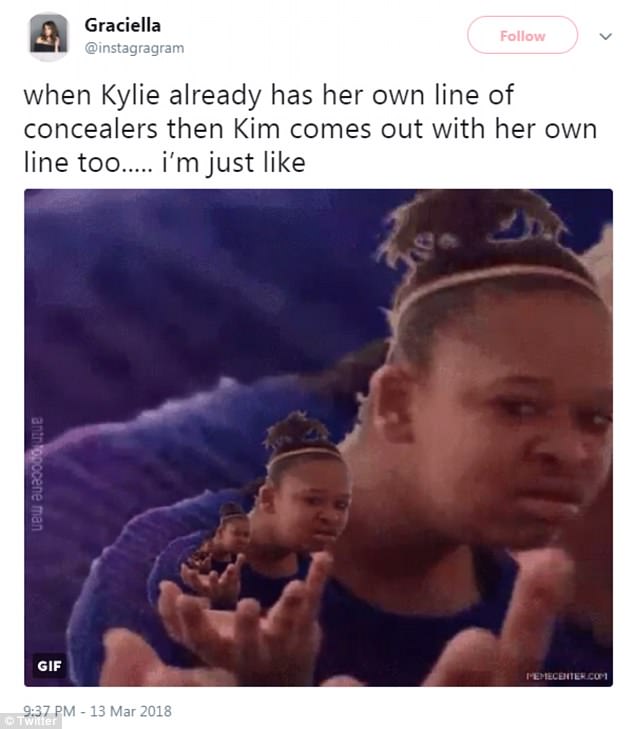 Back off: Some don’t think Kim should be selling concealer if Kylie is

In January, Daily Mail Online revealed that Kim had applied to trademark the name ‘Conceal, Bake & Brighten’ on January 5.

The applicant was Kimsaprincess Inc., which Kim incorporated in 2007; in the past, Kim has also been affiliated with Klass Act LLC, Dash Dolls LLC, Khaotic LLC, and Kklove LLC with Kris Humphries.

On January 8, she shared a photo of herself with her longtime make-up artist Mario Dedivanovic.  In the picture, Mario is seen drawing skin-colored lines under Kim’s eyes between her brows, and on her chin, which appears to have been the first look at her concealer. 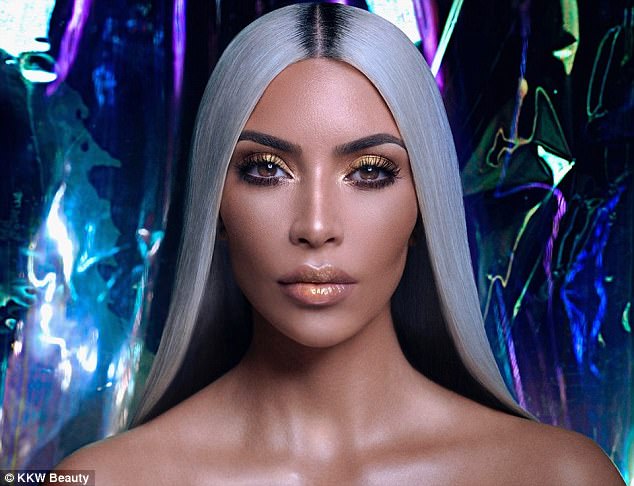 Up next! Kim began building her beauty empire after Kylie’s had found success 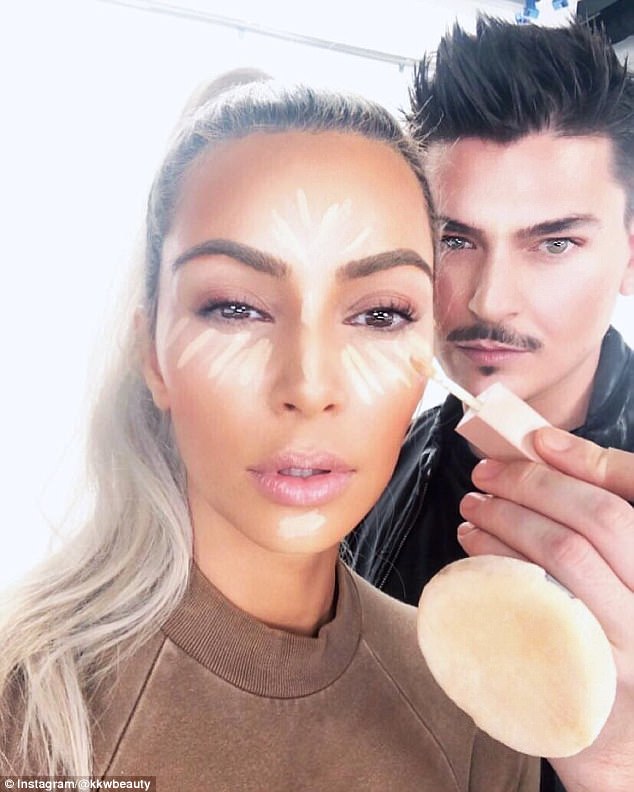 Hint hint? In January, she shared this photo with her longtime make-up artist, Mario Dedivanovic — in which he showed the first peak at the concealers

She also revealed around the time that she was working on a collaboration with Mario, though that seems to have been on a different project.

On January 16, she showed a set of dark swatches on her arm, captioning it: ‘Palette will come with super rich matte and shimmer shades.’

The caption read: ‘@kimkardashian and @makeupbymario give a sneak peek on what’s to come Spring 2018.’