Kim Kardashian looked stunning in a direct from the runway look as she posted more photos from her trip to Italy for Kourtney and Travis Barker’s wedding.

The 41-year-old influencer showed off her curves in a black head to toe unitard, boots, a red velvet corset and coat in a series of sexy shots on Instagram.

Her platinum hair was styled in an updo with tendrils surrounding her face.

La Dolce Vita: Kim Kardashian, 41, showed off her curves in a series of sexy shots Saturday on social media

The style maven was coy about her the location of the fashion shoot in her post, writing only ‘La Dolce Vita.’

She didn’t tag the designer, but she did share a photo of a model wearing the same outfit from what looked like a fashion show. 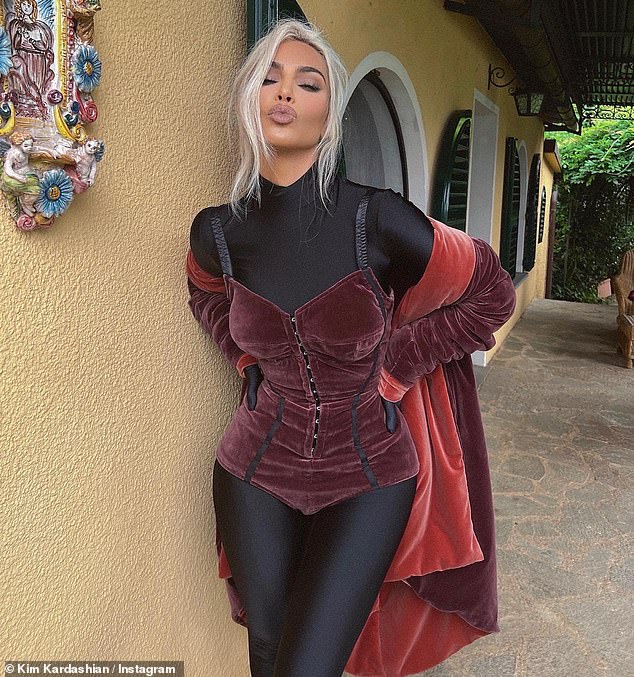 Kiss: The style maven blew a kiss to the camera as she posed in a black head to toe unitard and and boots, a red velvet corset and coat

The post garnered more than 200 thousand likes in the first 20 minutes after it was released.

The Kardashians star and her sister, Khloe, 37, returned via private jet from Italy earlier this week, after attending the wedding of their sister, Kourtney, 43, to rocker Travis Barker, 46 in an opulent ceremony in Portofino.

The lifestyle guru and her beau, former Saturday Night Live cast member Pete Davidson, 28, were spotted Friday on the set of a Skims shoot.

Who wore it better?: The reality star didn’t tag the designer, but she did share a photo of a model wearing the same outfit from what looked like a fashion show

The entrepreneur was recently signed to be the Chief Taste Consultant for plant-based meat brand Beyond Meat.

‘I’m so inspired by @beyondmeat’s mission,’ she explained, ‘and excited to share their delicious plant-based products with all of you as their Chief Taste Consultant.’

However fans who criticized her after it appeared she didn’t eat any of the products in the 30 second ad shared on social media. 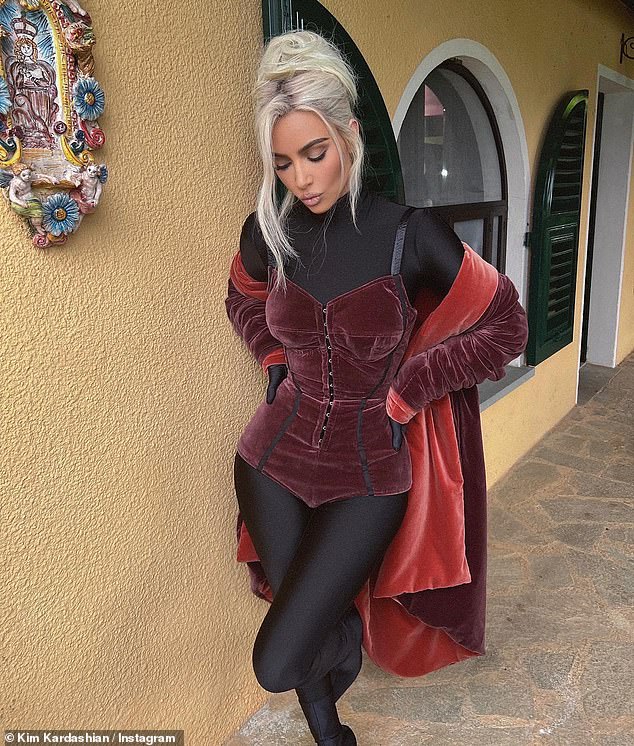 Coy: The platinum haired beauty was coy about the location of her photo shoot. She recently returned from her sister Kourtney’s, 43 wedding to Travis Barker, 46 in Italy