KOBE Bryant posted a moving tribute to his wife Vanessa just weeks before the tragic helicopter crash in which he died alongside his daughter.

The basketball star, 41, called Vanessa Laine, 37, his ‘Queen’ and their daughters ‘princesses’  in the touching post on Instagram to mark 20 years since they first met when she was at high school.

He wrote: ‘On this day 20 years ago I met my best friend, my Queen @vanessabryant I decided to take her on a date to Disneyland tonight to celebrate old school style (pre 4princesses).

‘I love you my mamacita per sempre.’ 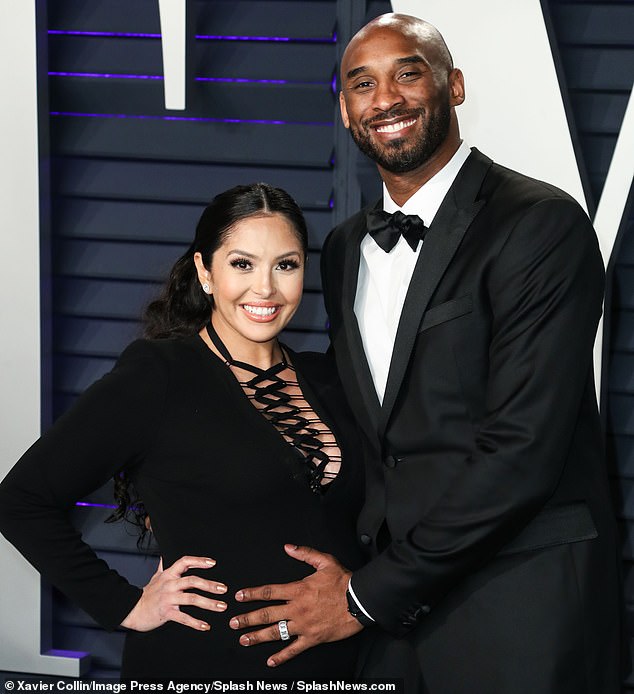 Kobe met Vanessa in 1999 when she 17 and was working as a background model on a music video and they got engaged six months later and they got married in 2001.

The couple had four daughters together – Natalia, 17, Gianna, Bianka, four, and seven-month-old baby Capri Bryant who was born on June 20 last year.

Kobe adored his family and in a previous post after he retired in 2016 he wrote: ‘I’m so excited to see what God has in store for us as a family now that one chapter is closing and new ones are opening.’

Kobe was 21 and had played three seasons in the NBA.

There was a huge media frenzy around their relationship in the early days with a television helicopter once flying over Vanessa’s high school campus trying to picture them together. 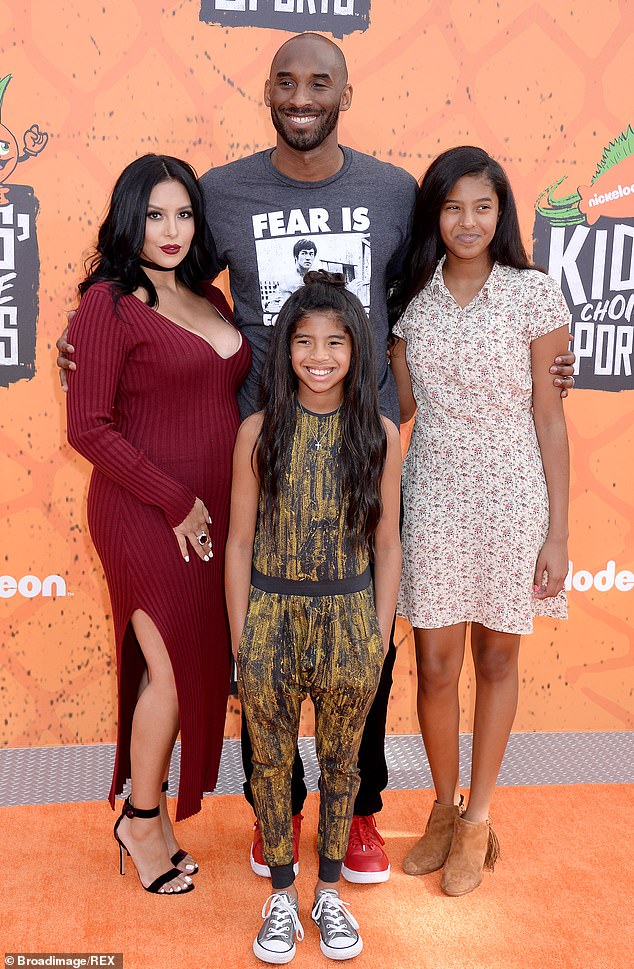 The couple are pictured here with their eldest two daughter, Natalia (right) and Gianna (front) at the 2016 Nickelodeon’s Kids’ Choice Sports Awards in Los Angeles 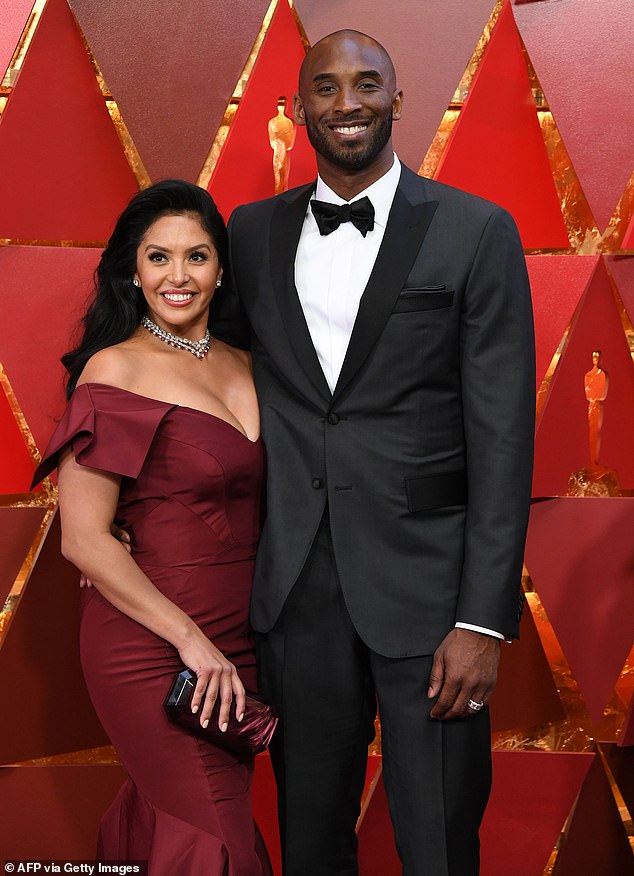 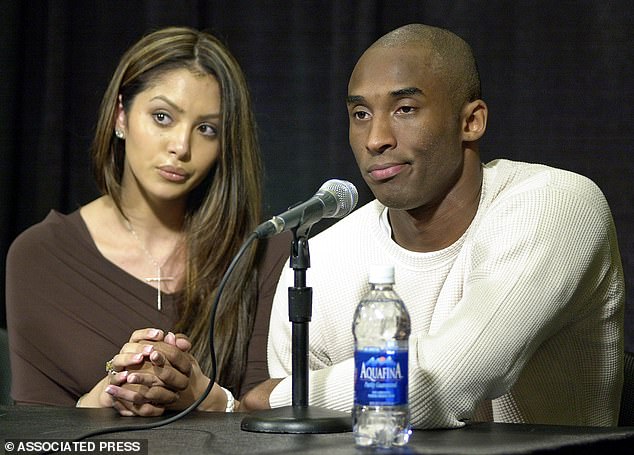 The couple’s marriage hit the rocks in 2003 when Kobe was accused of rape. He admitted cheating on his wife at a press conference (pictured) and claimed it was consensual. The charges were later dropped

The intense attention over their relationship forced her to miss her high school prom.

Kobe’s family is said to have refused to attend their low-key wedding because they were reportedly concerned that he was too young to wed and were worried there was no pre-nup agreement.

In 2003, the year their daughter Natalia was born, Kobe was arrested on suspicion of sexually assaulting a 19-year-old in a hotel in Colorado. Rape charges were later dropped after he claimed it was consensual and Vanessa appeared alongside him at a press conference where he admitted cheating on her.

The tearful star told his wife: ‘You’re my backbone. You’re a blessing. You’re a piece of my heart. You’re the air I breathe.’ 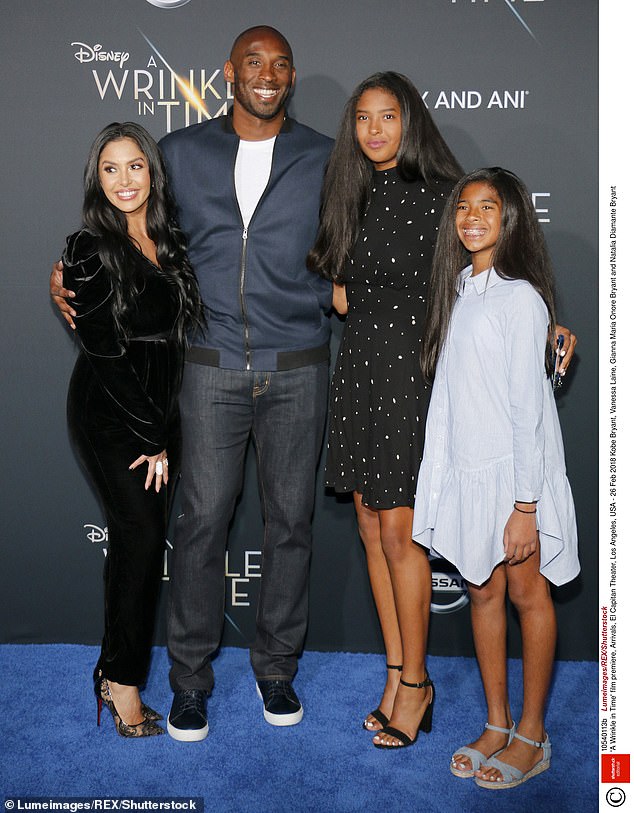 The accuser later dropped all charges.

The couple faced heartache in 2005 when Vanessa suffered a miscarriage due to an ectopic pregnancy. He later blamed himself for the stress he had put her through.

Speaking in the Showtime documentary, Kobe Bryant’s Muse he said: ‘We should be building our family. But because of my mistake, because of this tough year, we lost a baby.’

The couple had their second daughter Gianna in 2006.

But in 2011 their relationship was on the rocks again and Vanessa filed for divorce citing ‘irreconcilable differences’ and was set to get half of Kobe’s $150million fortune in the settlement.

But two years later they said the divorce was off and in 2016 they had their third daughter Bianca.

Kobe and Gianna, a keen basketball player herself, had been on their way to the Mamba Academy for basketball practice when the chopper crashed at around 10am.

The seven other people on board were also killed.

The pilot – named locally as Ara Zobayan – was trying to turn the aircraft when it smashed into hills of Las Virgenes Canyon, which is home to celebrities including the Kardashians.