‘I might ask him what not to do if she makes the final’: Coach Nigel Sears jokes about help from son-in-law Andy Murray after helping Anett Kontaveit reach last eight at Australian Open

Four years on from his terrifying collapse on the Rod Laver Arena Nigel Sears will be back in the Australian Open for a big match.

The veteran British coach, who happens to be Andy Murray’s father-in-law, will be in the coaching seat for Estonian Anett Kontaveit’s quarter-final against Wimbledon champion Simona Halep.

On a dramatic night Sears was stretchered away and treated for a suspected heart attack while his son-in-law was playing next door on the Margaret Court Arena. It turned out to be a severe bout of food poisoning caused by eating Sushi.

He has not given up his favourite food, even though it did cause him to be hospitalised for several days.

‘Actually I do still eat sushi. I think I was very unlucky, because they make great sushi here; it’s just that I had it every day for 10 days,’ smiled Sears. ‘I remember, (fellow British coach) Andy Bettles was watching Andy’s match with me and I said I really don’t feel very good, I think I ate something. And he said, ‘Ten days in a row, you’re bound to get a dodgy one.’ ‘I’m hoping that’s not going to happen again. Ana was a set and 2-1 up when it happened. We don’t need that scenario.’

To this day he has not watched a repeat of the match or the incident, which was understandably worrying for his family back home, with daughter Kim heavily pregnant at the time.

Sears has spoken several times to Murray, who is back in England trying to recover from the pelvic bruising that is the latest disruption to his career. 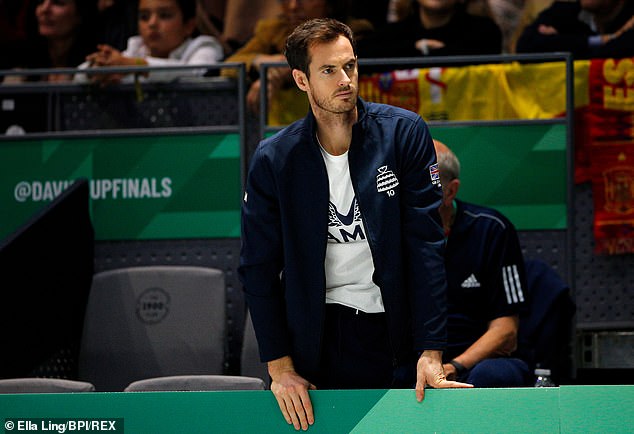 ‘I might ask him, tell us exactly what not to do if she makes final,’ joked Sears in reference to Murray’s five runners up finishes at the Australian Open.

More seriously, he advises his son-in-law not to rush back: ‘I’m sure he’s OK in himself, but I’m sure it must have been tough for him not be out here this year.

‘He knows his body better than anybody by now, and he’s being as thorough as he possibly can be. He’s put an awful lot of work into his rehab, as you know. He’s still continuing to work very hard. I’d just love to see him back. If he can be, I’m sure he will be – when he knows that time is right.

‘It’s not a nothing surgery. He now really needs to make sure that he doesn’t come back to early.’