Korean War Army vet, 88, saves 10-year-old girl next door who was being attacked by family pit bull by hitting the dog with a 3-foot toy lawn soldier

An 88-year-old Army veteran was hailed a hero for saving a 10-year-old girl from a pit bull attack on Sunday.

Leonard Miller, a medic in the Korean War, was at his Perry Township, Ohio, home when he heard screaming emanating from next door.

A frantic 13-year-old neighbor then knocked on his door, saying her younger sister was being attacked by their dog.

‘I’m thinking what am I gonna get to defend myself with. I had forgotten my baseball bat, and so I went up there and got one of them nutcrackers [soldiers] and I grabbed it,’ Miller told Fox8.

Korean War veteran, Leonard Miller, 88, saved a young neighbor from an attack by their family pit bull. He whacked a plastic lawn soldier on the dog’s back several times to free its jaws

He used the 3-foot toy as a weapon, hitting the dog with it several times until the pet loosened its grip and the girl was able to flee.

‘It had her and was just shaking her and growling, and I hit the dog, I don’t know how many times, but it didn’t faze that dog, didn’t faze it,’ Miller told 19News.

Miller called the police and for an ambulance. When paramedics arrived they told Miller he had saved the girl. 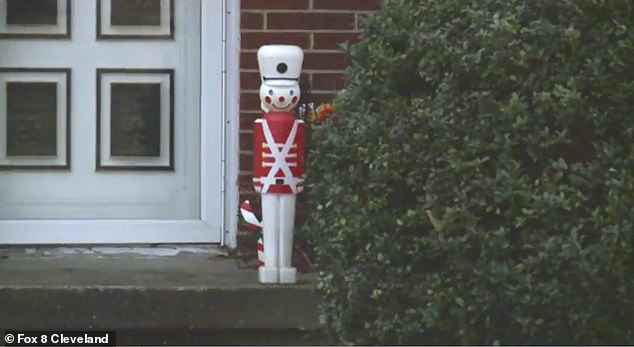 A neighbor rescued a 10-year-old girl from their pet pit bull by hitting it using a toy soldier. The dog was surrendered by the family and euthanized

After getting the dog off the girl, the sisters ran outside leaving Miller alone with the animal. Concerned that he would be bitten next, he started screaming ‘No!’ several times to distract the pit bull.

‘I don’t know, the dog just seemed to think that I was in command or something because he didn’t try to charge me,’ Miller told Fox8.

He said the girl already had one surgery, with a second one Tuesday, but he was told that she will keep the arm.

‘One of the medics said that’s the worse they had ever seen, an injury from a dog,’ Miller said to Fox8.

The family voluntarily surrendered the pit bull to the Stark County Dog Warden Monday, and it was euthanized.