Kris Jenner shocked The Kardashians viewers during Thursday’s season two premiere as she admitted she forgot about one of the properties she owns.

The 66-year-old businesswoman – who has a reported net worth of $170 million – was seen giving fans a look inside her Beverly Hills condo before she admitted that she only uses the place for wrapping Christmas gifts and storing Champagne.

She was joined by her daughter Khloe Kardashian, 38, on the trip, who mocked her mother for being so rich that she couldn’t remember her property portfolio.

Wealthy: Kris Jenner shocked The Kardashians viewers during Thursday’s season two premiere as she admitted she forgot about one of the properties she owns

Speaking to Khloe, Kris admitted: ‘This is a cute little place if I must say so myself,’ going on to confess that she uses the pad as her Christmas ‘gift wrapping station’ and ‘Santa’s workshop.’

Khloe then remarked: ‘I can’t wait to be wealthy enough I forget I have properties somewhere’, adding in a mock British accent, ‘Oh, I have a condo in Beverly Hills! I forgot about that!’

Kris later explained in a confessional that she had bought the property to have a base close to  her mother Mary Jo ‘MJ’ Campbell, and cousin Cici Bussey, who live in the area.

‘I kind of forgot it was there,’ Kris laughed. ‘That sounds ridiculous, doesn’t it?’ 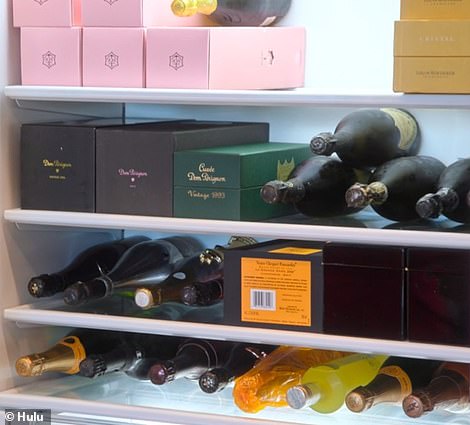 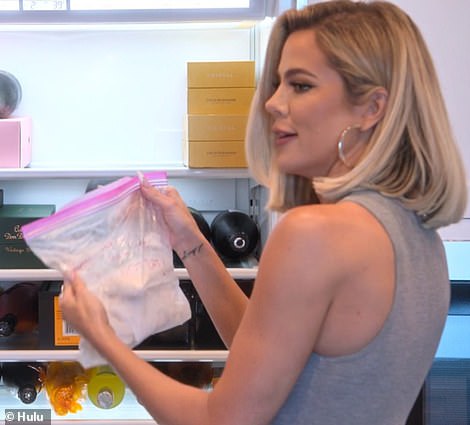 Pour it up: The 66-year-old businesswoman – who has a reported net worth of $170 million – was seen giving fans a look inside her Beverly Hills condo before she admitted that she only uses the place for wrapping gifts and storing Champagne 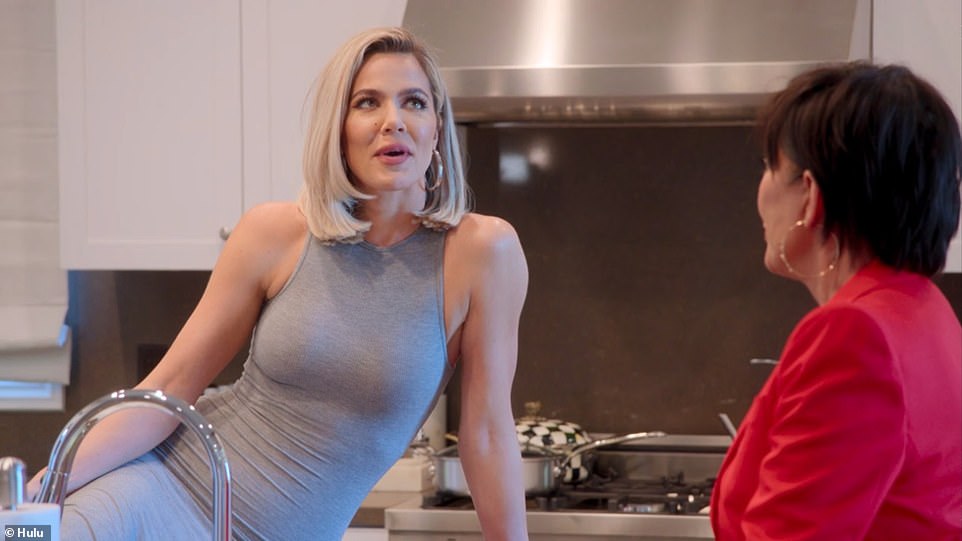 Unbelievable: Kris was joined by her daughter Khloe Kardashian, 38, on the trip, who mocked her mother for being so rich that she couldn’t remember her property portfolio 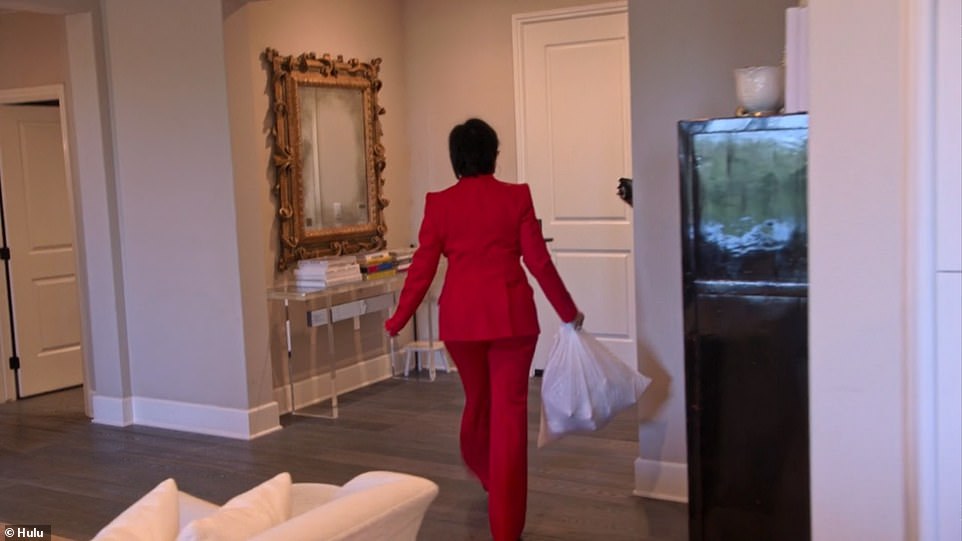 Spacious: Kris gave viewers a glimpse inside her luxury condo as she was seen clearing out the fridge

Kris and Khloe were then seen peeking inside the fridge, which was largely empty with the exception of several bottles of champagne.

‘In case of emergency, Kris quipped, while Khloe looked on in wonder.

With the average sale price for condos in Beverly Hills currently $1.5 million, viewers were left in shock at Kris’ statement as they rushed to Twitter to comment.

They tweeted: ‘I forgot I had a condo…that sounds ridiculous, doesn’t it?’ Yes, Kris. That does sound ridiculous.’; ‘Kris Jenner forgetting she had a condo in Bev Hills is amazing I can’t even hate on #Kardashians it’s so ridiculous that it’s good 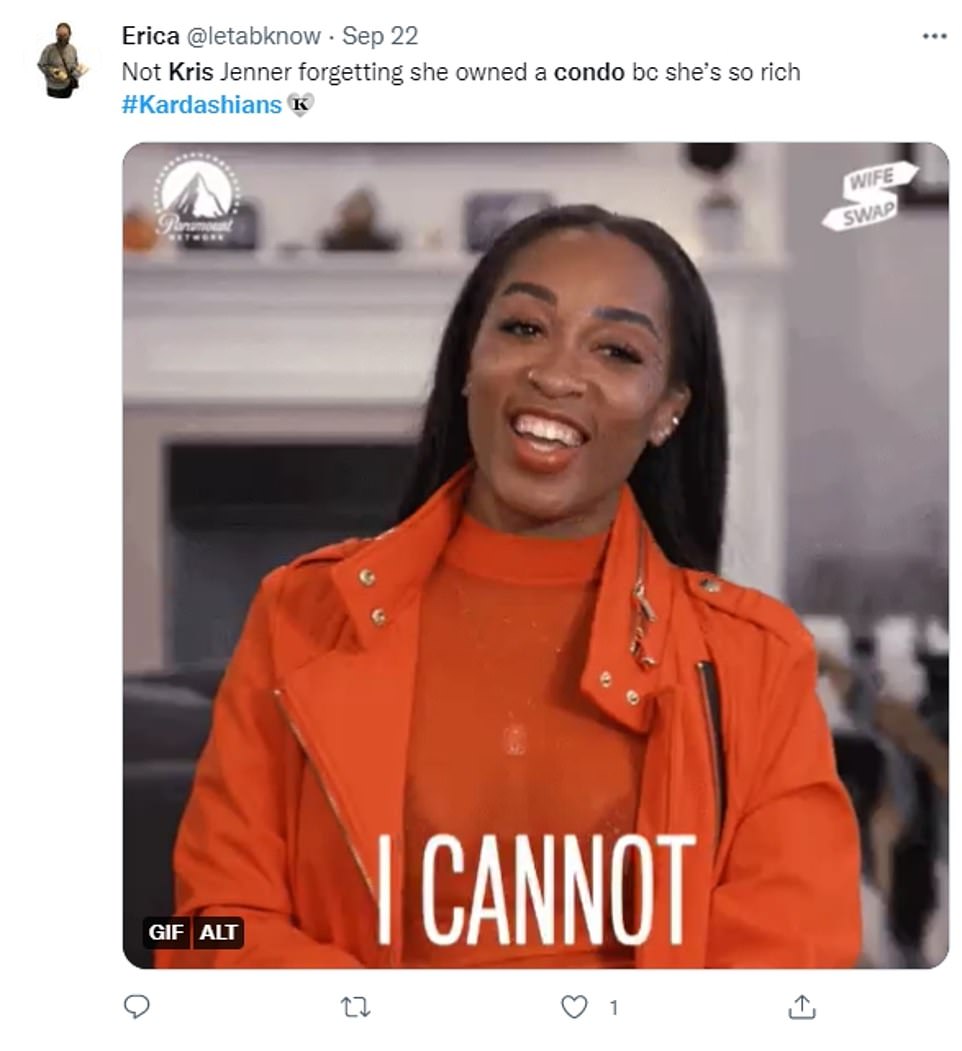 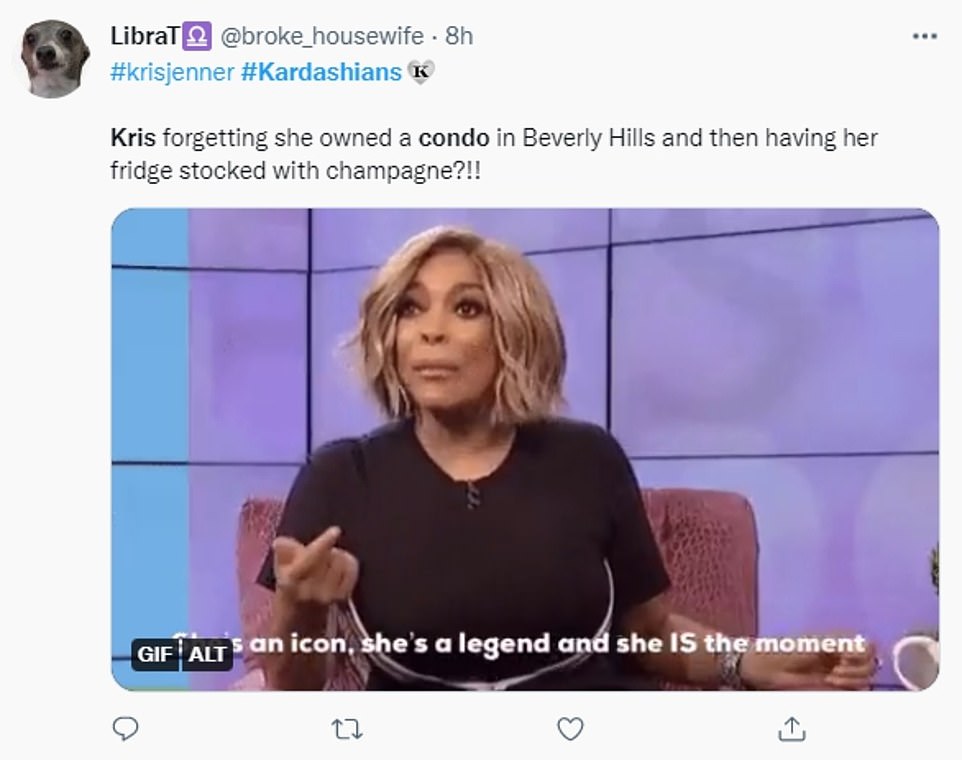 ‘kris forgot she had a whole condo in beverly hills? wow money does make you happy because this level of wealth? #Kardashians’; ‘WTH, Kris Jenner, said on the Kardashians last night that she had a BEVERLY HILLS condo that she forgot about. Wow, and called it their Christmas wrapped station. Must be nice. #Kardashians 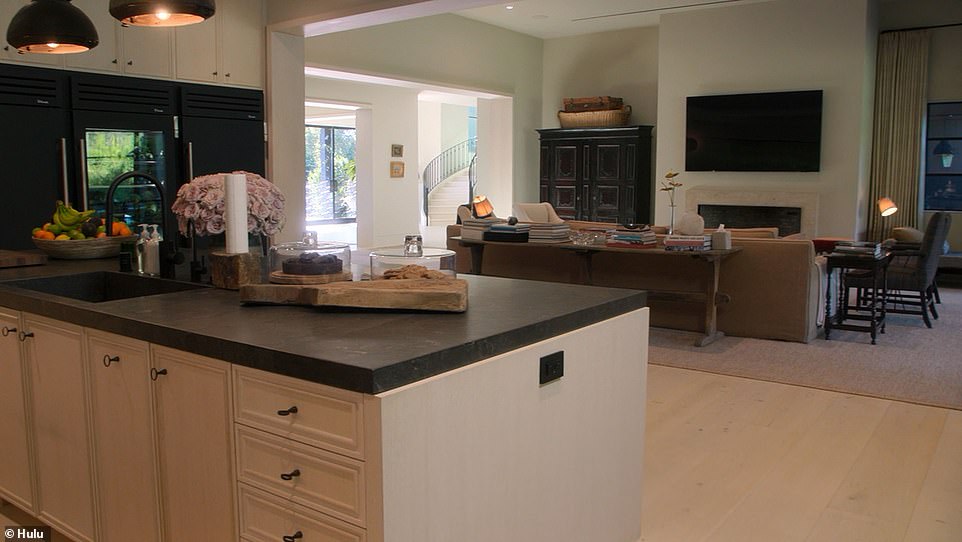 Take a peek: Last year, Kris moved into a $20million Hidden Hill mansion next door to her daughter Khloe’s home and unveiled her new property in a housewarming / 66th birthday party 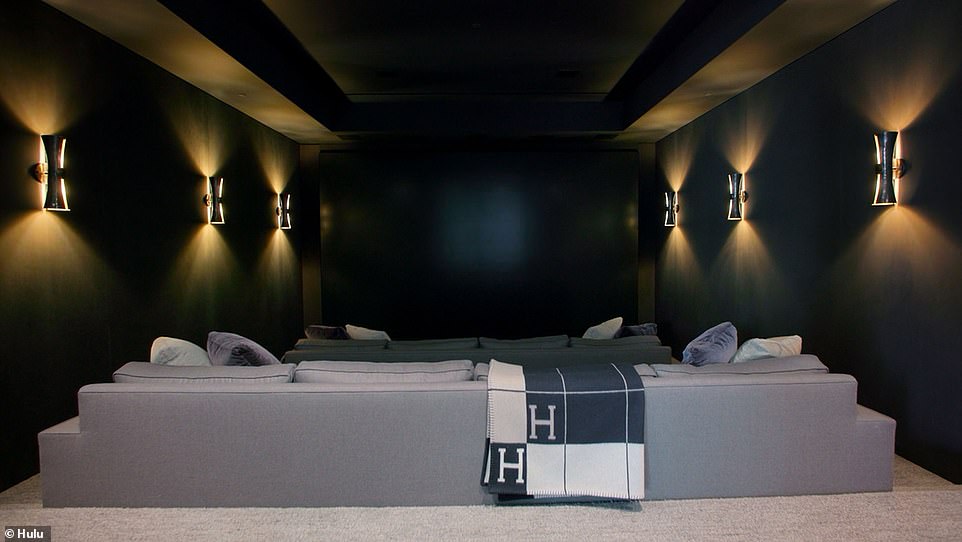 Last year, Kris moved into a $20million Hidden Hill mansion next door to her daughter Khloe’s home and unveiled her new property in a housewarming / 66th birthday party.

Kris threw open to the doors to her new mansion in season one of The Kardashians for her party, with daughters Kim Kardashian, Khloe and Kourtney Kardashian were all present, along with some of her closest friends like Ellen DeGeneres and Faye Resnick.

After guests were seen arriving at her house for the party, Kris said in confession that she gave herself her best birthday present – her new house.

‘I can’t wait to see everyone tonight and have a wonderful time,’ Kris added in confession. 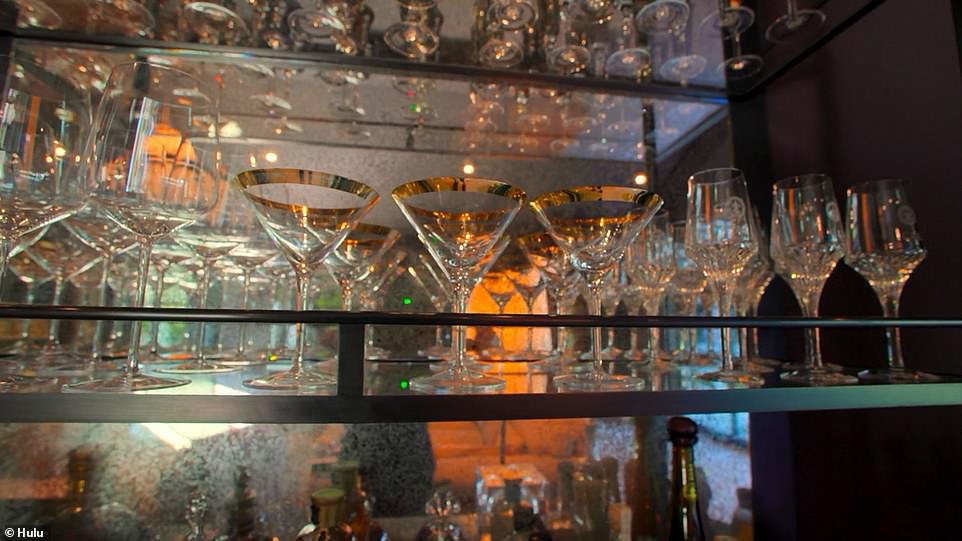 Drinks ready: Kris had so many glasses for drinks for her guests 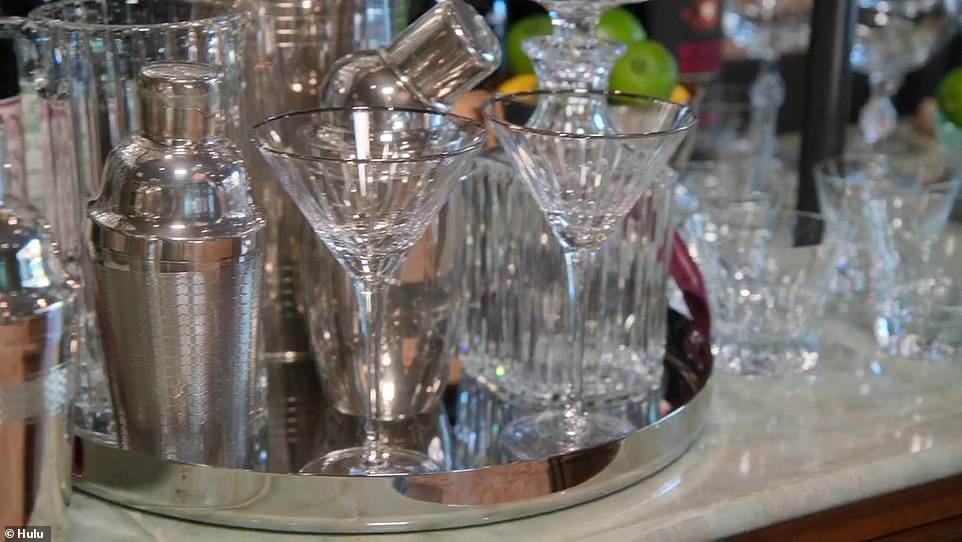 Bar: Kris shows them the screening room, piano room and bar, with Kourtney adding that she, ‘loves that every room is infused with her personality

Kourtney saidin confession, ‘My mom’s house is beautiful. I know it’s everything she’s dreamed of,’ as she told her and Travis, ‘It’s a real Tiffany lamp, that I got myself for my birthday.’

Kris showed them the screening room, piano room and bar, with Kourtney adding that she, ‘loves that every room is infused with her personality.

She also showed them the gym, while giving her close friend Faye Resnick a glimpse at an entire room for the designer dinnerware sets that she collects. 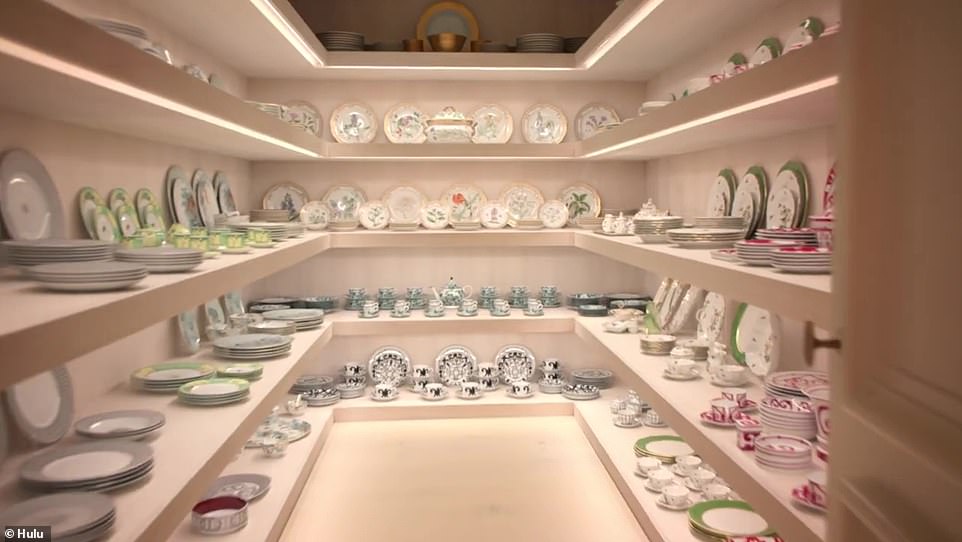 Entire room: She also shows them the gym, while giving her close friend Faye Resnick a glimpse at an entire room for the designer dinnerware sets that she collects 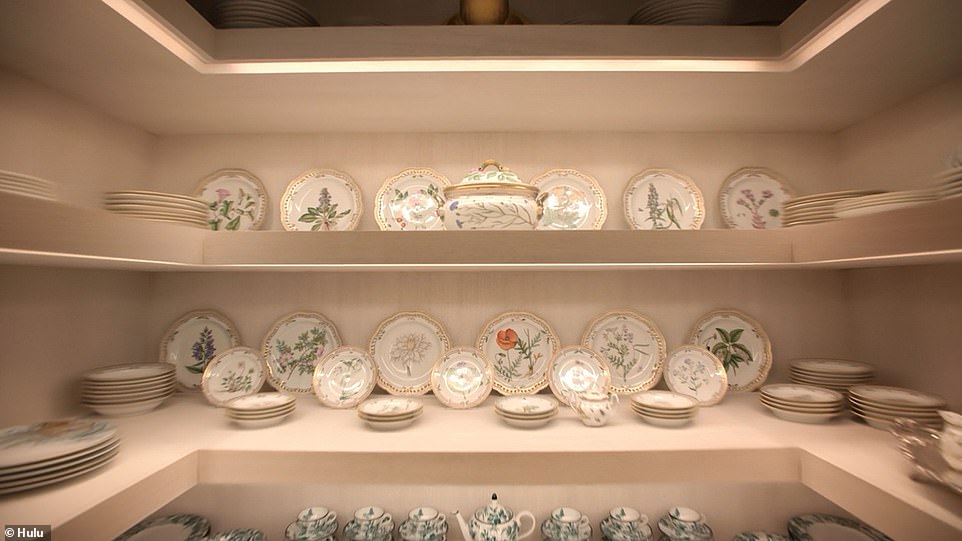 Close up: Kris had a variety of fine china in the room, including floral emblazoned ones 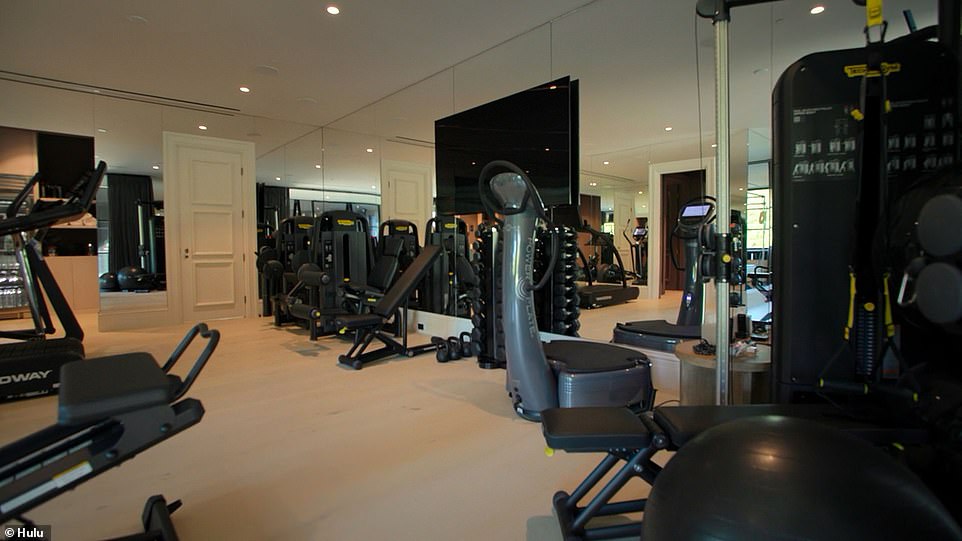 Fitness: Kris’ at home gym featured mirrors everywhere and a large TV with a number of machines

Khloe went on to point out some of the amazing features of the house, like, ‘the table, the ruffles, the little martini table,’ adding in confession, ‘Living in Kris Jenner world is just absolute fabulousness.’

‘Like being surrounded by absolute opulence and a dirty martini in a crystal glass covered in diamonds… and fabulous s**t everywhere,’ Khloe added in confession.

She went on to remark it was like, ‘sensory overload’ to be in the home, which also includes color-coded fridges for various foods. 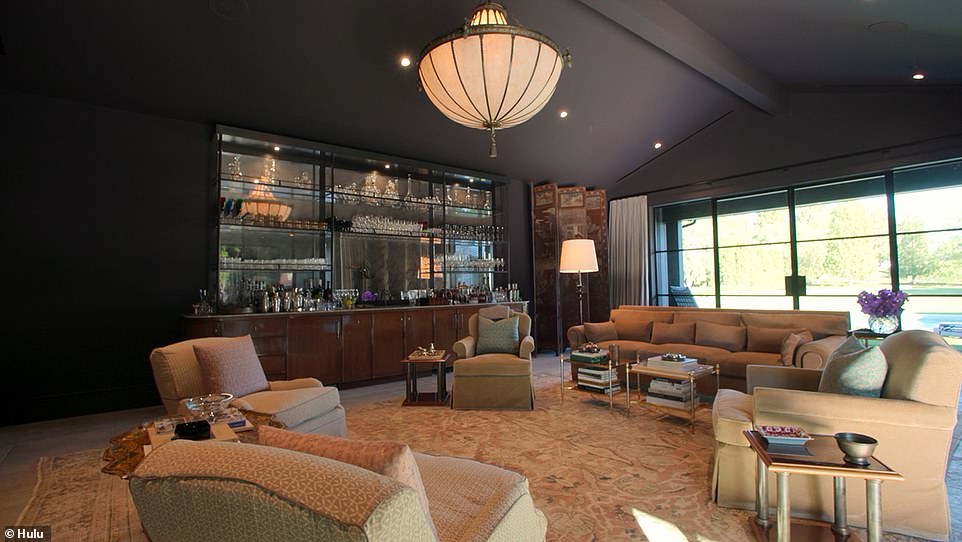 Living room: A glimpse at one of the living rooms in Kris Jenner’s new home 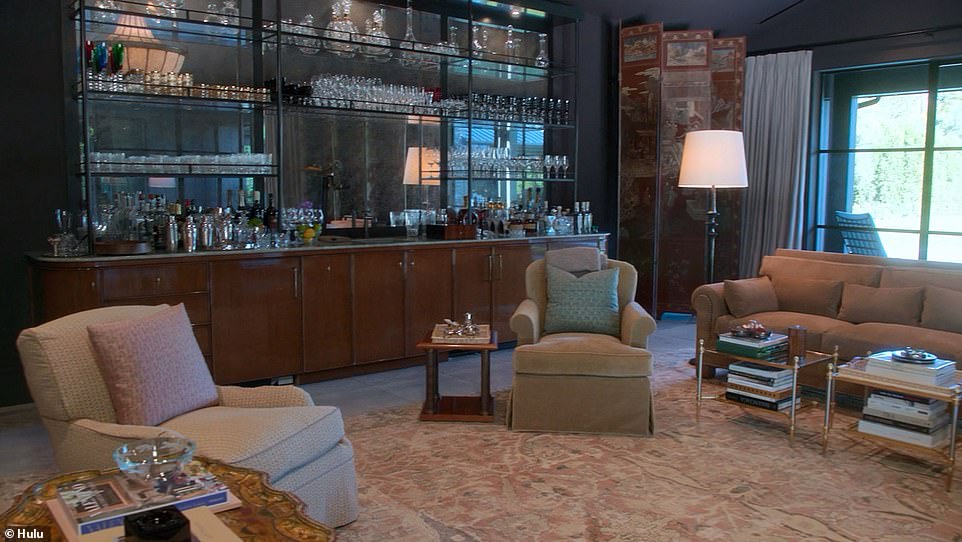 Bar: A closer look at the bar in Kris Jenner’s new Calabasas home 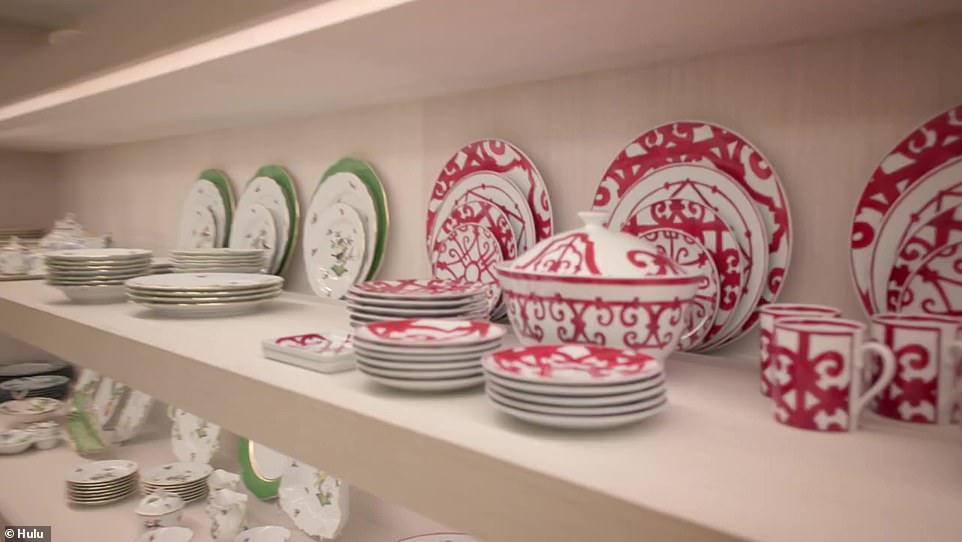 Kendall was in Miami during the birthday bash, but she came back back home to visit her mother later, with her dog in tow.

‘I feel bad cause I missed my mom’s birthday and I didn’t get to see her brand new house, which I was really excited about because one of my secret passions in life is interior design and architecture,’ Kendall said in confession.

‘She killed it, she really did,’ Kendall added, with Kris telling her she’s been working so much and she still doesn’t know where everything is.

Khloe and Kris built their homes next to each other in the Kardashian/Jenner favorite neighborhood of Hidden Hills. 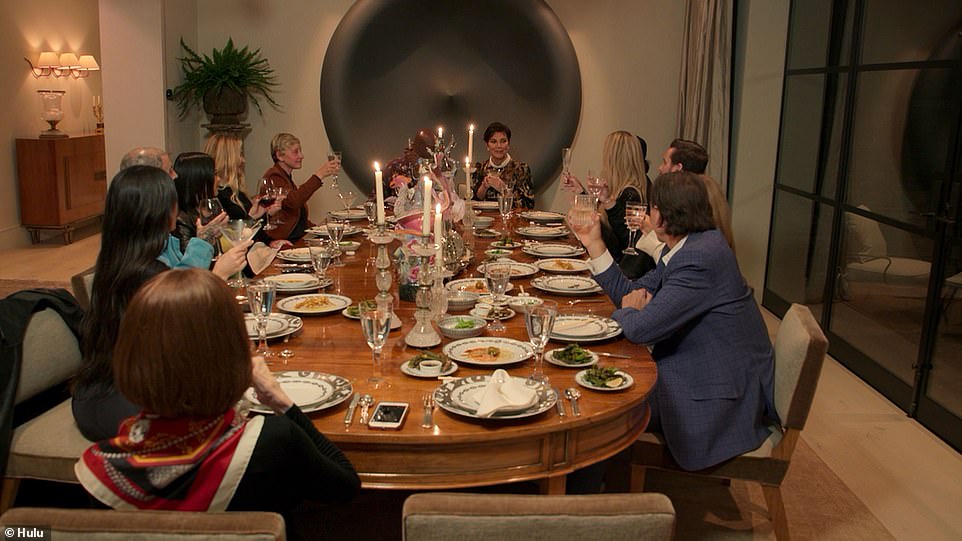 Cheers to her new home: Kris gathers everyone to start with appetizers, adding in confession, ‘My favorite thing in the world is to be with my family. As time goes by, I realize I really want to spend more time with my kids whenever I can’ 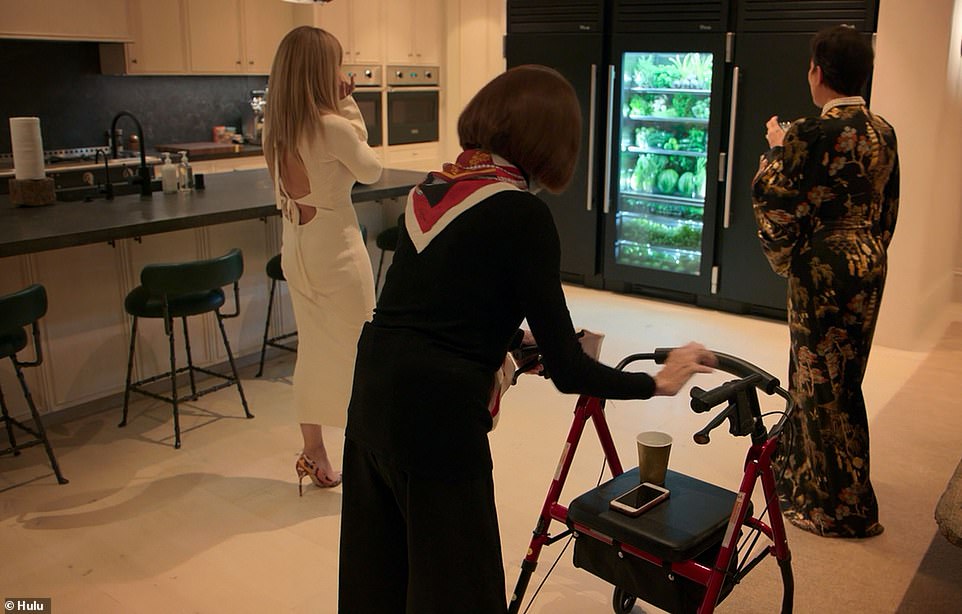 Immaculate: Kris was giving a tour to her guests, including her mom Mary Jo Campbell, 87 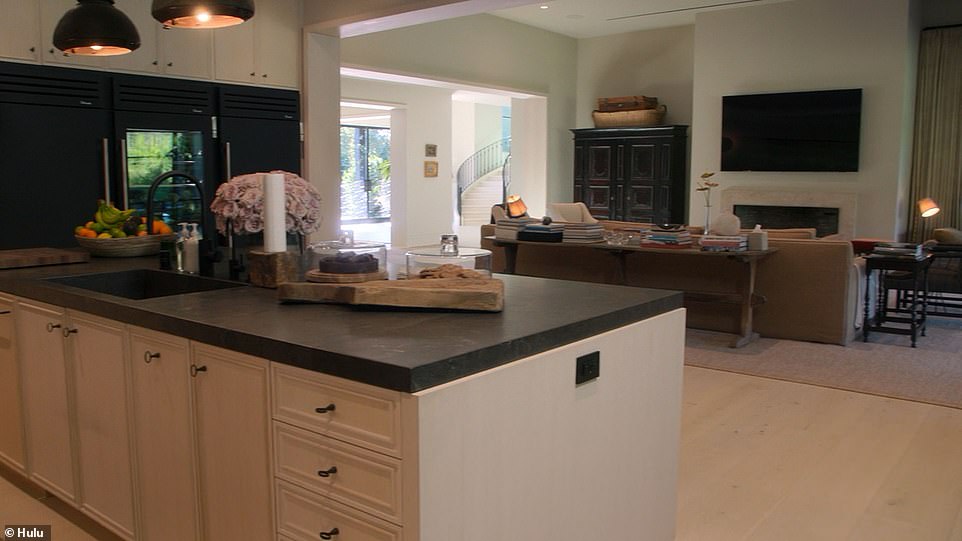 They had purchased the lots on the same day from Metro Development Homes just before Christmas to build their custom home of their dreams.

As reported by The Dirt last year, the brokers originally proposed one single family home on the 3.4 acre property, but Kris and Khloe counter-proposed two homes on the then-single lot.

Originally the land was owned by construction magnate Ron Tutor – the father of Million Dollar Listing star Tracy Tutor – and included a home of 20,000 square feet.

The home was once leased to Britney Spears. It sold in 2012 for $7 million to a local developer who razed the house. After that, the land was left vacant for years before being passed to Metro Development. 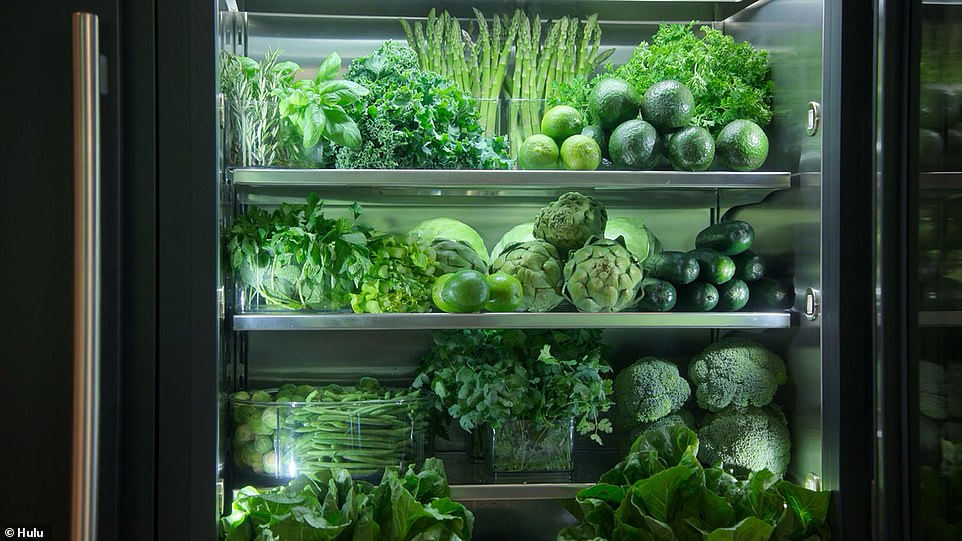 Color-coded: Khloe adds its like, ‘sensory overload’ to be in the home, which also includes color-coded fridges for various foods. 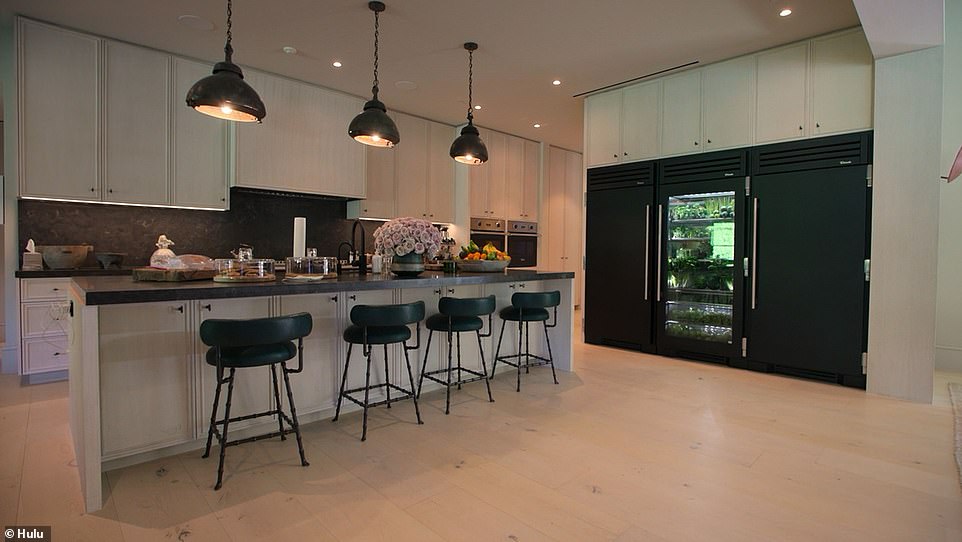 Kitchen island: A glimpse at Kris’ elegant kitchen with a dining island 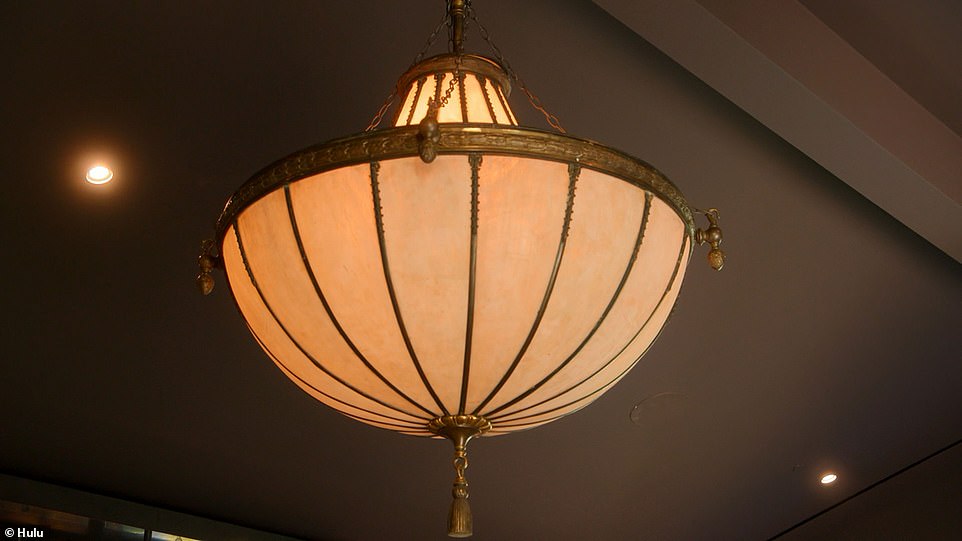 Details: The light fixtures were stunning as well

Despite the exorbitant amount, the real estate purchases aren’t the most expensive Hidden Hills prices on record as a property sold for $22.3 million in June 2019.

The Dirt noted that the Kardashian-Jenner purchases still rank high among the priciest ever sold in the entire valley. 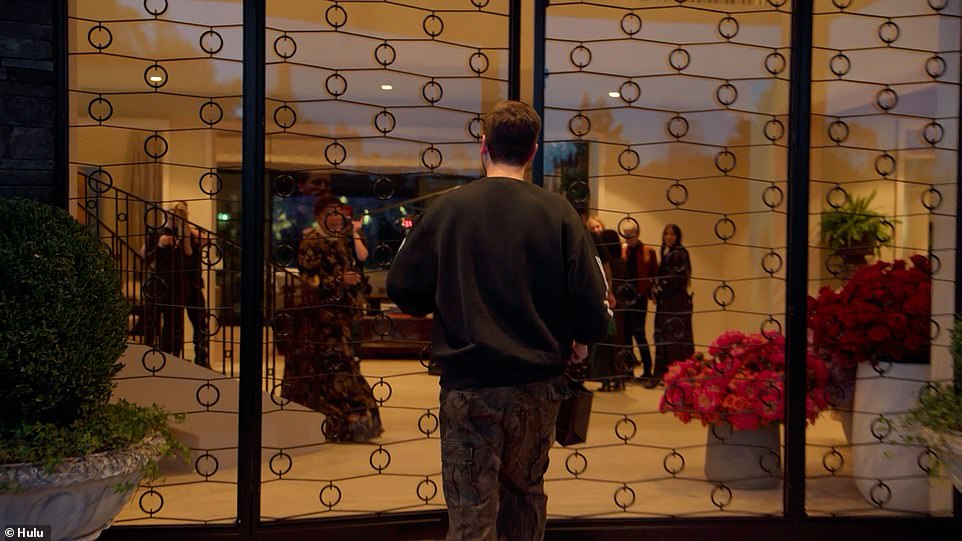 Wow! Kris’ home had incredible doors, as seen in the most recent episode the Kardashians 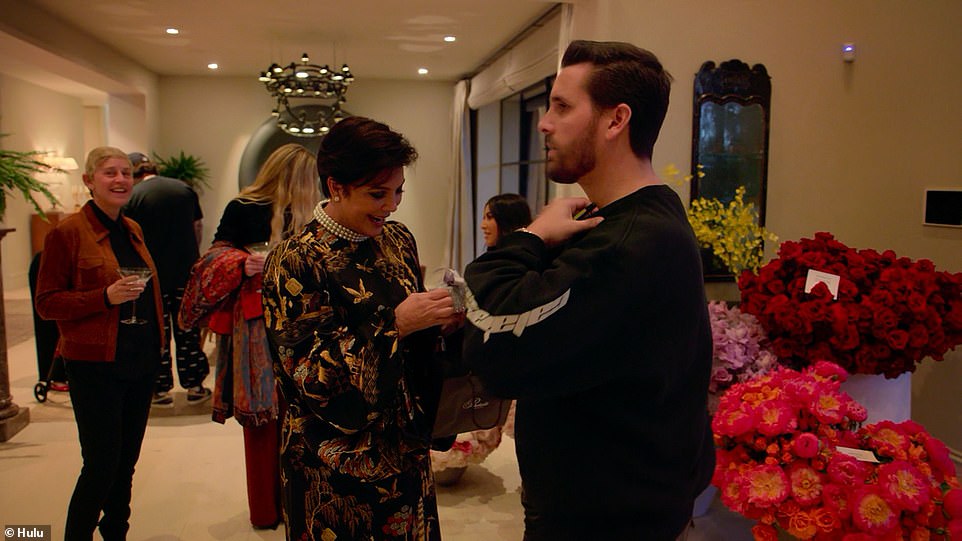 Home: Kris’ foyer had a plethora of fresh flowers with recess lighting 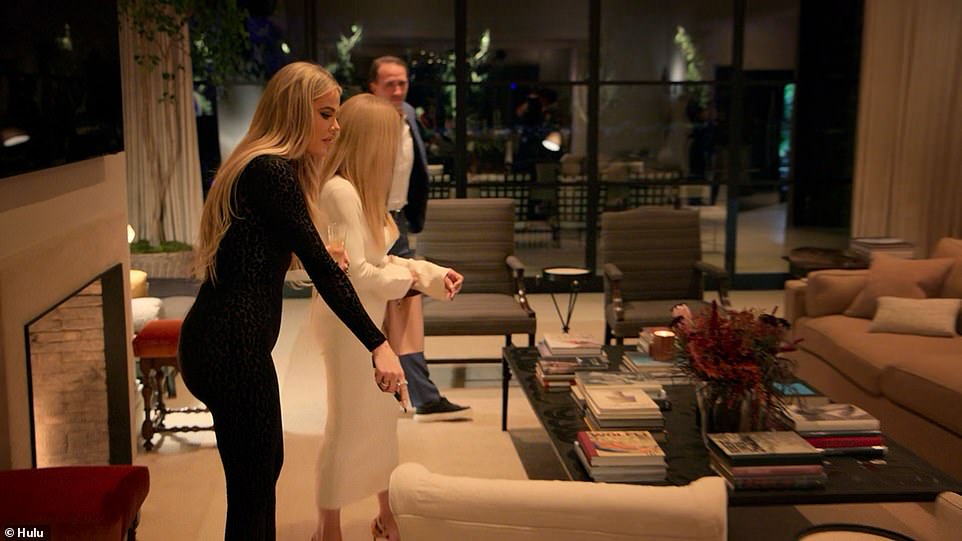 All the goods: Khloe couldn’t take how immaculate everything was at Kris’ home

Khloe’s home was reported to be 10,000 square feet, with an oversized pool and like Kris, a modern farmhouse architectural style, per Variety.

Kris and Khloe’s homes are just a stones throw away from Kim Kardashian’s, who lives in a $60 million mansion. She purchased ex husband Kanye West’s portion of the home for $23 million earlier this year, which included all the furnishings, finishings and art inside.

Kylie Jenner bought her Holmby Hills home for $36.5 million in summer 2020, while Kourtney Kardashian lives in Calabasas in a home she bought in 2014 for $8.5 million. 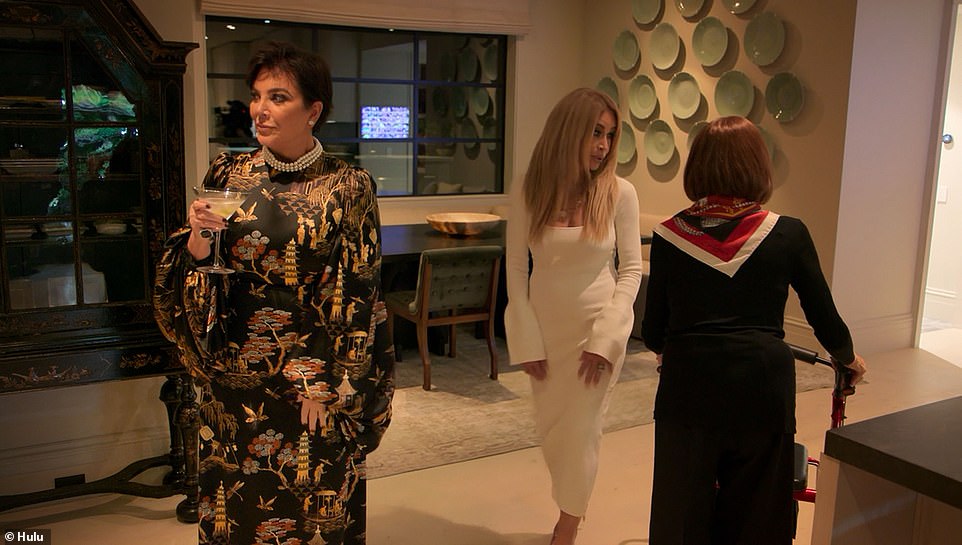 Art: One wall featured teal plates hung up in an interesting pattern 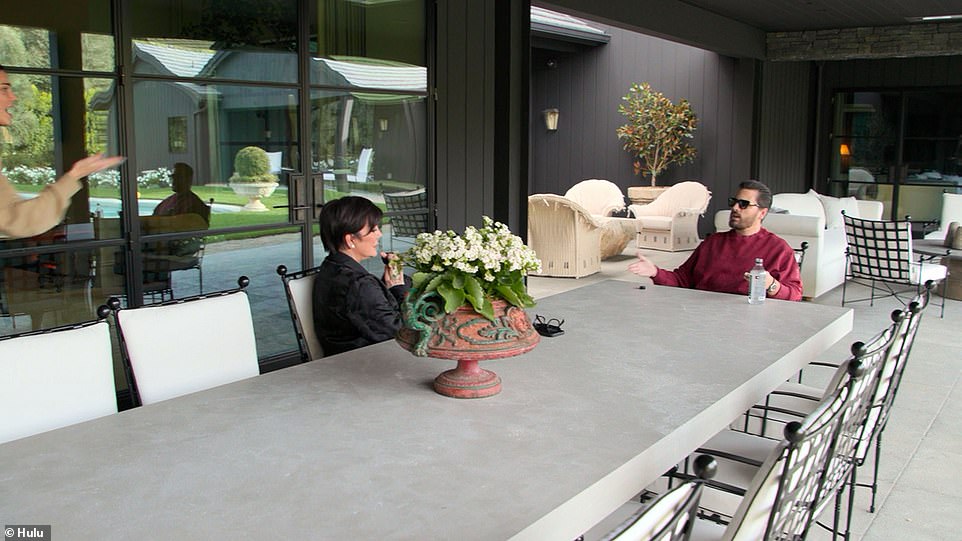 Incredible: Kris’ backyard had a large table as well as different couches throughout for casual seating