Kylie Jenner spent the day with family at the happiest place on Earth earlier on Thursday.

The TV personality, 25, shared a series of Instagram stories and adorable snaps of memorable moments taken during the trip.

The businesswoman brought along her daughter, Stormi, 4, whom she shares with singer, Travis Scott. She also had a blast with her beloved nieces, four-year-old Chicago West, Dream Kardashian, 5, and True Thompson, 4.

Girls day! Kylie Jenner, 25, was seen with her daughter, Stormi, along with Chicago West, True Thompson, and Dream Kardashian for a day trip to Disneyland

The beauty shared videos onto her Instagram story to give a glimpse of her girls day out at Disneyland to her 367 million followers.

The short clips showed the reality star holding hands with her daughter and nieces as they walked around the busy adventure park with orchestral Disney music playing in the background.

Another cute video showed the large group enjoying one of the popular attractions at the happiest place on earth.

Kylie kept her look casual for the day, opting to stay cool and comfortable while walking under the hot sun. 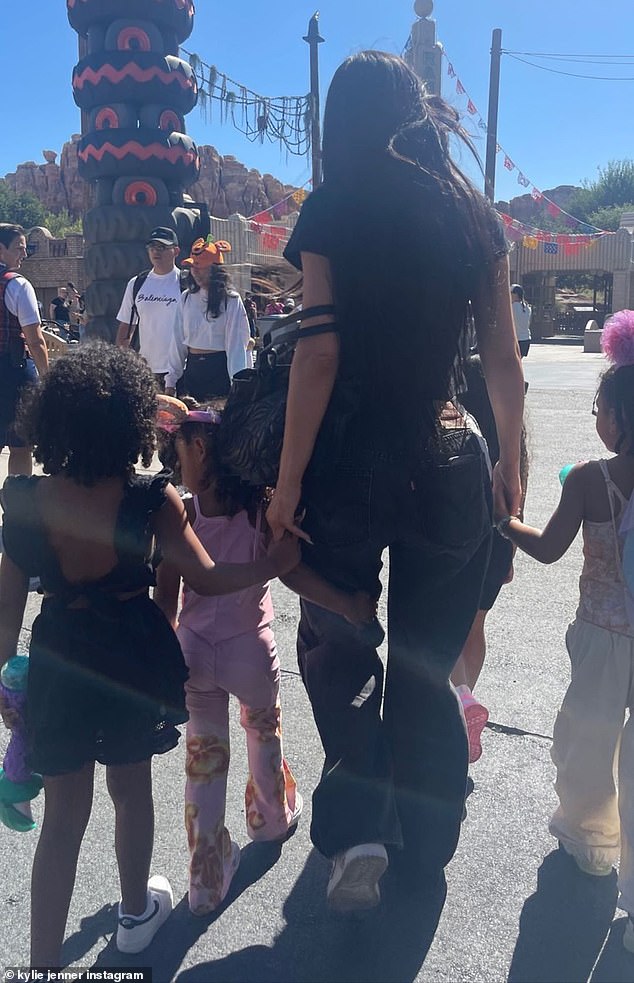 Excited: In the short videos, Kylie’s daughter and nieces appeared to be more than thrilled to be at the happiest place on earth

Taking in the sights: A clip showed the reality star leading the way around the crowd as they headed to a ride

The Kylie Cosmetics founder wore a pair of loose-fitting, dark gray jeans along with a black, short-sleeved cropped top.

She slipped into a pair of white sneakers as she led the way through the large theme park.

Her brunette hair fell down straight past her shoulders, while a pair of sunglasses were balanced on top of her long locks.

The talented beauty appeared to be having fun as she went on rides and spent time with her family.

Enjoying the rides: Kylie was seen having a blast on one of the popular Disney rides with her daughter and nieces 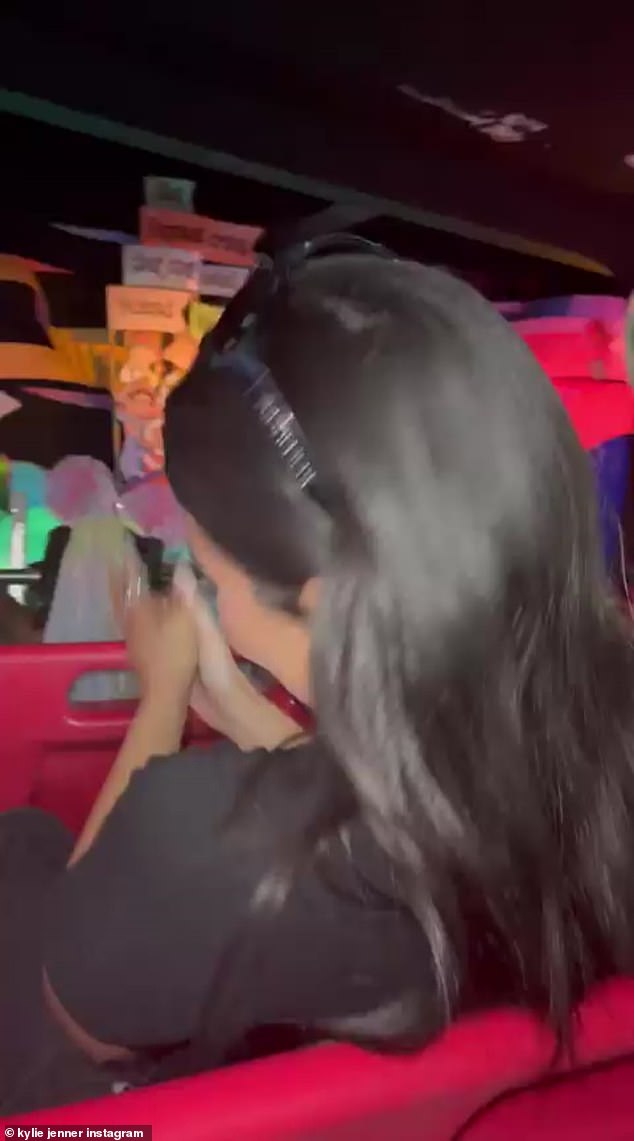 Magical day: The businesswoman appeared to be enjoying a day off of work to spend time at Disneyland

Kylie is no stranger to the happiest place on earth, and was pictured earlier in April with her daughter, Stormi, and Travis Scott at the theme park.

The two also share a son who was welcomed to world earlier this year in February, and have yet to reveal the official name.

The stars had originally named their son, Wolf, but revealed soon after that they have chosen a different name.

The TV personality further opened up about the name change during an appearance on The Late Late Show With James Cordon.

‘We haven’t officially legally changed the name. His name is still Wolf. His passport’s Wolf, but that isn’t gonna be his name. We’re just waiting,’ she explained. 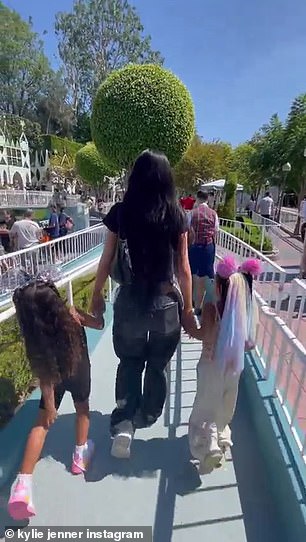 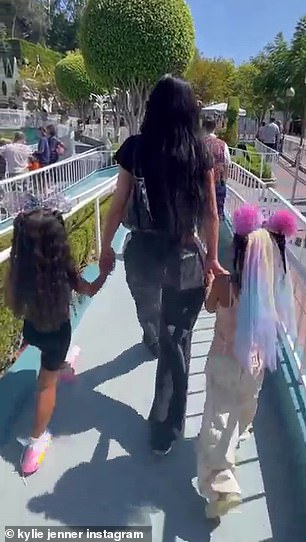 Proud mother: In an interview with People, Kylie stated, ‘Stormi is my legacy. I’m raising her to be smart and kind and driven’ 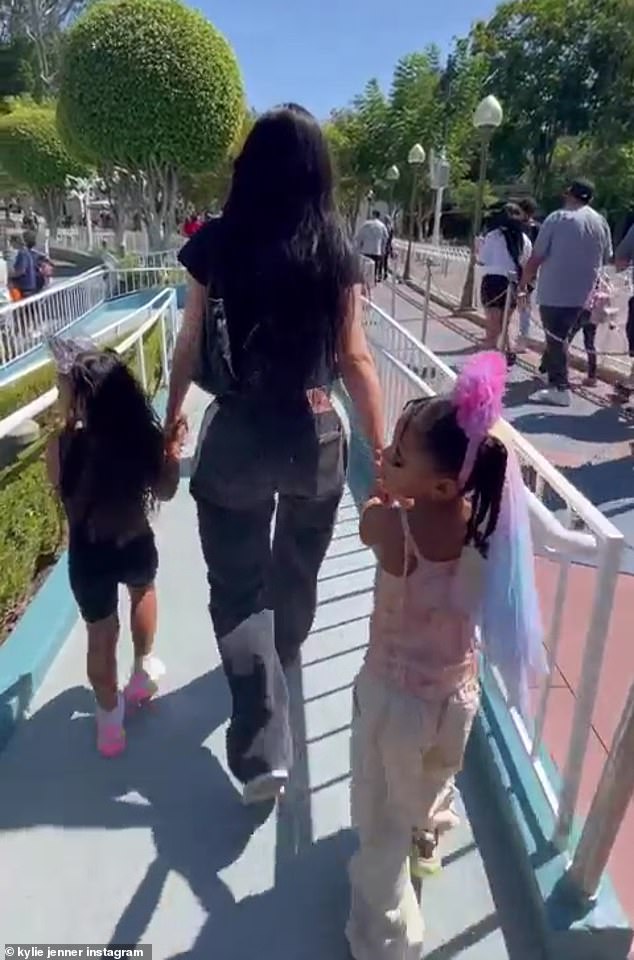 Under the sun: The star was seen leading the way under the bright sun as they made their way through the theme park

When talking about her daughter to People, Kylie stated, ‘Stormi is my legacy. I’m raising her to be smart and kind and driven.’

The entrepreneur brought up Stormi during an interview with CR Fashion Book, revealing that she saves all of her expansive wardrobe for her daughter.

‘I save everything for my daughter. I have the most amazing pieces, and I cannot wait to share my entire archive with her when she is older,’ she stated.

‘I’m so excited to see how she is going to wear and style them! And hopefully she wears one of my Met dresses to prom.’

Kylie and her family will be seen on the upcoming second season of The Kardashians, which is set to premiere on Hulu on September 22. 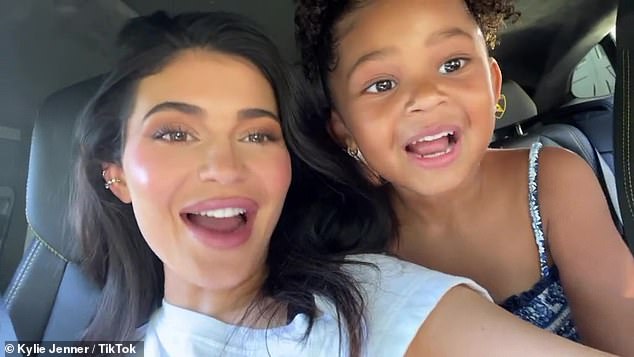 Mother daughter duo: Kylie and her daughter, Stormi, appear to have a close bond and relationship 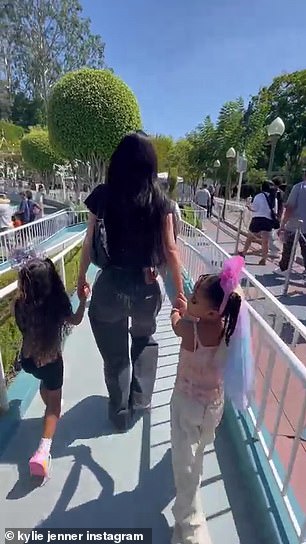 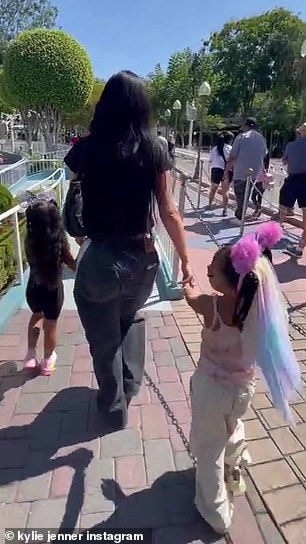 Fashion inspiration: During a recent interview with CR Fashion Book, the reality star stated she keeps all her fashion pieces for her daughter and that she, ‘cannot wait to share my entire archive with her when she is older’