By Daniel Martin and Eleanor Hayward For The Daily Mail

Labour has pledged to strengthen laws banning hunting with hounds – by adding the possible threat of prison sentences.

Ahead of the annual Boxing Day hunts, environment spokesman Sue Hayman said an incoming Labour government would review Hunting Act penalties to ensure there is an effective deterrent.

This would include a consultation on introducing jail terms – bringing the law in line with the penalties for other wildlife crimes.

Mrs Hayman said the party would also consider measures to prevent the exploitation of ‘loopholes’ in the 2004 legislation, which covers England and Wales.

Tradition: Essex Hunt on Boxing Day in Matching Green village. Around 250,000 people will gather across the country today for the busiest date in the fox hunting calendar

It could include a new ‘recklessness’ clause to prevent trail or drag hunts being used as cover for the illegal hunting of wild mammals.

Mrs Hayman insisted: ‘Labour’s 2004 Hunting Act was a key milestone in banning this cruel blood sport, but since then new practices have developed to exploit loopholes in the legislation.

‘While Theresa May proposed scrapping the Hunting Act altogether, Labour is today calling time on those who defy the law by announcing several measures that would clampdown on illegal hunting. Labour is the true party of animal welfare.

‘These new proposals form part of the next chapter in striving to ensure our laws and regulations on animal welfare are up to date and fit for purpose.’ 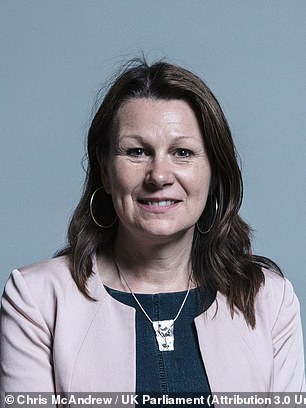 Labour’s promise came as a poll commissioned by the League Against Cruel Sports found only one in six rural residents believe hunting with dogs reflects countryside values. The polling by Survation found that more than nine in ten think that observing nature reflects true rural values.

Around 250,000 people will gather across the country today for the busiest date in the fox hunting calendar.

But there are fears Boxing Day hunts could descend into ugly violence amid escalating tension with animal rights campaigners.

The Countryside Alliance has claimed hunts are being ‘plagued by balaclava-clad animal rights activists intent on breaking the law’. It alleged protesters have called children on ponies ‘murderers’, trespassed on private land and wrecked riders’ cars.

In ongoing clashes, a female anti-hunt activist was airlifted to hospital on December 16 after suffering an alleged ‘unprovoked attack’ by members of the Eggesford Hunt in Devon.

Earlier this month a hunt saboteur’s car was attacked with a hammer in Leicestershire while a farmer dumped a tractor-load of manure on a van full of activists in Staffordshire.

Activists claim hunts flout the 2004 ban by pretending to lay false scents – in a practice known as trail hunting – only to set hounds on real foxes. Chris Pitt, of the League Against Cruel Sports, said: ‘The hunts are behaving as they did before the fox hunting ban was introduced, killing thousands of foxes and sadly getting away with their brutal and barbaric “sport”.

A spokesman for the Countryside Alliance said: ‘Hunts comply with the Hunting Act 2004.’