An anonymous source inside the company disclosed the thread to Breitbart, which reported this week that Google has a ‘blacklist’ containing search terms that are deemed sensitive and thus should be manually filtered.

The thread, if authentic, would appear to go against Google CEO Sundar Pichai’s sworn testimony in front of Congress last month that the company does not ‘manually intervene’ in its Google search results.

When asked about the alleged blacklist, one Google engineer indicated in the thread that interventions regularly occur in search results delivered by Google Assistant, Google Home and Google-owned video platform YouTube – and in rare cases, even on Google’s organic search.

‘The bar for changing classifiers or manual actions on span in organic search is extremely high. However, the bar for things we let our Google Assistant say out loud might be a lot lower,’ he explained.

A leaked internal Google discussion thread reportedly indicates that the tech giant regularly manipulates search results on some of its products. An anonymous source inside the company disclosed the thread which allegedly points to the existence of a ‘blacklist’ containing search terms that are deemed sensitive and thus should be manually filtered. The report goes against Google CEO Sundar Pichai’s sworn testimony in front of Congress last month (above) that the company does not ‘manually intervene’ on search results

While searches on the tech giant’s video platform YouTube are managed slightly differently to the main search tool, Google.com, thanks to the way videos and related content are promoted to users.

But a Google spokesman insisted that: ‘Google has never manipulated or modified the search results or content in any of its products to promote a particular political ideology.’

According to the Breitbart source, a Google software engineer started the discussion thread after learning that abortion-related search results had been manipulated.

The source said the manual intervention was ordered after a Slate journalist inquired about the prominence of pro-life videos on YouTube.

In response, pro-life videos were allegedly replaced with pro-abortion videos in the top ten results, the software engineer said, calling that change a ‘smoking gun’.

‘The Slate writer said she had complained last Friday and then saw different search results before YouTube responded to her on Monday,’ the employee wrote. ‘And lo and behold, the [changelog] was submitted on Friday, December 14 at 3:17 PM.’

The videos that were allegedly downranked manually included several posts from Dr Antony Levatino, a former abortion doctor who is now a pro-life activist, as well as one featuring conservative pundit Ben Shapiro.

The majority of the videos that now occupy the top 10 slots ranked by relevance are explanatory, with titles including: ‘Pregnancy & Menopause: Getting Pregnant After an Abortion’ and ‘What The Average Abortion Looks Like’.

A spokesperson for YouTube told DailyMail.com: ‘We’ve been very public in explaining that we work to surface authoritative news sources for topical information.

The spokesperson added that when the changes were made, no videos were removed from the site and the ones that were shifted ‘contained misinformation alongside graphic images’. 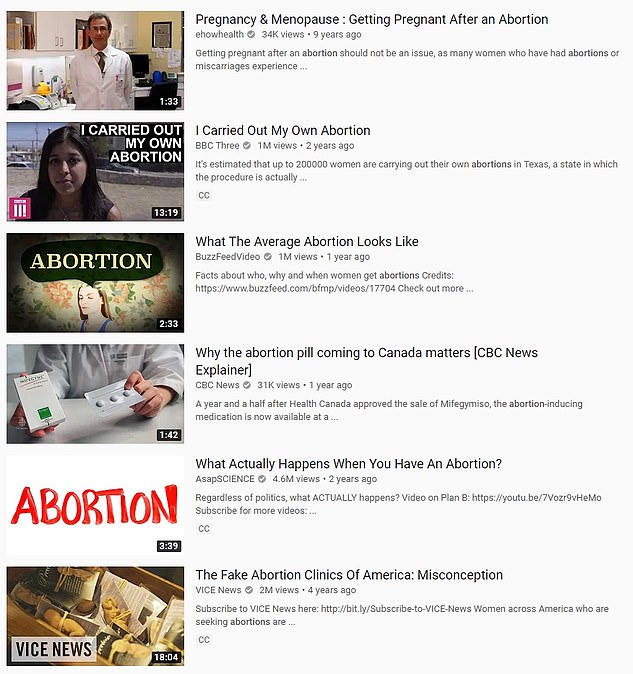 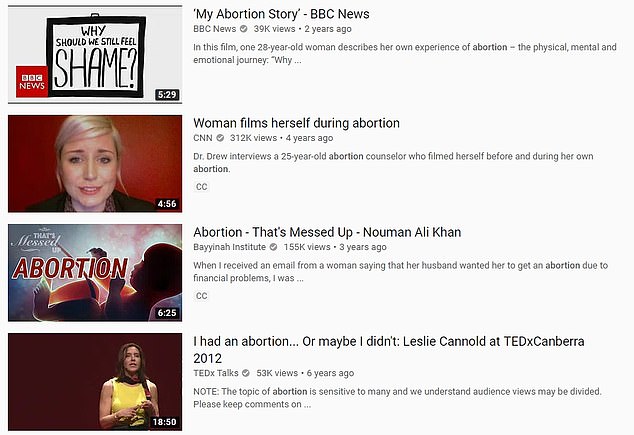 According to the Breitbart source, a Google software engineer started the discussion thread after learning that abortion-related search results had been manipulated. The source said the manual intervention was ordered after a Slate journalist inquired about the prominence of pro-life videos on YouTube. In response, pro-life videos were replaced with pro-abortion videos in the top ten results. The majority of the videos that currently occupy the top 10 slots when ranked by relevance (seen above) are largely explanatory pieces

The Slate journalist, April Glaser, had written that the videos contained ‘dangerous misinformation’ in her story published December 21.

She wrote: ‘Before I raised the issue with YouTube late last week, the top search results for ‘abortion’ on the site were almost all anti-abortion—and frequently misleading.

‘One top result was a clip called ‘LIVE Abortion Video on Display’, which over the course of a gory two minutes shows images of a formed fetus’ tiny feet resting in a pool of blood.

The following terms were allegedly included in a screenshot of a YouTube search query blacklist leaked to Breitbart by a Google insider:

In addition, Breitbart said ‘abortion’,  ‘Ireland abortion referendum’ and ‘Maxine Waters’ were on the list

‘Several of the top results featured a doctor named Antony Levatino, including one in which he testified to the House Judiciary Committee that Planned Parenthood was aborting fetuses ‘the length of your hand plus several inches’ in addition to several misleading animations that showed a fetus that looks like a sentient child in the uterus.

‘The eighth result was a video from conservative pundit Ben Shapiro, just above a video of a woman self-narrating a blog titled, ‘Abortion: My Experience,’ with text in the thumbnail that reads, ‘My Biggest Mistake.’

‘Only two of the top 15 results struck me as not particularly political, and none of the top results focused on providing dispassionate, up-to-date medical information.

In the report, Glaser noted that the search results changed shortly after she contacted Google.

In the discussion thread, a site reliability engineer allegedly says: ‘We have tons of white- and blacklists that humans manually curate. Hopefully this isn’t surprising or particularly controversial.’

In one lengthy post, an employee named Daniel Aaronson, who claims to be a member of Google’s ‘Trust & Safety’ team, offers a lengthy explanation for the conditions under which search results would be adjusted.

He says adjustments are based on ‘determined by pages and pages of policies worked on over many years and many teams to be fair and cover necessary scope’.

Replying to Breitbart’s request for comment, a YouTube spokesperson said: ‘YouTube is a platform for free speech where anyone can choose to post videos, as long as they follow our Community Guidelines, which prohibit things like inciting violence and pornography. We apply these policies impartially and we allow both pro-life and pro-choice opinions.

‘Over the last year we’ve described how we are working to better surface news sources across our site for news-related searches and topical information. We’ve improved our search and discovery algorithms, built new features that clearly label and prominently surface news sources on our homepage and search pages, and introduced information panels to help give users more authoritative sources where they can fact check information for themselves.’ 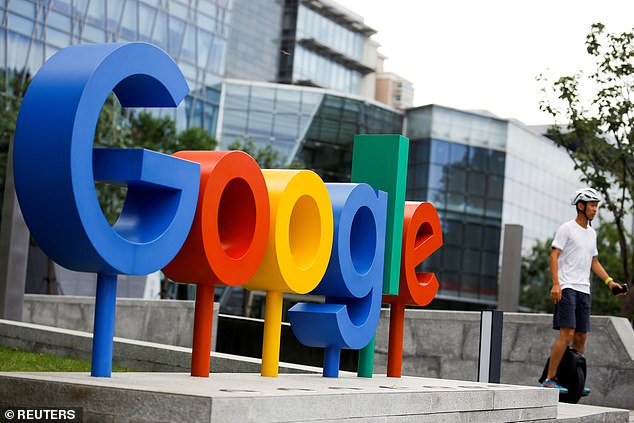 Pichai told US lawmakers that employees are not able to influence the results it shows users, despite accusations from some conservative voices, including President Donald Trump, who has on multiple occasions accused Google of providing ‘rigged’ search results with negative news about himself and fellow Republicans.

Answering a question from Congressman Lamar Smith, Pichai added: ‘It is not possible for an individual employee to manipulate our search results.’

Lawmakers grilled the CEO on why images of President Trump appear at the top of Google Images when you search the word ‘idiot’, in a bid to understand how its search algorithms work.

A Google insider revealed that employee Daniel Aaronson provided the following comment about the conditions under which search results would be adjusted.

‘I work in Trust and Safety and while I have no particular input as to exactly what’s happening for YT I can try to explain why you’d have this kind of list and why people are finding lists like these on Code Search.

‘When dealing with abuse/controversial content on various mediums you have several levers to deal with problems. Two prominent levers are ‘Proactive’ and ‘Reactive’:

‘Manually reacting to things is not very scalable, and is not an ideal solution to most problems, so the proactive lever is really the one we all like to lean on. Ideally, our classifiers/algorithm are good at providing useful and rich results to our users while ignoring things at are not useful or not relevant. But we all know, this isn’t exactly the case all the time (especially on YouTube).

‘From a user perspective, there are subjects that are prone to hyperbolic content, misleading information, and offensive content. Now, these words are highly subjective and no one denies that. But we can all agree generally, lines exist in many cultures about what is clearly okay vs. what is not okay. E.g. a video of a puppy playing with a toy is probably okay in almost every culture or context, even if it’s not relevant to the query. But a video of someone committing suicide and begging others to follow in his/her footsteps is probably on the other side of the line for many folks.

‘While my second example is technically relevant to the generic query of ‘suicide’, that doesn’t mean that this is a very useful or good video to promote on the top of results for that query. So imagine a classifier that says, for any queries on a particular text file, let’s pull videos using signals that we historically understand to be strong indicators of quality (I won’t go into specifics here, but those signals do exist). We’re not manually curating these results, we’re just saying ‘hey, be extra careful with results for this query because many times really bad stuff can appear and lead to a bad experience for most users’. Ideally the proactive lever did this for us, but in extreme cases where we need to act quickly on something that is so obviously not okay, the reactive/manual approach is sometimes necessary. And also keep in mind, that this is different for every product. The bar for changing classifiers or manual actions on span in organic search is extremely high. However, the bar for things we let our Google Assistant say out loud might be a lot lower. If I search for ‘Jews run the banks’ – I’ll likely find anti-semitic stuff in organic search. As a Jew, I might find some of these results offensive, but they are there for people to research and view, and I understand that this is not a reflection of Google feels about this issue. But if I ask Google assistant ‘Why do Jews run the banks’ we wouldn’t be similarly accepting if it repeated and promoted conspiracy theories that likely pop up in organic search in her smoothing voice.

‘Whether we agree or not, user perception of our responses, results, and answers of different products and mediums can change. And I think many people are used to the fact that organic search is a place where content should be accessible no matter how offensive it might be, however, the expectation is very different on a Google Home, a Knowledge Panel, or even YouTube.

‘These lines are very difficult and can be very blurry, we are all well aware of this. So we’ve got huge teams that stay cognizant of these facts when we’re crafting policies considering classifier changes, or reacting with manual actions – these decisions are not made in a vacuum, but admittedly are also not made in a highly public forum like TGIF or IndustryInfo (as you can imagine, decisions/agreement would be hard to get in such a wide list – image if all your CL’s were reviewed by every engineer across Google all the time). I hope that answers some questions and gives a better layer of transparency without going into details about our ‘Pepsi formula’.