Learning remotely could increase the risk of depression in older schoolchildren, study warns

Learning online, rather than in a classroom, comes with an increased risk of depression and anxiety for older schoolchildren, according to a new study.

Researchers analysed parent-reported mental health outcomes for more than 2,000 school-age children living in Canada at the time of the Covid-19 outbreak.

For the study, the experts, from the Hospital for Sick Children in Toronto, explored links between different types of screen use and mental health.

They found that there was a clear link between parent-reported anxiety and depression in older children, who were having to use a screen for education.

‘These findings suggest that policy intervention, as well as evidence-informed social supports, may be required to promote healthful screen use and mental health in children and youth during the pandemic and beyond,’ the team wrote.

Learning online, rather than in a classroom, comes with increase risk of depression and anxiety for older schoolchildren, according to a new study. Stock image

This study included 2,026 children from Canada, living during the Covid-19 pandemic.

A total of 532 were included in the TARGetKids! cohort, with an average age of 5.9 years.

There were another three cohorts, made up of the remaining 1,494 children with an average age of 11.3.

Of the group, 237 children had a previous diagnosis of an Autism Spectrum Disorder (ASD).

The scientists behind the study also found that increased TV watching and gaming in younger children during the outbreak led to higher levels of depression, anxiety, behavioural problems and hyperactivity.

There was no increased risk of these conditions in children with Autism Spectrum Disorders, according to the experts.

They say this could be due to their already higher level of screen use, and lower level of social interaction.

‘The COVID-19 pandemic has resulted in major changes in the daily routines of children,’ the researchers said.

This was ‘primarily because of the imposed public health measures related to distancing, isolation, and school closures,’ the team explained.

To understand what impact this could have had on the mental health of young people, researchers examined a number of cohort studies.

This study included 2,026 children with an average age of 6 and roughly split evenly between male and female participants.

Higher TV or digital media time, including gaming, was linked to higher levels of behavioural problems and hyperactivity in children aged 2-4, they discovered.

In older children and youth, with an average age of 11, watching more TV and gaming was linked to higher levels of depression, anxiety and inattention.

This group also experienced higher levels depression and anxiety as a result of online learning, due to school closures or isolation.

This ties in with pre-Covid research, that consistently showed high levels of screen use were linked to depression, anxiety, conduct disorders, and attention problems in children and youth, the team said.

Evidence, from the same cohort of children, also found that social isolation, not just screen time, was linked to deterioration of mental health.

‘In addition to high screen use and social isolation, the worsening of child mental health could be related to the displacement of sleep, physical exercise, and other prosocial activities, which were disrupted during the pandemic,’ they wrote. 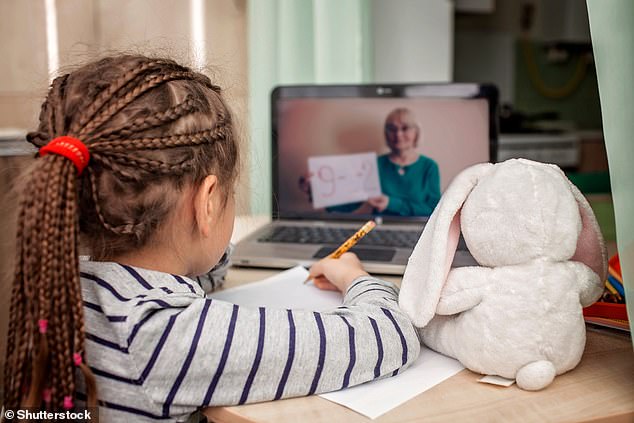 Researchers analysed parent-reported mental health outcomes for more than 2,000 school-age children living in Canada at the time of the Covid-19 outbreak. Stock image

‘The exposure to online bullying, stressful news, and harmful advertisements during screen use could also contribute to poor child mental health during the pandemic.’

The team thought that Zoom calls would be able to improve children’s mental health, as it allowed them to connect with friends, but that wasn’t the case.

The researchers hypothesised that Zoom calls could improve children’s mental health by connecting them with friends, but did not find that to be the case.

The findings have been published in the journal JAMA Network Open.

METHODS FOR PARENTS TO KEEP THEIR CHILDREN SAFE ONLINE

Children as young as two are using social media, research from charity Barnardo’s has suggested.

Internet companies are being pushed to do more to combat harmful content online but parents can also take steps to alter how their children use the web.

Here are some suggestions of how parents can help their children.

Both iOS and Google offer features that enable parents to filter content and set time limits on apps.

For iOS devices, such as an iPhone or iPad, you can make use of the Screen Time feature to block certain apps, content types or functions.

On iOS 12, this can be done by going to settings and selecting Screen Time.

For Android, you can install the Family Link app from the Google Play Store.

Talk to your children

Many charities, including the NSPCC, say talking to children about their online activity is vital to keep them safe.

Its website features a number of tips on how to start a conversation with children about using social media and the wider internet, including having parents visit sites with their children to learn about them together and discussing how to stay safe online and act responsibly.

There are tools available for parents to learn more about how social media platforms operate.

Net Aware, a website run in partnership by the NSPCC and O2, offers information about social media sites, including age requirement guidance.

The guidelines, published in April, suggest children aged between two and five are restricted to an hour of daily sedentary screen time.