He’s on a wing and a prayer! Lewis Hamilton raises eyebrows with yet another risky sartorial statement as he steps out in bird printed trousers at the F1 Grand Prix

Lewis Hamilton showcased his bold sense of style once again as he stepped out ahead of the F1 Grand Prix in Saudi Arabia on Thursday.

The racing driver, 36, took a sartorial risk in a black Paradis silk vest featuring embroidered hands reaching to the heavens, as if in prayer, while surveying the track at Jeddah Corniche Circuit.

Style: Lewis Hamilton showcased his bold sense of style as he stepped out ahead of the F1 Grand Prix of Saudi Arabia at Jeddah Corniche Circuit on Thursday

The star completed his stylish look with chunky black leather biker boots while accessorising with silver chains and a black designer watch.

Lewis shielded his eyes from the sun and adhered o health and safety protocols by wearing a protective face covering.

Last week in Brazil he set the fastest time in qualifying only to be stripped of the advantage by the stewards for carrying a marginally illegal rear wing. Again, the part on his Mercedes is subject of much chat from rivals Red Bull. 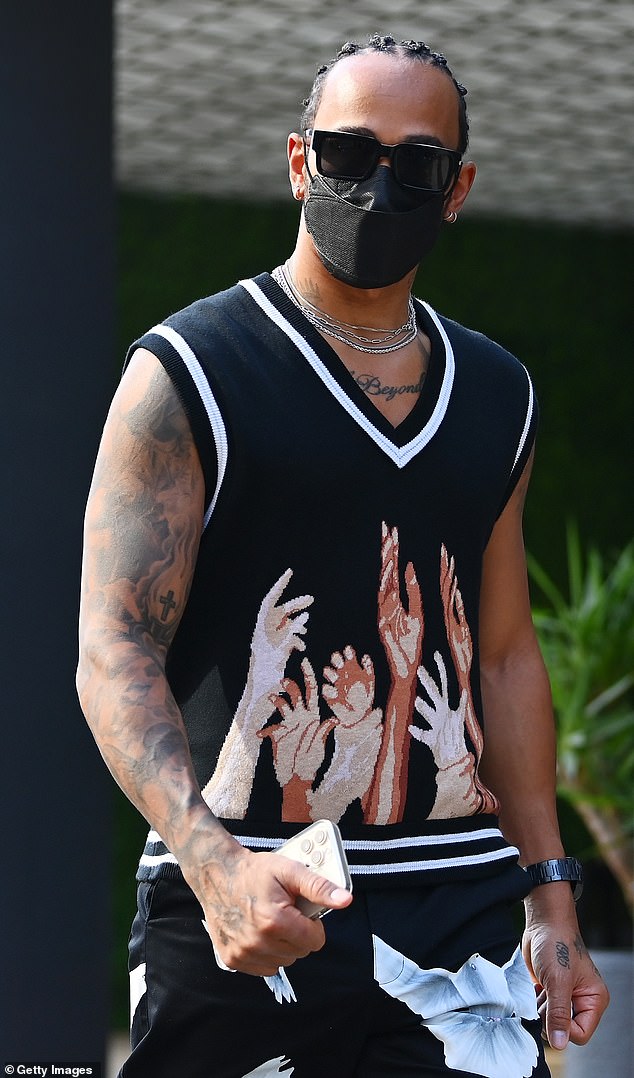 Fashion: The racing driver, 36, stood out from the crowd in a sleeveless T-shirt which featured embroidered hands reaching up 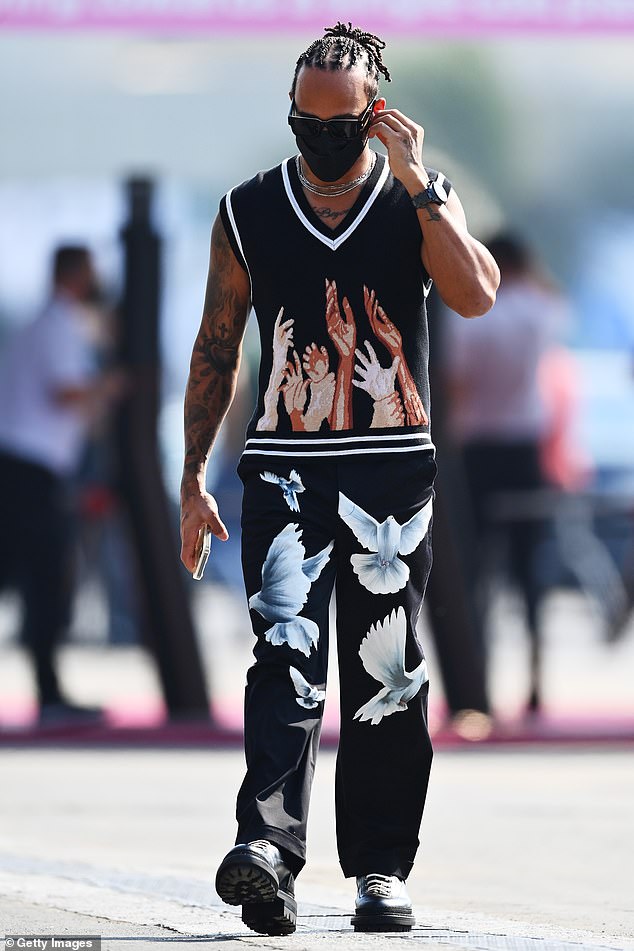 Looking good: He paired his ensemble with quirky trousers which donned a pattern of dove birds flying

Lewis bit back at his critics and said accusing Mercedes of trying to cheat their way to his eighth world title is the ‘worst claim to ever make’.

Red Bull have been particularly incensed with Hamilton’s rear wing and they have looked to the stewards to penalise what they feel has been an unfair advantage in recent weeks.

Upon hearing about the allegations levelled against his car and in particular against his rear wing, Hamilton has revealed he called Mercedes’ chief technical director and chief aerodynamicist to get a better understanding. 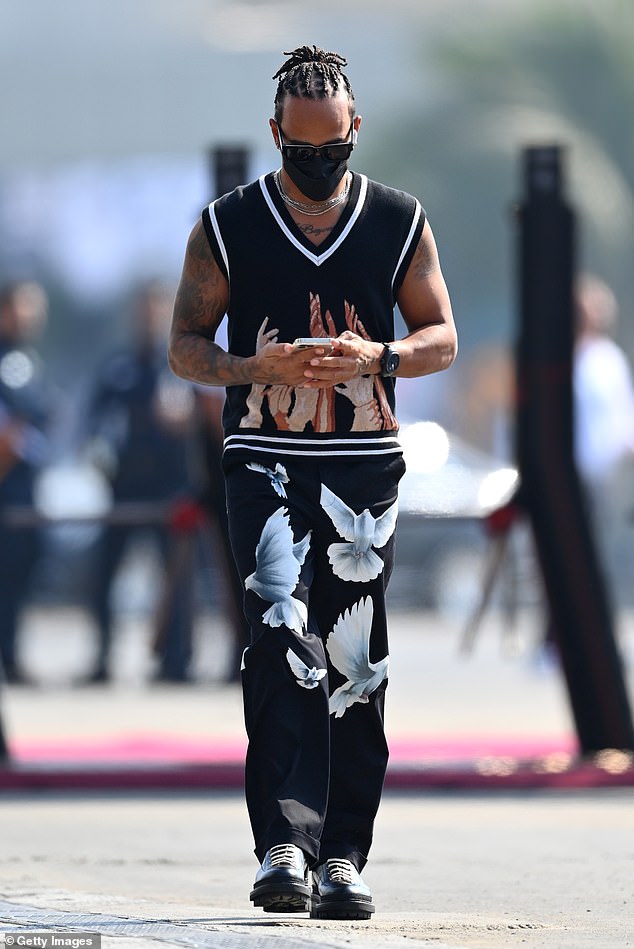 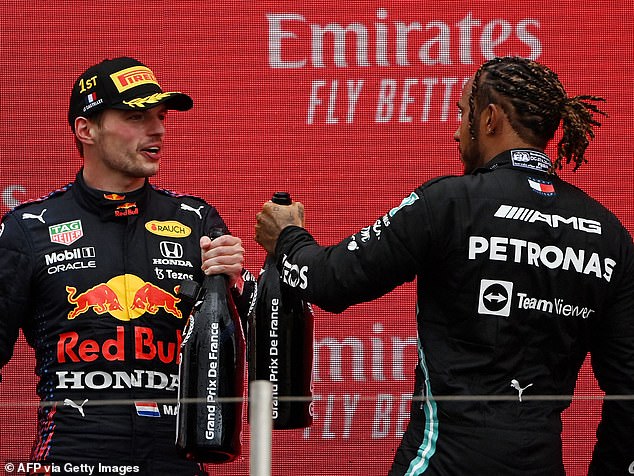 Winner: Lewis and Max Verstappen (L) celebrate on the podium at the end of the French Formula One Grand Prix (pictured in June 2021)

‘We all have egos and that’s what controls our emotions, and it is egos fighting each other,’ Hamilton said, as quoted by the Times.

‘There is defence, there is respect, but I did see someone say something about cheating, and that’s the worst claim to ever make.’

He added: ‘I called James Allison and Mike Elliott and said, “I really want to know about these things,” and they took me through details of where we are.

‘We have done all these tests and this is where it is, but I don’t like it when people put that [cheating accusations] out there.’ 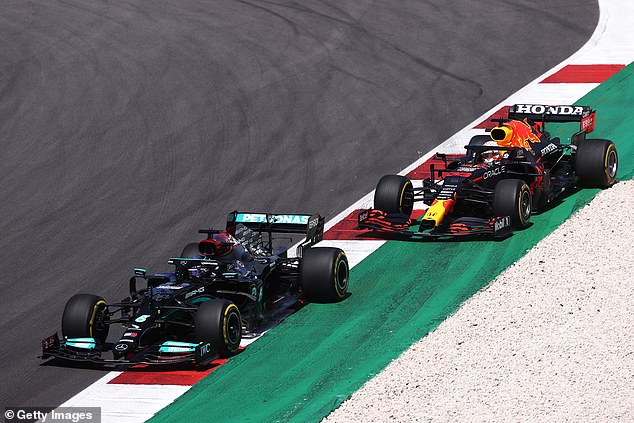 Advantage: Red Bull have been particularly incensed with Hamilton’s rear wing and they have looked to the stewards to penalise what they feel has been an unfair advantage in recent weeks