Lewis Hamilton will not be punished by the Federation Internationale de l’Automobile (FIA) for wearing a t-shirt in honour of Breonna Taylor at the Tuscan Grand Prix last weekend.

The Mercedes driver sported a top which read: ‘Arrest the cops who killed Breonna Taylor’, referring to an African-American woman who was fatally shot by police officers in Louisville, Kentucky, earlier this year.

The governing body looked into whether the t-shirt breached its rules and concluded it did not – but the FIA appears to be moving to ensure there are no repeats by changing its guidelines. ‘The situation is under active consideration for a clarification that will be in place for the next race,’ a spokesman for the FIA told CNN.

This means Hamilton will be told not to wear that kind of t-shirt on the podium again.

British former world champion Damon Hill has given a scathing verdict on how Formula One has handled the controversy, saying Hamilton must not be silenced should he wish to protest.

‘But F1 has always had its head in the sand over any issue that might make people think about anything other than F1.

‘It has to make space for these messages if it is to be embraced by the wider world.’

Reigning world champion Hamilton wore the t-shirt during the ‘taking a knee’ ceremony and on the podium following his 90th career win on Sunday.

The back of the top read: ‘Say her name’ as Hamilton paid tribute to the 26-year-old medical technician who was killed after her boyfriend opened fire on police during a drugs search at their house in March.

Hamilton also raised awareness of Breonna Taylor in his interview following the race.

He said: ‘It was like three races in one day. Just incredibly tough. We had a difficult start.

‘The heat and keeping Valtteri (Bottas) behind, who has been quick all weekend, was not easy. I was behind at the beginning. Total focus was needed for the restarts. It was really, really hard.

‘Keeping that over one-second gap was crucial as I didn’t want them [race rivals] to have DRS on that 1000m straight. Justice for Breonna Taylor.’

He also said: ‘I’ve been wanting to bring awareness to the fact there are people being killed on the street.

‘And someone was killed in her own house and they were in the wrong house and those guys are still walking free.’

The FIA had been considering whether Hamilton had breached article 1.2 of their statutes, which says: ‘The FIA shall refrain from manifesting discrimination on account of race, skin colour, gender, sexual orientation, ethnic or social origin, language, religion, philosophical or political opinion, family situation or disability in the course of its activities and from taking any action in this respect.’ 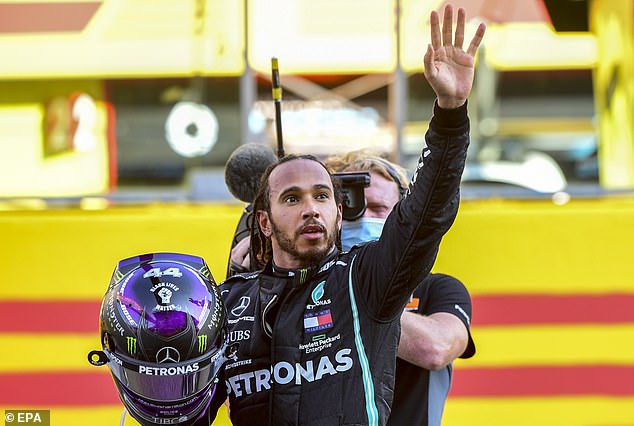 The world champion will not be punished by the FIA for his protest – but there are moves to clarify the rules, possibly meaning Hamilton will be told not to wear such a t-shirt again

The FIA and the sport’s owners Liberty Media have previously tried hard to work with the Brit on his anti-racism fight.

It has become customary this season for Formula One drivers to gather in opposition to racism before the start of races.

Hamilton has been a vocal supporter of the Black Lives Matter movement ever since it rose to global prominence following the death of George Floyd in May.

Hamilton, who continues to lead the way for change in the sport, has used his platforms to condemn racial injustice with incidents such as the deaths of George Floyd and Breonna Taylor, and more recently the shooting of Jacob Blake in Kenosha, Wisconsin.