Liam Payne was pictured arriving in Japan on his son Bear’s first birthday on Thursday, after discussing his relationship woes with girlfriend Cheryl.

The 24-year-old One Direction star had hinted earlier this month he would be spending time away from his only child on the landmark birthday, yet never confirmed his plans for the big day with Bear and the songstress, 33.

Just hours before his trip, he marked the big day with a sweet Instagram tribute, where he called the baby his whole ‘world,’ the pop singer posted a very rare glimpse of the tot as a pictured captured them holding hands.

Touch down: Liam Payne was pictured arriving in Japan on his son Bear’s first birthday on Thursday, after discussing his relationship woes with girlfriend Cheryl

Liam recently opened up about his and Cheryl’s “struggles” to ES Magazine, is in Tokyo to perform at Popspring – Japan’s biggest music festival.

He finally admitted that he’s been experiencing a period of ‘tension’ and ‘struggles’ with girlfriend Cheryl, on Wednesday.

‘Can’t believe my little man is one today,’ Liam captioned his touching post. ‘Where does the time go? Happy birthday son you’re my world.’ 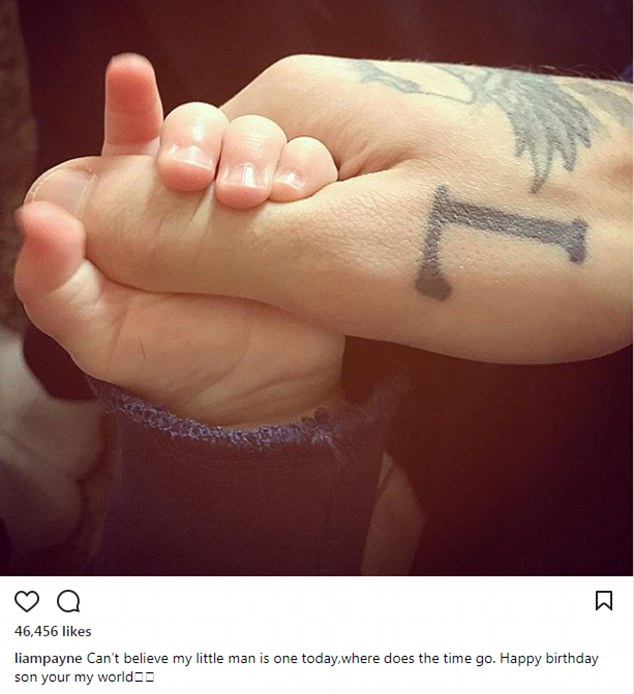 ‘You’re my world’: The 24-year-old One Direction star had hinted earlier this month he would be spending time away from his only child on the landmark birthday, yet never confirmed his plans for the big day with Bear and the songstress, 33

It was understood that Liam would be away in Tokyo on the day that Bear turned one, making it unclear whether the picture was brand new.

In the sweet photo, Liam’s right thumb – inked with an ‘L’ and wings tattoo – is gripped inside tiny Bear’s whole hand.

There was no mention of his 34-year-old other half, and she did take time to thank fans for their support.

‘Thank you so much for all of your beautiful birthday wishes for Bear. have told him he has lots,’ she simply wrote in a Twitter post. 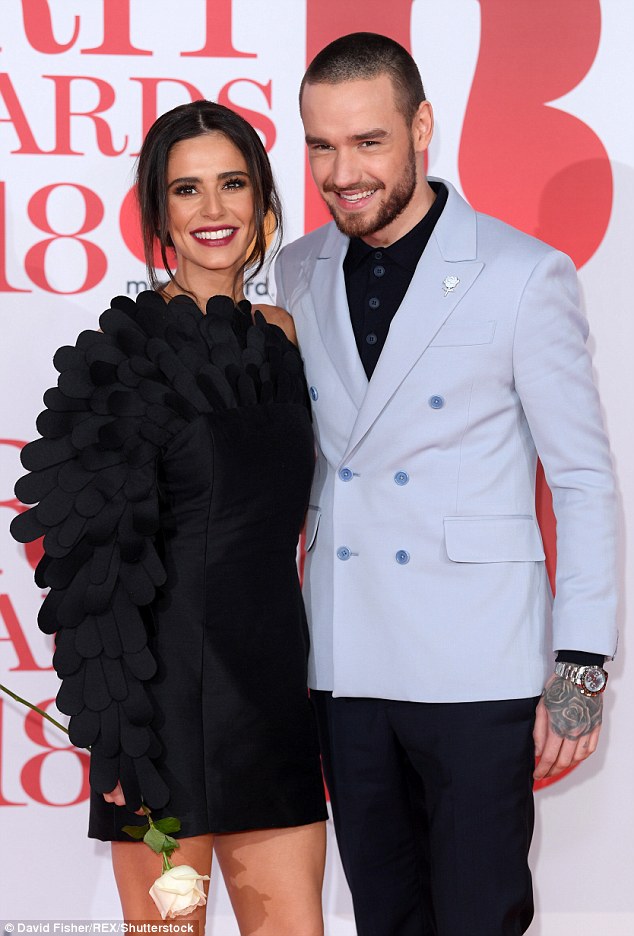 ‘Struggles’: Liam admitted on Wednesday that he and the baby’s mother Cheryl (here in February) had their ‘struggles’

While pictures of the child have been scarce, she has noticeably never made any reference to Bear on Instagram, aside for their birth announcement last March.

On Wednesday, Liam broke his silence on claims his relationship withCheryl was ‘effectively over’ a week before the BRIT Awards 2018.

Talking about reports a split was imminent, Liam told The Evening Standard’s ES Magazine: ‘The funniest thing [about the speculation was that] a week before we were getting married. The next week we’re splitting up.’

The duo previously confronted the claims with a rare joint appearance in a public demonstration of their ‘rock-hard’ relationship. 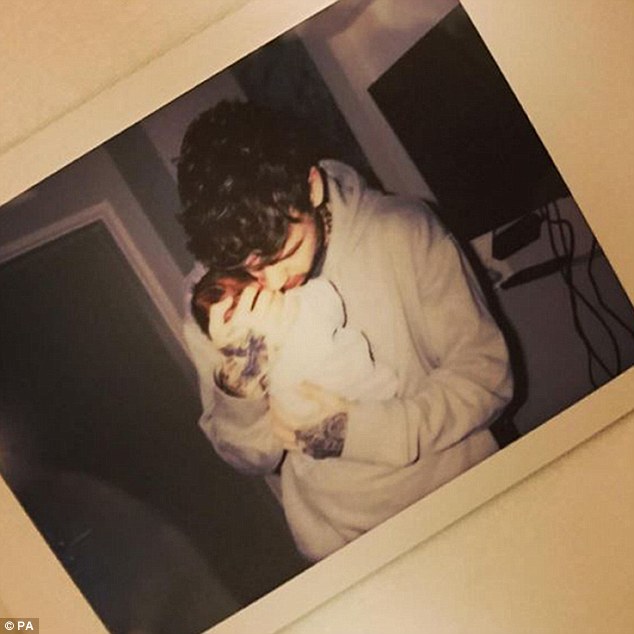 New parents: Liam and Cheryl became parents to son Bear last March, breaking the news with this extremely rare glimpse of the newborn on Instagram

Yet their overly-affectionate outing in late February raised eyebrows with many, as multiple insiders had come forward to say that they were ‘hanging by a thread’.

‘For me,’ he continued. ‘I just like to think we’re somewhere in the middle. You know, we have our struggles — like of course I’m not gonna sit here and say that everything’s absolutely fine and dandy, because of course you go through different things, and that’s what a relationship is.’ 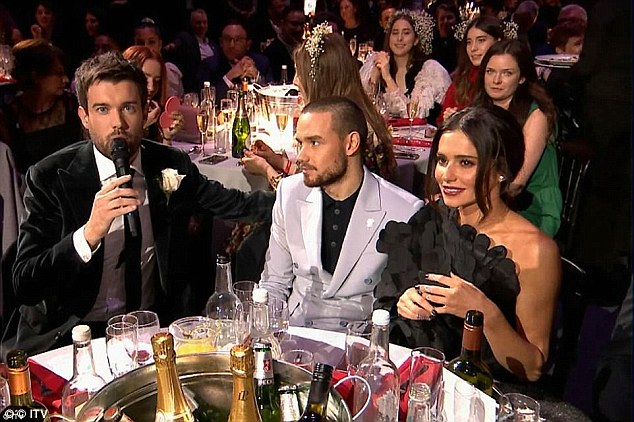 Tension: The duo showed signs that things were not as sweet as they were letting on during their rare joint appearance at the BRITs in February

He went on to say that their rough patch was inevitable but they were focusing on riding the storm ‘together’.

‘There was always going to be a little bit of tenseness in the way we sort ourselves out, but tell me a relationship in the world that doesn’t go through a spot like that?’

Liam and Cheryl – who have a 10-year age gap and first met when he auditioned for the X Factor at 14 – confirmed reports that they were dating in February 2016.

They have been seemingly smitten ever since, and announced the arrival of their first child in March 2017.

Yet more recently, with a distinct lack of joint appearances and some relentless travel for new dad Liam, it has been speculated that things are not so blissful.

Last week, it was revealed that Liam would miss Bear’s first birthday to be in Tokyo for work and he has been consistently accused of putting his work first.

‘Up until now everyone has assumed it’s Cheryl who has gone cold on the relationship but it’s the other way around,’ a source told The Sun two weeks ago. 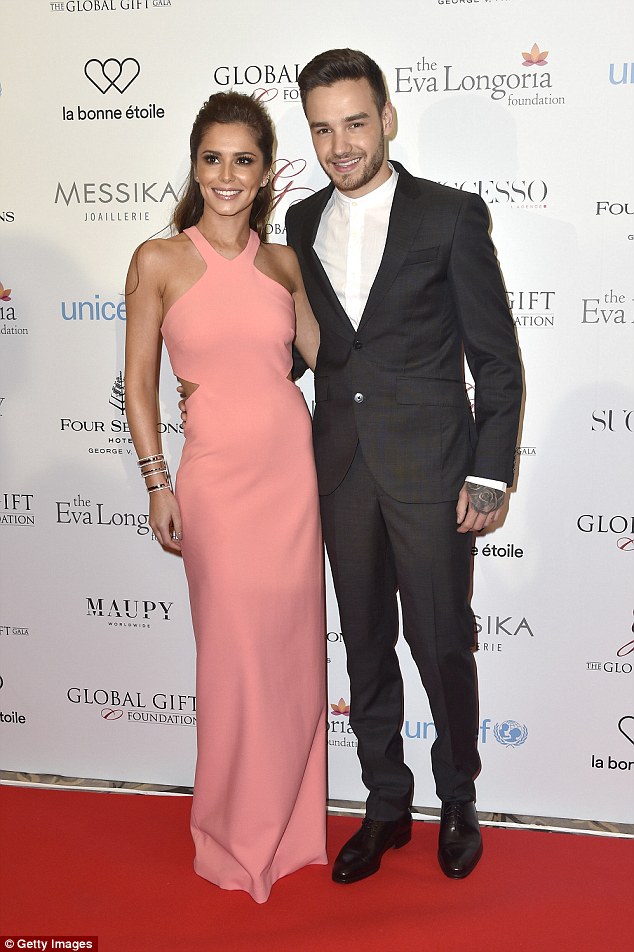 Was it really nearly over? In February, it was consistently reported that Liam and Cheryl were splitting after just two years together 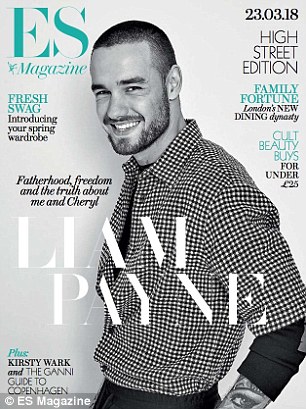 Wedding bells: In the ES interview, due out this week, Liam simultaneously confirms that they have been discussing marriage

‘He was very keen to marry Cheryl early on but she wasn’t up for it because of her two failed marriages,’ the source added. ‘Since then he has been on the road, with [Cheryl’s mother] Joan spending more time at the house.’

The recent interview confirms that Liam and Cheryl did have plans for a wedding in the foreseeable future.

Yet this would be Cheryl’s third marriage, after unsuccessful unions with footballer Ashley Cole and restaurateur Jean-Bernard Fernandez-Versini ended in divorce.

It’s been reported as far back as December 2016 that Liam had plans to propose, and he consistently refers to his girlfriend as ‘the missus’.

Though Mail On Sunday exclusively revealed in February that his time away was driving them apart. 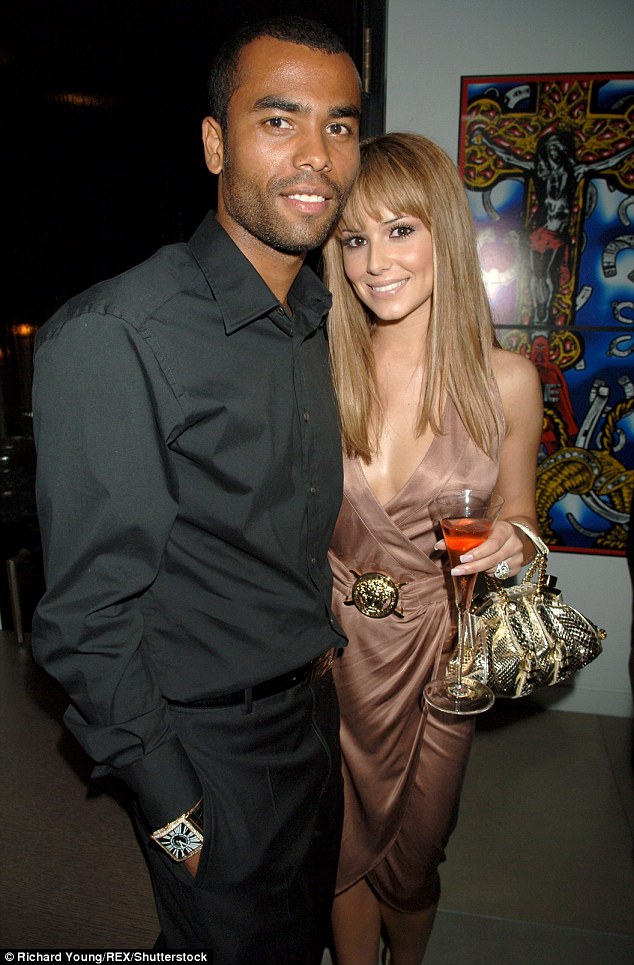 Third time lucky? Cheryl has previously had two failed marriages. One with Ashley Cole (pictured in 2006) and a second, with Jean-Bernard Fernandez-Versini 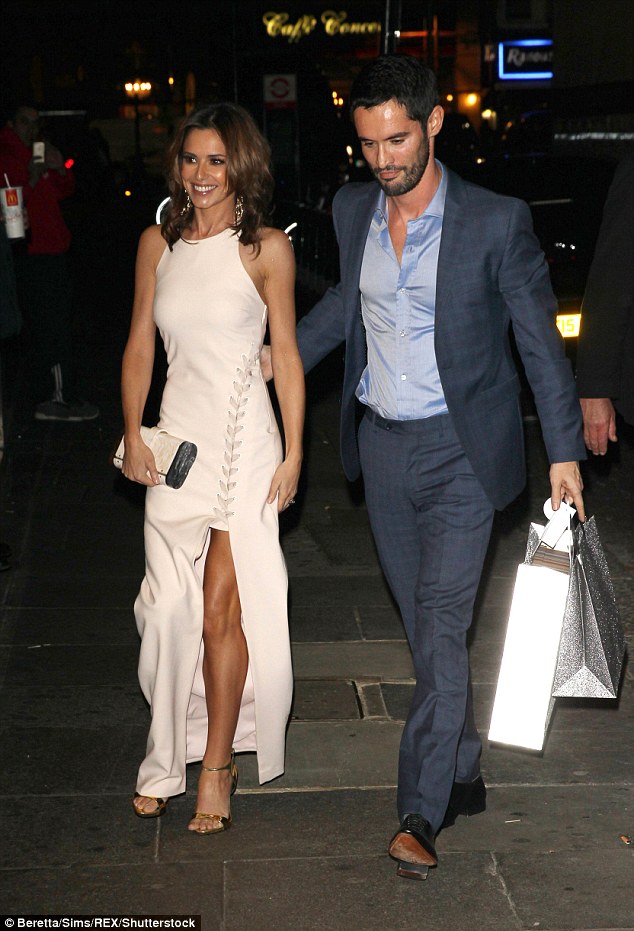 Struggles: Cheryl’s second, brief marriage to Jean-Bernard ended in divorce but lead to Liam shortly after

A source close to Liam admitted that a split was close, saying: ‘It’s very difficult for them and extremely sad. Things go from being very calm to being very tough.

‘The crux of the problem is that Liam has to be away a lot. Cheryl has always understood he would have to work hard and be absent but the reality is that it’s not an easy thing to deal with. This relationship is hanging by a thread. Both of them are devastated.’

A source subsequently told MailOnline that Cheryl was spending a lot of time at home on her own with Bear because she would rather stay in watching soaps on TV than go out to showbiz parties.

Concerned fans had pointed out that the couple had not been pictured together for some time, until their PDA-laden outing at the BRITs, which followed a week later.

With Liam away from the home regularly, Cheryl has also admitted that she has found parenthood ‘challenging’ in Bear’s first year.

Cheryl told The Mirror: ‘It’s challenging, that’s for sure, but when you’re with him it makes none of that relevant.’

Read the full interview in this week’s issue of ES Magazine, out Thursday 22nd March 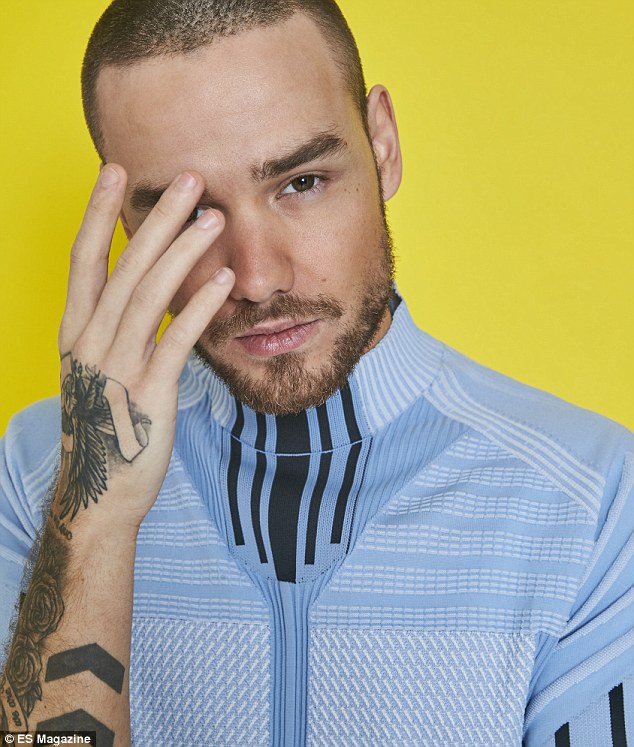 Cover star: Liam’s candid chat with the magazine finally confirms all of the reports 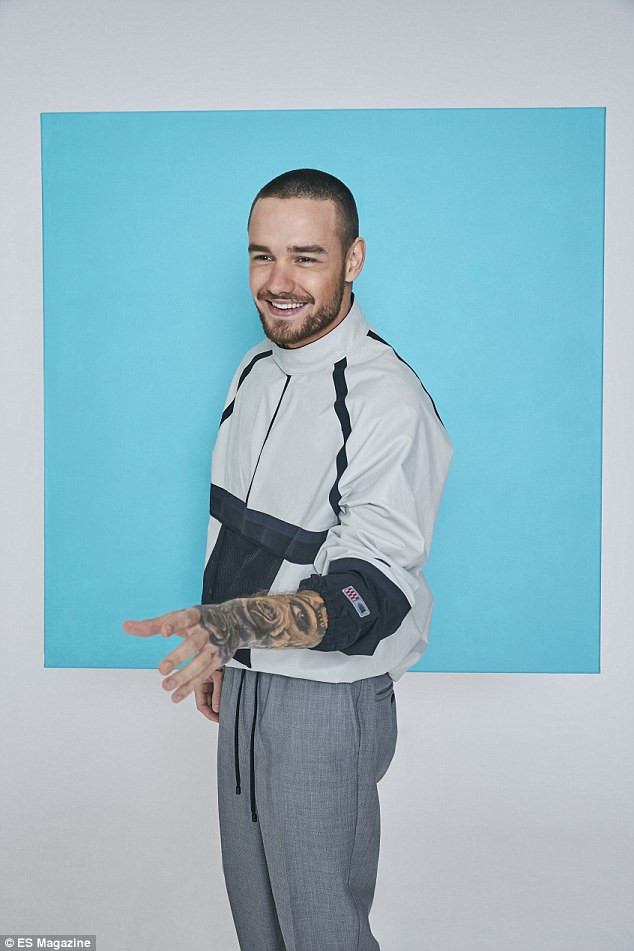 We have our struggles: The musician is a father to one, but unfortunately it’s claimed he will miss his son’s first birthday 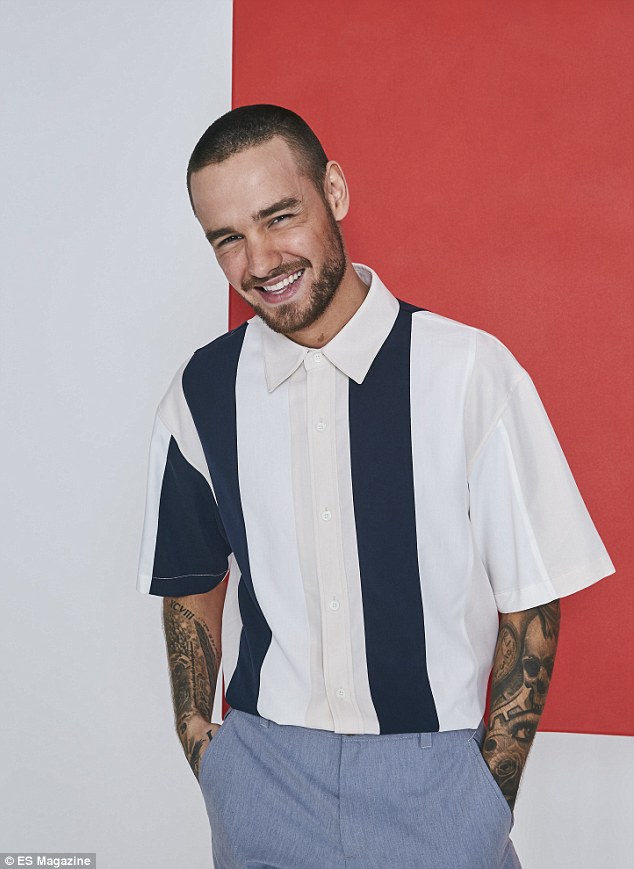 Career-focussed: Liam has spent a lot of time travelling in the last year, with his solo career