Linda Evangelista has admitted she was ‘so depressed’ that she ‘hated herself’ following her CoolSculpting procedure that left her feeling ‘deformed’.

The model, 57, has graced the cover of the September issue of British Vogue where she admitted the faulty procedure caused her to lose her livelihood and left her with things ‘protruding from me’.

The catwalk star – who posed for a new Fendi campaign last month – was keen to make clear that make-up artist Pat McGrath gently drew her face, jaw and neck back with tape and elastics for the photoshoot.

Candid: Linda Evangelista has admitted she was ‘so depressed’ that she ‘hated herself’ following her CoolSculpting procedure that left her feeling ‘deformed’ as she marked her return to modelling by gracing the cover of British Vogue’s September issue 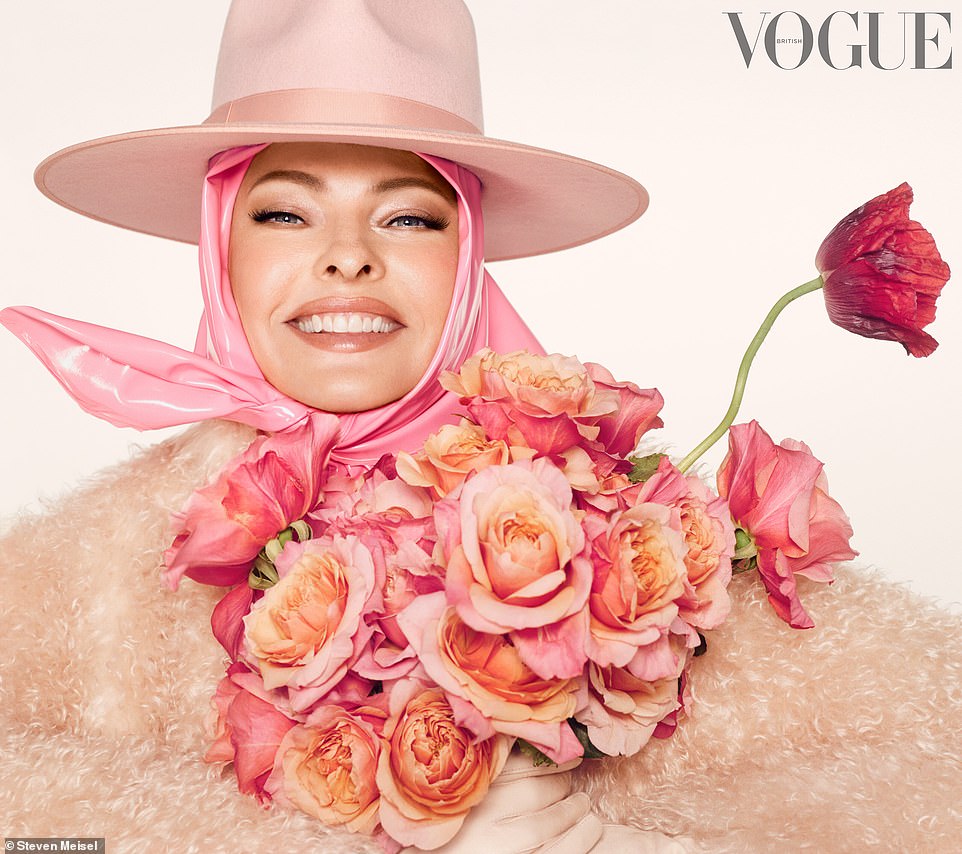 Photoshoot: The catwalk star was keen to make clear that for make-up artist Pat McGrath gently drew her face, jaw and neck back with tape and elastics for the photoshoot 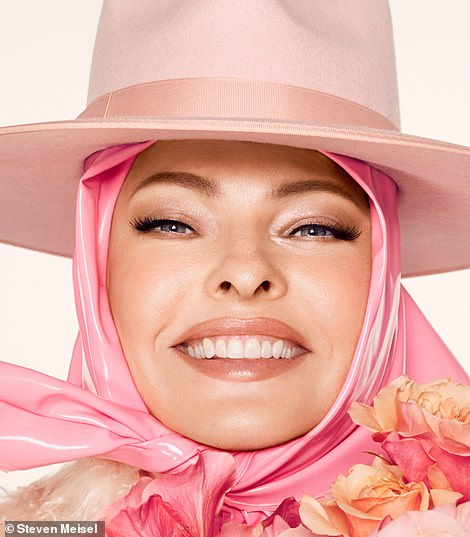 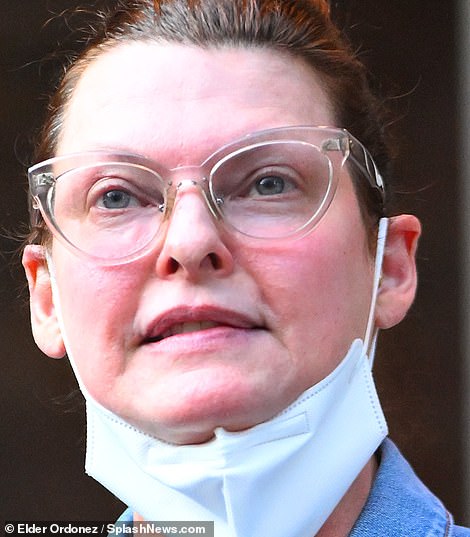 Candid: The model enlisted the help of tape to hold her neck and jaw in place for the magazine shoot (left) , after a rare reaction to the fat-reduction procedure left her with permanent damage (pictured right in June 2022)

She said: ‘That’s not my jaw and neck in real life – and I can’t walk around with tape and elastics everywhere. You know what, I’m trying to love myself as I am, but for the photos.

‘Look, for photos I always think we’re here to create fantasies. We’re creating dreams. I think it’s allowed. Also, all my insecurities are taken care of in these pictures, so I got to do what I love to do.’

Linda was hesistant to call this her ‘comeback’ as she noted she is almost entirely covered in the photoshoot, where she is sporting a scarf around her neck.

In September last year, Linda took to her Instagram to announce that she had filed a lawsuit – since settled – in New York against Zeltiq Aesthetics for grievous injuries. 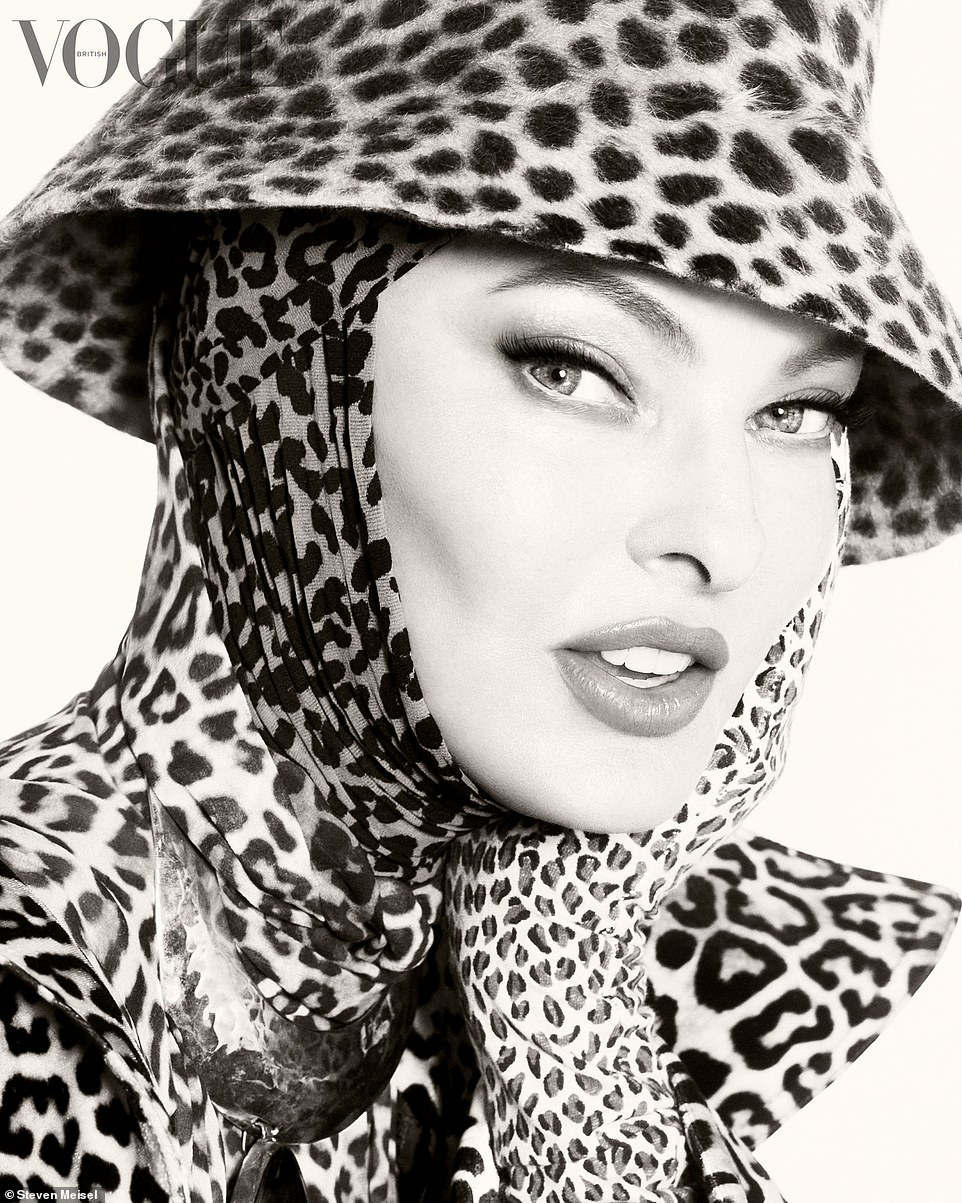 Return: Linda was hesistant to call this her ‘comeback’ as she noted she is almost entirely covered in the photoshoot,but did state that she is learning to ‘love herself’

She said: ‘If I had known side effects may include losing your livelihood and you’ll end up so depressed that you hate yourself…I wouldn’t have taken that risk.’

Speaking about how she is now, Linda said: ‘Am I cured mentally? Absolutely not. But I’m so grateful for the support I got from my friends and from my industry…You’re not going to see me in a swimsuit, that’s for sure.

‘It’s going to be difficult to find jobs with things protruding from me; without retouching, or squeezing into things, or taping things or compressing or tricking…’

Linda said she decided to have the CoolSculpting procedure done afer seeing frequent advertisements for it on TV.

She said: ‘Those CoolSculpting commercials were on all the time, on CNN, on MSNBC, over and over, and they would ask, “Do you like what you see in the mirror?”

‘They were speaking to me. It was about stubborn fat in areas that wouldn’t budge. It said no downtime, no surgery and…I drank the magic potion, and I would because I’m a little vain. So I went for it – and it backfired.’

One of the most famous supermodels in the world, Linda racked up over 60 magazine covers during her hugely successful career.

Looking back on her hectic schedule, she explained: ‘How did I keep going? This is the truth: I was young. You could go out and eat salty fried food and drink Champagne, sleep at 3am and be up again at 5am.

‘Drugs were offered to me, but I never touched them, I’m not saying I was an angel…but I was terrified of drugs.’

Linda had some negative experiences in her early years in the industry, including one incident in Japan where a modelling agency asked her to take all her clothes off.

She said: ‘I went to the agency and it was all, “take your clothes off, we need your measurements”, but they already had my measurements.

‘They wanted me naked and it wasn’t a “would you do nudes” conversation, it was a “you will do nudes”. 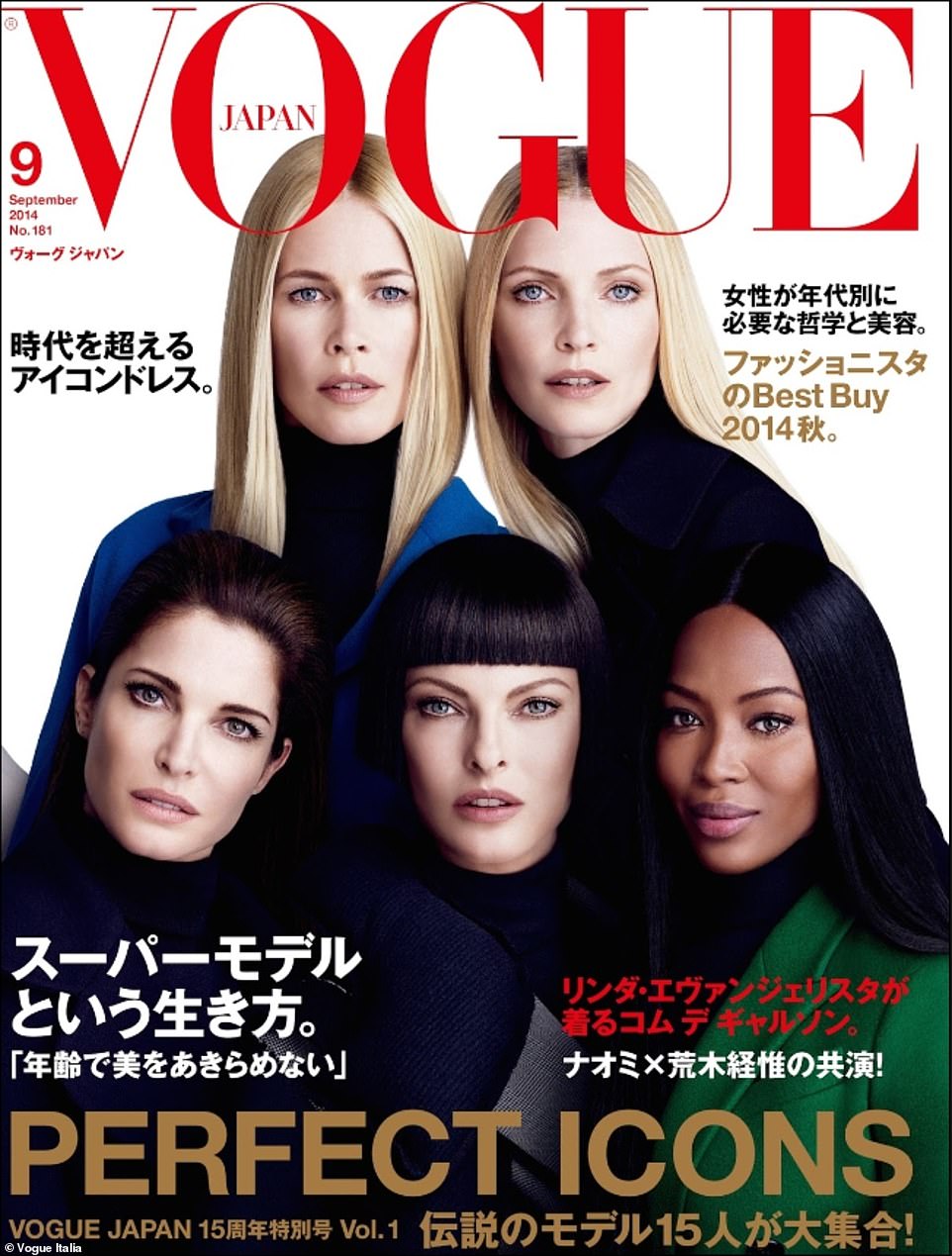 Success: Linda (bottom row, centre) was last on the cover of Vogue Italia in 2014 alongside some of her fellow supermodels

‘I left and called my mother and she said, ‘Get out now and get to the embassy.’ So that’s what I did, and they got me home.’

In July, Linda settled her $50million CoolSculpting lawsuit after claiming a rare reaction to a fatreduction procedure six years ago left her ‘deformed’.

The supermodel said she is ‘happy’ to put the case behind her and is looking forward to ‘a new chapter’ in her life, thanking her friends and family for their support.

In her suit, the runway icon had sought $50million in damages, alleging that she had been left ‘brutally disfigured’ by Zeltiq Aesthetics Inc’s CoolSculpting procedure, which she claimed ‘did the opposite of what it promised.

CoolSculpting – the brand name for cryolipolysis, which uses cold temperatures to reduce fat deposits – is also known as body contouring, and has been approved by the U.S. Food and Drug Administration.

During the procedure, a device that’s set below freezing temperature is applied to fat deposits, which causes cell death in the tissue. 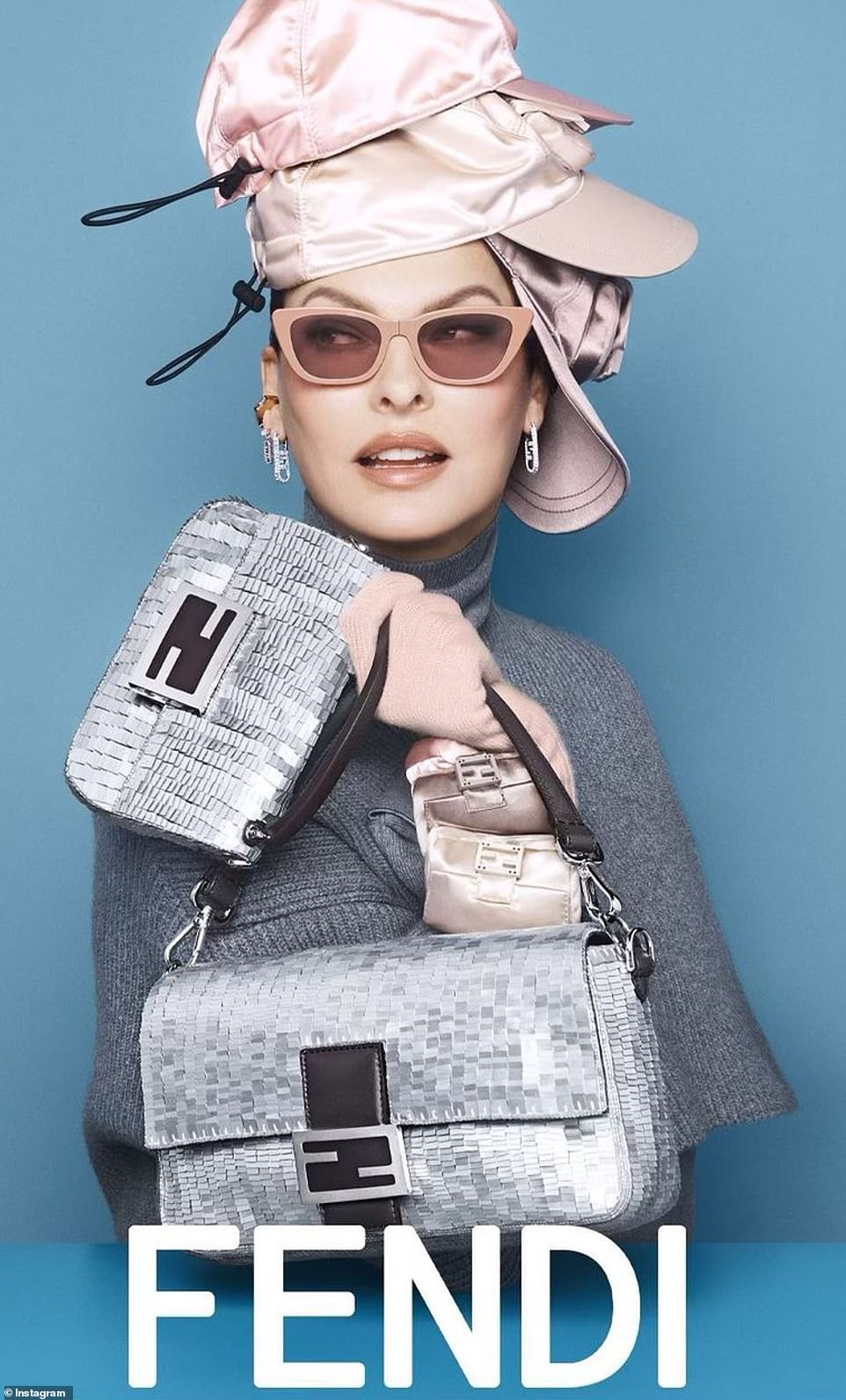 Back to work: In July,  Linda returned to modelling with her first job – a Fendi fashion shoot – since she stopped working following the procedure in 2016

Zeltiq – which is a subsidiary of Allergan – markets and licenses devices used for such procedures.

In a statement to British Vogue, a representative for Zeltiq said: ‘We are pleased to have resolved this matter with Ms Evangelista. Our focus continues to be on empowering confidence by providing safe, reliable aesthetics products and services backed by science.

‘CoolSculpting is an FDA-cleared, non-invasive treatment for visible fat bulges in the nine areas of the body.’

Linda stopped working in 2016, and back in September, she revealed in a shocking Instagram post that the reason she had decided to retreat from the public eye was because she had developed a rare reaction to a cosmetic procedure.

At the time, Linda announced that she had filed a lawsuit suing CoolSculpting’s parent company Zeltiq, claiming she was left ‘permanently deformed’ by the procedure.

She said in an Instagram statement at the time: ‘Today I took a big step towards righting a wrong that I have suffered and have kept to myself for over five years. 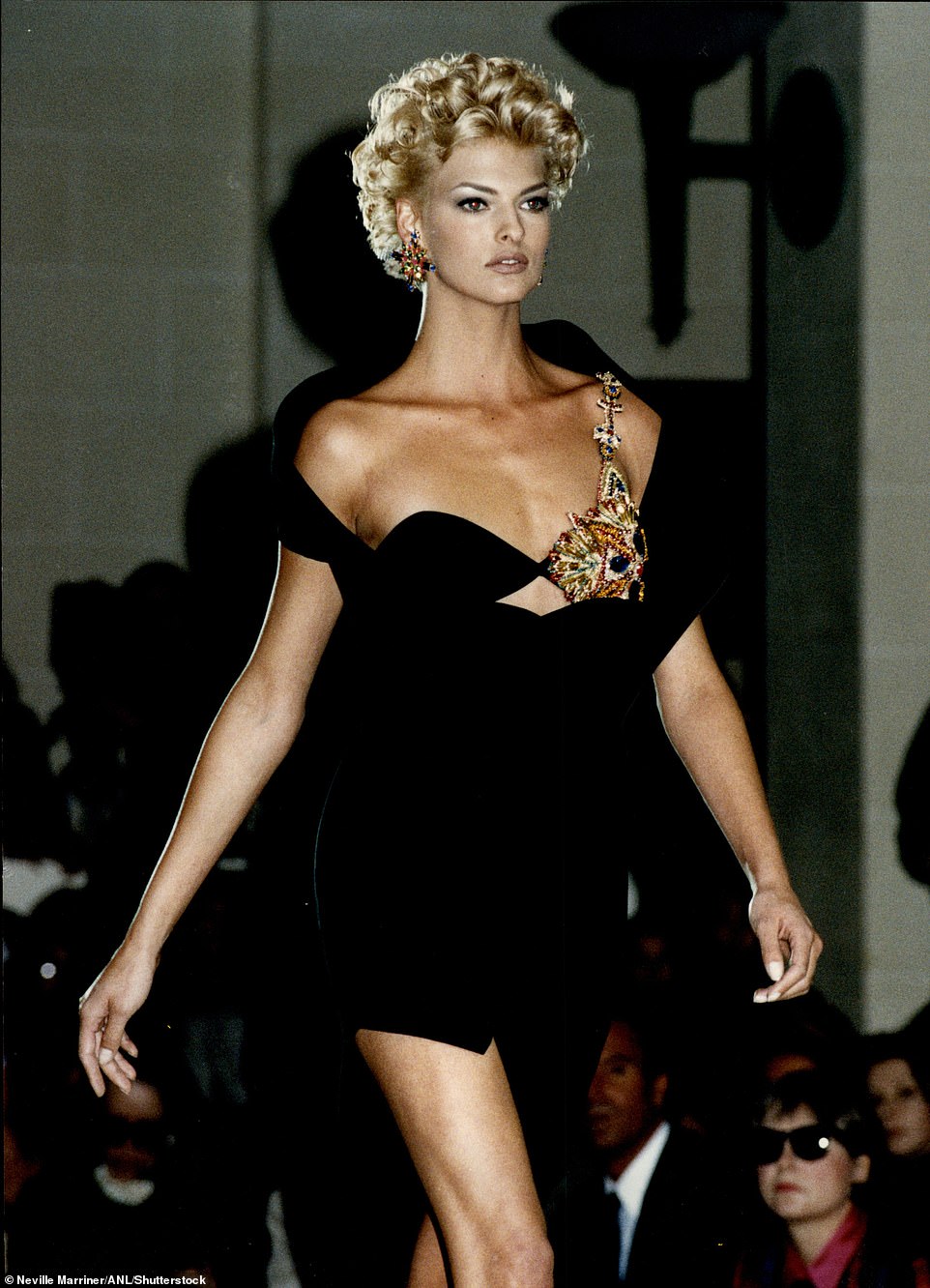 Lawsuit: The supermodel said she is ‘happy’ to put the case behind her and is looking forward to ‘a new chapter’ in her life (pictured on the runway in 1991)

‘To my followers who have wondered why I have not been working while my peers’ careers have been thriving, the reason is that I was brutally disfigured by Zeltiq’s CoolSculpting procedure which did the opposite of what it promised.

‘It increased, not decreased, my fat cells and left me permanently deformed even after undergoing two painful, unsuccessful, corrective surgeries. I have been left, as the media has described, “unrecognisable”.’

Linda also said she had developed paradoxical adipose hyperplasia (PAH), a ‘very rare but serious side effect’ of the fat-freezing procedure’, according to Healthline.

The rare adverse effect of cryolipolysis has been reported in of 0.0051 per cent of the 1.5million CoolSculpting procedures performed worldwide.

With this condition, the treated area becomes larger, rather than smaller. It can leave a ‘painless, visibly enlarged, firm, well-demarcated mass’ underneath the skin.

Referencing a lawsuit, she continued: ‘I have developed Paradoxical Adipose Hyperplasia or PAH, a risk of which I was not made aware before I had the procedures. 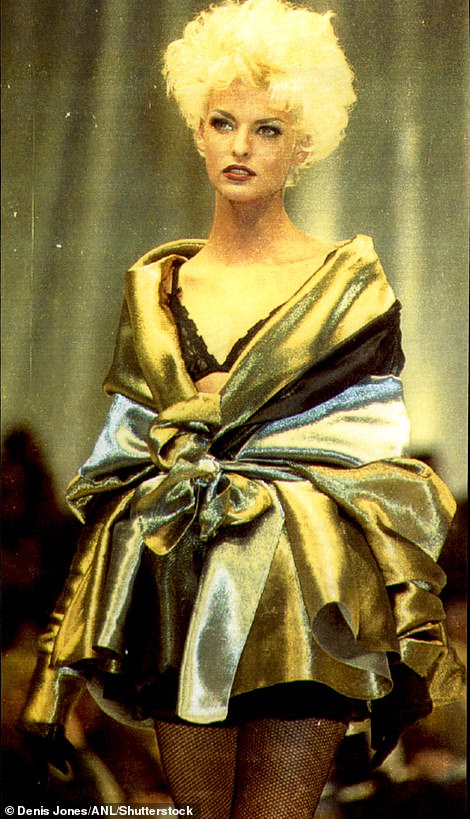 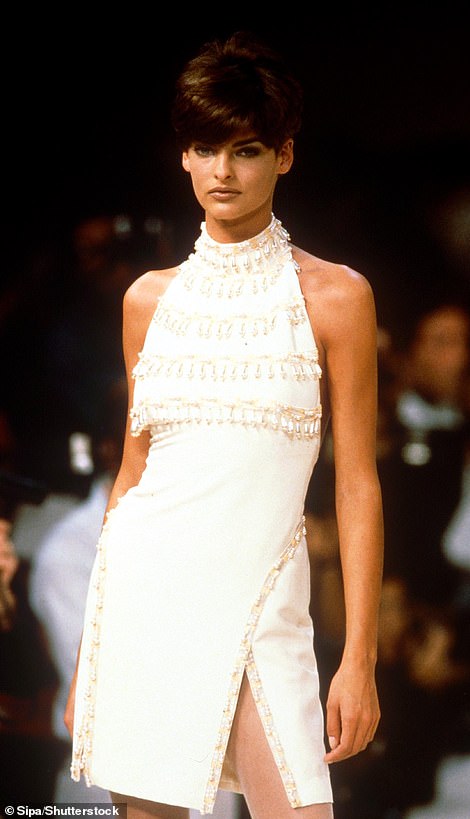 Success: One of the most famous supermodels in the world, Linda racked up over 60 magazine covers during her hugely successful career (pictured left in 1991 and right in 1990)

‘PAH has not only destroyed my livelihood, it has sent me into a cycle of deep depression, profound sadness, and the lowest depths of self-loathing.

‘In the process, I have become a recluse. With this lawsuit, I am moving forward to rid myself of my shame, and going public with my story.

‘I’m so tired of living this way. I would like to walk out my door with my head held high, despite not looking like myself any longer.’

Speaking to People magazine in an interview months later, the former runway star detailed how she thought she was going crazy and ‘stopped eating’ when growths started to appear on her chin, thighs, and bust area – and how she now ‘dreads running into someone she knows’ after spending decades as a catwalk sensation.

However, at the time, she said she was ‘done hiding’, telling the outlet: ‘I can’t live like this anymore, in hiding and shame. I just couldn’t live in this pain any longer. I’m willing to finally speak.’

She detailed how within three months, she noticed bulges forming on her body, with the targeted areas growing rather than shrinking – before hardening and becoming numb as she experienced a rare side effect of the procedure. 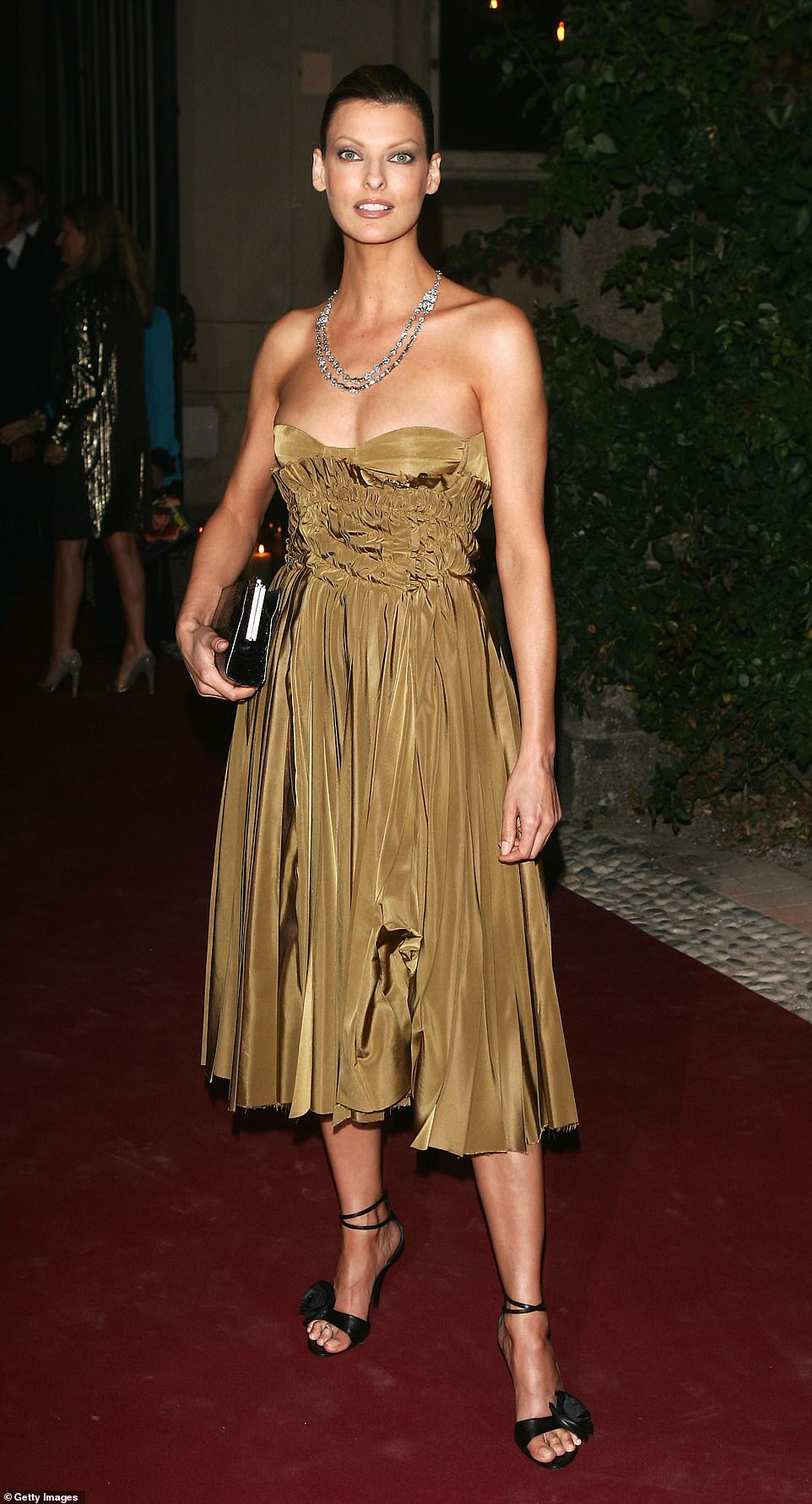 Health: Linda said she had developed paradoxical adipose hyperplasia (PAH), a ‘very rare but serious side effect’ of the fat-freezing procedure’ (pictured in 2005)

The star alleged that CoolSculpting offered to pay for liposuction for her to correct the damage caused by PAH after her doctor contacted them. However, she said that on the eve of her liposuction, Zeltiq said they would only pay for the procedure if she signed a confidentiality agreement – which she refused.

In June 2016, Linda underwent a full body liposuction procedure, which she claims she paid for. She then underwent liposuction again in July 2017, and it’s unclear who covered the cost.

Linda said she had to wear girdles, a chin strap, and compression garments for eight weeks after the liposuction to prevent the PAH coming back – but said the condition did return after her second liposuction.

The model told the outlet that she can no longer bear to look at herself in the mirror as ‘it doesn’t look like her,’ explaining that her identity as ‘Linda Evangelista, supermodel’ is now ‘gone’ due to the condition.

She added: ‘If I walk without a girdle in a dress, I will have chafing to the point of almost bleeding.

‘Because it’s not like soft fat rubbing, it’s like hard fat rubbing. [I can’t] put my arms flat along my side. I don’t think designers are going to want to dress me with that sticking out of my body.’

A CoolSculpting representative told People at the time: ‘The procedure has been well studied with more than 100 scientific publications and more than 11 million treatments performed worldwide.’

They added that rare side effects such as PAH ‘continue to be well-documented in the CoolSculpting information for patients and health care providers.’

See the full feature in the September issue of British Vogue available via digital download and on newsstands from Tuesday 23rd August.

WHAT IS PARADOXICAL ADIPOSE HYPERPLASIA (PAH)?

Cryolipolysis uses cooling to damage and destroy subcutaneous fat cells, without damaging the skin to reduce the amount of fat in the treated area.

This phenomenon of PAH has a reported rate of incidence of 0.0051% of the 1.5 million CoolSculpting procedures performed worldwide. Many physicians see numerous cases in their offices.

PAH causes a gradual enlargement of the treated area. It occurs when the stimulus (the freezing of fat cells) activates a reactionary process in the fatty tissue that thickens and expands the fat cells rather than breaking them down and allowing the body to process and remove them.

PAH is only known to occur following a cryolipolysis, or CoolSculpting body contouring treatment.

PAH typically cannot be confirmed until about 6 months post-procedure, with patients complaining that they are getting bigger in the exact shape of the applicator, as depicted below.