A heartbroken Lionel Messi has declared he is retiring from international football, sending the national team into disarray.

The forward missed a penalty in the Copa America Centenario final shoot-out against Chile as his team lost their third final in three years.

Messi, who was in tears after the match, spoke after the game to Argentine television and explained his decision. 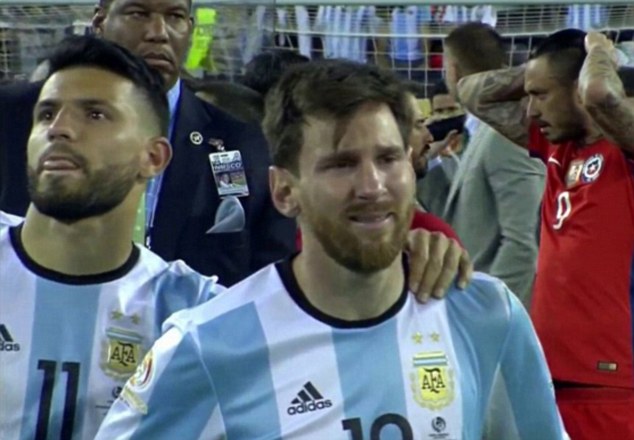 55 – Goals for Argentina. His five goals in the 2016 Copa America saw him pass Gabriel Batistuta as his nation’s all-time leading scorer.

47 – Seconds into his Argentina debut before he was sent off, against Hungary in 2005, aged 18, after coming on as a substitute.

2008 – Olympic gold in Beijing is Messi’s only major international honour.

‘That’s it. It’s over for me with the national team,’ he explained.

‘It’s not for me. That’s four finals. The decision has been made, I think so. [Winning] is what I wanted most. It didn’t come. I think that’s it. That’s how I feel now, what I think. It’s a great sadness. It hurts not to be a champion.’

Messi may yet change his mind, but for now the constant disappointment with his national side and his long-term discontent with the AFA (Argentine Football Association) have led to this reaction.

Sergio Aguero revealed that other players could be considering their futures with the side too, and Sportsmail has learned Javier Mascherano could be one of the stars who may quit.

‘Messi probably won’t be the only player to leave the national team,’ said Aguero.

‘There are various players who are considering quitting. This is the worst I’ve seen the dressing room. Worse than after the other two finals [the 2014 World Cup and 2015 Copa America].’

In 2007 Messi first tasted defeat in a final with Argentina, losing 3-0 to Brazil in the Copa America.

That was followed by disappointment against Germany in 2014, plus defeats to Chile two years running in the Copa America again. 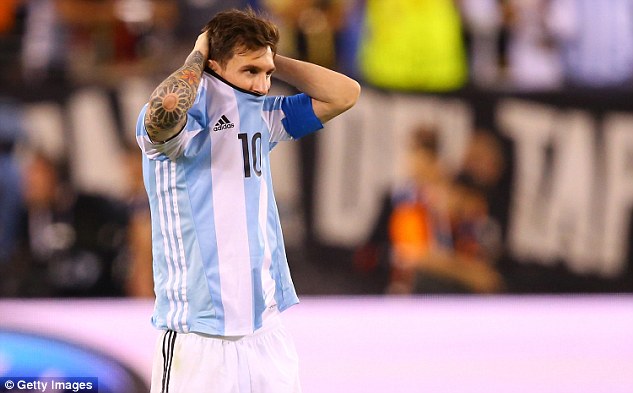 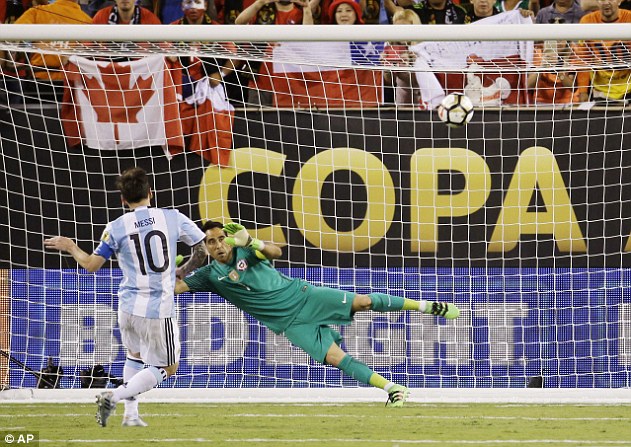 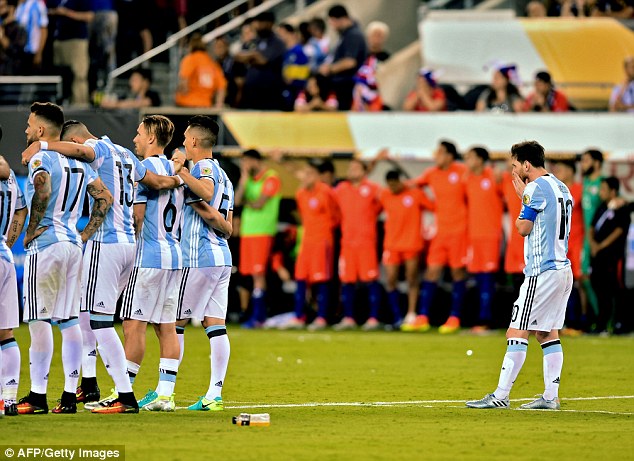 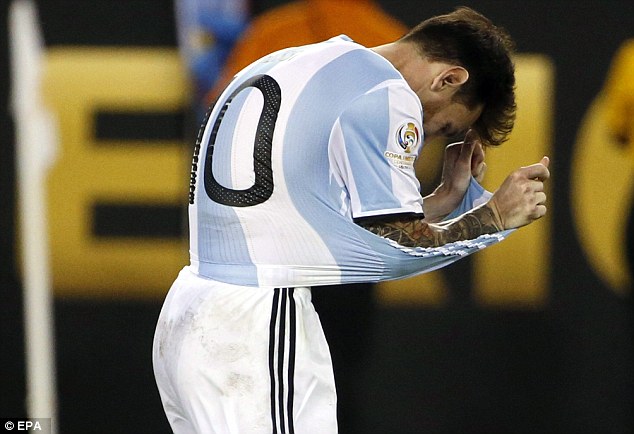 Messi reacts after he missed his penalty, blazing his shot over the crossbar against Chile

Messi posted on Instagram on Wednesda,y because of a delay to Argentina’s flight to New Jersey from Houston, writing: ‘What a disaster the AFA is.’

He later pledged to go into greater detail about his grievances after the tournament.

On Friday FIFA announced they have taken control of the AFA and are electing an emergency panel to manage its affairs, after president Luis Segura was charged with fraud on Thursday.

Some of Messi’s team-mates were shocked by his decision to quit the national team.

‘I think Messi spoke in the heat of the moment because such a great opportunity escaped us,’ said Manchester United goalkeeper Sergio Romero. 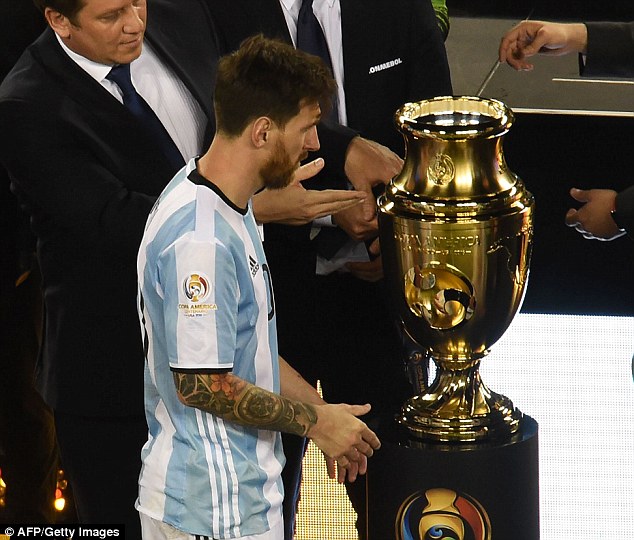 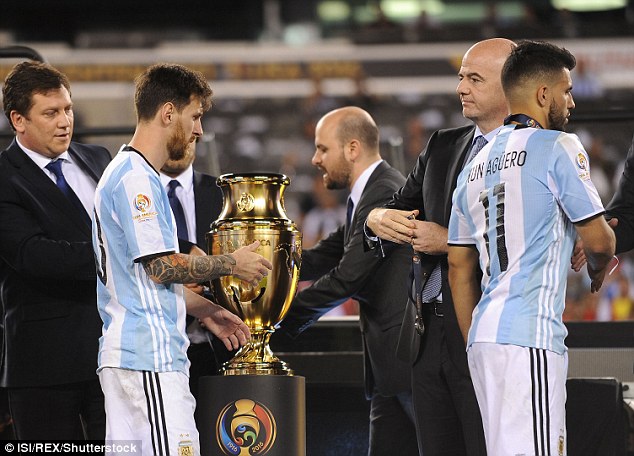 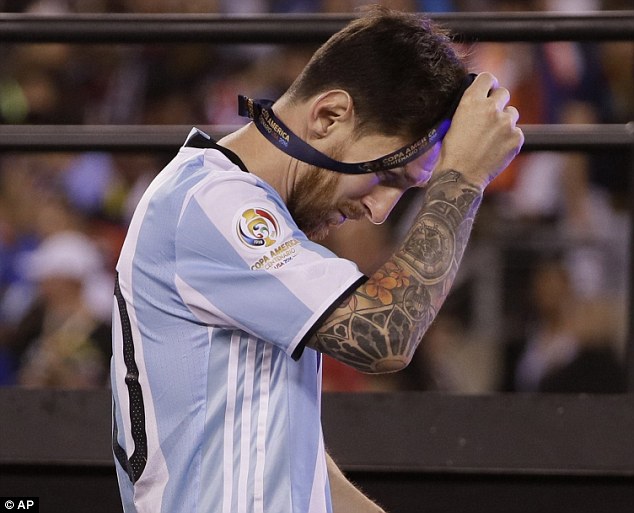 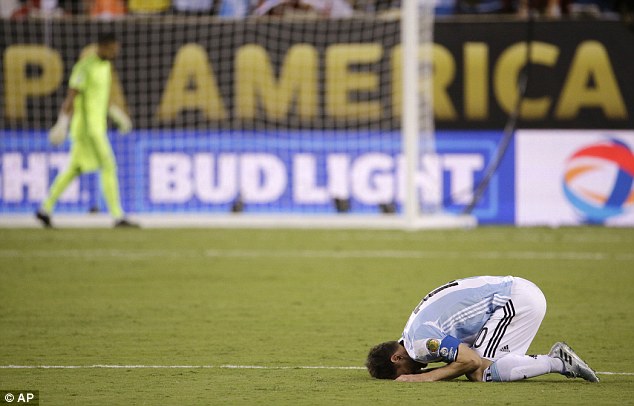 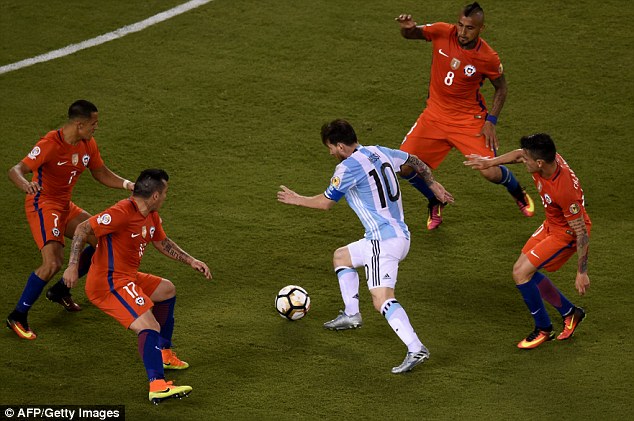 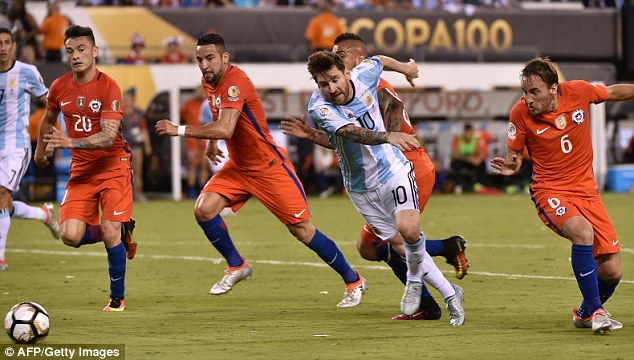 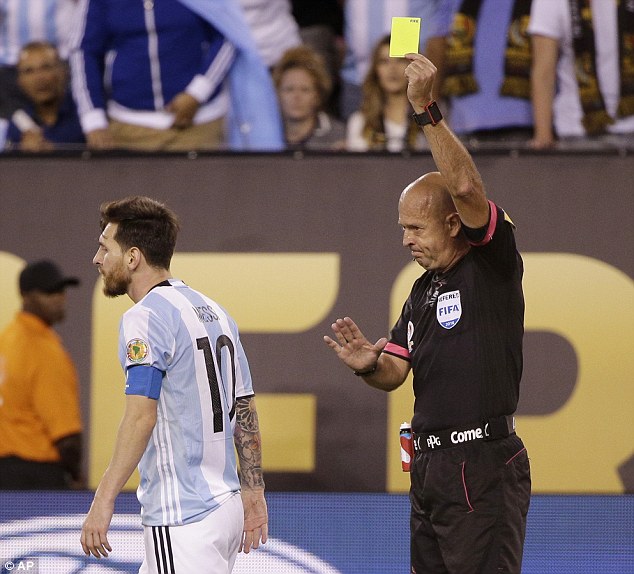 Aguero added: ‘I don’t know what the other players think but what I saw today in the dressing room I have never seen before.’

Messi was crushed by the defeat, sitting on the substitutes bench for several minutes after Lucas Biglia missed his spot-kick and Francisco Silva sealed the victory for Chile, 4-2 on penalties after a 0-0 draw over 120 minutes.

Romero collected the fair play award that Argentina won for the tournament, although as captain it theoretically should have been Messi, but he had other matters on his mind. 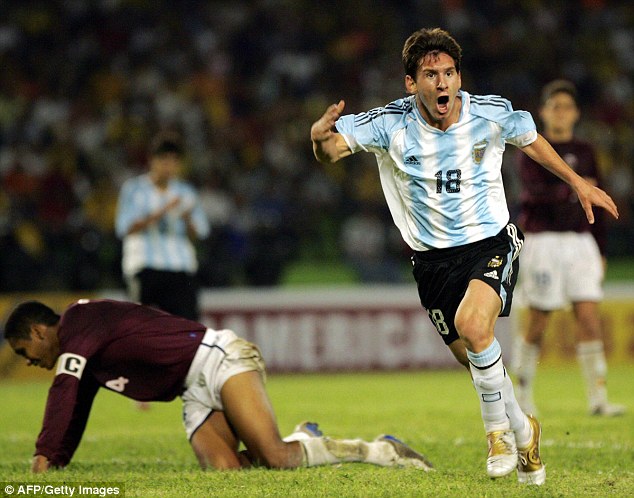 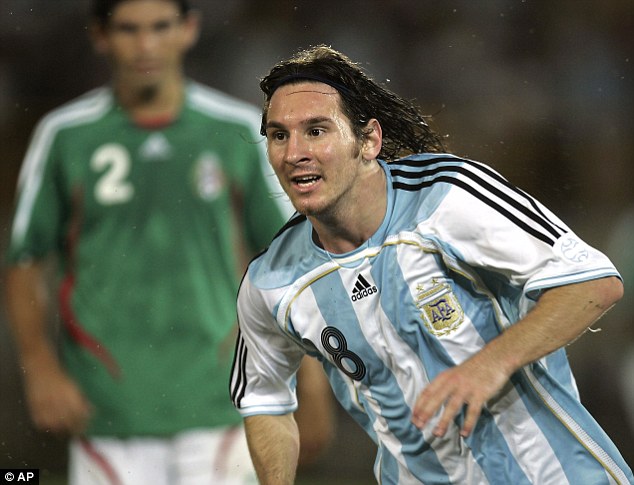 Messi reached the final of the 2007 Copa América, where he was named young player of the tournament 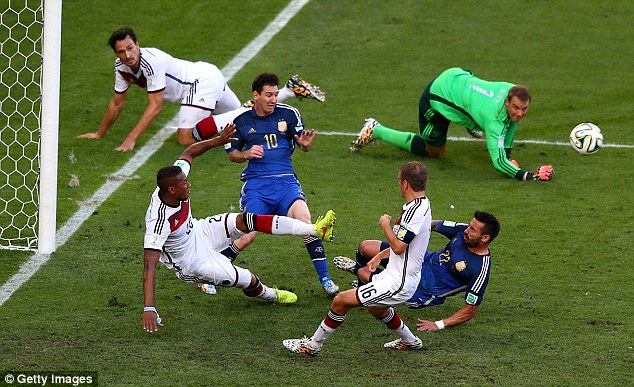