Little Mix put on a jaw-dropping display when they were pictured arriving at BBC Radio One’s Live Lounge studios on Tuesday.

She was closely followed by Perrie Edwards, 27, who channelled the Spice Girls in the 90s, in her white knee high boots. Perrie flicked the V-sign wearing a crisp white shirt tucked into a nude high-waisted mini skirt. 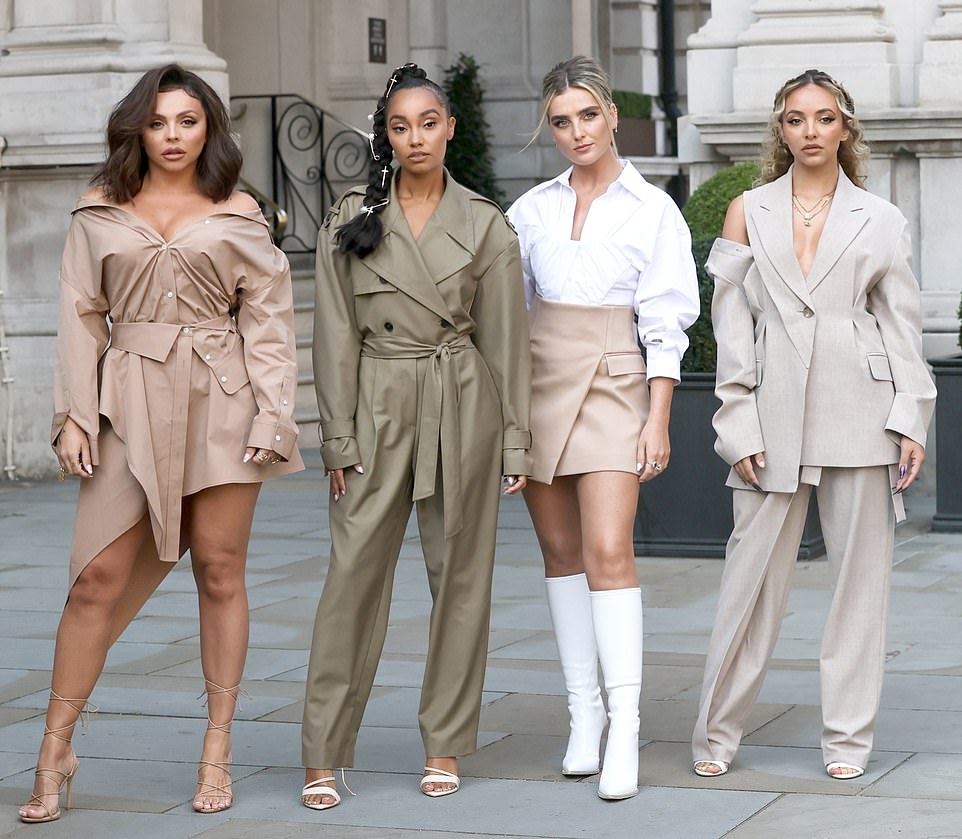 Also looking incredible on the day was Leigh-Anne Pinnock, 28,  who wore an oversized khaki jumpsuit which belted in at the waist.

Her hair was styled into a high braid which was decorated with silver embellishments throughout.

Last but not least was Jade Thirlwall, 27, who wore an edgy androgynous suit which had a plunging neckline and a cut-out section on one shoulder. 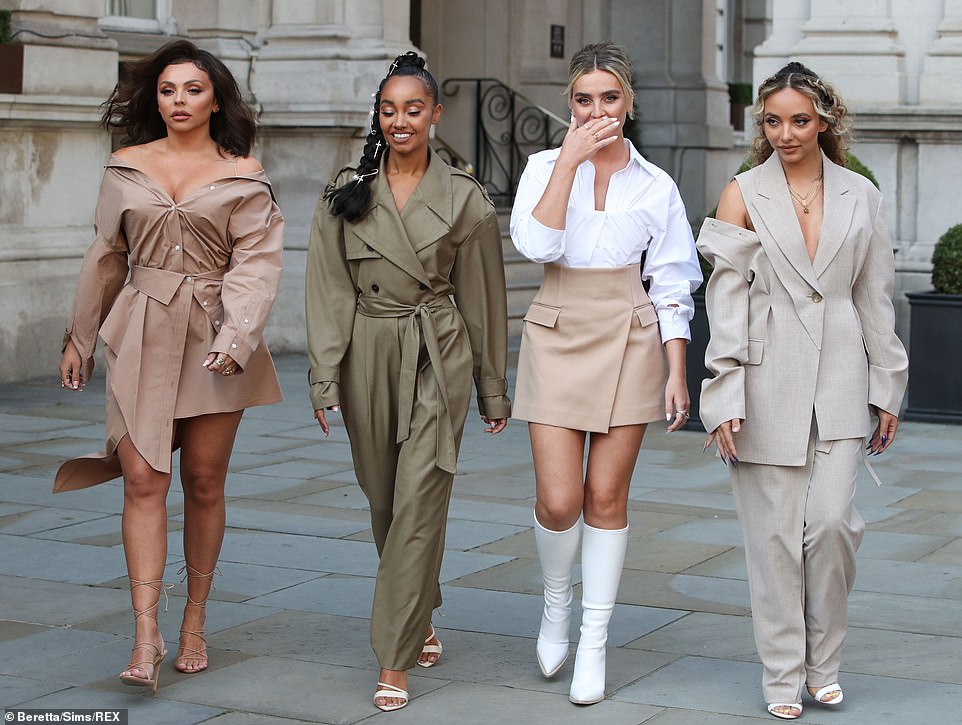 Funny: The girls seemed to get the giggles as they walked out in formation 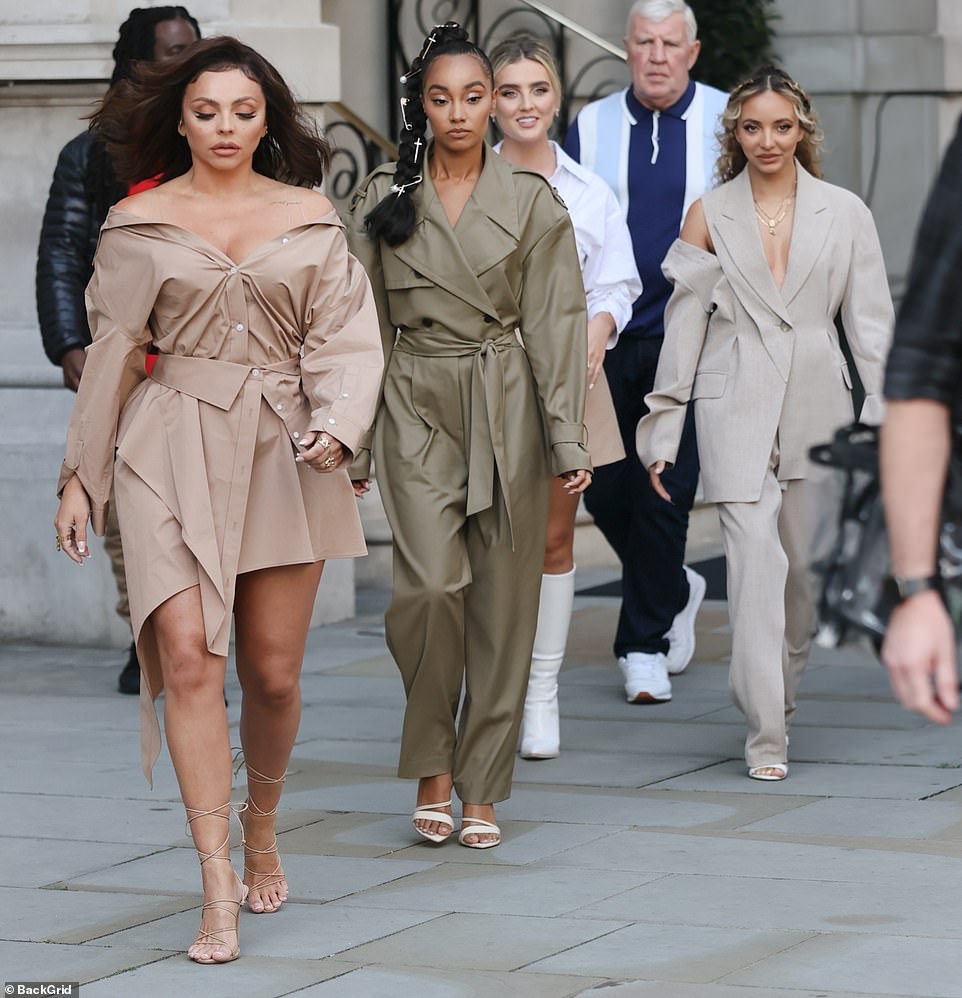 Busy time: The girls are currently promoting their latest summer anthem, Holiday and are also joining forces to find the nation’s next big group 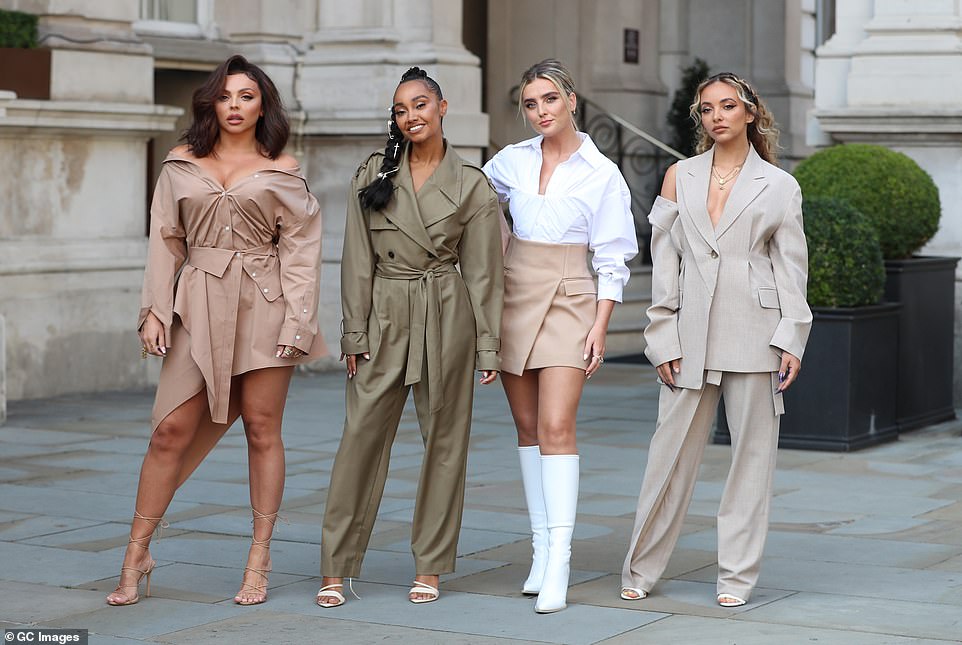 Perrie then adds: ‘Yes! To support us on tour!’ before Jesy responds: ‘And take over the world!!!’

The girls are currently promoting their latest summer anthem, Holiday and are also joining forces to find the nation’s next big group.

In the trailer – which is dubbed to the band’s hit single Power – Leigh-Anne sends the text to her bandmates suggesting: ‘Let’s find an amazing band!’

Perrie then adds: ‘Yes! To support us on tour!’ before Jesy responds: ‘And take over the world!!!’

Jade then texts: ‘YASS let’s do it!’ before the trailer cuts to a montage of Little Mix’s most iconic stage moments.

Chic: Also looking incredible on the day was Leigh-Anne Pinnock, 28, who wore an oversized khaki jumpsuit which belted in at the waist. 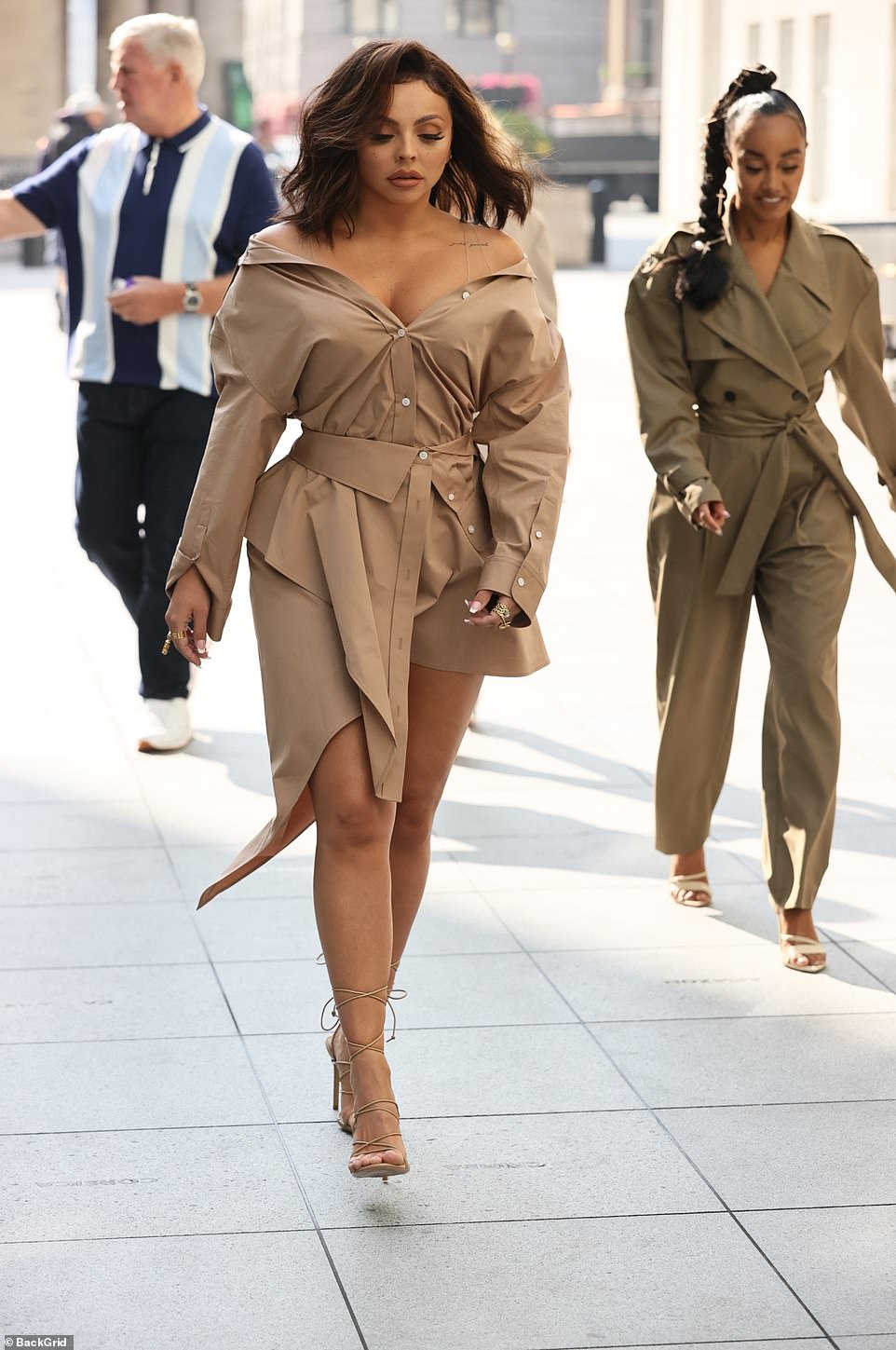 Golden girl: Jesy was sporting a stunning tan as she tottered along in nude strappy heels

The series will air on BBC One and iPlayer later this month, and will be hosted by comedian Chris Ramsey.

Little Mix: The Search was originally scheduled to air in the spring, but has been delayed by the COVID-19 pandemic.

Discussing how it’s going the behind-the-scenes, Jade said: ‘It’s been really interesting, because we’ve had to learn to do that ourselves, in terms of getting along and seeing the bigger picture, it’s making groups and seeing the energy. 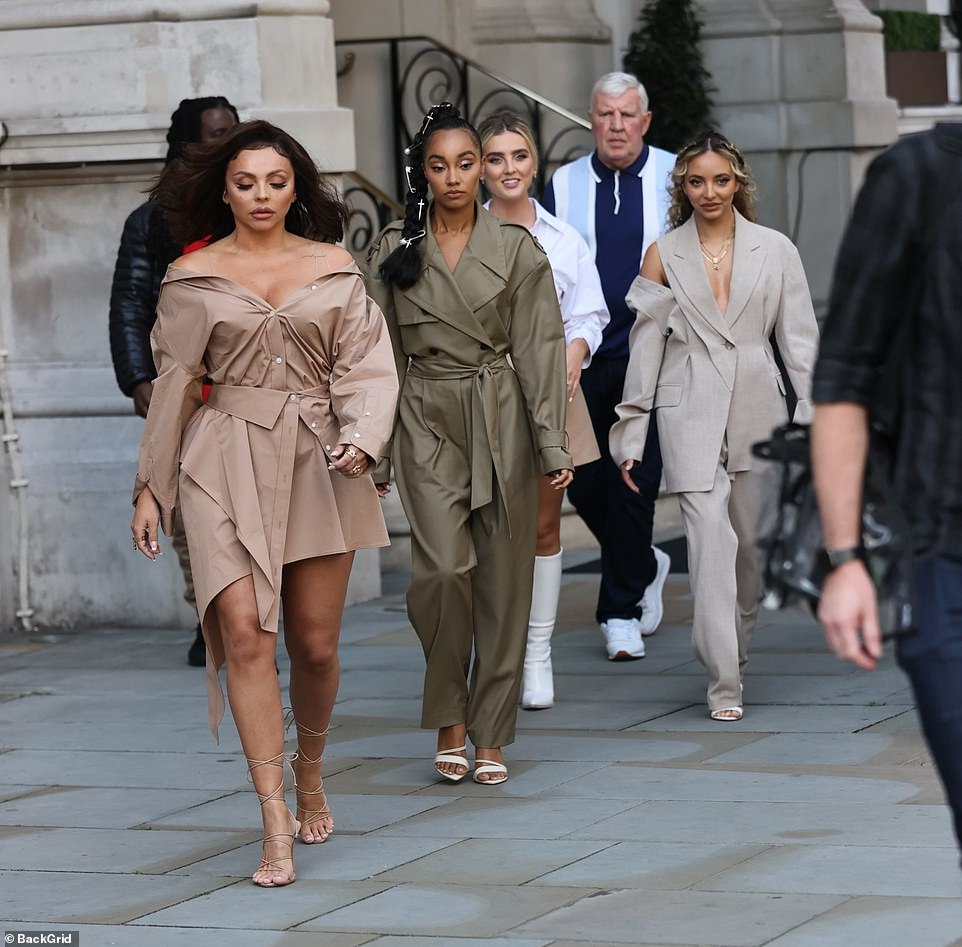 Not happy? It took a while for the girls to raise a smile when they left the studios 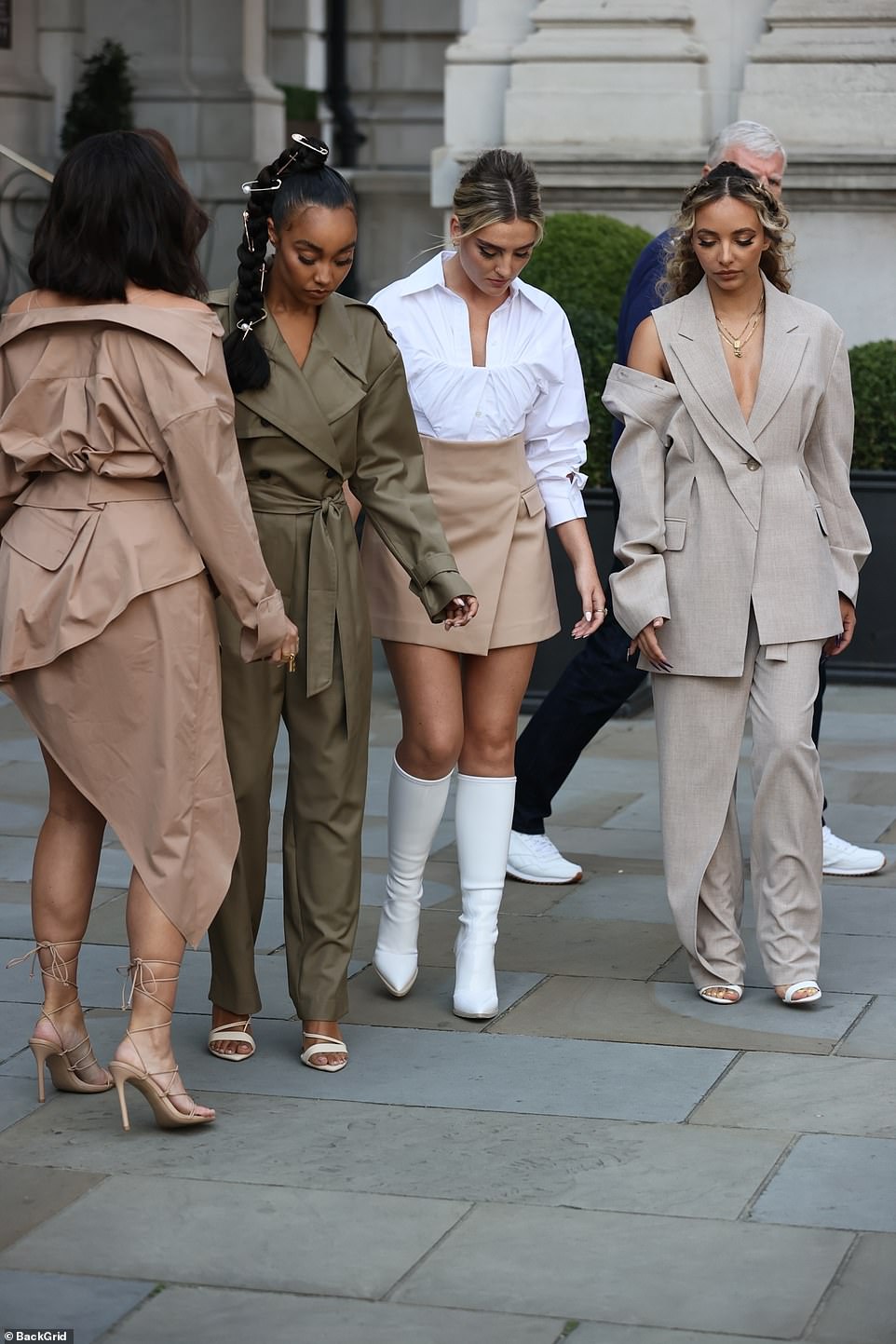 Getting together: They looked down for a moment, before getting into position

‘It’s quite hard getting the groups to gel.’

The singer also admitted that she wasn’t expecting her groups to click like she did with her Little Mix bandmates, when they were formed on the X Factor in 2011.

She continued: ‘We’re not naive enough to think that’s going to happen with another group we put together, we really need to get it right and look out for them and help them all.’ 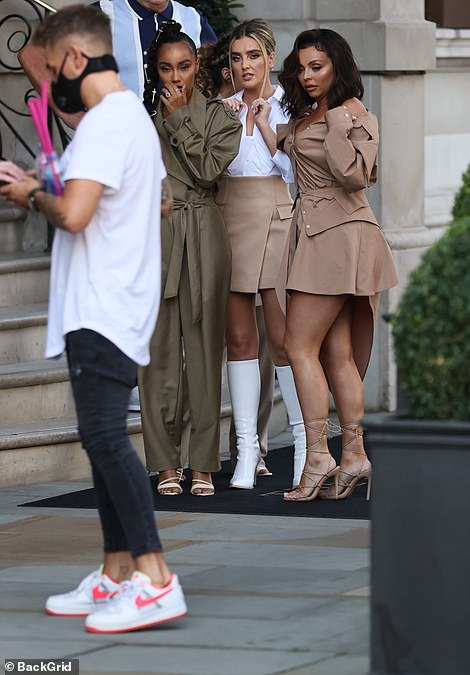 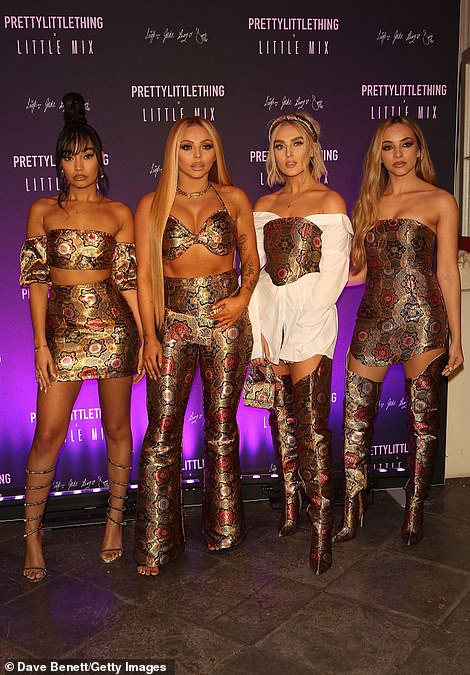 Taken aback: They stood back and watched their make-up artist on the street for a second, but it was unclear what he was doing 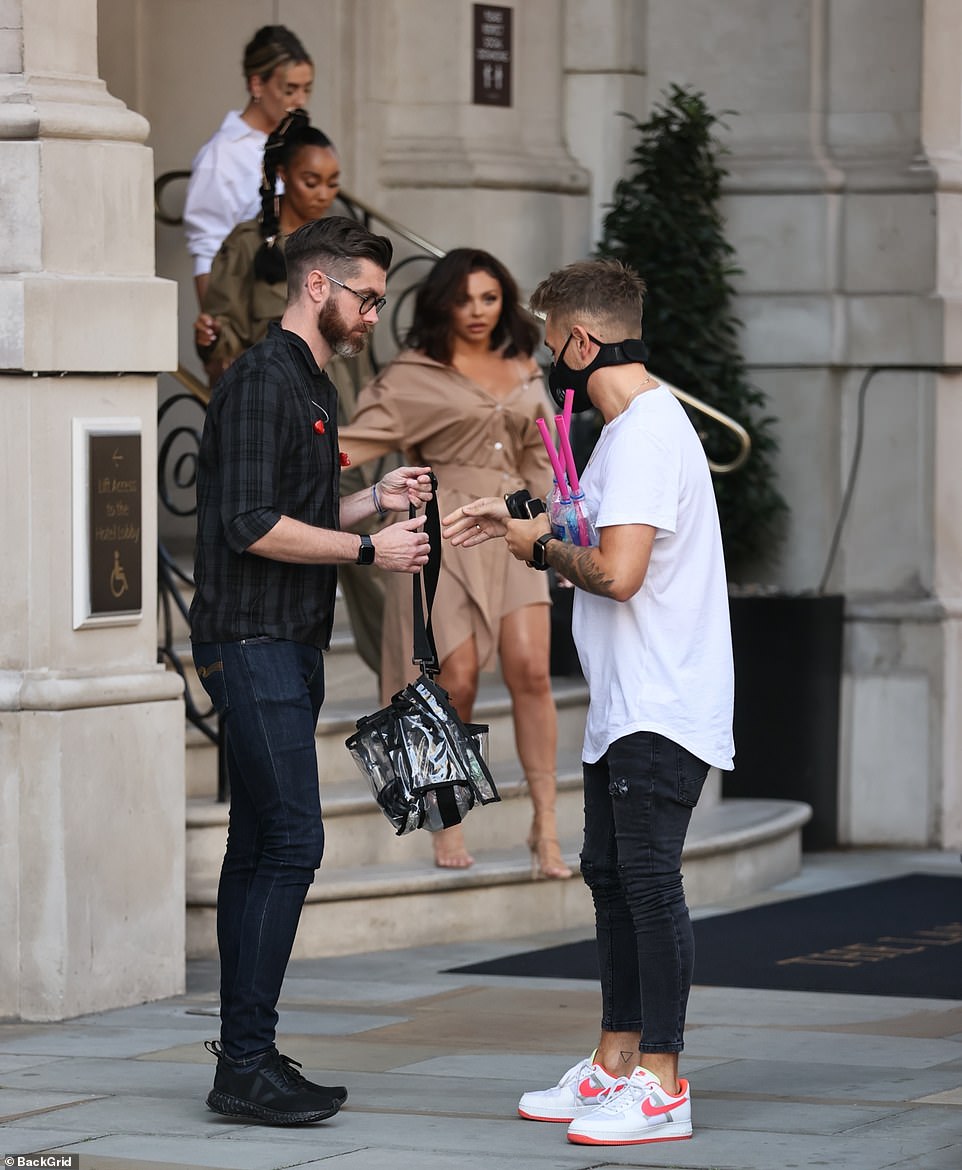 Glam squad: They had their trusty hair and make-up team with them on the day