Four teenage boys have been charged over a homophobic attack against two women on a London night bus, police said.

The boys, aged between 15 and 17, face counts of aggravated hate crime for the incident on May 30, the Metropolitan Police said.

Melania Geymonat, 28, and her American partner Chris, 29, were travelling to Camden Town when the they were assaulted.

The pair were left bloodied and bruised after allegedly being punched and robbed following an evening out in West Hampstead, north west London.

The couple were left covered in blood after the attack by a group of young men in West Hampstead, north west London

The group allegedly began harassing the two women when they discovered they were a couple, asking them to kiss while making sexual gestures.

Describing the alleged incident, Chris said some young men saw they were a couple as they were holding hands.

She told BBC London last month: ‘They got up out of their seats and walked over to where we were and started very aggressively harassing us.

‘One of them stayed a couple of rows behind and was throwing coins at us. 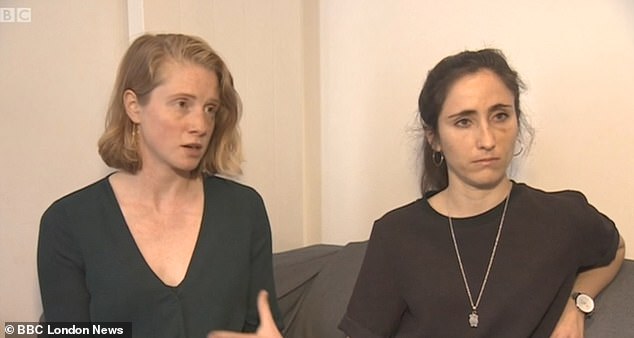 ‘I did not engage with him at all. Initially Melania was trying to deescalate the situation. She was being friendly but trying to keep them at bay.’

Two of the boys are aged 16, one is 15 and another is aged 17, have been charged with an aggravated hate crime under the Public Order Act, Scotland Yard said today.

One of the 16-year-olds, from Wandsworth, south London, is also charged with theft and handling stolen goods.

Another, from Kensington and Chelsea, west London, is also accused of possessing cannabis.

All four defendants will appear at Highbury Corner Youth Court on August 21.