Lorraine on her worst guest, why she’d never do I’m A Celeb and what she thinks of Harry and Meghan

She’s the queen of daytime telly, but Lorraine Kelly has another royal on her mind today. ‘I do worry about Harry. I feel sorry for him. I just think, sometimes you can have too much therapy,’ says the veteran Scottish presenter, moments after another live episode of her daily talk show Lorraine. ‘I think he’s lost touch with himself a wee bit.’

Around 1.2 million people watch Lorraine for a daily dose of fun and fashion, Hollywood gossip and current affairs, heart-rending human interest stories and campaigns, all delivered with wit and common sense by one of the country’s most trusted broadcasters, who says she has felt more and more confident of late.

‘I can say my piece. I’ve been doing this so long I feel I’ve kind of earned the right to do that,’ says Lorraine, who helped launch GMTV 30 years ago and has presented her own eponymous show since 2010. Right now her viewers’ thoughts are taken up with the Duke and Duchess of Sussex and the way their Netflix series and his book Spare, which has just come out, have blown the lid off the war within the Royal Family. So should Harry and Meghan be in attendance when King Charles is crowned on 6 May?

‘We were talking about the coronation on the show and I said, “Look, if Prince Andrew is going to be there, and if some very dodgy heads of state are going to be there, then of course Harry and Meghan should be invited.” Then it’s up to them if they go. I don’t think the King should disinvite them. That would be silly, because it’s his son no matter what. All families have fall-outs,’ says Lorraine. ‘I hope they can sort it, because I think it’s very damaging for Harry. He looks like a wee damaged soul.’

There speaks a warm, compassionate journalist who has seen things that would make you weep, having made her name covering tragedies such as Lockerbie and Dunblane. She’s also a girl from the Gorbals in Glasgow and a mother who has watched her daughter Rosie carve out a place for herself in the media, so there’s a sense of weight behind her words when she says Harry and Meghan would do well to go quiet for a while and count their blessings.

‘I just hope this has all been worth it and they’ll be happy, because they’ve got two fantastic kids – happy, healthy children who look great – they’ve got this beautiful house, they love each other very much,’ she says. ‘Enough now. Get the book out of the way, then go and do wonderful things. Get on with your life.’

She knows viewers will tell her what they think. ‘I know I can say what I think and lots of people disagree with me, which is fine. People really do think they know me, which is a huge compliment. If me and my husband Steve are out at a garden centre or the pub and people come up and talk to us, I can see him going, “How do we know them?”’ She mimics Steve mouthing the words to her and laughs. ‘I’ll say, “We don’t!” And he’s like, “Thank God!”’ He’s just glad not to have offended a friend by not remembering their name. ‘They come and just chat and that’s lovely. I’m sure it’s because I’ve been there for ages.’ 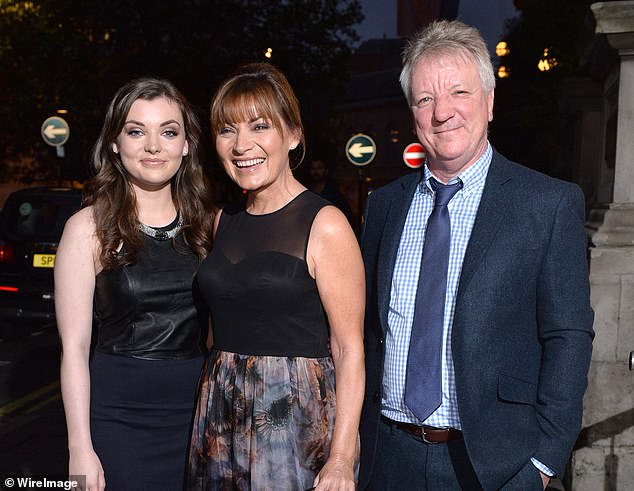 Lorraine started out as a reporter for TV-am in Scotland, but her ability to help people tell their stories even in the most difficult times inspired bosses to invite her down to London to sit on the sofa. She’s been there ever since, on Good Morning Britain, GMTV and now Lorraine.

‘We had Tyler West on after doing Strictly and he said, “I feel I know you really well, because my mum watches the show and I’ve just grown up with you there.” That really is gorgeous.’

A-listers also come on. George Clooney made her blush recently when he mischievously chose to misunderstand the Scottish word ‘wee’. ‘Hugh Jackman’s a very well brought-up boy,’ Lorraine says when asked for her favourite celebrity guest.

The opposite comes easily to mind, too. ‘The worst was Kevin Spacey. This was before the scandal,’ she says. The actor is currently facing various sexual assault charges. ‘The interview was about his series House Of Cards, which I loved. Isn’t it disappointing when you meet somebody whose work you really admire and you think, “He’s being an a***”? He didn’t want to be there. One word answers. Snapping at people. You think, “Och, don’t do that.”’

I’d be so bad on Strictly. Anton Du Beke said doing a twirl with me was like dancing with a wardrobe

Lorraine has an easy charm, but there’s a steely side to her too. ‘Piers Morgan used to say I was an iron fist in a velvet glove. I loved that.’ Politicians underestimate her at their peril. Matt Hancock, when he came on as Health Secretary during Covid, clearly thought he was in for an easy ride, until Lorraine politely took him to task about people’s loss of trust in his response to the Covid pandemic.

‘I don’t shy away from hard questions, but as my granny says, “You can get more with honey than vinegar.” All you want to do with politicians is try to get some light, get some answers out of them. Our viewers deserve that right now, with everything that’s going on.’

Matt Hancock has been asked back, but Lorraine doesn’t think he’ll come. ‘I think it was shocking he was in the jungle. Absolutely shocking.’ How about going on I’m A Celebrity herself? ‘Are you kidding me? I’d be bored stupid! You’ve not got anything to read. I’d go nuts. And you’ve got people in there who annoy you, never mind the eating of bottoms. No, thank you. I mean, why would you? It’s humiliation, isn’t it?’

Don’t expect to see her under that famous glitterball either. ‘I would never go on Strictly. You have no idea how bad I am. We had Anton Du Beke come on to the show and during the break I said to him, “Can you seriously teach anybody to dance?” He said, “Oh, you’d be fine.”

‘We did a little twirl together so he could show me how possible it was, but then he said, “Oh. It’s like dancing with a wardrobe.”’ She copies his grimace. ‘I would never do it. I’d just be terrible.’

Lorraine looks sensational in her new shots for Weekend, but insists, ‘I was never hired as a glamourpuss. When you look back, my 40s were the frumpy wilderness years. The era of the size-16 oversized cardie and elasticated waistband. Oh my God!’

Turning 50 prompted her to get fit, take up Pilates and start running marathons. Now, at 63, she wants to look her best but feels no pressure to be anything other than herself. ‘The joy of what I do here is that my editor’s a girl, the head of daytime’s a girl and the big giant head of ITV is a girl. Well, they’re all women. So I think that helps with so many things, you don’t have to explain.’

I wonder if she ever had a #MeToo moment, but Lorraine says, ‘I think I was lucky. The only time was one boss saying, “You don’t make my trousers twitch.” I remember saying, “Thank God for that.”’ She doesn’t reveal his name, but it was a long time ago. ‘Maybe it was the Glaswegian accent they were frightened of, but they never tried anything.’

They would also have had her husband to deal with. Lorraine met Steve Smith, a cameraman, in 1984. They worked together for a year before Lorraine took matters into her own hands. ‘I thought, “He’s never going to do anything about this.” We went to Glencoe to do a story and we had one or two slammers [tequila and soda shots you bang on the counter], then I jumped on him like a ninja.’

They married in 1992 and Steve has been by her side ever since. ‘I could not function without him,’ says Lorraine. ‘He is funny, organised and allows me to do the things I need to do. He also cooks. He’s a good man.’

Rosie, their only child, was born in 1994. ‘I’d have loved more, but it never happened. By the time we realised, it was too late to go down the road of IVF. I also had this thing of, “I’m so blessed to have a kid who’s healthy and funny and happy and doing great and a delight.” I won the prize and didn’t want to push my luck.

‘She organised a surprise party for our 30th wedding anniversary. She packed us off on an overnight stay, then when we came back my brother was there from Singapore with his girlfriend, my best friend from Spain with her husband, all my friends and a ceilidh band and a disc jockey. Unbelievable. I was like, “How did you do this without me knowing or anybody spilling the beans?”’

Rosie studied journalism, then worked in Singapore for a few years. Now 28, she works for Hello! magazine, which has featured Lorraine’s riverside home in Buckinghamshire. Lorraine is said to be worth around £5 million, but as equal pay is such an issue in television, is she sure she’s being paid as a man would?

‘I don’t know what anybody else gets. I’m very happy, thank you very much, but I don’t think there’s a fella in my position. So I don’t think that really applies to me.’

She knows money is much tighter for most of those who watch her show. ‘This next year will be all about helping people. Things are going to be tough, so we’ll be lending a helping hand when we can, whether through me or our experts, like Dr Hilary Jones. There’ll also be fun. That’s very important.’

So Lorraine will keep popping up every morning, asking tricky questions, tackling tough subjects, laughing and flirting with celebrity guests and helping people say what they want to say. ‘I think everybody’s got a right to get their story told and I feel very lucky that they trust me with it.’

‘Do not believe this utter b******s!’ Furious Lorraine Kelly says she is taking legal advice over fake claims she lost 1st in six weeks with a new diet

‘I’d been comfort-eating!’ Lorraine Kelly admits she became ‘very unhappy’ after gaining 1.5 stone in lockdown… but has since dropped TWO dress sizes

‘Christmas is reasonably quiet’: Lorraine Kelly says she is grateful she doesn’t feel the ‘pressure’ to see her relatives over the festive period