A 14-year-old black boy was shot by a Louisiana deputy as he allegedly lay unarmed on the ground complying with officers – but officials didn’t tell his mother and didn’t report the incident until more three months later.

On March 20 Tre’mall McGee was riding in a car with friends in Westwego, unaware that the vehicle was stolen, when deputies pulled the car over and the teens fled on foot.

Several deputies caught up with McGee and he stopped and complied with their orders to lie on the ground.

But as he was on the ground McGee, who was unarmed, said he felt a gunshot hit his back near his left shoulder.

However, Jefferson Parish authorities didn’t disclose the officer-involved shooting until late June after a local outlet reported on it amid George Floyd protests decrying police brutality.

Now the sheriff’s office is facing scrutiny for its checkered past and use of excessive force against people of color.

On March 20 14-year-old Tre’mall McGee was shot in the shoulder by a deputy with the Jefferson Parish Sheriff’s Office. He had been with friends riding in a car, unaware it was stolen, that was pulled over by police. Officials with the department didn’t report the incident until more than three months later 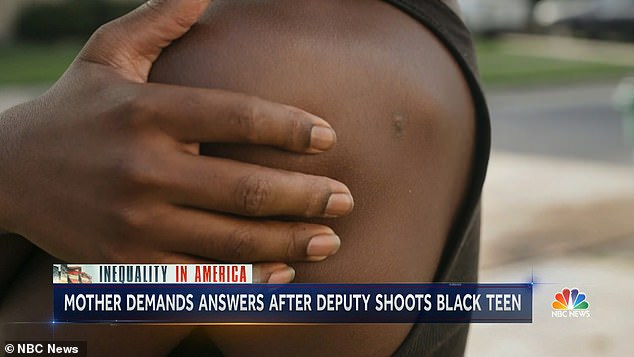 McGee said he was lying on the ground trying to comply with officers when ‘Next thing you know, I got shot.’ His scar in his left shoulder pictured above 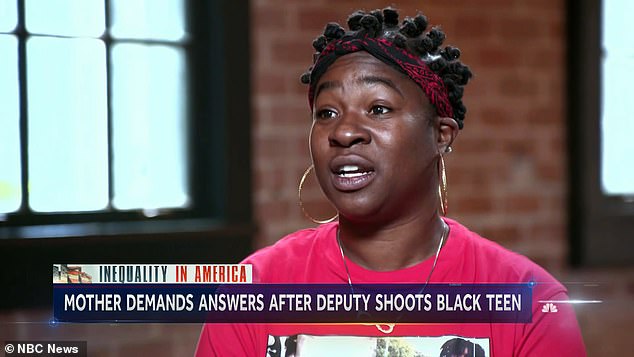 For months mother Tiffany McGee has been seeking answers. She wants to know who shot her son, who else was at the scene, and if there will be any accountability. She says: ‘I’m fighting just to get you to be accountable for what you did. Just take responsibility. That’s all I want you to do’

The day of the shooting Tre’mall’s frantic mother Tiffany McGee said she got a phone call saying he had been shot and was at the hospital. Once there a doctor told her Tre’mall was alive but she could not see her son.

‘No one said anything. No one spoke up to say an officer shot my child,’ McGee said to NBC News.

In the Jefferson Parish Sheriff Office’s initial report on the incident, deputies described the pursuit of a stolen car and the search for teens riding in it, but it failed to document the deputy-involved shooting and the fact that a minor was taken to a hospital.

To this day Tiffany McGee still does not know the name of the deputy who shot her son, the identities of other officers at the scene, why no one told her what happened that night and most importantly – if anyone will be held accountable.

‘I’m fighting just to get you to be accountable for what you did. Just take responsibility. That’s all I want you to do,’ she said. 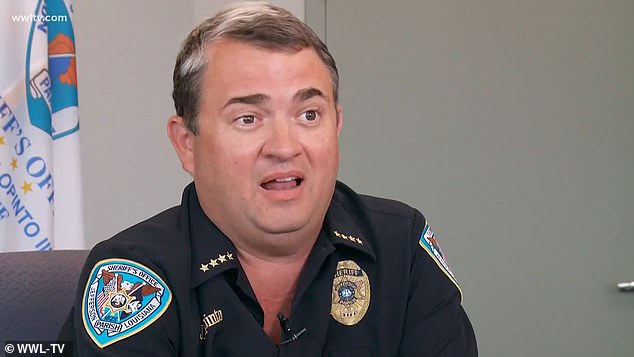 Sheriff Joe Lopinto (above) has remained tightlipped about the incident, saying the state’s child privacy laws prevent his office from commenting on cases involving juveniles 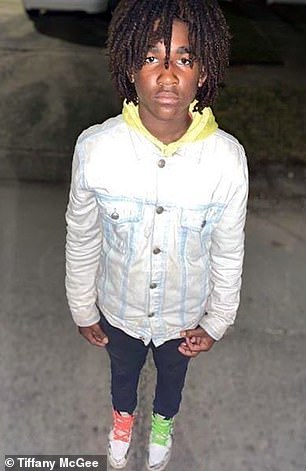 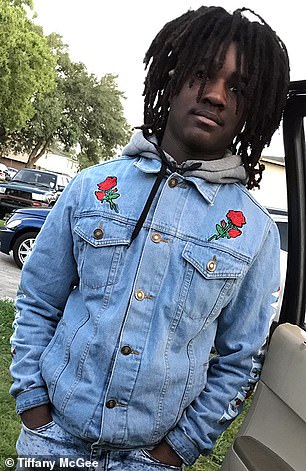 Tre’mall has his own questions he’s demanding answers to after healing from his shoulder injury. ‘Why’d you shoot me, sir? What’s the point,’ Tre’mall, who has no criminal record, said

Tre’mall has his own questions he’s demanding answers to after healing from his shoulder injury.

‘Why’d you shoot me, sir? What’s the point,’ Tre’mall, who has no criminal record, said.

Speaking on the incident when cops pulled over the vehicle, ‘Everybody started running. So I ran’. He and a friend hopped a fence into a backyard of a small home and his friend hid under a shed.

Tre’mall tried to crawl under the shed when officers arrived.

He remembers a deputy telling him to stop moving as he was on the ground and another to put his hands on his head. When he complied, ‘Next thing you know, I got shot.’

He feared he’d lose his arm.

Tiffany McGee only found out he was shot by a deputy when she traced his phone to the Westwego Police Department using the locator app Life360.

There McGee asked an officer what happened to her son and she was told a Jefferson Parish deputy fired the gun that killed him.

The next day she picked him up from the juvenile lock up and asked ‘Who shot you?’ 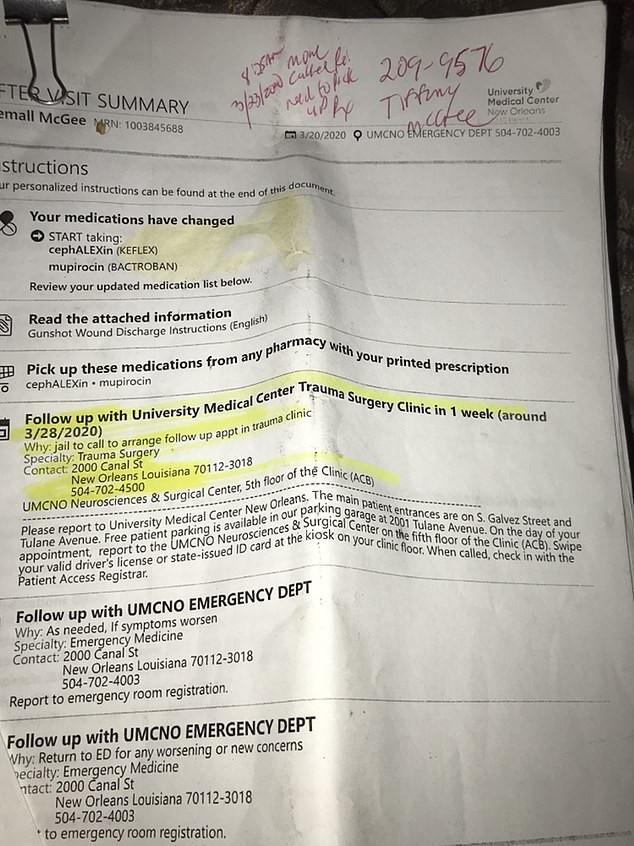 It was a moment of despair for McGee.

‘I hate those moments of feeling helpless with my children,’ she said. ‘I’m supposed to be their superwoman.’

Tre’mall’s shooting came amid the coronavirus pandemic and the day after he was released Gov. John Bel Edwards issued a stay-at-home order.

Tre’mall’s shooting has sparked outrage in the parish, especially as George Floyd protests decrying police brutality unfold across the country.

Critics of the sheriff’s office say it lacks transparency, as embodied in Tre’mall’s case, especially when it comes to excessive force against black residents.

‘I thought we had honestly. This 14-year-old boy that they kept hidden, it’s very telling,’ Gaylor Spiller, the head of the parish’s NAACP chapter said.

While states typically bar officials from naming children arrested and charged with nonviolent crimes, law enforcement across the state routinely share details of cases without naming them. This is also practiced in other states including New York, California and Ohio.

Furthermore, the Jefferson Parish Sheriff’s office is one of the state’s best and largest resourced offices boasting its own crime lab, helicopter and BearCat armored tanks used in protests – but they’ve refused to adopt bodycameras.

Use of force by the sheriff’s office has been a concern in the majority-white parish for its checkered history.

At least 12 men and boys have died during an arrest or pursuit by the Jefferson Parish Sheriff’s Office since 2015. All were black or Latino and three were under the age of 18, as per NBC. 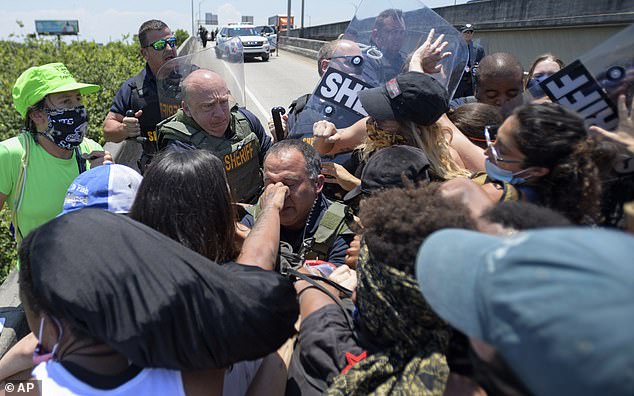 Now the Jefferson Parish Sheriff’s Department is facing heat for their checkered history and use of aggressive force against communities of color.  At least 12 men and boys have died during an arrest or pursuit by the Jefferson Parish Sheriff’s Office since 2015. All were black or Latino and three were under the age of 18. A deputy with the department is poked in the face by protesters on June 16 during a protest against police brutality 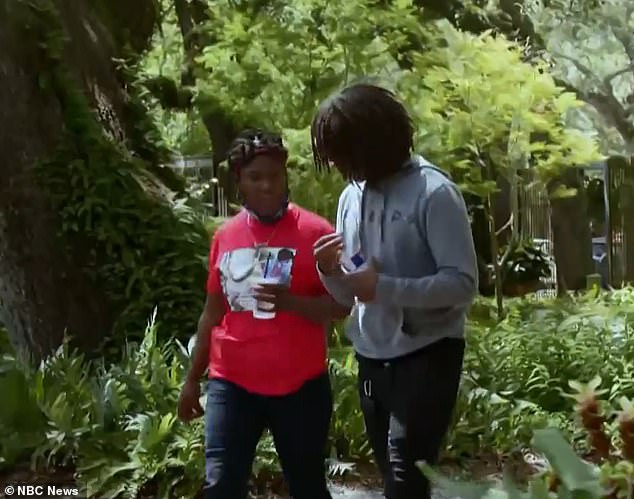 Tre’mall pictured walking with his mom Tiffany. His prosecution is on hold and his lawyers say the district attorney is taking another look at the charges

For months McGee made calls trying to piece together what happened and who shot her child, but found no answers or cooperation with the department. Months later Tre’mall was charged with ‘resisting by flight’.

‘Before, you all didn’t know nothing about the shooting. Now you guys want to try to charge him?’ McGee said, incredulous with the charge.

In a press conference on June 23 Sheriff Lopinto touched on Tre’mall’s case after an article about it came out in Youth Today.

He admitted an email should have gone out and all deputy-involved shootings would be announced going forward.

‘There’s nothing that was hidden. It wasn’t something that was on my mind back then,’ he said, adding he didn’t know if media had reported on the story or not.

He said his office is investigating the incident.

For Tre’mall it’s not clear what comes next for him in the legal system.

His prosecution is on hold and his lawyers say the district attorney is taking another look at the charges.

His mother says fragments of the bullet shot into his arm are still lodged in his body.