Lucas Browne was rushed to hospital in the wake of his chilling knockout at the hands of Dillian Whyte on Saturday – but the Australian is not thought to be seriously hurt.

There was major concern in the minutes after the previously-undefeated Browne was laid out by a huge left hook in the sixth round at the O2 Arena.

He required immediate medical attention and left the ring wearing an oxygen mask before being taken from the arena on a stretcher.

The Australian has since been taken to a nearby hospital but was said to be okay despite the nasty knockout.

In the ring after the fight, Whyte send good wishes to his opponent, telling Sky Sports: ‘Hopefully Lucas Browne’s okay, he showed up to fight and tried but I knew that would happen’.

Despite coming into the ring on the back of 25 consecutive victories, Browne was outclassed from the first bell. He was cut badly in the second round and by the end of the fifth his face was covered in blood. 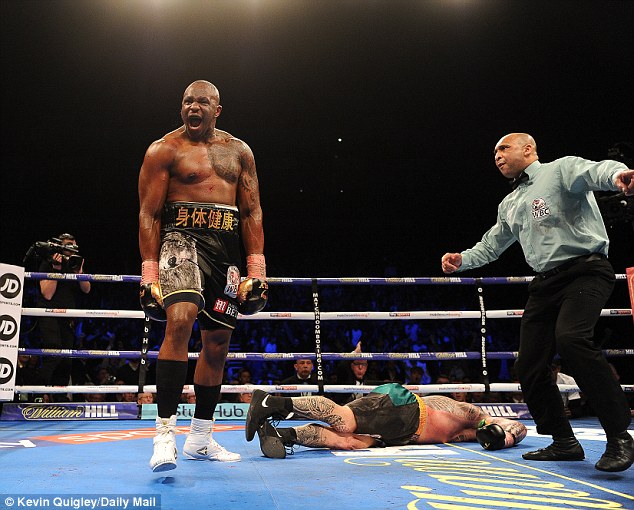 He was then laid out in chilling fashion by Whyte, who called out both Deontay Wilder and Anthony Joshua after his latest victory.

‘I would like to fight Anthony Joshua another three, four, five times in my career. Me and him have chemistry, we bring a lot out of each other. These are big fights, but if me and him step into the ring, something sparks. It’s like we are two lifetime lovers.’