Former NASA engineer Mark Rober made waves on the world-wide-web last year when he designed a revenge bait package (or Glitter Bomb Trap) to record would-be thieves stealing deliveries off of home porches.

After ten months of tinkering and modifications, Rober is back with a new and improved device and video, with the help of his assistant/friend Sean and Culkin himself. 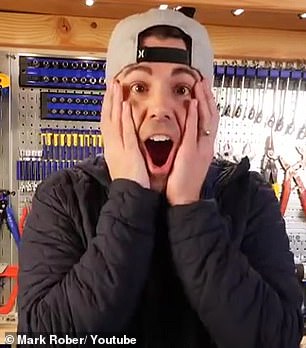 The new video begins with footage of one of the culprits getting a taste of the device’s flying glitter and disgusting fart spray that were firmly placed inside the package along with a circuit board, four video phones and GPS.

Rober then explains that he got idea of a revenge bait package after his home security camera captured someone stealing a delivery off his porch 18-months ago.  He went to the police with the footage but, according to Rober, they said it simply wasn’t worth the time to follow up.

It’s at this point that Culkin opens the door of Rober’s garage and makes his grand arrival, which leads to the engineer doing his best Kevin McCallister impersonation, of his hands on his face, made famous in the Home Alone movies. 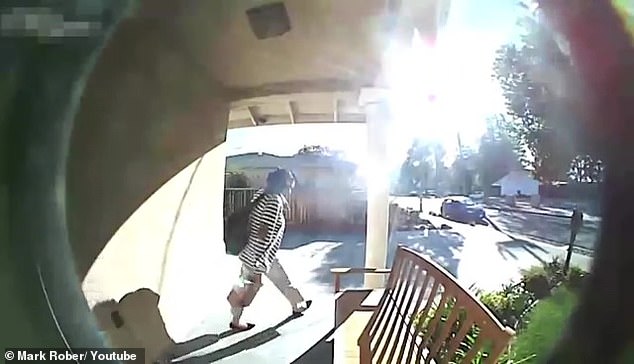 The seed: Rober got idea of a revenge bait package after his home security camera captured someone stealing a delivery off his porch 18-months ago 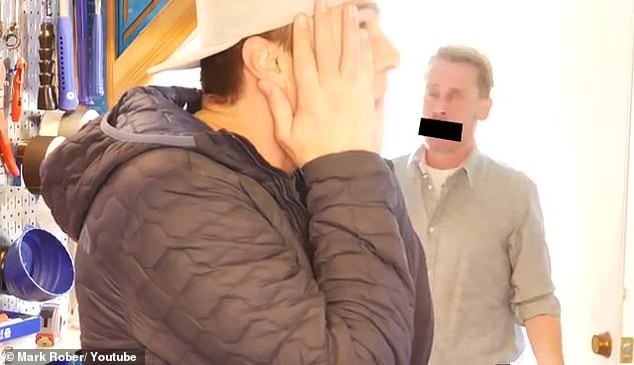 Legendary: : Culkin, 39, appeared in the new video, in -part, because his Home Alone character Kevin McCallister was the inspiration for Rober’s invention 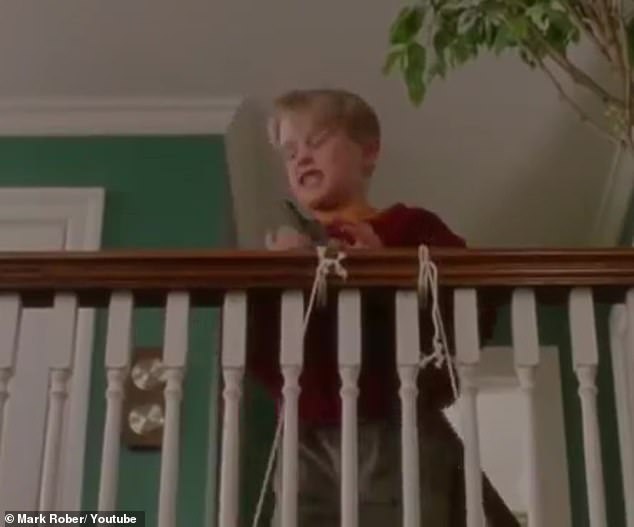 Iconic: Culkin’s character in Home Alone was the king of make-shift inventions

The new Glitter Bomb version has many of the same features as its predecessor but this go-around it’s dressed up to look like a pair of high-end Bose headphones.

Rober also added smellier fart spray that shoots out five sprays every 30 seconds until the thief throw the package away. Culkin was one of the 10 volunteers that did a test run to confirm that it was in fact more disgusting than the previous model.

And Culkin and the rest all agreed it was much worse.

There’s also a healthy dose of biodegradable glitter put in a round motor at the top of the device that shoots it out of the box, all over the thief. That will increase the chances that Rober will be able to retrieve the device once discarded. 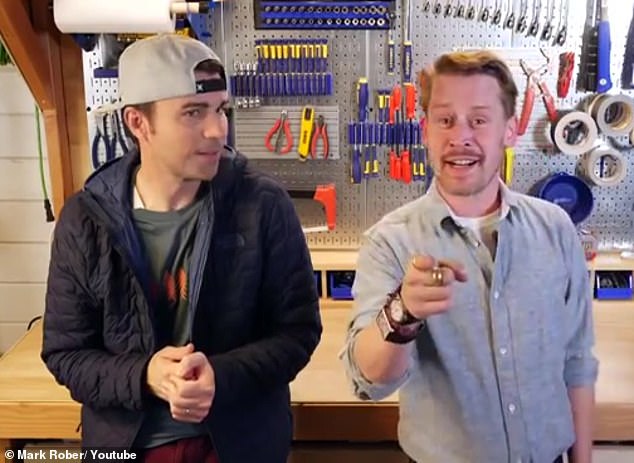 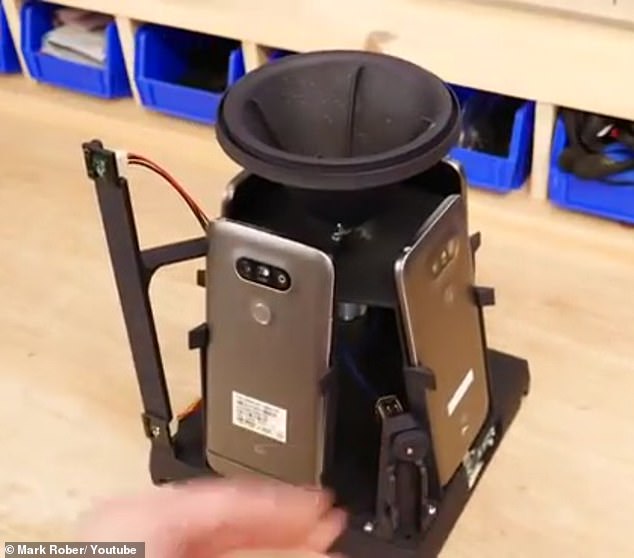 New and imporved: The device, which is dressed up and packaged as Bose headphones, has four cameras to record thieves, a cup at the top that sprays biodegradable glitter, two cans of disgusting fart spray and sound effects

Just in case he doesn’t get his device back, the gadget wizard installed a data chip that uploads the video footage to the Cloud so he can still see the footage of the thieves.

He also installed sound effects this year: a voice that makes a dramatic numeric count down, followed by some fake police chatter.

Once the fake package was all sealed, Rober added a phony shipping label that had the actual address of the Illinois home where they filmed the Home Alone movie. 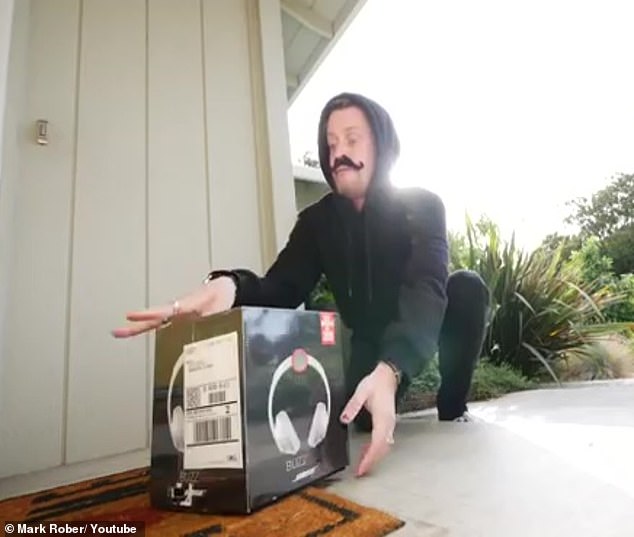 Demo: Culkin put his acting skills on display to show how thieves steal the package off of porches, especially during the holiday season 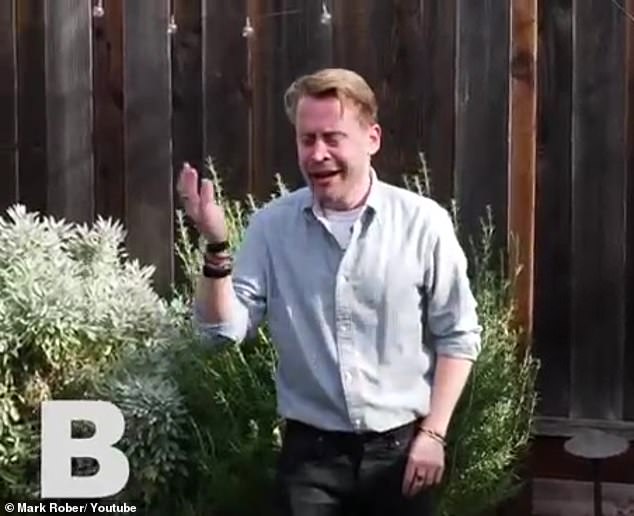 Nasty: The actor was all-too-disgusted when he sampled the new and improved fart spray

Putting Culkin’s skills to use, the actor donned a fake mustache and hoodie to show how people walk up to porches and steal packages, especially around the holidays.

In the follow up clips he demonstrates how a GSP signal, that alerts the four phones inside, begins recording once the package has been moved.

Moments later, the glitter sprays out and the fart smell is put into motion, which Rober called karmic justice.

In the end they dropped off 10 of these bait packages on suburban porches all across the US, all while Rober monitored their location, battery phone levels and camera feeds. 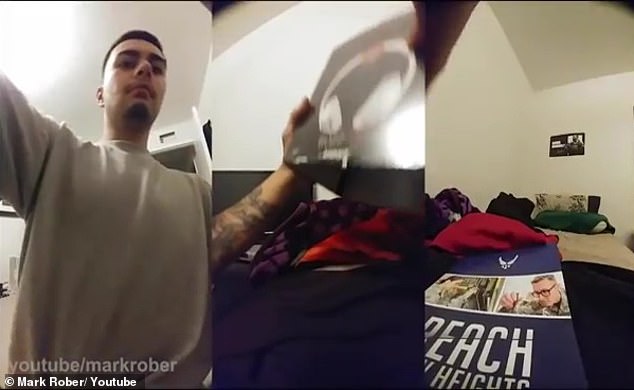 Busted! The four cameras inside the package start recording when thieves take off the box 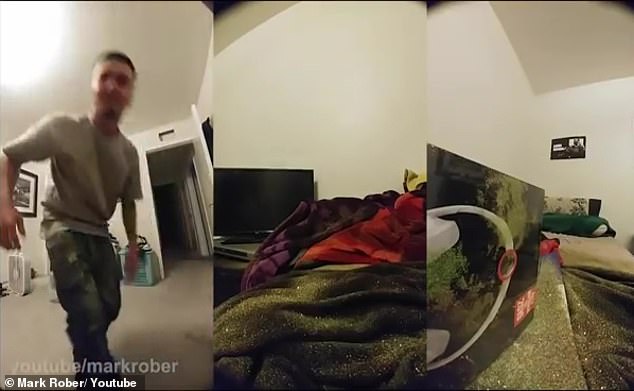 Panicked: The device startles thieves with the spraying glitter, fart smell and sound effect of a numeric countdown and police chatter

The bait package got stolen a number of times, and the thieves’ reactions were all caught on video.

For an added touch of entertainment this year, Rober showcased some of the good Samaritans in the world by placing a few boxes near community mailboxes with real addresses. Anyone who picked up the package, without opening it, and brought it to that real address were awarded $400.

The new video has already made a splash: getting more than 4.3 million views on YouTube in the first half a day of its release. 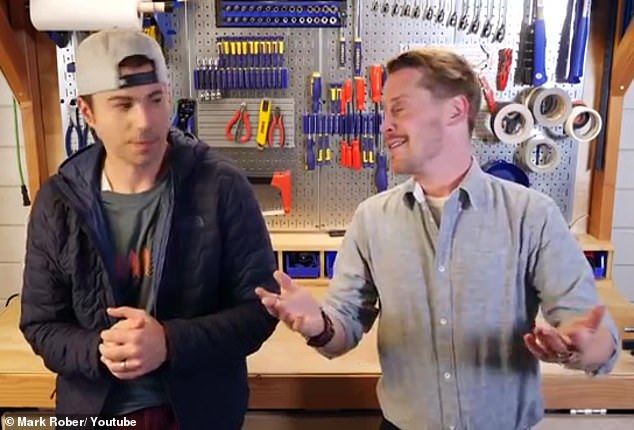 Making waves! The new video has already made a splash: getting more than 4.3 million views on YouTube in the first half a day of its release