Man, 61, left with a severe kidney injury after receiving 1,000 spanks

A man ‘fiercely’ strapped to a wooden bench during a violent sex session suffered a severe kidney injury while he was spanked 1,000 times with a whip and cane.

Doctors say the unnamed 61-year-old suffered the injury because he was squashed against the hard surface, which put pressure on his organs.

They also claim some of the strokes from his anonymous partner went wayward and accidentally struck his kidney area, leaving him unable to urinate.

Luckily, the man – left with deep grazes and bruises on his buttocks and thighs – spontaneously recovered after three days and was able to urinate again.

The first case of its kind recorded in medical literature was published in the British Medical Journal Case Reports by doctors in Stuttgart.

The man was sent straight to Klinikum Stuttgart by his concerned doctor in May last year after tests showed he had a severe kidney injury.

They found his levels of creatinine – a waste product cleared by healthy kidneys – were nine times higher than they should be.

Doctors wrote: ‘During that session, he had been tied up naked onto a wooden spanking bench, with his buttock and thighs facing up and out.

‘He pointed out he had been strapped down very firmly with the ropes cutting into his back and thighs and his organs being squeezed against the wooden bench.

‘He then received a series of violent strokes with both a wooden cane and long whip primarily on his bare buttocks and thighs.

‘He explained the whole session had lasted for about 30 min and that he had received about 1,000 strokes during that time.’

The patient said he had engaged in ‘similar’ activity in the past and ‘regularly experienced’ haematuria (blood in the urine).

However, he had never been anuric (unable to urinate) before. This prompted him to visit his GP, who performed a series of tests.

The man said he was in pain in the areas he had been tied and beaten, his rib cage, buttocks and thighs – and had put on 4.4lbs (2kg) since becoming anuric. 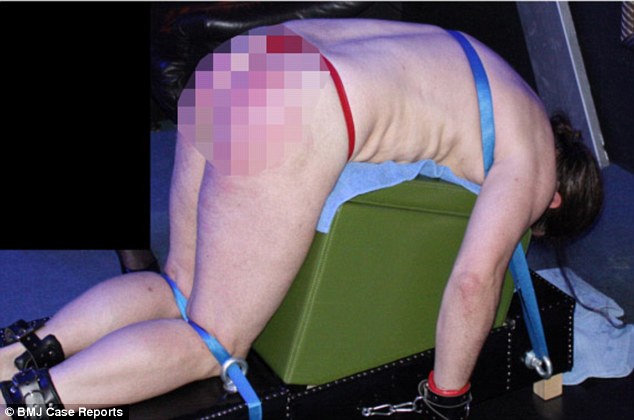 The patient is tied onto a different spanking bench. This one was cushioned, unlike the wooden one he suffered an injury on

‘I had observed my urine to turn dark red afterwards in the past so I was not worried at first when it happened again this time.

‘However, the next day I could not urinate at all, which had never happened before. This concerned me so I went to see my general practitioner.

‘He took blood from me and phoned me later to tell me that my kidney values were dramatically increased and sent me to hospital straight away to be worked up.

‘The doctors there told me about having to take a sample from my kidney and that I may have to start dialysis if my kidneys did not start working again.

‘That really scared me. The whole situation felt strange because I did not feel ill at all but of course, I realised that something was wrong with my kidneys.

‘It took three more days until I started to urinate again and my kidney values finally began dropping again. This came as a great relief.

‘When I learnt three weeks later that my kidney values had gone back to normal, I felt very grateful.

Laboratory tests showed yet another increase in creatinine – 11 times higher than it should be, prompting doctors to conduct a biopsy of his kidney. They warned the man he would have to start dialysis if his kidneys did not improve.

Dr Fabian Echterdiek, author of the case report, revealed the man was spontaneously able to urinate again after four days.

He discharged eight days after he was first admitted, after medics decided he would not need dialysis – the artificial substitute for kidneys.

His blood creatinine levels eventually returned to normal after three weeks and he fully recovered.

They suggested his injury was caused by both intermittent abdominal compartment syndrome and blunt kidney trauma.

They said: ‘As outlined above, the patient reported to have been strapped very fiercely onto a wooden bench, that is, a hard surface.

‘He explained this position resulted in his organs being squashed vigorously onto the bench.

‘We believe this situation may have led to an intermittent abdominal compartment syndrome with critically reduced kidney perfusion.

‘Abdominal compartment syndrome is characterised by an increase in intra-abdominal pressure that is associated with new organ dysfunction/failure.

They added: ‘Even though the patient was primarily hit onto his buttocks and thighs, he acknowledged some strokes may have accidentally hit his back and renal beds.

‘Blunt kidney trauma is well known to cause haematuria and may (temporarily) impair kidney function.’