A man armed with a grenade has taken a senior policeman hostage in the central Ukrainian city of Poltava.

The man pulled out a grenade and threatened to kill police as officers went to arrest him for allegedly hijacking a vehicle.

It comes just two days after 13 bus passengers were taken captive by a gunman in the country during a 12-hour standoff in which he threatened to blow up the vehicle.

Today’s incident saw a junior officer originally taken hostage but then replaced by a more senior police chief who ‘volunteered to risk his life’, according to 112.

A huge emergency response, including explosives technicians and an investigative task force, are working at the site to bring the standoff to an end.

‘The criminal was provided with a car, and now he is riding across Poltava with the hostage, he is accompanied by police officers.’

He added that negotiations are ongoing to force the attacker to surrender to the police without harming himself or others.

It is the second hostage situation to erupt in the Ukraine this week after Maxim Krovishey, 44, lobbed a grenade out of a bus and fired twice at officers after storming the vehicle at around 9.25am on Tuesday in Lutsk, in the northwest of the country.

An assailant, who seized a long-distance bus with 13 hostages, after police officers captured him in the city centre of Lutsk, 250 miles west of Kiev, Ukraine late on Tuesday 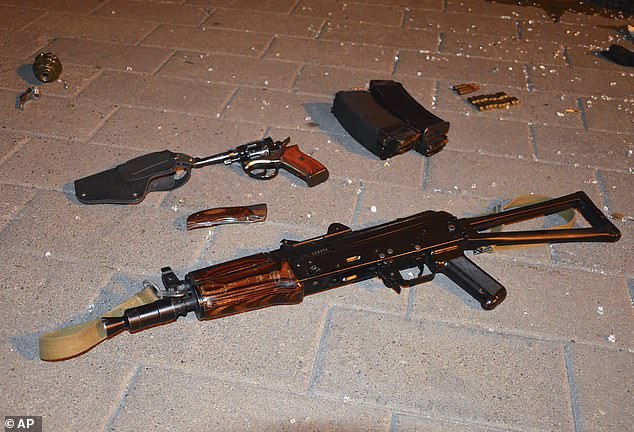 Weapons, including an assault rifle, a revolver, a flick knife and extra magazines, that belonged to an assailant who seized a long-distance bus with 13 hostages on Tuesday, are pictured on the ground 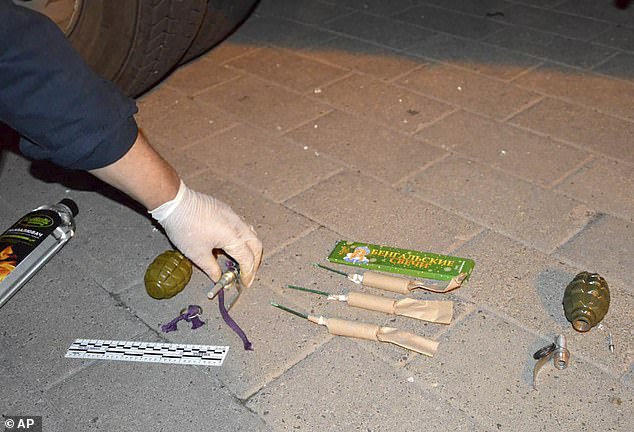 Pictured: A grenade held by the attacker, who launched one of them from the bus at one point in the attack on Tuesday, which fortunately did not detonate

Krovishey spoke over the phone with relatives of those trapped on the bus and threatened to blow up the vehicle unless senior politicians admitted that they were ‘terrorists.’

The gunman – who claimed to have explosives planted in another area of the city – released an elderly woman, a teenager and a young pregnant woman towards the end of the standoff.

At around 9.45pm local time, police announced that the assailant had been detained and that all remaining hostages had been freed without injury.

Interior Minister Arsen Avakov was personally leading negotiations with Krovishey. His deputy, Anton Herashchenko, said the case was being treated as ‘terrorism’.