A Texas man contracted a vile skin infection after he dipped his toes into water at a Corpus Christi park.

Adam Perez, 42, was hospitalized and lost most of the flesh on the lower half of his right leg after his dangerous dip last week, and fears he’ll have a limp for the rest of his life.

He developed vibriosis, a severe bacterial infection that typically causes violent gastrointestinal illness and is contracted most often from eating under-cooked shellfish.

Perez, however, was among the unlucky few to get a skin infection from the bacteria, which snuck into his system through an open wound.

After Adam Perez stuck his toes into some water at a Corpus Christi park, his foot and leg swelled enormously and a giant blister formed, due to vibriosis

Perez had strolled into Waters Edge Park in Corpus Christi and dipped his toes into some water there.

It’s not clear if he was enjoying the park’s fountains or the nearby beach, but it seemed an innocuous move.

And normally it would have been, but Perez didn’t realize that the skin between his toe and toenail was broken.

They’re typically harmless if they come into contact with the surface of the skin.

But if the species is ingested or find an opening via open wounds, they can cause gastrointestinal or tissue infections.

Anyone can get the infection, but it’s much more common – and destructive – among those with weakened immune systems.

Every year, about 80,000 Americans contract vibriosis, and most of them develop the version that attacks the gastrointestinal system, causing food poisoning symptoms like watery diarrhea, cramps, fever, nausea and chills.

About 100 people die of the infection annually in the US.

Alongside Salmonella, vibriosis is the most common infection to result from eating raw or under-cooked seafood or shellfish, including contaminated sushi. 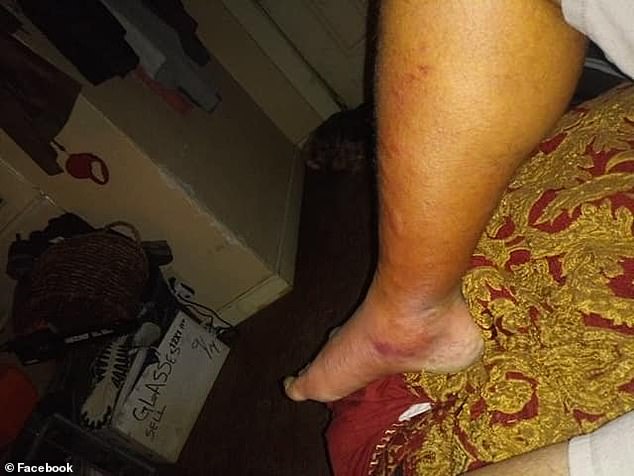 It wasn’t long after his trip to the park that Perez’s leg became swollen and dotted. The bacteria likely snuck into his system through a split between his fungus-infected toenail and toe 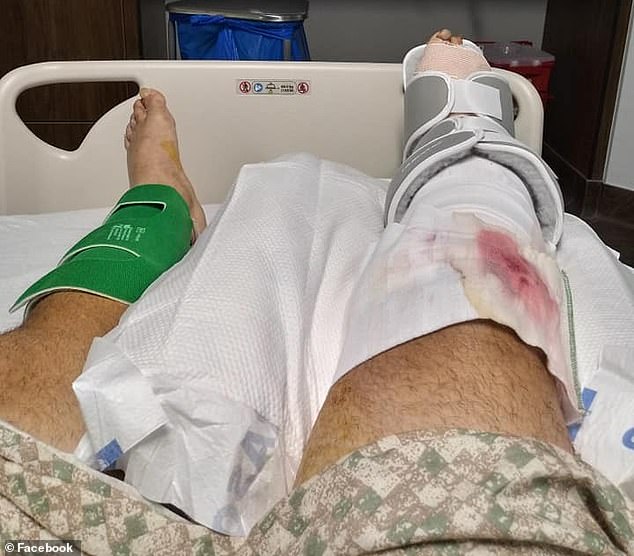 Doctors tried to treat the infection with antibiotics, but after Perez developed an enormous blister, he had to be rushed back to the emergency room to have infected flesh removed

When vibrio infects the skin, it can lead to necrotizing fasciitis, or a flesh-eating infection.

Perez hadn’t realized he’d been vulnerable to the infection because he didn’t see any clear open wounds.

But the bacteria entered his raw toe, and his leg swelled dramatically.

He went to the hospital, where doctors prescribed him antibiotics to knock out the infection and alleviate the swelling.

But it wasn’t long before an enormous blister appeared on Perez’s foot and he was rushed back to the emergency room.

It took at least four surgeries to remove the dying, infected flesh from his right leg, but the operations may well have saved Perez’s life.

‘Really sucks being hospitalized,’ he wrote on Facebook last week.

‘Had surgery yesterday and again today. Another one either Monday or Tuesday. More surgeries coming until healed.’

Relieved to be out of the woods, but concerned for his future, Perez told MySanAntonio.com: ‘I know I’m not going to walk normal.’