Man has cup removed from back after therapy goes wrong

Cupping therapy is usually a relaxing experience however it wasn’t the case for this man in China.

The man surnamed Hu decided to use his home cupping kit on August 22 at his home in Wuhan when things went wrong.

His wife had attached one of the cups too vigorously and it became stuck to his body.

According to reports, the wife had attached the cup to tightly to her husband’s back 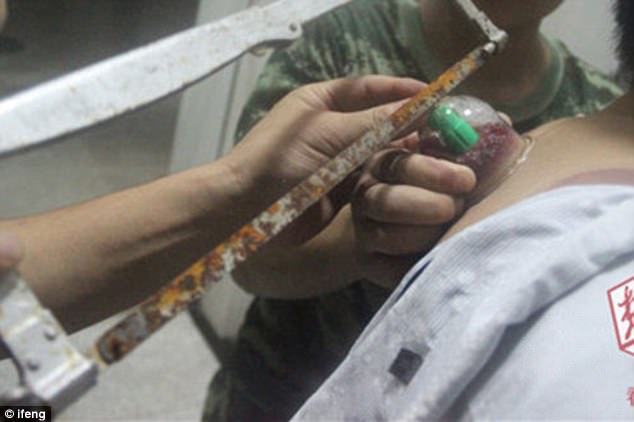 In the end, firefighters had to attend to the man, using a saw to remove it

According to iFeng, the man’s wife had attached the cup too tightly to the man’s back.

She tried to use a hammer to smash the cup off but in the end had to visit a local doctor who advised the man to go to the hospital. However firefighters had to remove the cup first. 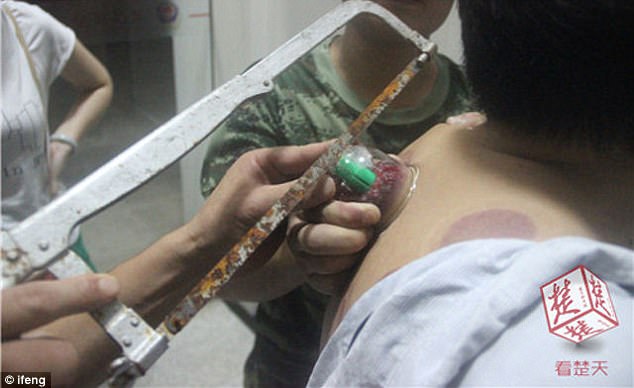 A relief: Mr Hu said he finally felt relaxed after the cup was taken off

Four firefighters arrived at the scene and used a saw to cut the jar.

Mr Hu said he finally felt relaxed after the cup was taken off. He then went to hospital to be treated for the wound.

Cupping is a therapy in which heated glass cups are applied to the skin creating suction and are thought to stimulate the flow of energy inside the body.

This isn’t the first case of a cupping mishap in China.

Last year, photos emerged of a 63-year-old man who was left with seven holes in his back following cupping therapy.

He was promised that the treatment would make his frozen shoulder feel better.

The man surnamed Lin told reporters that he had been having cupping treatment every day in the same place for around a month when large blisters started to appear. 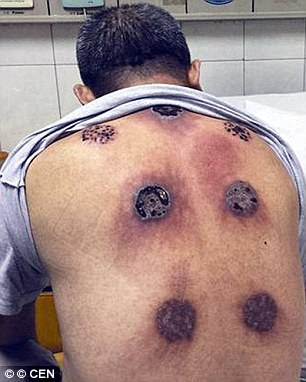 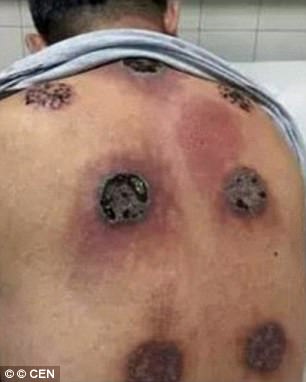 Instead of stopping the treatment, he asked his wife to pop the blisters before rubbing his back with oil.

On June 20, the man went for cupping treatment and during his walk home, he began to feel uncomfortable and had a high fever.

His family rushed him to the hospital.

Surgeon Xie Liang said that when Li was sent to the emergency room with a fever of 37.7 degrees and his back was completely swollen.

On examination, it was found that he had a bacterial infection.

Doctors said that it was lucky that Li came to the hospital when he did as if he had continued then he would have developed sepsis.