Man jetskis across Manhattan’s East River dressed as the Joker

Just another day in Gotham City! Jet skier dressed as the Joker surprises onlookers as he cruises across Manhattan’s East River

A man dressed as the villainous Joker took to the waves on a jet ski on New York’s East River this weekend.

A witness, named Krissy on Twitter, filmed Batman’s archenemy cutting through the waves on Sunday, dressed in white and green clown makeup and a purple long coat – in homage to Heath Ledger’s Joker in the 2008 film The Dark Knight.

‘What the hell?’ a stunned onlooker proclaimed in the footage.

The video shows the Joker riding past the rocky shore in New York City’s Dumbo area, grinning to his audience of passersby.

A man dressed as the villainous Joker (picture) took to the waves on a jet ski on New York’s East River this weekend, surprising onlookers with his amazingly precise costume and daredevil performance 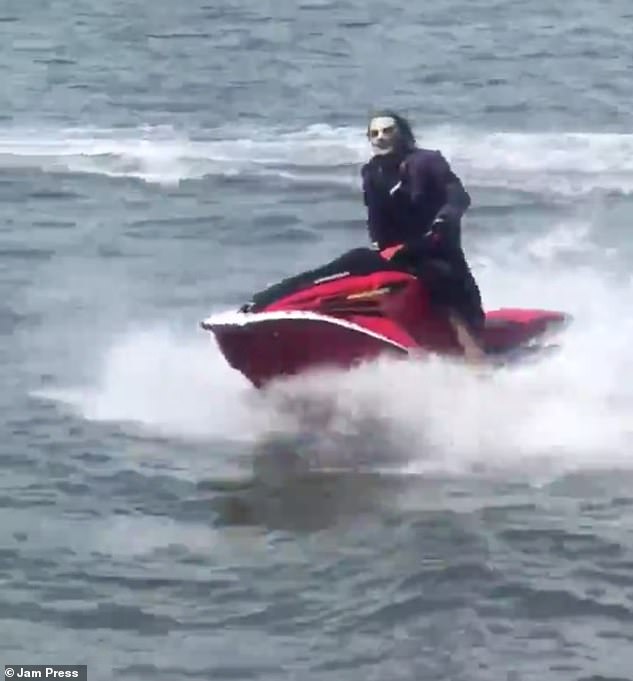 The man dressed as the Joker is pictured in footage taken of his performance, approaching the Brooklyn side of the East River 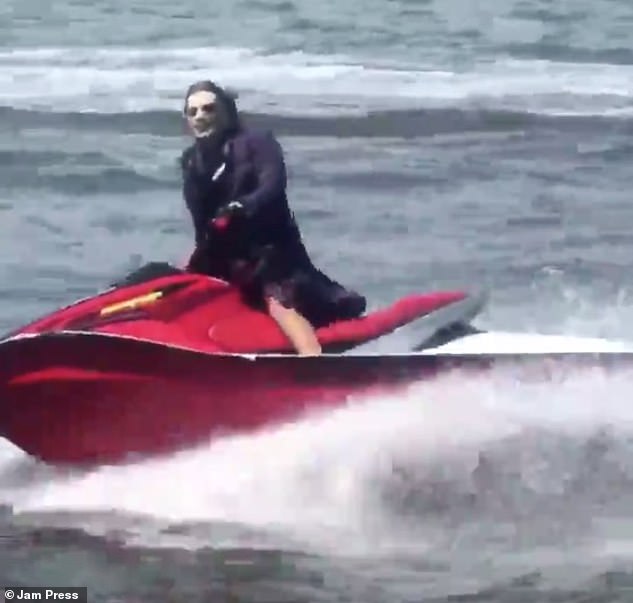 The unidentified man’s appeared on a red jet ski in white and green clown makeup and the Joker’s signature purple coat. Despite getting wet, the costume held up well, as it appeared in the footage taken by onlookers

The joker then turned the jet ski left and skipped across the waves with the FDR Drive and Lower Manhattan, his make up and hair remaining impressively intact despite the water spray.

A Twitter user named Krissy retweeted the footage saying, ‘New York is a strange place man. I think I saw The Joker on water today.’

It also wasn’t the first time someone dressed as the Joker had pulled off the summertime stunt. 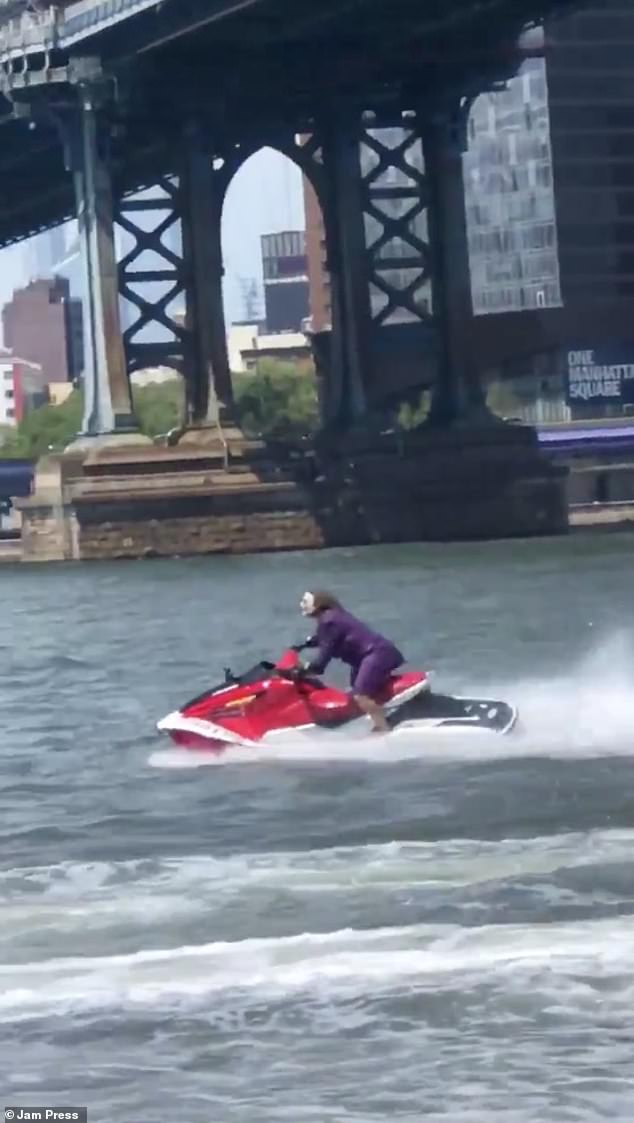 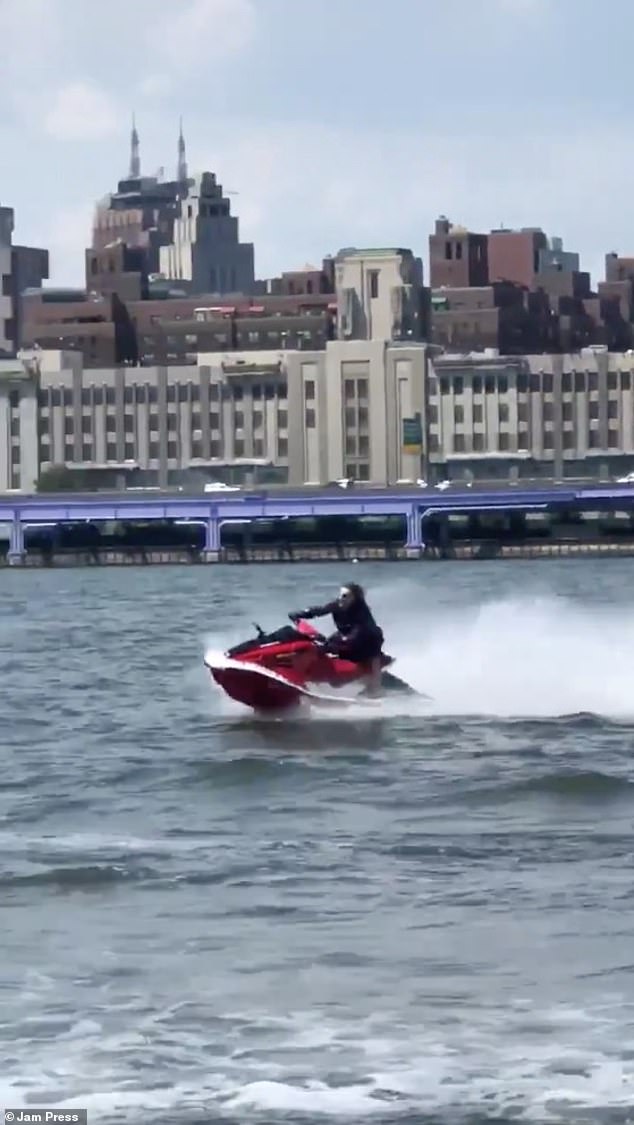 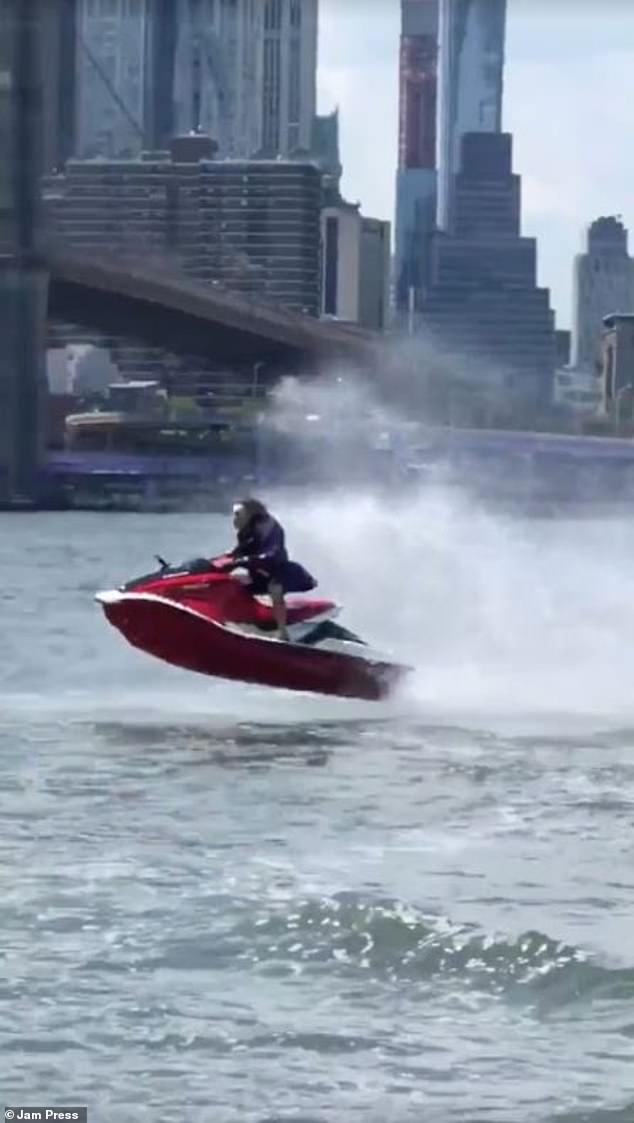 A man was captured in the same makeup and garb in footage posted by Twitter user WhatisNewYork in August 2019.

More recently, Facebook CEO Mark Zuckerberg drew comparisons to the Joker when he appeared white faced while riding an electric surfboard while vacationing in Hawaii.

Zuckerberg, however, was apparently wearing a lot of sun screen and not trying to do his own version of the villain’s look.

Twitter users also dubbed him the ‘mime surfer’ and suggested he had been taking fashion tips  not only from the Joker, but Mrs Doubtfire, a moon and even a lizard.