Marine technician, 27, holds on for dear life when he’s caught on a sailboat during a tornado

Terrifying moment marine technician, 27, holds on for dear life when he’s caught on a sailboat 300 yards off the coast as a tornado hits capsizing and sinking boats around him

A boat technician was left holding on for dear life when the boat he was on was furiously rocked by wind and waves during the tornadic thunderstorm that hit the East Coast.

Marine technician Corey Smith, 27, was working on a boat that was anchored at Pennsylvania’s Chatham Harbour on Tuesday just before 12:30pm when an EF-1 tornado struck the East Coast, bringing with it winds reaching 110mph.

Smith caught the terrifying ordeal on video as he clung to the boat’s hatchway.

Marine technician Corey Smith, 27, was on a sailboat when a tornado struck the East Coast 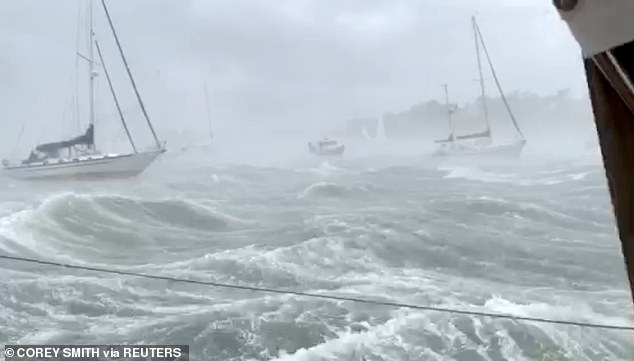 Smith was 300 yards off the coastline as the wind and rain battered his sailboat, ripping boats around him out of their moorings and capsizing them

He can be heard saying, ‘This is insane! Holy s**t!’ as waves crest high enough that they look like they’re about to swamp nearby moored sailboats.

The sky is a soupy grey and the wind and rain dramatically lowers visibility around Smith, who narrates that he can see ‘lines snapping, sails pulling out’ of the nearby boats, many of which lean dramatically to the side, nearly parallel to the water, as they’re blown over by the wind.

‘I hope this guy’s got a good mooring,’ Smith can be heard saying at one point. Later in the video, when it looks like the worst of the tornado has blown through, he can be heard exclaiming ‘woo hoo!’

Smith told CBS Boston that the sky had been blue when he was ferried out to the 42-foot sailboat called Goleen that morning, but at about 12.23pm, the weather changed dramatically.

‘This wall of water was coming right at me,’ Smith told the news station, ‘and it hit the boat like a truck.’ 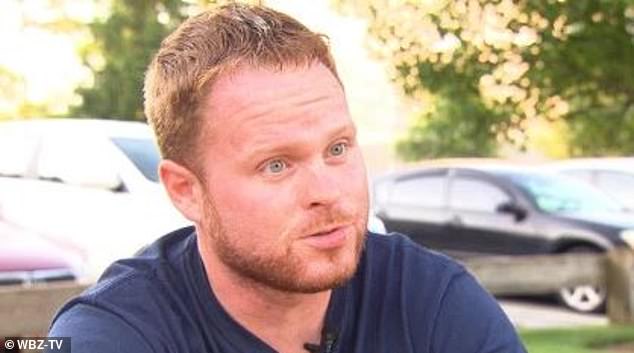 He said he was about 300 yards from the shore at the time and that the first thing he thought when the wave hit was, ‘Oh boy, this is going to go bad really quickly.’

Smith recalled that the boat was capsizing and that ‘Water was pouring over the side of the boat into the cockpit, as waves were crashing against the side.’

Fortunately for him, though, the Goleen stayed upright. Other boats weren’t so lucky as they were ripped free from their moorings and slammed into each other. Some boats capsized and started sinking.

At one point, Smith said that he saw a large fishing trawler heading his way and that it would’ve rammed the Goleen, had it not crashed into another boat first.

As the tornado was battering his boat, Smith said that he though of his daughter, noting that she had ‘gone through too much for me to not make it home to her.’

The whole incident was over in minutes, according to Smith, who called both Mother Nature and the ocean ‘fickle mistresses.’