Mark Hamill shared on Twitter that it was ‘agony’ keeping one of the most famous lines in movie history a secret from his castmates.

The 68-year-old actor responded to a tweet Saturday from a fan who said his acting was ‘so brilliant’ during the famous ‘I am your father’ scene in the 1980 sequel The Empire Strikes Back.

‘I would’ve also liked to have seen the cast/crew’s reaction when they first heard about this epic plot twist,’ the tweet added.

Famous line: Mark Hamill, shown in February in Beverly Hills, California shared on Twitter that it was ‘agony’ keeping one of the most famous lines in movie history a secret from castmates

Hamill, who portrayed Luke Skywalker in the Star Wars franchise, posted a reply.

‘The cast & crew first learned of it when they saw the finished film. When we shot it, Vader’s line was “You don’t know the truth, Obi-Wan killed your father.” Only Irvin Kershner, George Lucas & I knew what would be dubbed in later. Agony keeping that secret for over a year!,’ he replied.

He was referencing The Empire Strikes Back director Kershner, who died in 2010 at age 87, and Star Wars creator Lucas, 76.

Hamill previously shared the plot twist detail in 2017 while appearing on The Graham Norton Show. 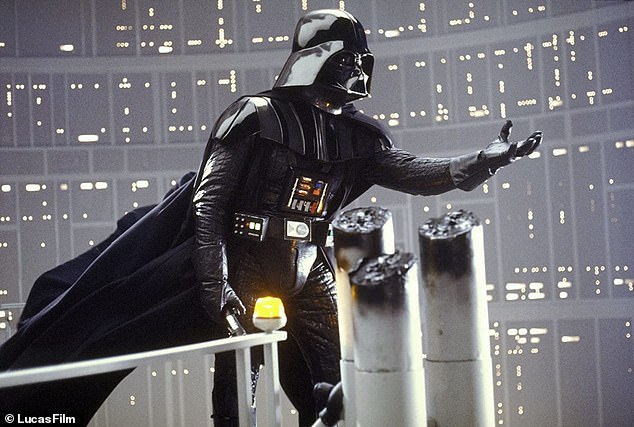 Spoiler alert: Darth Vader is shown in a still from the 1980 film The Empire Strikes Back that features a major plot twist with viewers learning he’s the father of Luke Skywalker 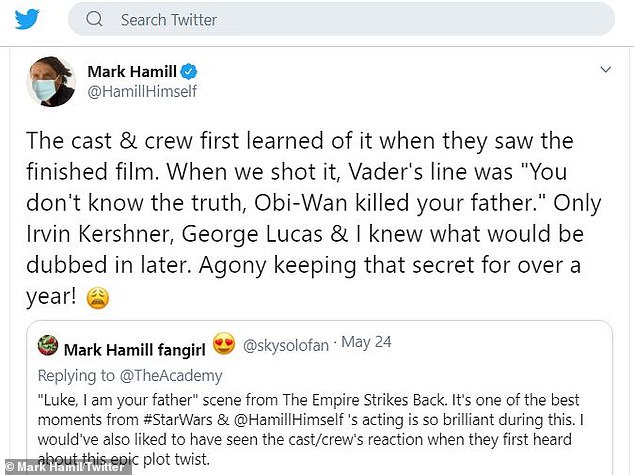 Secret agony: The 68-year-old actor tweeted that it was ‘agony’ keeping the secret for more than a year

‘The director, Irvin Kershner, took me aside, he came to my dressing room actually, and he said, ‘I’m gonna tell you something. I know it. George Lucas knows it, and when I tell you, you’ll know it. But if it leaks, we’ll know it was you,'” Hamill told Norton. “So I said, ”What? What?” and he handed me the piece of paper that said, ”I am your father”.’

Hamill said he kept the secret from his co-stars Carrie Fisher, who died in 2016 at age 60, and Harrison Ford, 77, and they were shocked at the premiere by the revelation.

‘At the screening when that happened, Harrison turned to me and said, ”Hey kid, you didn’t f***ing tell me that”,’ Hamill told Norton. 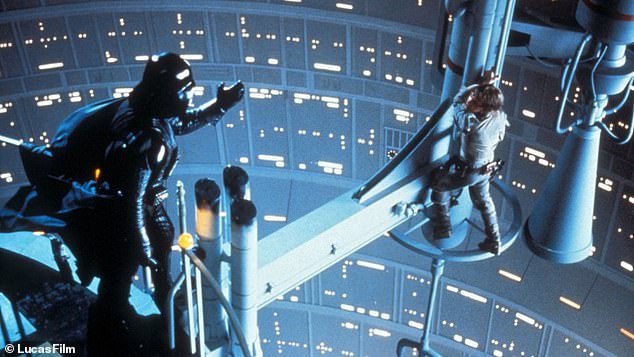 The scene: Hamill said he kept the secret from his co-stars Carrie Fisher, who died in 2016 at age 60, and Harrison Ford, 77, and they were shocked at the premiere by the revelation

‘I apologize for the F-bomb, I only use it for historical accuracy,’ he added.

Hamill played Luke Skywalker starting in the  original 1977 film Star Wars and in its trilogy sequels The Empire Strikes Back and Return Of The Jedi.

He also portrayed the character in the Star Wars sequel trilogy. 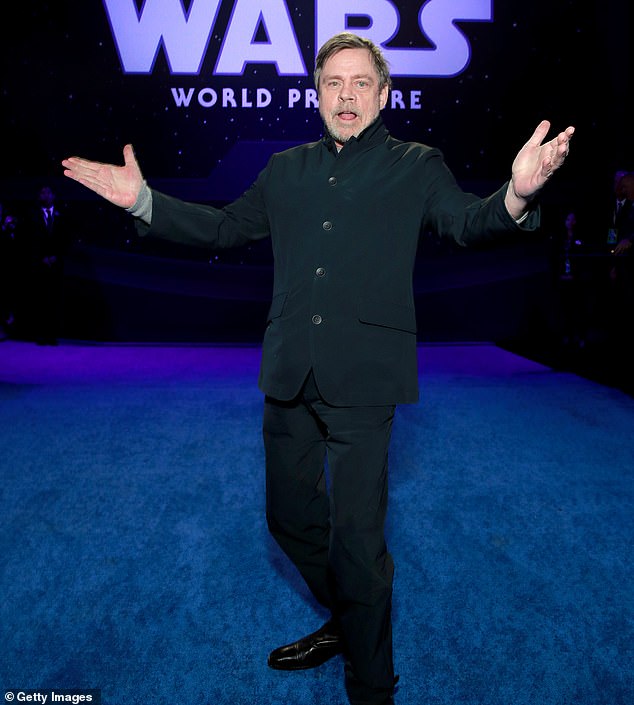 Famous role: The actor, shown in December 2019 in Hollywood, is best known for his portrayal of Luke Skywalker in the popular and lucrative Star Wars franchise