Mark Zuckerberg refuses to give evidence on Facebook scandal

Mark Zuckerberg agreed to give evidence to US politicians tonight just hours after enraging British MPs by snubbing a Commons inquiry.

The Facebook chief will face renewed fury in Britain over his refusal to personally take part in a parliamentary probe into the Facebook data breach.

Sources have told CNN the multi-billionaire had decided he would speak as demands from senators and members of Congress that he testify piled up.

Instead of talking to UK politicians, he has instead offered to send a ‘deputy’ to explain the firm’s handling of the crisis.

In a letter to Culture Committee chair Damian Collins, Facebook said it recognised the ‘public interest’ in the row and that it should be addressed at the ‘most senior levels of the company’.

But Public Policy head Rebecca Stimpson wrote: ‘Mr Zuckerberg has personally asked one of his deputies to make themselves available to give evidence in person to the committee.’

Speaking this afternoon after the committee took three and a half hours of testimony from whistle-blower Christopher Wylie, Mr Collins said: ‘I think it is absolutely astonishing that Mark Zuckerberg is not prepared to submit himself for questioning in front of a parliamentary or congressional hearing, given that these are questions of fundamental importance to Facebook users as well as to our inquiry.

‘I would certainly urge him to think again if he has any concern for the people who use his company’s services.’

Facebook has been hit by a storm over its links to the political analysis firm consultancy Cambridge Analytica.

Zuckerberg issued a mea culpa last week after the social media giant saw its shares plummet by 13 per cent. 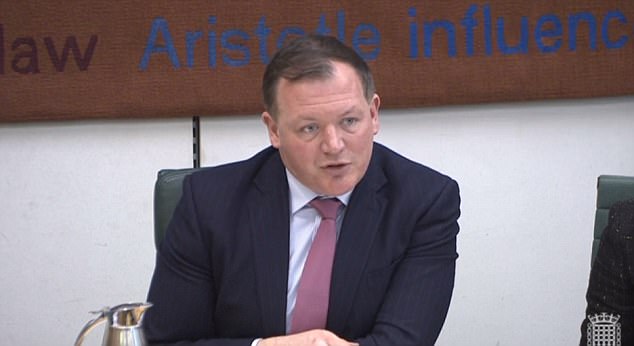 An app downloaded by 270,000 people is said to have allowed access to tens of millions of their contacts.

The information was then allegedly passed on to Cambridge Analytica, which worked on Donald Trump’s 2016 presidency campaign.

Government officials moved in on Cambridge Analytica’s offices in London last week, taking vans full of evidence with them for further examination.

Facebook ran full-page ads in major British and US newspapers to say sorry.

But the apology did not mention Cambridge Analytica.

Damian Collins, chairman of the DCMS committee, accused Facebook of previously misleading the committee by understating risks posed by firms who harvest vast swathes of personal data from millions of users of the social network. 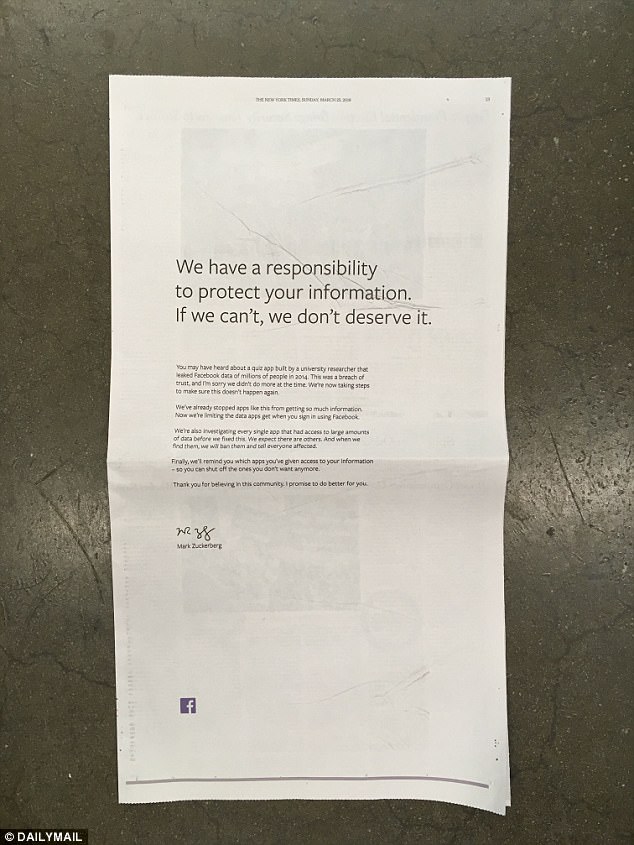 Mark Zuckerberg has taken out full-page ads in nine major US and British newspapers to apologize for the Cambridge Analytica scandal. Pictured is the New York Times on Sunday

In a letter to Mr Zuckerberg on March 20, Mr Collins said: ‘It is now time to hear from a senior Facebook executive with the sufficient authority to give an accurate account of this catastrophic failure of process.

‘The committee has repeatedly asked Facebook about how companies acquire and hold on to user data from their site, and in particular about whether data had been taken without their consent.

‘Given your commitment at the start of the New Year to ‘fixing’ Facebook, I hope that this representative will be you.’

‘Both Chris Cox and Mike Schroepfer report directly to Mr Zuckerberg and are among the longest serving senior representatives in Facebook’s 15 year history,’ the letter said.

‘Both of them have extensive expertise in these issues and are well placed to answer the committee’s questions on these complex subjects.

‘One of them can be made available to the committee straight after the Easter Parliamentary recess, depending on the committee’s preferred timing.’