Marmite can curb symptoms of stress and anxiety

You either love it or hate it.

But new research suggests you should have no qualms about Marmite – the spread famed for its bitterly divisive taste.

Starting the day with a slice of toast covered in the dark brown paste can help to battle stress and anxiety, scientists found.

Marmite’s supposed benefits stem from its abundance of vitamin B – deemed to be ‘important’ in alleviating mental pressure.

The findings, made by researchers at the University of Victoria, Australia, are the latest in a long-line of Marmite’s supposed benefits.

It follows a disputed British study in April which discovered the vitamin B-packed spread may help prevent you getting dementia.

While over recent years, other scientists have claimed it can help to prevent birth defects and even cure blood problems.

The new research, published in the Journal of Functional Foods, was based on the answers of a survey of 520 participants. 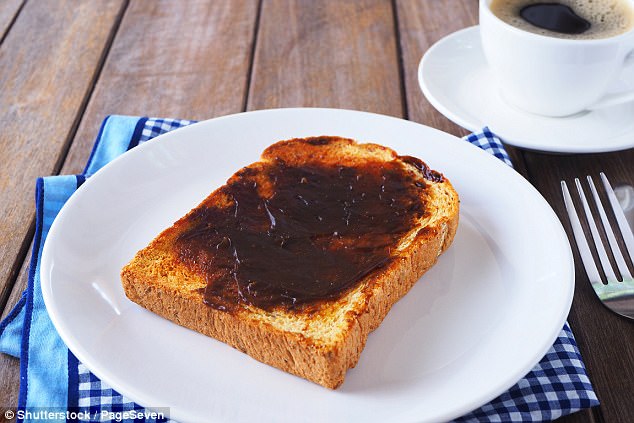 Starting the day with a slice of toast covered in Marmite boosts a chemical vital to ‘calm’ the brain, York University researchers said in April.

Eating a teaspoon of Marmite a day for a month was found to tone down the brain’s response to visual stimuli by 30 per cent – a sign of a healthy mind that is not hyperactive and overreacting.

That is because it contains vitamin B12 at more than 100 times the level found in another popular spread, peanut butter.

When 28 people were given the spreads, although some hated Marmite, it appeared far better for their brain than the peanut butter – even eight weeks after eating it.

Writing in the journal, the scientists said: ‘Vitamin B supplementation appears to be an important additive supplementary source to improved stress and anxiety.’

Volunteers were quizzed about their consumption of yeast-based spreads, dietary habits and symptoms of stress, anxiety and depression.

Researchers found a ‘significant improvement’ in anxiety and stress for those who consumed yeast-based spreads.

However, no beneficial effect was discovered for those with depressive symptoms.

The results also found vitamin B12 fortified yeast-based spreads, such as Marmite, packed a stronger punch.

Invented in 1902, Marmite was discovered by a German scientist called Justus von Liebig who found that brewer’s yeast could be concentrated, bottled and eaten.

The results follow a study published in September that revealed whether someone likes the taste of marmite is based on their genes.

Data obtained by the makers of the spread made the conclusion after testing 260 people. It found 15 genes can predict if someone will like the paste.