Marriage a nightmare? Blame it on your brain!

By James Walton For The Daily Mail

The good news, according to Dean Burnett’s fascinating new book, is that on the whole our brains want us to be happy. The bad news is that they often go about it in a rather clumsy way.

Take the phenomenon known as ‘optimism bias’: the deep-seated human belief that things will turn out just as we’d like them to.

This is obviously useful for getting us out of bed in the morning. On the other hand, what if things don’t? Surely that’ll only make the disappointment worse?

The answer, it seems, is that the brain tries to protect us from a sense of failure, sometimes in the form of a kindly bout of amnesia.

Imagine you’ve taken a boring office job to fund your plans of becoming an Olympic gold medallist. Once it’s clear you never will, your brain is liable to decide that, actually, the job was something you wanted to do all along — that Olympic stuff was ‘just a childish dream’.

Alternatively, the brain can simply make us persist in our original beliefs, despite all evidence to the contrary.

‘Have you ever wondered,’ asks Burnett at one point, ‘why people stay with partners who are, to put it mildly, dreadful?’

Well, that’s because our brains know that love makes us happy, so they’ll ‘go to extreme lengths to keep us loving someone, even if that’s logically a very bad idea’.

Burnett’s central point is that the route to happiness is extremely tricky to plot. Luckily, this doesn’t prevent him from giving it a thoroughly good go. As well as a professional neuroscientist, he’s also a stand-up comedian — and here, he neatly combines the two jobs to give us a book that’s both endlessly thought-provoking and richly entertaining. 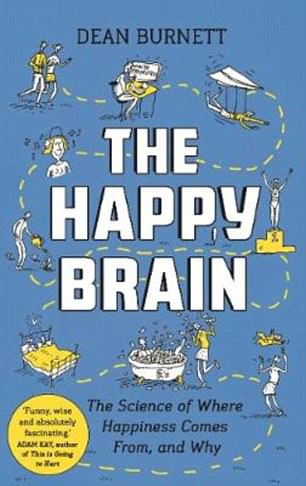 While no one thing can guarantee happiness, there are some that make it more likely: these include a safe home; work that makes us feel valued; and enough money to avoid financial anxiety. Above all, though, there’s other people.

We evolved to be social animals, whose safety from predators came from being part of a group. ‘Our supposedly logical brains treat being accepted by others as a matter of life and death; as far as they’re aware, it is.’ It also explains why laughter is contagious, why solitary confinement is so cruel and why peer pressure is so powerful.

Burnett provides a full scientific account of what goes on in the brain when we fall in love: in love’s early stages, the ‘areas responsible for critical thinking and threat detection are suppressed’; production of serotonin is reduced, making it hard to sleep and giving us palpitations.

The psychological upshot is that being crazy about somebody isn’t very different from simply being crazy.

More surprisingly, the brain is often rather old-fashioned about sex. Faced with, say, the drunken advances of a best friend’s spouse, the orbitofrontal cortex (commonly known as ‘the conscience’) springs into action, calculating the consequences and curtailing sexual behaviour.